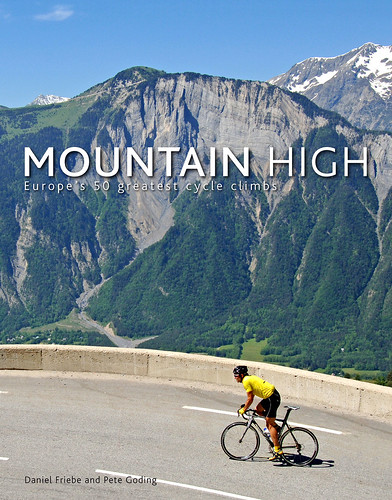 I could just say this is a great book that is well-researched and complete with stunning photographs. But there’s plenty more to add.

Cycling journalist Daniel Friebe and photographer Pete Goding cover 50 climbs that feature in the sport. This isn’t “The 50 Best Climbs”, nor a ranking of the hardest roads in Europe, instead it’s just a collection of 50 great climbs, if you can see the distinction.

They go in order of altitude, starting with the Koppenberg that sits proud of the sea by just 78 metres and finishing with a road considered too high for cycling in Europe, the Pico de Veleta that tops out at 3,384 metres. In between there are some classics of the sport, usual suspects like La Redoute in the Ardennes, Mont Ventoux, the Tourmalet, the Galibier, the Stelvio. But there are more, including surprises chosen for aesthetics and beauty.

Each climb gets a few pages of stunning photography, history, anecdotes as well as a “fact file” that locates the climb and offers notes on the length, gradient and a profile. The writing is well-researched and goes beyond pro cycling. Friebe often provides the history of a pass, how it was used by smugglers or built under the orders of a dictator, king or emperor. Pioneers like Edward Whymper are cited and there are quotes from early travel books too, recalling the days when these high passes were an adventure instead of a transport artery. With a bike of course they remain an adventure.

There’s also regular acknowledgement that the Alps are not simply “the Alps” but encompass a vast area of Europe. Care is taken to distinguish one range of mountains from another, right down to identifying the geology, for example the Col d’Izoard has “sepia-coloured spires of cargneule rock”. Now it’s not a book on rock formation but this detail ensures each climb is more than a side profile of gradients and anecdotes from past races.

The photography is impressive. At first you look at the double-page spread of a mountain pass and try to spot the rider in Rapha kit. But most photos feature no cyclists, just the road winding up a mountain. Goding has a tendency to look for the human legacy in a landscape, for example photographing Mont Ventoux with a series of snow poles that mark the edge of the road in the foreground, or contrasting snaking tarmac against the loose rockfalls or creeping foliage. It works and highlights the obvious contrast of road cycling in the high mountains, that for all the adventure and escape, we are reliant on an engineered grade and in most cases, flawless tarmac.

Indeed one of the best things is that the book explains each climb. In the midst of a race a mountain can be reduced to a series of ramps and gradient percentages but this book provides helpful context. If you are used to images taken during the Tour de France with the crowds, motos and helicopters then this book shows the mountain passes as they are for the rest of the year, with open landscapes that are often desolate and lonely.

Is there anything bad to say? A reflex in me says a review has to be critical. Well I’ve spotted a few typos. And some might want to make alternations to the list of 50, deleting one or two climbs to replace them with others but that’s subjective. The book glamorises the mountains, almost making them look easy. A patch of snow by the roadside lends light to an image but just remember if you were on the road it would signal frozen fingers and damp clothing ahead of a 20km descent.

Summary
An appealing book that marries the mountains, pro cycling history and cycle touring into one. It could incite wanderlust, an impulsive urge to visit these climbs. But if you can’t make it, this book is the next best thing.