As the ninth part of a series to explore the famous roads of cycling, here is the Croce d’Aune on the edge of the Italian Alps. The idea is to discover the road and its place in the world, whether as part of cycling’s history or to look at the route on a day without racing and it is open to all.

The Croce d’Aune isn’t the highest road nor the hardest. But it has been a place of disaster and invention and it is in a scenic ride in its own right. If last week’s piece on France’s Col de la République was partly a celebration of the derailleur, the Croce d’Aune is the birthplace of the quick release lever and more. In fact a wheel change on this climb arguably led to the invention and perfection of modern cycle componentry as we know it today. 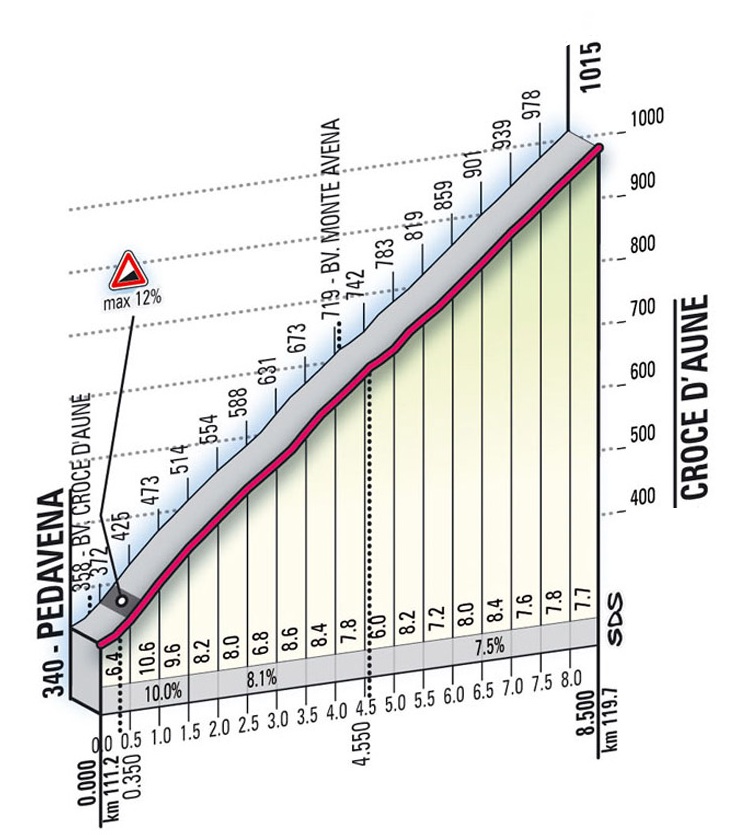 The SP473 Via Croce d’Aune climbs out of Pedavena. It is 8.5km long and averages 7.8%. There are other routes to the top from the other side but this is the most famous route. Some steep ramps mark the start of trhe climb but after one kilometre the road steadies to a regular grade and via a series of ramps and hairpins, tracks the flanks of a valley to the top.

The Feel
This is a quiet and ordinary road, you could be almost anywhere in Italy, the Alps or the Apennines. It’s scenic and wooded with views of the high mountains around. It’s a pleasant climb although the steep start steals momentum and rhythm. Daniel Friebe’s Mountain High has it right:

An unremarkable mountain pass, overhung and overshadowed by many higher and more magnificent Dolomite peaks, submerged in woodland and, it seems, anonymity.

The road is wide and there’s not much traffic because if the route serves villages above Pedavena, most of the traffic takes the larger and easier roads in the Cismon valley. As you approach the top the views open up and the road zigzags to scale the final part of the ridge that marks the pass. But if this climb is not fearsome nor legendary for the racing it is still satisfying. Pace yourself and it’s a fast climb that satisfies because you can tame it. It feels fast, this is not 90 minutes of Stelvio-esque introspection and exhaustion, no, you’re in charge here.

The Birth of Campagnolo

An engineer and cyclist Tullio Campagnolo liked to tinker with bikes, even building his own frames. On 11 November 1927 – Armistice Day – he was leading the GP della Vittoria up the Croce d’Aune but needed to change gear. Unlike Velocio in France, Campagnolo was riding a more traditional bike where the gear was changed by reversing the back wheel. Each side of the hub flange had a single speed gear, one side for uphill and one for downhill and the rider would stop, undo the wing nuts, flip the wheel 180° and lock the wheel back in place. It took 30 seconds for the skilled rider. But Campagnolo was riding in bitter cold and his hands were numb. His fingers could not turn the nuts and as his rivals passed him he uttered the legendary phrase:

That change was the quick release lever. Campagnolo spent time working in designs and models but invented the quick release lever which is still used today, proving the maxim of necessity being the mother of all invention. Campagnolo set up a company and with the quick release lever being highly sought after moved to perfect gearing. First came the Cambio Corsa, a system with two rods on the rear seat stay used to shift the chain from sprockets on the rear wheel. No longer did the rider have to change wheel. Although this was not a new invention it was a big improvement. But the leap came in 1949 when Campagnolo launched the Gran Sport groupset. Here a whole range of products were offered including an efficient parallelogram rear mech. Others, like French company Huret, offered components but Campagnolo flourished.
Tullio Campagnolo died in 1983 but the Vicenza company launched the Croce d’Aune groupset in commemoration.

At the top of the pass there’s a memorial to Campagnolo and the incident of him standing next to his upturned bike is commemorated.

The Giro
The climb has featured in the Giro, notably in the 100th edition in 2009 but as it’s not the toughest climb it’s not proved decisive for the race. The climb is also a descent in the Gran Fondo Sportful. For years the ride was known as the Gran Fondo Campagnolo so this climb held a special place in the route although given it features at around the 200km point few riders would celebrate the moment. The climb is also home to a motorsport hill climb where the fast ramps and tight hairpins make it a good test of engine and driving skill alike.

The second C is soft so it’s “crow-chey” and d’Aune is “Down”. It sounds like an Italian saying “crouch down”.

The Beer, the Campaign, The Election 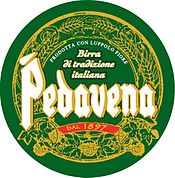 The start town of Pedavena is home to a brewery that’s a tale of the Italian economy and today’s elections all in one go. Started in 1897 the firm was sold to Dutch brewing giant Heineken and then closed by the owners in 2004. Local protests saw signatures gathered and the comedian and satirist Beppe Grillo got involved. “Nobody can touch the brewery” proclaimed Grillo on his popular blog. It wasn’t the start of Grillo’s campaign but it was a transitional stage and today he’s standing for election in Italy’s parliamentary elections. In 2006 the brewery was reopened with local capital and workers to make Birra Pedavena independently. It’s worth a visit as it’s more than some tanks, the place glistens with shiny copper and brass and a beer hall with an arty touch than a drinks factory.

Access
Feltre is a good place to stay being scenic and welcoming. The Croce d’Aune is worth riding in its own right but also because it leads you into the Belluno national park in the Dolomites. The whole area offers excellent cycling with Monte Grappa as the backdrop. There’s the Passo Duran, the Passo di Rolle and much more within range and you can reach the San Pellegrino pass (not to be confused with the other place in Lombardia where the bottled spring water comes from) and the mighty Passo Pordoi.

If you visit and the weather is bad then there’s still plenty to do as the area is home to a lot of Italy’s cycle manufacturers. Wilier Triestina are near in Rossano Veneto, Campagnolo is in Vicenza, in the nearby Treviso you will find Pinarello. The Veneto region is also the place to pick up accessories as it’s the home of backwards shoemakers Sidi and Gaerne as well as Northwave and Diadora. It’s also the birthplace of Luxxotica, the Italian company that owns Oakley. And if you or others want some non-cycling gear then the area is home to Benetton, Diesel, Marzotto and Stefanel too.