Bear with me a minute as I’m not saying Italians shoemakers are old fashioned. Instead here’s a quick explainer on cycling shoemakers Sidi and Gaerne and their surprising similarities.

Sidi began trading in 1960, that’s the first HQ in the photo above. It made hiking boots but within a decade moved into production of cycling shoes and motorcycle boots and today the brand is equally famous in cycling and motorsport. It’s based in the small town of Maser, a place of just 5,000 people in north-east Italy, in the Veneto region.

Similarly Gaerne also makes cycling shoes, motorcycle boots and hiking and hunting boots. It too is based in Maser, in fact just a few hundred metres away from Sidi’s factory. 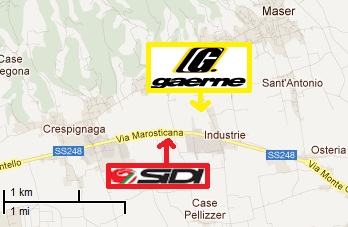 If this isn’t coincidence enough, here is the reason for the “backwards” nature of these companies:

Obvious when you see it, no?

Talking cobblers
If they come from the same town and share similar naming techniques this is not just coincidence. The Veneto region is responsible for 70% of Italian sports shoes and it’s home to the likes of other cycling shoemakers like Diadora (owned by Geox) and Northwave.

Export strength
80% of Italian sunglasses come from the region, it’s where Luxottica was founded, the Italian company that today owns Oakley and Rayban. Brands like Benetton, Diesel, Marzotto and Stefanel come from the region. Pinarello is just a spin away from Sidi and Gaerne, Willier Triestina and Campagnolo are nearby too.

Indeed much if Italy’s economic wealth – it is the seventh largest economy in the world – comes from businesses like Sidi and Gaerne. They are perfect case-study examples of businesses that started in Italy’s post-war boom, that remain family-owned and rely on craftsmanship and design to export a large share of their production.

Sidi's factory today: the only thing backwards is the name