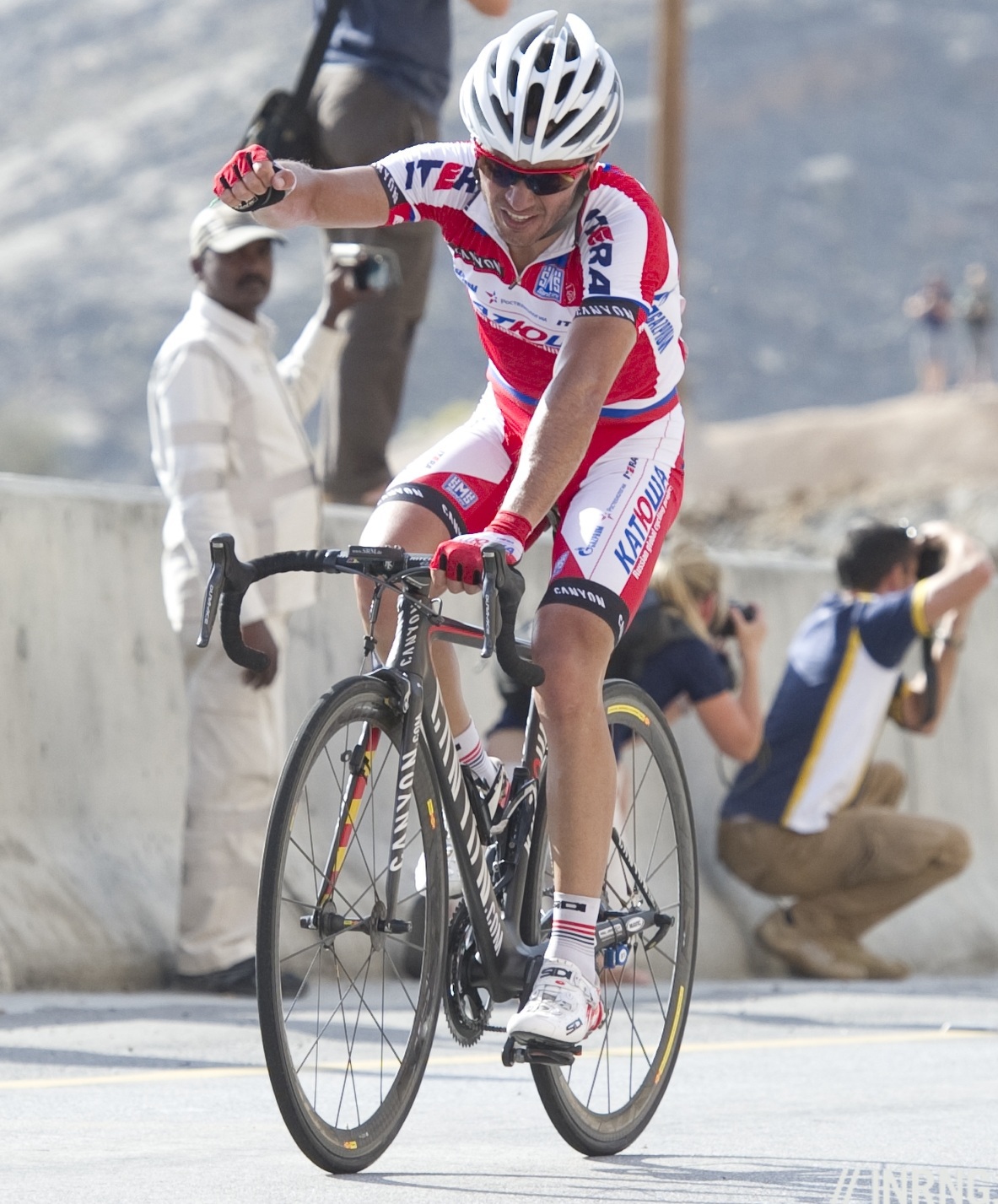 Joaquim Rodriguez won the Queen Stage of the Tour of Oman today but his future and that of his team is being decided this week. The latest is that Switzerland’s Court of Arbitration for Sport (CAS) will announce its verdict on the Katusha team tomorrow morning. The Russian team was surprisingly ejected at the eleventh hour from the UCI World Tour with little explanation given.

The shocked team appealed the decision. What can we expect from this verdict? It seems the team has the odds against them but if they do win it could turn undermine the very concept of the World Tour. Here’s a look at the likely scenarios, the rules and more.

First, what happened? Well nobody knows. The UCI has a Licence Commission (LC) which is very independent. Some have suggested the UCI leaned on the LC to kick out Katusha, perhaps because of a power struggle between Pat McQuaid and Igor Makarov, the Katusha team boss who’s also a member of the UCI’s management and a man with ambitions. But the LC is very independent thing, it sits outside of the UCI HQ in Aigle and is staffed by non-UCI people including a Swiss high court judge. Put another way it’s very hard to lean on them. Even the team says it doesn’t know why it lost out. Speaking to cyclingnews.com team manager Valerio Piva said:

“We don’t know anything beyond what came out in the UCI’s official communiqué, so we don’t know any more than anyone else. We haven’t had any clearer information than that so we still don’t know why they turned us down for the licence.”

This is strange because the UCI has sent the full details to the team. Perhaps Piva just wasn’t aware? The team would have to know in order to make its appeal.

What seems likely is the team failed the ethical component of the licence requirements. There are four pillars: sporting, administrative, financial and ethical. We might think of ethics in terms of behavioural things but for the UCI it is more

The ethical criterion takes account inter alia of the respect by the team or its members for:
a) the UCI regulations, inter alia as regards anti-doping, sporting conduct and the image of cycling;
b) its contractual obligations;
c) its legal obligations, particularly as regards payment of taxes, social security and keeping
accounts;
d) the principles of transparency and good faith.

As we see it stretches into contractual and legal matters. It’s here that I believe the Katusha team had problems.

Either way in the interim the team has been granted a pro continental licence which I found odd: if you don’t meet the ethical standards for one level does this mean lower levels have lower standards? In fact the rules are the same for both levels. Perhaps what changed is that the team came back and presented better documents?

What next?
Katusha’s problem is that if they came back with new documents to get a Pro Continental licence then this doesn’t count for the World Tour appeal.

There are rules set out by the UCI to govern licence appeals. In summary any appeal has to be on the basis of the facts presented at the time of the original application.

The economist John Maynard Keynes once quipped “When the facts change, I change my mind, what do you do Sir?” only the CAS appeal does not allow for this. Here’s the UCI rule:

2.15.240 The appeal is judged on basis of the licence application documentation as it stands at the moment when the licence commission has taken its decision.

So the appeal can only revisit the judgement made at the time. Imagine a team with incomplete paperwork or insufficient money being rejected. It can’t come back at the appeal with the correct paperwork or a sack of gold to say things are fixed. Only the ruling and the facts presented at the time count. In fact only specific things can be ruled upon by the CAS. Here’s the UCI rulebook again:

2.15.239 The CAS shall examine only whether the contested decision was arbitrary, i.e. whether it was manifestly unsustainable, in clear contradiction with the facts, or made without objective reasons or subsequent upon a serious breach of a clear and unquestioned rule or legal principle. It may only be overturned if its outcome is found to be arbitrary.

That means the decision can only be overturned if the LC ignored the facts or made some clear mistake. If the LC had reasonable grounds to reject Katusha then these can still stand.

The CAS hearing room, aka the finish line

What happens next, part 2
Based on this my feeling is that the odds are against the Russian team. But long or short, let’s explore what would happen either way.

Katusha Lose: we’d see the status quo as it is now. There are no more routes to appeal this so that’s that for 2013 at least until the team, if it wants, could reapply for a licence for 2014 and beyond. Currently the Russian team has a Pro Continental licence and would need to rely on wild card invitations for the big races. These have not been as easy to get as the team might want but the stability of the situation could mean the Tour de France smiles on them, especially if star rider Joaquim Rodriguez promises to stay. He’s responsible for most of their wins and Christian Prudhomme won’t want Katusha to show up in Corsica without him. But there’s talk he’ll go to Lampre to fill the boots of 2011 Giro winner (and double Ferrari and Fuentes client) Michele Scarponi who is currently suspended pending a hearing timed suspiciously to coincide with the CAS.

the CAS shall make a new decision that shall replace the contested decision. This decision shall settle the case definitively. No further appeal shall be admitted.
However should the annulment of the contested decision open the way to a new allocation of the licences or a new award of a licence for which there is more than one candidate, the case shall be returned to the licence commission. After consulting the parties, the commission may, if it considers that it is in possession of adequate information, renounce any further documentary submissions and/or hearings. The case shall then be adjudged on the basis of the licence application documentation as submitted to the commission on the occasion of its initial decision.

In summary the CAS gets to say what happens, if Katusha wins the appeal then the CAS rules on what happens, it’s not for the UCI to decide things. But the wording above suggests the LC could be faced with the prospect of revisiting the decision it made, to re-admit Katusha but also to reject another team, probably Team Saxo-Tinkoff, Argos-Shimano or FDJ. This would be farcical, ejecting teams that have been planning for the year and it would totally undermine the concept of the World Tour and it’s ProTeam licensing structure whereby teams and sponsors are supposed to get some security

The most elegant solution would be to have 19 World Tour teams for 2013 but this would be imperfect as races would have to bump off a wildcard invitation. Or perhaps just have an extra team, eg 23 teams in the Giro. This means a large field size beyond the UCI maximum which is a safety issue but also a logistical problem hotels would have to be found for extra riders and staff for the races.

Summary
A lot of rules but it comes down to the decision made at the time. It doesn’t matter what the team has done to change its ethical issues, the CAS is instructed only to review the matter only in the light the facts and evidence submitted back then. This makes things hard for the team, the Licence Commission is composed of heavy-hitters and I know from well-placed sources that they don’t review things lightly. On this basis alone I think Katusha could lose the appeal. But that’s a guess.

If Katusha lose things will stay the same but if they win the appeal then everyone will be guessing as the UCI might have to go back and eject a team from the World Tour. But this just sounds too fanciful. Mind you, this is pro cycling.