Gerard Vroomen raises a very good point on his blog that others have mentioned on Twitter in recent days too: if the Katusha team is rejected from the UCI’s World Tour on ethical grounds why did the Licence Commission say the team is free to apply for a lesser Pro Continental licence?

Surely a team could be in the second division because it has weaker finances or less ranking points, but not because it has looser morals and easier ethics?

As a follow-up to Vroomen’s observation here are the rules for the World Tour and Pro Continenal candidates alike. A signed copy of Eugène Christophe’s 1919 maillot jaune if you can spot the difference… 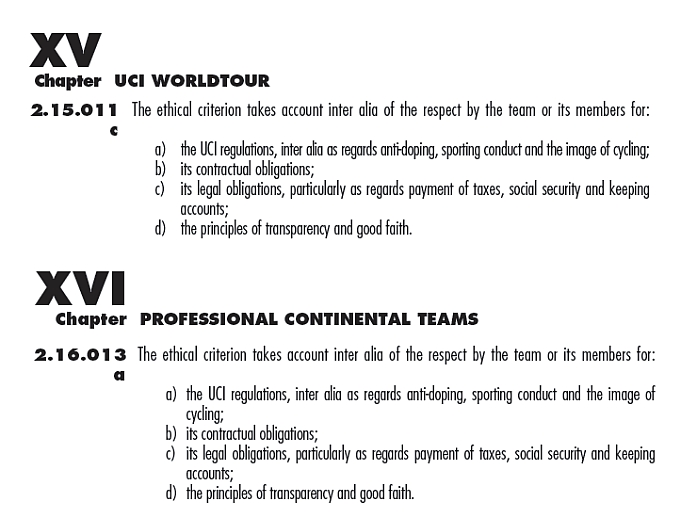 The wording is identical and nobody gets a prize for pointing out the spacing between words is different. Note the definition of ethics includes contractual and financial issues such as accounting for the money spent.

In a rulebook identical words have have an identical meaning. If so then Katusha’s rejection from the World Tour means it’s out of the second division too and 2013 will bring no more than club races in Russia. Unless it can persuade the Court of Arbitration for Sport to rule it back into the World Tour, a strong possibility.

The team is appealing to the CAS and started a timetable but this goes on hold over the holiday period. The clock starts ticking in 2013 but it seems unlikely that an expedited hearing will take place to fix things before the Tour Down Under now just 30 days away.