Thanks to Seven Cycles 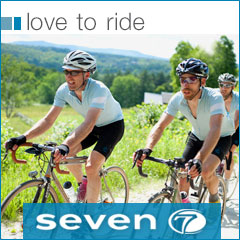 Seven Cycles are advertising for February and it’s a custom to say thanks in public for their support. The US framebuilder is here for a month with their ad on the top right of the page. They offer a range of custom built carbon, titanium and steel frames and to find out more, click on the ad to visit their site and learn more. You’ll land on a custom page, a nice touch.

If you enjoy this site then it’s thanks to people like Seven Cycles that it happens. The sport has its ups and downs but angry governing bodies, perjury-prone pros and other negative stories just can’t seem to stop things. Cycling has to be the most resilient sport going.

One suggestion for this is that it’s something you can enjoy too. Now a ride to work is rarely an adventure but still going to be more rewarding than driving or taking a bus or train. But a proper ride for the sake of it remains a pleasure and an adventure. Few get to play in the Superbowl or the Nou Camp but you can visit the roads used by the big races. And these places aren’t nearby you can still experience the same feelings of exhaustion. In short you can get all the positives out of the sport without bothering about the negatives.

Each week the series of “Roads to Ride” on here looks at some of the great roads to enjoy. It’s proving a very popular read and perhaps because it allows some weekend escapism. This weekend will feature the Col de la République. It’s not legendary but the more I look into it, it deserves to be.

It was the first high pass to be used in the Tour de France. Its inclusion in 1903 was repeated in 1904 but a vicious mob attacked riders. But the climb is also a celebration of the derailleur. Gearing on a bike wasn’t invented here but it was perfected by a man called Paul de Vivie who spent his best years riding up and down the mountain with others to test their equipment. In fact he invented the word “cyclotourisme” and is arguably one of the most influential figures in the history of cycling.

If you love riding, you should like the story this Saturday. And if you like this blog, please check out the Seven Cycles website and their offerings.