Bike Fit and The Arms Race 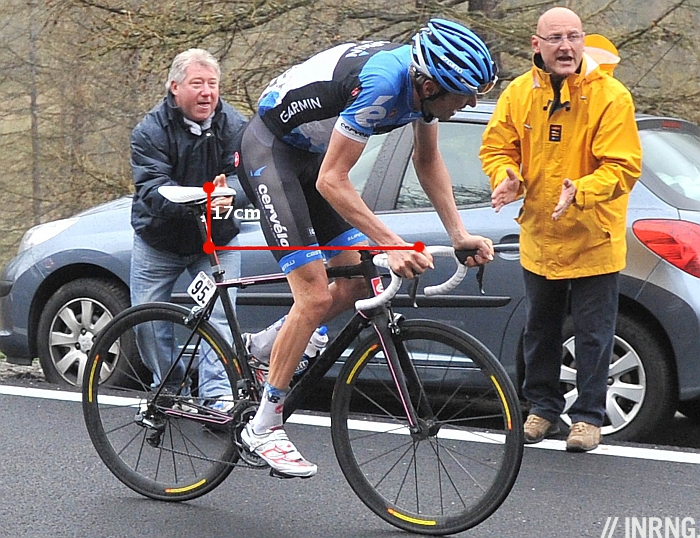 Last week’s piece on narrow handlebars was a popular read as it highlighted the lengths – 38 centimetres in case you asked – some riders go to in the search for aerodynamic advantage.

I was going to make an observation about rider position over the years in that post too but deleted this as the narrow bars were the real story. But I promised to return to the subject and have been prompted by an article about Philippe Gilbert’s BMC bike on cyclingnews.com where bike reviewer James Huang mocks the low position and anyone who’d try to imitate the world champion:

Sure, the extreme position looks way cool and the ‘SLAMYOURSTEM’ kids would worship the ground you roll on. But let’s be realistic here – you’re not Philippe Gilbert and twice-daily Ashtanga yoga sessions and a closet full of Lululemon probably isn’t going to get you there, either. But if you’re 1.83m tall with a rockin’ Euro fauxhawk and still think you can pull this off, go on and try – we dare you. Let us know how things went after your resultant chiropractor appointment.

Huang is right that Gilbert has a low position (but note he’s 1.79m tall). Regardless of Gilbert, rider position on bikes has changed substantially over the years but the resulting improvement in aerodynamics is questionable.

So what’s the change? Well seat height has changed little over the years, set as a percentage of leg length with small variations to suit individual habits and bio-mechanical fashions. Instead the change in rider position has come in the frame size and the difference in height between the seat and the bars.

Take the three photos and look at the riders and their elbow angle. Francesco Moser in the middle has a small bar to seat drop, you can almost draw a line across from his stem to the rails of his saddle. He’s famous for his low position and style on the bike but actually has very high bars compared to today’s riders. Moser’s flanked by Bradley Wiggins and Sylvain Chavanel. Wiggins isn’t in full flow but you can see the example of straight arms. Meanwhile Chavanel is going full speed with his elbows bent but is on the tops of the bars because they sit lower. Were he to put his hands into the drops then his elbows would be at, say, 45° rather than Moser’s right angle. The gap tends to grow with taller riders.

Hesjedal is an exaggerated example with a 17cm drop according to Bikeradar:

Hesjedal stands at 1.88m (6′ 2″) tall and yet he rides a comparatively tiny 56cm frame. Much of that is based on his extreme position, which includes a gargantuan handlebar drop of over 17cm. Even with the shorter head tube afforded by the downsized frame, Hesjedal still runs a 140mm-long stem with a -17° angle, and even removes the upper headset cover to gain another couple of millimeters.

Note the drop is to the top of the bars, the part you hold when you want to sit up. Only Hesjedal has a greater drop than when the likes of Moser used a low profile bike to break the hour record.

So what’s behind the changes over the years? It’s hard to identify when it started but it seems the trend picked up in the late 1990s when the compact or sloping frame arrived, notably thanks to Giant, Mike Burrows and the ONCE team. Teams used to custom frames or at least half-centimetre increments suddenly had to chose between a more consumer friendly XS, S, M, L, XL label and make up the difference with the seatpost and stem. It worked as a smaller frame was both more rigid and yet lighter. The smaller the frame, the more it could be marketed as lighter than its rivals, a valuable competitive advantage. For example an 800 grame frame today would probably weigh 1,000 grams if built to yesterday’s geometry. These smaller frames came shorter head tubes and perhaps road tradition meant nobody wanted an upward sloping stem? Either way over the years leg position is the same but the position of the bars has changed.

We now see riders like Chavanel with the hands on the top section of the bars whilst . From time to time some even sprint with their hands on the brakehoods, for example see Peter Sagan in the Amstel last year and Fabian Cancellara has done it several times too. It’s not all one way, for example I cited Wiggins above in his Cofidis days but he climbed the Joux Plane in the Dauphiné with his hands on the drops: 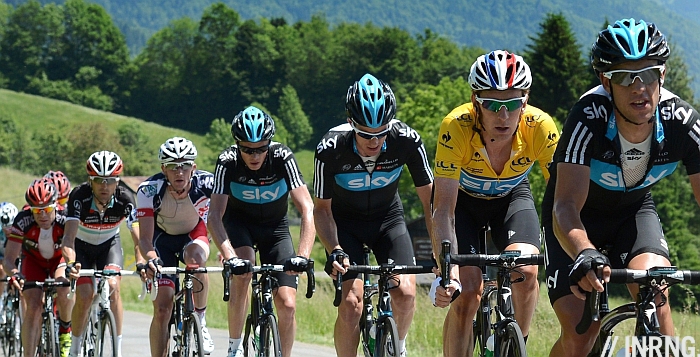 Evolution?
I also wonder if there’s an element of natural selection at work. If you can hold a position on the bike as low as Hesjedal then you have an aerodynamic advantage, even when climbing or perhaps especially when climbing because you are low even with the hands resting on the top of the bars. Whether this position is natural or thanks to yoga, it can help give a big advantage on the others therefore, everything else being equal, we’ll see more riders using a low position in the pro ranks than elsewhere. But it can also be inefficient if it is uncomfortable or unsuitable.

Another form of evolution is aesthetics or put simply, looking “pro” on the bike. There’s even a website dedicated to the praise of low positions: slamthatstem.com. A smaller frame looks lighter and the position appears more aggressive. But there’s nothing professional about back pain and even the big name pros look like amateurs when they sprint with their hands on the brakehoods.

Slipstream
This post follows the ideas expressed by others, you might have spotted the trend too. Gerard Vroomen’s done a whole series on posts on it here, here, here and here and more recently FDJ’s team coach Fréderic Grappe mentioned how few riders can bend their elbows.

Summary
The bikes have not changed much over the years, advances in tubing or gearing are arguably incremental improvements that track technological improvements. Even narrowing the width of the bars in still a relatively small shift. But over the last 20 years there has been a switch to much smaller frames and lower bars although the bio-mechanical response just seems to a change in the elbow angle.

It might be more efficient to raise the position but I’m not sure if the sport will go back. Vroomen tells how Cervélo raised the head tubes on some models but surely other manufacturers will be worried about adding weight and looking old-fashioned? Imitating the pros is one thing but find out what works for you rather than copy the measurements of a stranger.