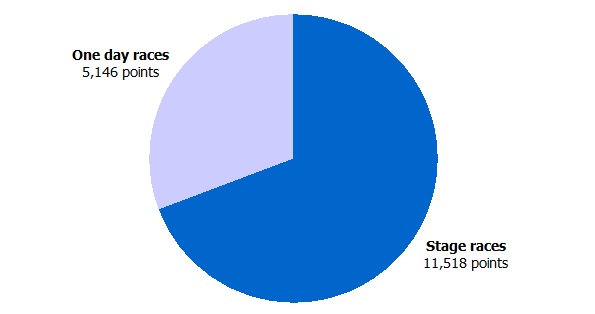 The chart above shows the split of points between stage races and one day races for the UCI World Tour in 2013. Out of a total of 16,664 points available during the season, 69% are to be won in stage races. This is disproportionate on a calendar of 154 days of racing where stage races account for 140 days or 91% of the calendar.

Is this a bias for stage races? Who gains and who loses? And what do smaller teams do when they decide how to spend their budget on riders or deploy tactics on the day?

To start, a quick reminder that the points in discussion here relate to the UCI World Tour and not the full pro calendar. Also the total of 16,664 points is not set yet because the configuration of some stage races is not known and there are no points for a team time trial stage. So don’t count down to the last point but the relative percentages mentioned below remain the same.

Stage races are not just for stage race specialists. Instead many stages suit sprinters and others who thrive in one day race situations. If we split the calendar into between one day races and stage races but break the stage race into points for the overall and the stage wins, here’s what we get: 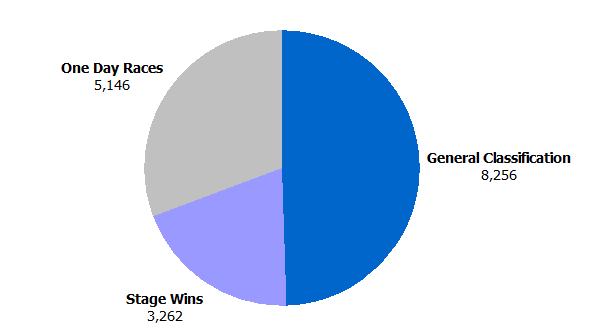 What can we tell from this? Well 50% of the points available in 2013 are for the overall classification. Remember this is not just for the winner but for the top-20 in a grand tour and the top-10 in other stage races where the winner collects the most points but others can accumulate points.

One obvious point is that every rider needs to work on their time trial skills. Should a rider get in a lucky break one day and gain time to leap up the overall rankings then they need to be ready for the time trial stage in order to defend their position. A few places lost on the day can mean lost points that count by the end of the season. Similarly teams should be checking out every time trial stage matters, even scoping the route for the lesser events can pay dividends and it’s an investment that costs less than hiring riders.

The next point is one long-time readers will remember: riders who can make the top-20 are very valuable. TV viewers might see the battle between the top-5 in a stage take place on screen but a few hundred metres lower down the mountain other riders are fighting hard for their position. Riders like Nicolas Roche, Janez Brajkovič or Maxime Montfort have a valuable haul of points. The point here is that these riders have no incentive to risk a stage win with a long range breakaway when they can earn a good living thanks to consistent riding, pacing themselves during a mountain stage and avoiding long range breakaways on transition days to keep fresh for the big time trials. This riding is not exciting but it is respectable and it’s their pay packet that’s got the panache. I’ve made this point before but it can be expressed in numbers:

With arithmetic like this we can see why riders prefer to play a long range game in a stage race.

Rider Type
Looking at the mix of points, what about the type of rider? Here things are more even, albeit with a bias to the stage race specialists. Over the year 50% of the World Tour points are awarded to the GC of stage races with the remaining half of points going to one day races (30%) and stage wins (20%). A one day classics specialist like Tom Boonen, Philippe Gilbert or Fabian Cancellara can aim to grab a share of the one day points plus those available for stage winners. But a stage race specialist like Bradley Wiggins or Joaquim Rodriguez can aim for more with a high overall position plus placing well in stages along the way and that’s why they top the ranking tables.

But there’s a second element here in that placing several riders in the top-20 of the overall can matter more. Big teams can win big but those lower down have to fight for their chances, whether it’s winning, TV airtime or points. Take Radioshack in the Tour de France. They won the team prize and got to stand on the Champs Elysées podium but they also got 166 points by placing four riders in the top-20 (Zubeldia, Kloeden, Horner and Monfort), something that helped the team considerably given the disappointment suffered by the Schleck brothers and Fabian Cancellara. Now we didn’t see this riding on TV so much but it brought Radioshack more points than a second place on the podium.

Moneywheel
Cycling is often about emotion and passion. When I picked a highlight of 2012 the first choice was Thibaut Pinot’s Tour stage win as Marc Madiot roared encouragement from the team car. But cycling is business too and I’ve been exploring how teams can get value for money: Moneyball into Moneywheel.

With the points system above there are several lessons:

All this might horrify some readers who to see a show, and team managers like Marc Madiot with his Dantonesque love of audacity. For example the logic here suggests the dismal tactic of a “mountain train” dedicated to pacing a rider into 14th place rather than trying for glory.

But it doesn’t have to mean the pre-race team briefing is replaced by a spreadsheet. Instead you can race as boldly as you want but if the plans don’t work, back them up with the means to secure some points, especially if you’re on a modest budget. This way you can go for glory but also hope to retain your spot. Now that’s all easier said than done, half the peloton is trying to win points. But if we know the points, we know the hidden incentives.

Summary
Half the season’s points go to rewarding the overall classification of stage races meaning consistent riders can quietly pick up points all season long even if they don’t show up too often in front of the cameras. There are riders who are only a few watts short of being in the front group in the mountains but many fans would not know them if they walked past them on the street yet these riders can be better paid than others we might see in breakaways or even on the podium a few times a year.

Teams count every point and can pay large amounts to hire riders with enough ranking points to keep them in the top tier. But some seem to be missing a few homegrown tricks like scouting time trial stages or giving up half the team on the day to work for the team sprinter only to miss the top-5 altogether.

None of this is why we tune in to watch a race on TV, tolerate a jumpy pirate video stream or trek up the side of the mountain to watch a race. But it can explain what is going on in front of us whilst we watch. Having looked at this topic twice in a week it seems to scratch the surface.

This is Part II of a look at the World Tour points system. You can read Part I at inrng.com/2012/12/world-tour-points-analysis-2013/