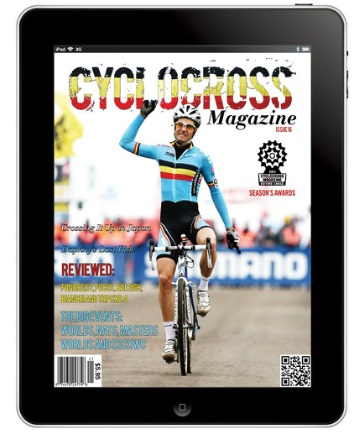 This blog covers road cycling but given a trial subscription of Cyclocross Magazine for review I thought it was worth a look. The sport is growing fast in the US and this magazine covers plenty of the scene there as well as covering the international races in Belgium and beyond.

It’s been a good read with a breadth of articles that I didn’t expect. There’s race reports and tech coverage plus some tips on coaching and health, for example how to reduce back ache. Good stuff but you’d hope it’s there. Better was the coverage of cross in Japan, an unexpected feature of the latest magazine and even a feature on the “psychogeography” of a CX course, how a park or open space is fleetingly turned into a battle scene, an obstacle course, a stadium.

Tech reviews
The product reviews are good, they have tested a product like a cyclocross bike with the usual listings of the spec and price but there are also long term reviews where they revisit a bike months later to give more views on it after they’ve had longer to test it although obviously I can’t test the bikes to double-check their findings.

Not all bike reviews are long term, in fact often the trade holds a day or two for journalists to test the machine. But the first impression of a bike counts, for example you quickly notice flex in a frame but can get used to it over time. But returning to the bike the things you discover over time is a sensible idea, especially for a cross bike where endurance counts for plenty.

Photos and design
Like Balint Hamvas’s Cyclocross 2011/2012 album, the photography stands out to someone used to road cycling because you typically see more detail. You see the rider in the foreground first and can note all the usual things, the effort on their faces and the strain on the legs, the kit and the bike. But you notice the backdrop too, the fields and the crowds and instead of a sweeping panorama of the Pyrenees, the rider or the crowd is the star here. It’s lively and the photography captures this. Overall the magazine is well-designed, it’s heavy with ads but there’s plenty to read too.

What’s not to like?
Well this blog has many readers around the world and Cyclocross Magazine has a lot of US content so if you’re not in the US then it might not be for you. Then again it can be read online via digital subscription and all the tech focus will appeal to cross fans around the world, plus the features on the sport, whether Japan, Belgium or the geography and philosophy piece will give cross fans plenty to read. After all I’ll read road magazines like Cycle Sport, Ride or Cycling Pro and yes they have a British, Australian or Italian take (and one is obviously in Italian!) but this is only gives wider views.

Where to buy it

Conclusion
A good read for all cross fans whether you want history, race reports, tech or more. In fact I enjoyed reading this more than watching a race via pirate stream, there’s more depth and variety than watching Nys and Alberts in a duel and the web subscription worked better than justin.tv.

If you’re a cross racer in the US you probably read this already, if you follow the sport in Europe then it’s worth a look. As ever with these reviews, this is just a view more than a review so take a look at the mag if you want to see for yourself.