There are still unexploded bombs from World War Two. Every now and then one is discovered buried deep in the ground, often during construction work. Residents are evacuated, a security cordon is put in place, a military bomb squad arrives to defuse the defunct device and within a day or two construction work resumes.

Cycling has its buried bombs too. An axis of deceit carpet-bombed European roads, bridges and mountain passes with syringes and vials some of which are only blowing up today. Yesterday’s explosive stories about Lance Armstrong and others involved in the squad that went from US Postal to Radioshack was just one example. Only headlines and text got sometimes warped by the shock. Here’s a quick look at a few of the issues.

The news bomb about the pending charges for Lance Armstrong and others involved in the squad that went from US Postal to Radioshack resonated beyond the cycling media. France’s most watched news show covered the topic, Britain’s BBC ran the story in their news bulletins and in the US the story was broken by the Washington Post, pumped up by the Wall Street Journal and the main TV channels relayed the news. It went further than L’Equipe and cyclingnews.com.

As I put on here yesterday it’s not about Lance Armstrong. His celebrity means the mainstream media runs his name but he’s just one of six facing charges.

No charges?
One of the most important things to note is that nobody has been charged. This fooled me yesterday too. Rather USADA has written to those involved to state it is “opening a formal action”. The six have time to make a written response and then the matter will be given to USADA’s Anti-Doping Review Board which will consider the proposals from USADA and any responses received in return and then decide whether to charge the six. Now the charges seem likely but on a procedural point USADA has only started the process and has yet to decide whether to put the case to an abitration panel. This might be a formality but it means for now the case is not in full swing. Those involved have been notified not charged.

Armstrong is out of the upcoming Nice Ironman triathlon because this is run by a profit-making company, WTC, with its rules. If he was still cycling then he would not be suspended.

Statute of limitations
Can USADA go back to events beyond eight years? Yes, as a past precedent exists. Where false statements have been given in the past this can reset the clock, as agreed in USADA vs Hellebuyck where the Belgo-American marathon runner was eventually busted for EPO. Also USADA suggests several of the events relating to the cycling case have happened in more recent years.

Can Radioshack be excluded from the Tour de France?
Yes and no. French radio has reported that ASO are reviewing whether to let Radioshack compete given the scandal. A review is normal and I think the team are safe.

Tour organisers ASO follow the UCI rules for the race but participation in the race is also the subject of their own rules, largely because the UCI deals with sporting rules whilst ASO extends this to wider behaviour. For example if a rider punches another rider then they can be excluded by the UCI rules. If a rider were to, say, punch a hotel worker in the evening during the race then ASO can act. Here’s my translation of ASO’s rule:

ASO holds essential the preservation of its image, its reputation and of its race. ASO reserves the express right to refuse the participation – or to exclude – from the event, a team or one of its members of which the presence would be likely to harm the image of ASO and/or the race.

The rule goes on to specify how this happens, notably whether it is because of one or more members of the team. Also the team has 24 hours to appeal and can go to the Court of Arbitration for Sport for an expedited hearing to settle the matter. This happened in 2009 when ASO tried to block Tom Boonen from racing, his team went to the CAS and won.

As things stand right now Radioshack’s potential problems are Johan Bruyneel and Dr Pedro Celaya. To exclude the whole team would be a collective punishment for riders and other staff who are not part of the USADA case. In addition, as noted above even Bruyneel and Celaya have yet to be convicted, yet alone charged. It gets tricky here, can you exclude someone because they’re under investigation? My take is that the presence of Bruyneel would be bad for the team’s image, half the media’s questions would be about him so ASO might not want him there for their own image and let’s remember ASO and the UCI conspired to eject Alexandr Kolobnev from the race last summer, dumping the rulebook overboard for the sake of image. Plus the team and his sponsors would prefer the focus on the racing too so everyone has an interest in Bruyneel staying at home. But beyond the PR aspect of this, those involved still have the right to continue with their work.

So who won the Tour de France?
Lance Armstrong. But if the case goes to arbitration and Lance Armstrong is found to have committed an anti-doping violation then the rules state he must be disqualified of any results obtained. This is procedural, a consequence of the rulebook. There’s lots of chatter on social media about who might recover the “win”, cyclingtips has a good graphic from Bicycling Magazine in his item yesterday. We’ve seen the same happen already, only the other day Jan Ullrich was eventually convicted for doping and his results are stripped. 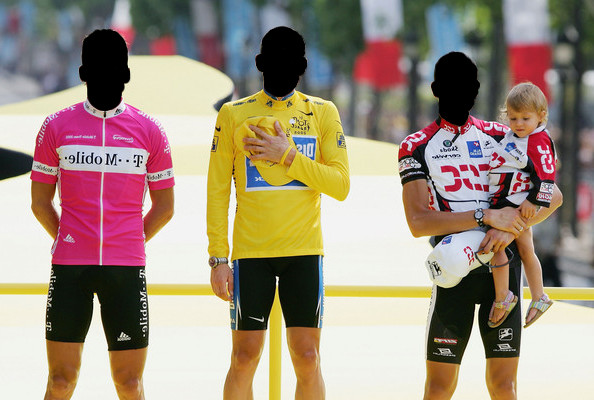 The future of cycling's past?

But there’s no winner. Most of the potential candidates who shared the podium were arch-dopers filled to the gills with blood the consistency of ketchup, it is absurd to award them the win. But that is what the rules say should happen and so we must support this, even if it feels like something out of a Kafka story. I want to see the rules upheld because flouting them created this mess but nobody will cheer for the new winner.

Why are they picking on Lance?
They’re not. Armstrong is named last on the list of six, one name amongst others. Besides USADA can’t chase after Italians or Germans, the US in USADA is for United States. Also note the idea of going after things from way back is not new. The Swiss and CAS eventually caught up with Jan Ullrich, a peer of Armstrong although they nailed him rather than the now-exposed organised doping system within the T-Mobile team.

How come some riders have testified, shouldn’t they be prosecuted?
We don’t know the identity of the 10 riders who have testified to USADA although I gather the list will probably spill on to the internet soon. British journalist Brendan Gallagher wrote a good piece asking why we’re listening to these witnesses instead of punishing them. It’s a valid question but invites three responses.

Summary
They say truth is the first casualty of war and when a news bombshell like this explodes headlines ditch the nuance. It’s understandable but I thought it worth revisiting some of the issues here to explore things in greater detail. For now nobody is charged, we only have allegations and Radioshack’s riders should focus on the Tour de France.

The greater lesson here is that the past keeps coming back to bite us. Old stories might get buried under pages of newsprint but this one just keeps going on and on. However USADA’s action looks like the last of the matter although I suspect the “did he, didn’t he” debate with Armstrong will continue to rumble on internet forums and beyond.

A hearing is likely in November. The Tour de France is in two week’s time and here’s hoping we can get back to discussing today’s races as well as the issues facing the sport.