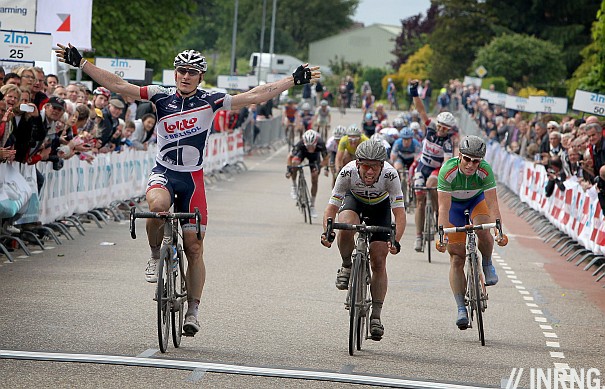 A heavy week with the recent news dominated by a triathlete. But the racing goes on and so here’s a mention of actual sport for balance. Earlier today Andre Greipel outsprinted Mark Cavendish and Mark Renshaw in Stage 2 of the Ster ZLM Tour in the Netherlands. Look closely and you can see team mate Greg Henderson celebrate. Cavendish might have finished second but he is now in the overall lead after finishing third yesterday.

As of today Greipel now tops the victory rankings with 13 wins, one more than Peter Sagan. It bodes well for the Tour de France. It’s easy to think of the overall classification, of Wiggins, Evans and the rest but the first week is reserved for the fast finishers with a mix of flat and uphill arrivals.

Whilst Mark Cavendish has dominated the Tour de France’s sprint finishes in recent years he might find things harder. Assuming he rides, he’s going to have less support from his team as Sky commit riders to supporting Bradley Wiggins in the high mountains. Meanwhile Greipel is looking very strong this year and we’ll also see Marcel Kittel and Peter Sagan as well as others in the sprint.

Sometimes the sprint finishes can be boring, hours of television reduced to 30 seconds once the sprint starts. But the wider competition should bring even the flattest stage alive. I’ll be interested to see which teams will work to set up the sprint. As already mentioned Sky won’t bring many wagons for the sprint train. But the same for Greipel and Lotto-Belisol who will come with Jelle Vanendert and Jurgen Van den Broeck and others; Argos Oil-Shimano will also have a mixed team whilst Liquigas-Cannondale come with Vincenzo Nibali, Ivan Basso and others who won’t go near the front of the bunch for the first week.