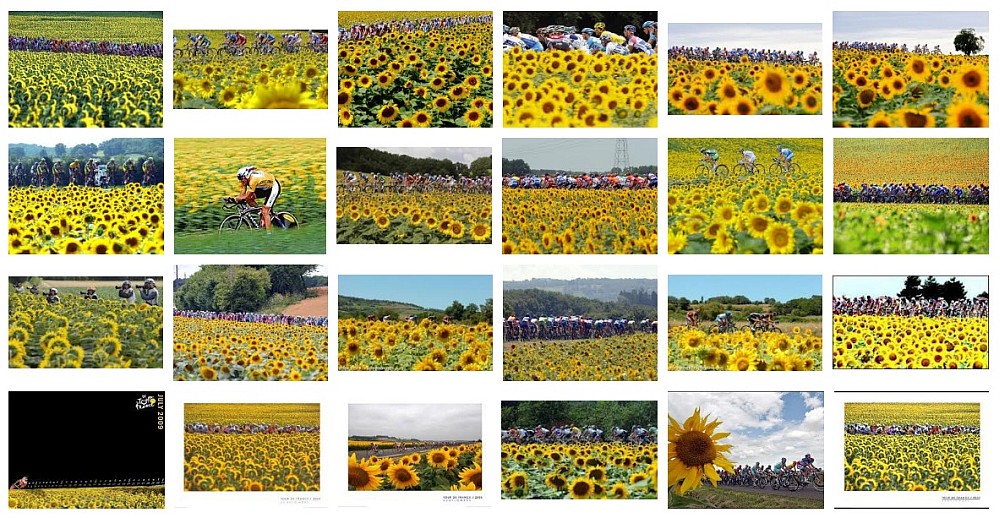 April and May were cloudy and wet across much of France and one consequence is that a lot of crops are slow to grow. A big problem for farmers and the nation’s giant agribusiness… but also minor headache for photographers in the Tour de France.

On day when nothing much happens in the race if the sun is shining a photographer is sure to sell a photo of the bunch rolling past a field of sunflowers. It’s the sort of image that will make the front page of a newspaper even if most of the readership aren’t following the race. Only the crop in many parts of France is still some way from flowering.

Swiss Timing
Talking of late bloomers, it was a surprise to see the Astana’s Frederik Kessiakoff beat Fabian Cancellara in the time trial stage of the Tour of Switzerland. But all the results were a mix, you look down the list and see Maxime Montfort in third place, Jérémy Roy in fourth and Robert Gesink in fifth. Gesink lost contact on the climb to Verbier so it’ll be interesting to see how he climbs in today’s stage with the finish in Arosa.

I was pleased to see Roy take fourth place. An interesting rider on and off the bike, he hasn’t been sure about selection for the Tour de France with FDJ-BigMat. You might remember him from last July getting in many breakaways including the stage in the Pyrenees won by Thor Hushovd. He won the most aggressive rider award for the race. But he also appeared to be one of the most thoughtful. He’s got an engineering degree and also wrote a daily diary for L’Equipe last summer which was informative and very well written. Selfishly I hope he rides the Tour just so I can read the diary.

Euskaltel
Reports have said the Basque cycling team Euskadi-Euskaltel is going to be saved thanks to telecoms sponsor Euskaltel taking over the sponsorship of the team. But this morning L’Equipe reports that Festina could be making a return to the sport. The watch brand left the sport in disgrace after its team was exposed as running a vast organised doping programme for almost every rider on the squad but now it might return. We’ll see.

Festina is Latin for hurry and the team could need the money fast than some thing. To cut a long story short Euskaltel did a deal with France’s main telecoms company, France Télécom but things went sour. France Télécom sued Euskaltel and won damages and a Basque court has ordered Euskaltel to pay €222 million in compensation to the French firm. This is a vast sum for the Basque telecoms company and if I can’t find the company’s balance sheet online it seems so big that you wonder if the firm can survive or at the least fund a cycling team Either way it is the subject of legal wrangling and Euskaltel is appealing the court’s decision.

Nike Dimples
US wheel manufacturer Zipp started using dimples on its rims. The small dimples are like a golf ball and the simplified theory is that it stops the air “sticking” to the object. Now Nike has come up with dimpled clothing for athletes in the Olympic games. If nothing this is great PR because many are publicising how Nike innovates and more. The Science of Sport blog has a good take on this and other clothing improvements like swimsuits (scroll down after the Armstrong bit). 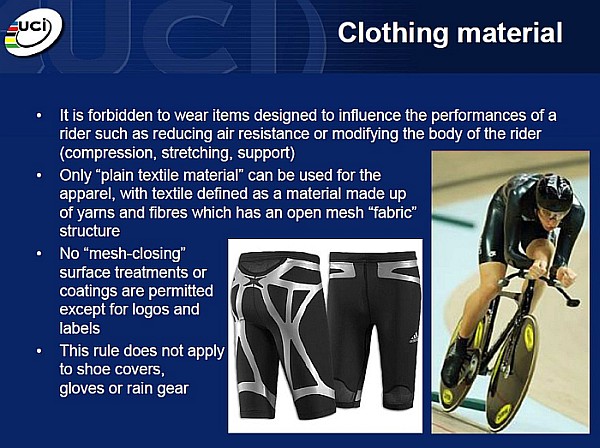 But this isn’t legal in cycling. New moves by the UCI to regulate clothing forbids clothing like this. The slide above makes it clear. The full presentation was covered before on here.

Olympic Selections
Various nations are announcing their selections for the Olympic road race and time trial events. It’s an odd event. Not because it happens every four years and not even because it sees national teams in action. Instead it’s the squad size is so small and the rule that says anyone riding the time trial must also do the road race. A good TT rider will be invaluable for the road race because they can work as a team mate for the sprinter. But it means selectors are having to pick riders now with their eyes on the TT and the road race too. Plus there’s still a long time to go before the race.

Vélo Art
A quick mention of an art project which can be seen for real in Britain but also online. Andrew Conroy has photographed TV coverage of the Tour de France to recreate images from the race.

I’m always interested to see how artists view the Tour de France, from photographers standing in a field of sunflowers to Kraftwerk turning the sounds and rhythms of a race into music. There’s not much literature on cycling, we have plenty of sports books but few writers have written about cycling for fiction.

Next post: The Moment The Race Was Won: Tour de Suisse