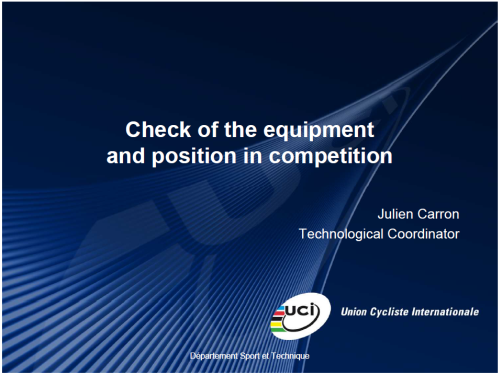 The sport’s governing body, the UCI, is moving towards greater regulation of equipment, both the bike and clothing. Whilst rules about the bio passport or race radios might seem abstract, there’s a high chance these ones will affect you.

Whether you’re racing locally, buying new parts or worse – if you define yourself as a road cyclist – that moment when a triathlete overtakes you out on the road, here are some rule changes that could change your riding.

The UCI’s new regulations are set out in a new presentation given this month, a copy of which I’ve uploaded to inrng.com (PDF). Much of the 53 page document is normal and a reminder of existing rules but there are some new changes and things to take note of. To save you reading everything, here’s a look at some of the slides. 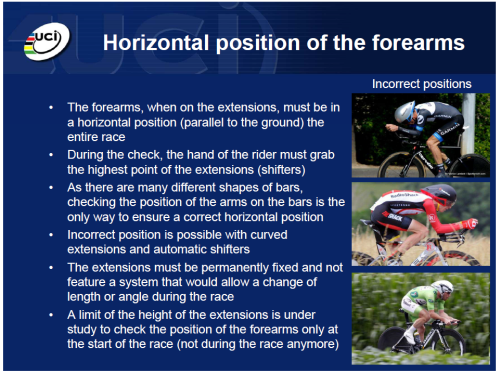 As the slide above makes clear, not only must the bike have appropriate handlebars but the rider must hold them in a particular way. They are trying to standardise the position of all riders here and this will have a variable effect since some riders can achieve a tuck with their back and others cannot; some can keep their elbows closer together than others. It also seems a hard one to police, are you able to move your hands at all during the ride? 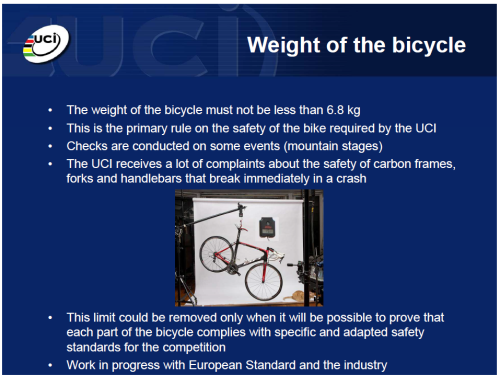 Here the UCI is explaining that the rule on minimum weight is staying and all bikes must weigh 6.8kg or more. Note that this can change should European safety testing prove that lighter bikes are ok. I still find this arbitrary and one unintendend consequence of the rule is that riders are now fitting expensive power meters and deep section wheels to add weight to their bikes. 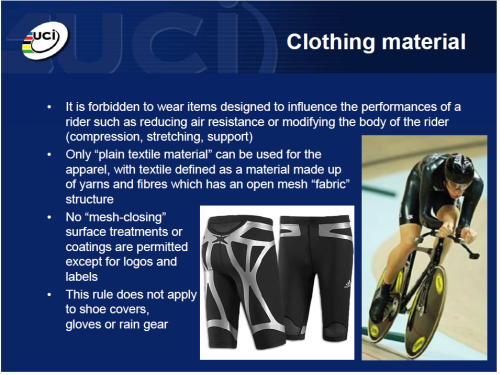 Out goes compression clothing and anything with a coating on the surface. In the 2010 Olympics several teams including the British track squad were using clothes with a coating to smooth the air over the fabric. No more.

“Socks (and shoe covers) used in competition must not exceed the mid-distance between the ankle and the knee” says a new rule should have purists rejoicing although the spectre of black socks is still permitted. Joking aside, on a technical basis I’m not sure why socks are subject to regulation 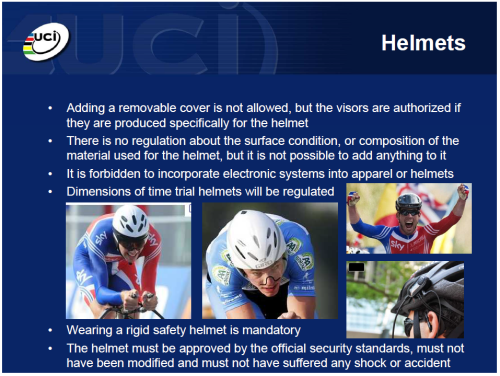 The use of helmet covers and modifications, as used by Mark Cavendish during last year’s World Championships and more recently by the likes of André Greipel is out. It looks like Team Sky can use their existing non-vented helmets but no helmets where you can unclip a cover will be allowed. 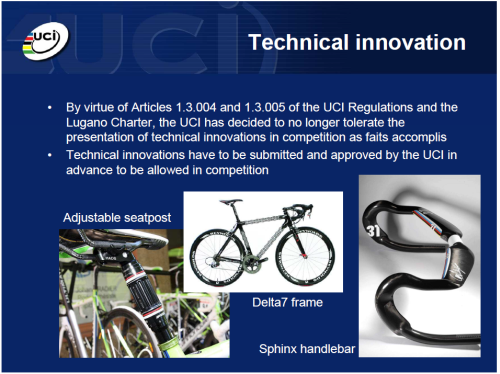 This slide is interesting as it stipulates all “technical innovations” need UCI approval. By the examples shown any new winged handlebars or special seatposts now need approval. I find this an interesting move as hopefully the UCI can review something but it now places the governing body as a technological gatekeeper for the cycling industry. If you invent a new clipless pedal or a better way of attaching the saddle to a seatpost, you now need to get the UCI to say yes. 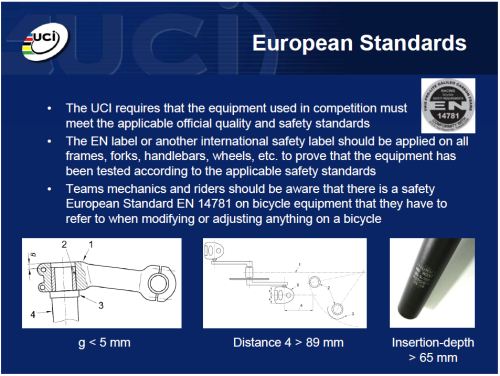 Slide 43 is another one of interest. Forks, bars, wheels and more must be tested to an approved international standard and labelled as such. If your bike is not compliant, no race. In addition the UCI reminds team mechanics of these standards when they work on bikes, so not only must parts be compliant but they must be fitted properly.

This rule also includes complying with the tabs on forks. I’ve covered how French teams can’t file the tabs on their forks before and the UCI is effectively extending this rule. It’s an interesting call where a design feature essentially there for customers who buy a bike in Wal-Mart and forget to do up the quick-release is now in place for elite competition. It’ll mean slower wheel changes but I suspect innovation will mean people find new ways around this, like larger cams on the Q/R so they lever allows the clamp to surpass the tabs upon opening. 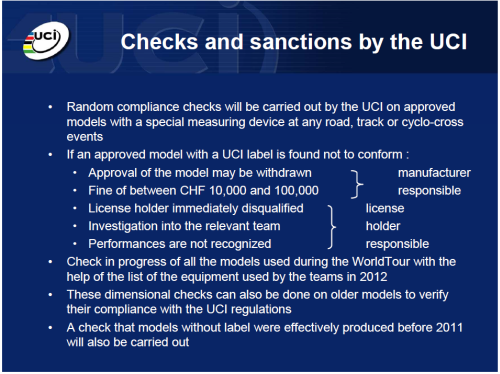 Finally Slide 52 reminds us that these rules apply to all and someone on a non-compliant bike can be prevented from starting, disqualified from racing or see their result nullified after the event if their machine is not in line with the rules.

It means you too
This isn’t abstract stuff concerning bikes used in the Tour de France or clothing used by Olympic athletes. Whilst the slides above talk about World Tour, the UCI rulebook says “all licence holders”.

If you’re outsprinted next Sunday by someone, check if their bike is approved. If not, you could have grounds for appeal (is that a groan I hear?). ow I hope that these rules are ignored but it’s never good when you have rules that are selectively applied or designed with the hope people ignore them. If commissaires forget to enforce the rules for beginners, it’ll be interesting to see where the line is drawn. Regional championships, amateur national series, I suppose it will depend on how zealous the officials are?

Worryingly the rules are saying a newcomer must have a compliant bike. I can see the logic in ensuring our newcomer has a safe bike, nothing will put them off more than seeing their machine crumble under their legs mid-race, even if crashes are usually caused by the rider. In theory our newcomer can’t show up on a bike they bought a few months ago at a local fitness store.

Call the lawyers?
There’s also the question of liability. Whilst the UCI is no stranger to the courtroom, the reference to international safety standards is useful but I have a concern that in acting as a guarantor of bike safety that someone crashes and decides to sue the UCI. Essentially they say “you told me it was safe” to the UCI. Imagine, for example, the UCI approves a frame by a well-known manufacturer, insert a name as you choose, and then the frame is subject to a product recall because of a manufacturing or design flaw. If the UCI has approved the frame will some see this as proof the item is safe? Hopefully the UCI has this under control.

Summary
Here’s a chance for you to see the new rules. I can see how the UCI wants to ensure fair competition and a level playing field but have some concerns. The UCI is there to set the rules after all.

But there’s a stronger stance here as the UCI is not just setting rules but assuming a degree of responsibility for safety. It is also imposing itself as a gatekeeper for cycle technology whereby new products and innovations must be approved before use in competition, often the shop window for the sport.

I can see the logic in all this but let us not forget the cycle trade has backed teams since the dawn of the sport as a means to publicise products. If a century ago Cycles Alcyon found the Tour de France was not the place to show off its best products, there would have been no Alcyon team. The risk now is that the likes of Cannondale and Specialized might prefer triathlon as a shop window… or they get behind a less restrictive breakaway league.