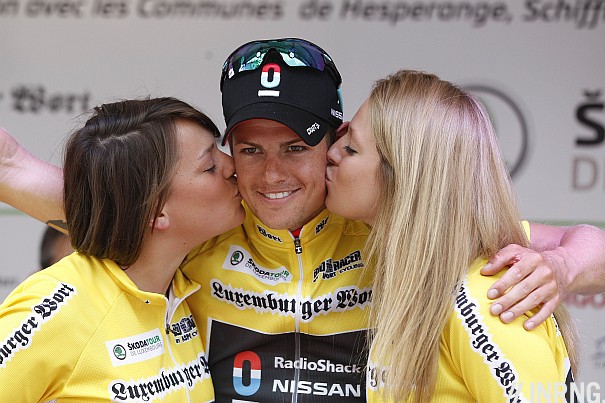 It looks like the perfect picture for a cycling team. A smiling rider stands tall on the podium, dressed in yellow with the team logos in evidence as the girls hold their pose for the cameras. Even his sunglasses are perched just right on the team-issue baseball cap. But there’s something wrong with the picture.

I’m not talking about the composition of the image. You might notice the podium girls haven’t zipped up their jerseys fully but it’s not that. No, the problem here is that Radioshack-Nissan’s Jakob Fuglsang has won a race and bizarrely this could prove damaging for the interests of his team.

The Danish rider is linked with a move to Saxo Bank-Tinkoff Bank. Today Denmark’s Ekstra Bladet reports that Radioshack-Nissan have told Fuglsang that he won’t race any World Tour races for the remainder of the year (in English, via cyclingnews.com). This is because he is leaving the squad and any ranking points earned will accrue to his new team, likely to be the Danish Saxo-Tinkoff team, when the UCI evaluates a team’s chances of a 2013 licence later this year.

Fuglsang is not alone. Riders who sign for a new team or even indicate that they intend to leave are being punished by their current squads who stop from racing for the rest of the season. The explanation is simple: if the rider scores UCI ranking points then will be count towards the total of their new squad for the following year. Something is wrong here.

Analogy Time
Step away from the sport and imagine two factories making bike parts. Factory A has a machine that makes headsets and the owner of Factory B makes an offer to buy the headset machine which is accepted. Normally the equipment would be dismantled and moved out of one factory and installed into the other. Production restarts and in time Factory B hopefully makes money.

In pro cycling riders are assets too. Only when they sign from Team A to Team B they carry on racing with their existing team until the end of the season. If they win a big race the publicity and glory goes to the existing team but the UCI ranking points are counted at the end of the year for the new team. It is as if a share of our headset machine’s output is going to Factory B whilst Factory A is still having to run, supply and maintain the machine for several months. This creates conflicting and perverse incentives for a team owner. They want the results and publicity but they don’t want another rival team to profit.

Why would any team invest in a guy that is one foot out the door?

Those are the worlds of Garmin-Sharp team owner Jonathan Vaughters. Hearing stories that Vincenzo Nibali is going to Astana, Vaughters tweeted “If I were Liquigas, Nibali would not be going to the Tour. Sorry” but added that he’s taken riders who were leaving to the Tour de France and mentioned Hushovd on Twitter who had a stellar Tour de France, winning prime time coverage for Garmin but ranking points for BMC although Hushovd later wanted to ride the Vuelta and could not. Vaughters is unique because he uses Twitter to explain these things out loud to fans but other squads do the same.

I can see the different sides of the argument:

It’s a classic scenario where points and money create incentives and unintended consequences. The UCI awards the top-18 teams “ProTeam” status on the basis of four criteria, one of which is “sporting merit” which means the squad’s haul of ranking points. Confusingly the UCI does not add up the publicly available total of ranking points but uses an internal spreadsheet to evaluate teams but what is obvious is that team leaders and their results and points matter. The UCI didn’t create this scheme to see riders “parked” for half a season but the rules as they stand can incentivise this practice.

Fuglsang’s case stands out. We should note that if Radioshack-Nissan does block him from World Tour races then if he’s not riding the Tour de France in July he can’t even do the Tour de Pologne. Within the team we should note Linus Gerdemann appears to have been parked but perhaps he’ll ride in Poland? Similarly Joost Posthuma has said in public he wants to leave.

Is this legal?
Riders might not be picked for races but (hopefully) they are paid in full and therefore no obvious employment laws are broken. Teams have no duty to give riders a fixed amount of racing per year and squad selection for a race is a subjective process. One avenue for a frustrated rider is the European right for equal treatment of employees because this is an iniquitous treatment, he is being discriminated against when he has done nothing wrong. But a rider might need a good lawyer and plenty of time.

Indeed it could be flipped around. In employment it can be the case that when an employee leaves one firm to join another they can be placed on “garden leave” whereby they are paid in full but told not to show up for work until their contract expires. This protects the current employer from the employee stealing secrets or being a destabilising influence in the workplace. If anything should a team want to block a rider it might consider doing this on a formal basis.

UCI reform
The obvious solution is to fix the points system. If a team spends money coaching a rider and supporting them during a race then it is logical it gets the benefits. Win a race and if the publicity follows for the team, maybe the points should count too. In fact this encourages investment in coaching and rider support which has to be good. On a simple basis the ranking points could be split 50-50 between the old team and the new team. This will still create distortions but helps to narrow them.

Another avenue would be for stronger rider rights. If a team openly states it won’t let a rider compete then the UCI needs to investigate. But the UCI rules (and the AIGCP-CPA joint agreement) specify rest and health but don’t reference a right to race. The riders have a form of union in the CPA and this looks like an obvious campaign issue.

Finally there is a section of the UCI rulebook that needs to be enforced and it relates to riders and teams signing deals outside of the transfer period. I’ve written before about this subject and to summarise the UCI rules say a rider and teams can only sign deals during a transfer period that runs from 1 August to 20 October. But this is a joke, the recruitment of key riders for a team is so critical for a team’s future that nobody waits for the transfer period. Instead talks happen all the time and deals are inked; if not formal employment contracts then signing bonuses and optional agreements are deployed.

Summary
Perhaps Fuglsang has been a bit too public is his desire to leave for another team but individuals aside this is a systemic concern for pro cycling. The UCI’s ranking system is essential but the law of unintended consequences means the same rules create perverse incentives that harm the interests of the sport. Some team managers are minded to block riders from racing, especially if the rider has a good chance of winning. This is madness.

Everyone is a loser here. Racers don’t race. Sponsors get less coverage. Teams get divisive. Fans don’t understand. The UCI looks clumsy. You’d think this is an incentive to fix things but there’s nothing on the table for now. The UCI has tweaked its internal rankings calculations to place more weight on a squad’s top riders in order to reduce the incentive on team helpers to chase points rather than support their leader… but this only means a team leader’s value is ever more dependent on their points haul. Thus a rider like Fuglsang is hit harder.

Reform is needed but it needs to be done with care because if things are rushed the risk is the same happens again. Rules aside, it just doesn’t seem sporting to block a rider. Plus you’d think Radioshack-Nissan need some good publicity and results after a disappointing season. Rather than worrying about next year’s rankings, it’s this year’s results that are missing.

Previous post: Who Will Finish Third in the Tour?