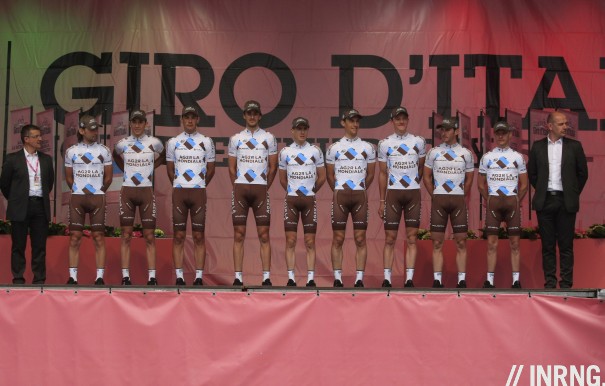 The UCI Pro Tour started in 2005 as a way of categorising the top teams in pro cycling and has since become the World Tour. Since this designation became many teams have enjoyed success and failure but we must go back to 2005 for the longest losing streak when Saunier Duval didn’t win a race of any kind until 19 May with Leonardo Piepoli taking a stage in the Tour of Catalonia.

But French squad Ag2r La Mondiale now surpass the second longest losing streak set by Euskaltel-Euskadi in 2005, when they didn’t win a race until 8 May. With no stage in the Giro and Europcar’s Matteo Pelucchi winning the final stage of the Four Days of Dunkirk, Ag2r now beat the Basque team to take second spot in the losing streak status race and now need to win a race in the next 10 days to avoid setting the “record” currently held by Saunier Duval.

I feel bad pointing this out as it is not for the want of trying and they’ve had two second places this year plus John Gadret won a cyclocross race on New Year’s Day and Matteo Montaguti won the mountains competition in the Critérium International. But Ag2r have yet to win a road race of any kind anywhere in the world this year.

Sometimes these things happen and the team can’t get a lucky break. In interviews riders have also spoken about feeling the pressure and fears of a negative spiral.

Perhaps we should note that in other sports the management would have been fired by now. But in cycling the team management often own the squad they merely rent out the naming rights and “real estate” on the jersey, shorts and team vehicles to a willing sponsor. So there is no board or other authority to replace the manager.

It is not all bad luck, there are factors that explain the lack of results. First the team’s sprinters don’t have a proven record, Jimmy Casper is the best bet but it’s not yet worked out whilst Sébastian Minard and Lloyd Mondory are regular top-10 finishers but outright wins are rare. And new recruit Manuel Belletti hasn’t delivered yet.

More broadly they’re the fifth oldest team in the World Tour and a squad than didn’t win much last year either. When it came to making changes to the roster for 2012 not much changed. One shining recruit is Romain Bardet, author of an impressive move in the Amstel when he gradually dropped everyone from the morning break to stay away solo before being caught by the lead group before the final climb of the Cauberg. But other recruits include Gregor Gazvoda, Boris Shpilevsky and Amir Zagari, who whilst all fine elite athletes, were primarily hired for their past haul of points on the UCI Asia Tour rather than their potential to win in Europe.

Meanwhile Jean-Christophe Péraud has been practising for the MTB Olympics instead of focussing 100% on the road. Good for him, he said in a recent interview he’d rather win gold than win the Tour de France and besides, he’s a rare winner on the road. But it’s another factor behind the team’s lack of success.

Looking forward
A Giro stage win looks possible for John Gadret, he won last year after all and given the more open race perhaps he’ll deliver again. If not Hubert Dupont is another candidate for success in Italy so there’s every chance the now disgraced Saunier Duval team retains the dismal record. Back in France there’s also the Tour de Picardie and the Circuit de Lorraine Professionnel, two modest races well within the reach of a UCI World Tour team.

But the risk is that the team feels more and more pressure to win and this makes them lose their cool, for example when in a breakaway they attack too early out of desperation.

But they need to rack up points in order to stay in the top tier for 2013 and beyond. So far the strategy has been to place riders into the top-10 and this does win points. Of course should they win a stage in the Tour de France or take the yellow jersey for a few days then the entire 2012 season will be a success for the sponsor because the publicity generated will be enormous.