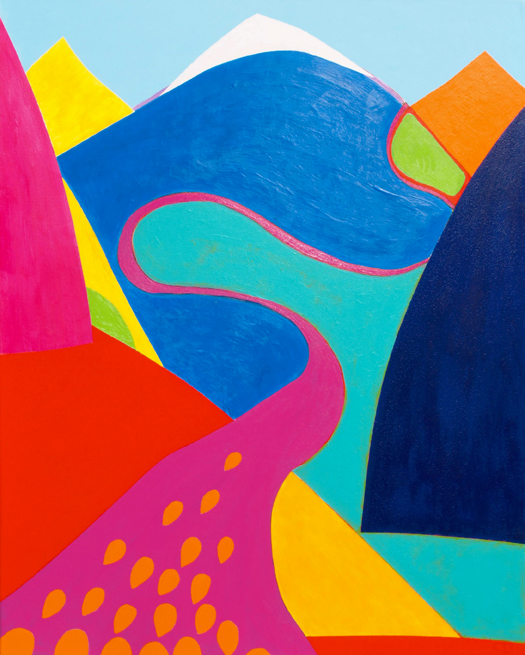 What does the picture above remind you of? No, this isn’t a Rorschach test, it is a painting by British artist Chris Billington. Can you see anything that looks like a bike race?

It was commissioned by an anonymous collector who wanted a painting of the Euskaltel-Euskadi team. Billington explains more:

When my client finally saw “Euskaltel” for the first time she was absolutely stunned and delighted, and told me that it was the most beautiful painting that she had ever seen, in fact she went even further and told me that my colours were a reason to wake up in the morning. Going on to tell me that “Euskaltel” made her want to “Dive into the painting and swim around in my colours and get drunk on them” made me very happy indeed.

The reaction on Twitter was mixed, some liked the vivid image but many weren’t as delighted as Billington’s patron.

Stablinksi remembered
Sunday’s Paris-Roubaix finished on the old velodrome but next door is a brand new indoor velodrome is being built. France has some great sports facilities but it lacks decent indoor tracks. This one will be named after Jean Stablinksi, the 1962 World Champion.

“Stab” was the son of Polish immigrants but his father died in a mining accident. He was forced to start work as a child in the mines of Northern France to provide income for his family. A lucky break followed when he won an accordion music competition and the prize was a bicycle. With this he began racing and earned more than money. Things went full circle as it turns out actually worked in the Arenberg mine under the now infamous cobbled section of Paris-Roubaix. In fact it was Stablinksi who informed organisers about the cobbled track above ground and they incorporated it into the race route.

Stablinksi wasn’t the only Frenchman with Polish origins succeed in France at the time. In 1956 Roger Walkowiak won the Tour de France but his was an unfortunate win. He gained so much time in an early breakaway that, so the story goes, he managed to hold on to the lead all the way to Paris and win by accident. So much so that winning à la Walkowiak became a term used when someone took a surprise win. It even applied outside sport, for example a politician winning an election after an opponent drops out has been described in this way.

In fact he won properly. Yes 31 riders got a move that took 18 minutes early on but he lost the yellow jersey and reclaimed it when the mountains came and fought hard to defend it despite being on one of the weakest teams in the race. There’s simply no easy to way to win the Tour de France. Indeed he was fifth on a mountain stage behind Charly Gaul, arguably the greatest climber of all time. And he won a stage in Montluçon in his home region, where he still lives today.

After my Tour I was criticised, so I decided to put a stop to things

Walkowiak walked away from the sport and has since made only rare appearances. Once in 1967, again in 1988 and then in 1990 where French newspaper L’Humanité met up with him.

Now Bicycling’s James Start has paid a visit. You can read the full interview online and I’d recommend it, he talks about his win, why he walked away from cycling and more.

Today’s race was won by Pierre-Luc Périchon of the small La Pomme Marseille team, trumping the bigger French squads. It’s the oldest continuing sponsorship deal in cycling, with cheesemaker Lepetit sponsoring the race in 1943, although today Lepetit is just a brand in the portfolio of Lactalis, the world’s third largest dairy products group.

Modern business aside there’s an old school theme to the race. Not the unhelpful race website, instead the winner gets a huge cheese as the prize. In the days of Stablinski winning food was a big prize but less so today. I doubt the riders will touch the prize but the team staff will get their share tonight. Otherwise the team car will stink if someone’s transporting it home.

Saur-Sojasun
Talking of changing corporate brands, French squad Saur-Sojasun will lose their main sponsor at the end of the year. In an interview with French site cyclismactu, team boss Stéphane Heulot hints that there’s already a replacement lined up. When asked if there’s a new partner for 2013, Heulot says “yes it’s happening. The future will go on without Saur” but obviously Saur will get their money’s worth this year since the team will ride the Tour de France.