Roubaix and the hunt for cobbles 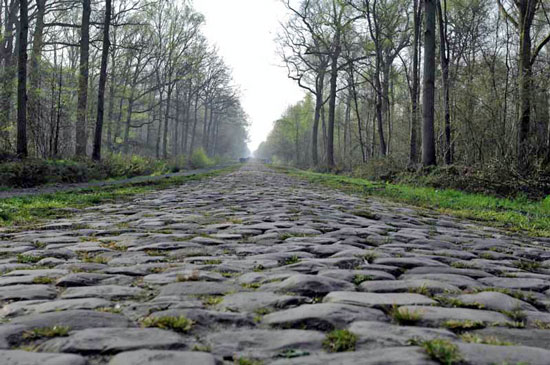 Paris-Roubaix is almost upon us. I struggle with this race sometimes. It is brutal, dramatic and legendary but at the same time a lottery, where results can be determined by punctures, crashes and other random events. Riders don’t get to the front without brute force and skill, but once up there, whether they make it to the finish line involves a bigger degree of luck than any other race.

It’s this cruelty that makes it compelling but part of me finds it a circus. If I had to pick, I’d prefer the Tour of Flanders since the cobbles are decisive but not bike-breaking, and the hills are more obvious strategic points. But of course each race can be enjoyed separately and for all its craziness, Paris-Roubaix is unique and extreme. I can’t wait.

Vanishing cobbles
It wasn’t always so wild. Yes, there was the post-war desolation but things recovered by the 1950s. For many years France kept its cobbled roads, especially in the North. These were not farm tracks but main highways. Today some towns have gone out of their way to preserve them and you’ll still find them in Paris. As such many of the cobbles used in the race for decades were fit for normal transport use, smooth enough to ride and drive over at speed. They were not the farm tracks that make Paris-Roubaix famous today.

Jacques Goddet: "go get me some cobbles"

Bring me pavé
Smooth as many cobbles were, many roads were being upgraded in the 1960s. Faced with the loss of cobbles and his race becoming a dreary procession, race organiser Jacques Goddet instructed his no.2 Albert Bouvet to find more cobbles: “go north and take your pilgrim’s staff“.

Goddet turned to a friend, Jean Stablinksi. The son of Polish immigrants who emigrated to work in the coal mines of northern France, “Stab” himself worked in the mines as a child. He won a bicycle in an accordion music competition as his way out of the mines and eventually into pro cycling. He went on to win the Vuelta a Espana and the World Championships. Retired, he was rider with a good knowledge of the local roads. If anyone knew a few bonus sections of cobbles it would be Stablinksi.

Too hard
Stablinski took Bouvet well away from the traditional route, heading 40km east. It was here that the former miner showed the race organiser the road past his old mine in the Arenberg forest, the now infamous Wallers-Arenberg section. Stablinski would work down in the mine but never rode past it when he became a cyclist, “too hard“.

Stablinksi later admitted to feeling guilty about telling the race organisers about this stretch of pavé. Even the race organisers were concerned it would be too hard. After adding Arenberg and other nearby sections a worried Bouvet asked aloud “And what if nobody makes it to the finish?” a few days before the race. “So long as there is one rider” replied the stoic Goddet. Indeed, come the day it was none other than Eddy Merckx who made it to Roubaix, his first win in the Hell of the North.

Pavé Nouveau
Goddet and Stablinksi were responsible for adding the Arenberg and other sections but new sections of cobbles are still being “discovered” to this day. This Sunday’s race will see three additional sections compared to 2010: Aulnoy, Famars and Millonfosse. Although the first two of these have been included in past editions, Millonfosse is a first.

Bouvet’s replacement these days is current race director Jean-François Pescheux. He’s been designing the course for some time, including visits in the 1980s when he worked with Bouvet himelf. On one pre-race visit they had to get their car towed out of mud by a tractor, according to Vélo Magazine. When visiting the section at Haveluy this winter winter Pescheux told Vélo “it was covered in mud, you couldn’t tell the difference between the road and the field” and it was only thanks to a local race organiser that Pescheux and his assistant, ex-pro Thierry Gouvenou, learned of this new section. Even the reconnaissance trip was tough, their car getting two punctures.

Changing history
A bit like the Tour of Flanders seeking out new climbs and adding the Koppenberg in recent times, Paris-Roubaix might be a historic monument race but that does not mean the course is unchanged. The resurfacing of cobbled roads drove race organisers to seek new routes, often picking the more extreme cobbled tracks that were spared from traffic. The iconic Arenberg section, for all its historic significance, is a modern-day addition to the race. Indeed even in the 21st century new sections are being discovered and added to the parcours.

It can’t be said that the race is more extreme than its early days. But the race once represented a normal journey from Paris to Roubaix. In 1896 the rough roads were the norm for horses and even the railway line was slow. The distance involved was huge, something nobody undertook without good reason and self-reliance could be needed to reach the destination.

Carbon meets cobble
Today you can carelessly travel from Paris to Lille in under an hour with the TGV train. As such the race has a new sense, it borrows the hardest roads and tracks possible to make an unusual test that celebrates the extremes of the pavé, rather than a reality, past or present. Cobbles will battle with carbon rims and more often than not it is the cold stones that decide who wins.