UCI waive their own rules to let Kolobnev join Katusha 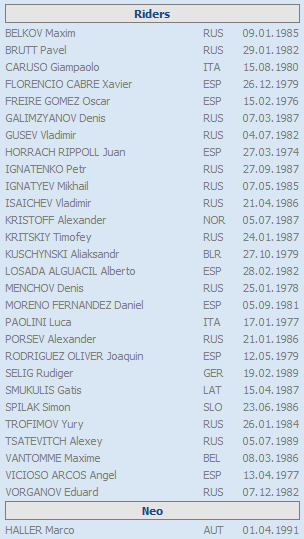 How good is your maths? If you can count, have a go at the number of riders listed on the Katusha team as of tonight on the UCI website. I make it 28 riders and one neo, a total of 29 riders.

All seems normal so far. Only the Russian team today announced it has signed Alexander Kolobnev. And that is against the UCI rules.

Background
Kolobnev was with Katusha until last July when he tested positive for a banned substance during the Tour de France. At the time I thought he got treated roughly over this. Since then the Russian Cycling Federation heard his case and gave him a light sanction. The UCI disagreed with this and took the case to appeal at the Court of Arbitration for Sport. The CAS ruled in February, throwing out the UCI’s appeal. You can read the summary details of the case online at the CAS.

Cleared to ride, Kolobnev has been free to join a team. Only normally there would be no room in the Katusha team as they’re capped at 29 riders. Here’s the rule on team size:

2.15.110 Riders The number of riders in each UCI ProTeam may not be fewer than twenty-three (23). The maximum number of riders per UCI ProTeam which may be registered with the UCI is restricted according to the number of new professionals under contract (within the meaning of article 7 of the joint agreement concluded between the CPA (Cyclistes Professionnels Associés – Associated Professional Cyclists) and the AIGCP (Association Internationale des Groupes Cyclistes Professionnels – International Association of Professional Cycling Teams) in the following manner:

So a squad with 2-5 neo pro riders can have a maximum of 30 riders, whilst a team without a neo-pro is capped at 28. Katusha has one neo pro in Marco Haller so the maximum number is normally 29 riders and this is the number they were at prior to signing Kolobnev.

What’s happened?
The UCI has waived its own rules here. This looks like less of a bungle than last autumn’s farce with Astana where a rider suddenly retired with a back injury after the UCI let the Kazakh team sign a rider mid-season, taking the team size over the permitted limit but nobody noticed for a while.

Instead the UCI has, according to a tweet from Kolobnev’s PR agent Laura Messeguer, granted an exception “because of the trial and the lost time“. There’s some fairness in this, especially since I believe Katusha wanted to sign Kolobnev last winter but held back because the UCI was taking the case to the CAS and signed someone else. Since the UCI went on to comprehensively lose the case, the appeal can be seen as a waste of time and a brake on Kolobnev’s career.

On the other hand, making exceptions to the rules is a risky business, especially when the rules don’t offer any flexibility on team size, specifying team size with arithmetic precision. Especially when the team owner, Igor Makarov, also happens to be one of the UCI’s most senior UCI official.

Summary
Normally Katusha would be capped at 29 riders but the UCI seems to have waived its own rules to let Alexander Kolobnev join the team.

There’s some fairness in this given it was the UCI’s fruitless appeal that blocked Kolobnev from signing over the winter. Then again it can be fraught when the governing body starts being selective with its own rules, especially when the rules waived happen to suit the interests of a senior official and the team he owns.

Next post: Tour of Flanders build up (Nieuwsblad adverts)