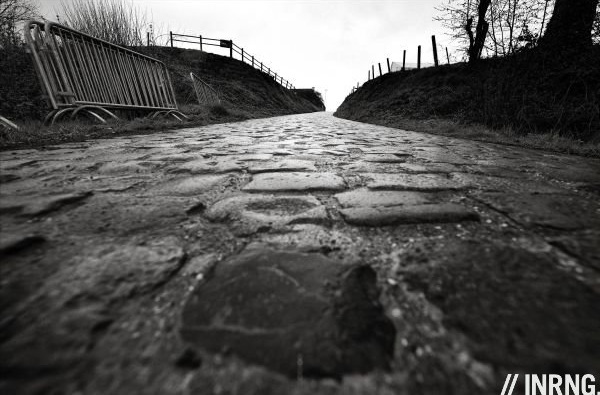 What’s the biggest one day race of the year? The World Championships? The Olympic road race? There’s plenty to say this Sunday’s Tour of Flanders is the biggest and the best. A combination of the route, the prestige, the history and the roadside crowds make this race unmissable.

The Route | The Contenders | The Weather | TV Viewing | Startlist | History

The Route
All change for 2012. The route has moved over the decades but this year’s edition is a big shift. The finish moves from Meerbeke to Oudenaarde but crucially the race will include three finishing circuits. These are not three laps of the same circuit, rather the race heads for Oudenaarde and then loops out in a different direction on three occasions and during one of these loops there is a section that will be repeated again. Confused? You’re not alone, several riders have got lost trying to follow the route in the past few weeks and months. But each of the three loops contains the climbs of the Oude Kwaremont and the Paterberg.

The consensus says this is a hard route that will wear down the riders and force a selection. There’s a business justification too, looping round allows the race to pass beer tents and VIP grandstands several times but that debate’s for another day.

The first cobbles don’t come until 91km into the race and the first climb, the Taaienberg does not appear until 109km have been covered. The race will be on but if Taaienberg is often Tom Boonen’s launch ramp in other races, this is too early. A collection of cobbled streets and climbs appear until the 155km mark. Shown in green above I suspect the pace will be fast here but the aim for the favourites will be a balance of energy saving and positioning near the front to avoid troubles. Things pick up for the last 100km, the race heads to Oudenaarde and the first ascension of the Oude Kwaremont climb.

The approach: before mentioning the climbs, a word about the approach to the climbs. The climbs are short and whilst some are steep, everyone in the race can get up them with a clear run. However they are narrow, sometimes wide enough for just one car. So when 200 riders are in a race there’s a huge premium on being at the front. As a result the pace is frantic before the climb and often the approach to the climb is worse than the ascent itself. The pace reaches 60km/h as riders try to squeeze into impossible gaps… all whilst cornering, dodging bad road surfaces, spectators and street furniture. Make a mistake and you lose 20 places. Riders rub shoulders and elbows are used to defend your space. This is cycling as a contact sport.

The Oude Kwaremont: it’s a climb but different from your usual Flemish berg at 2.2km long and a meagre 4.2% gradient. It starts with asphalt for 600m then you have 1600m of cobbles. Above all, instead of a steep ramp, the “Old Quarter Hill” is longer and steadier. It rises early to 11% and then levels out. The cobbles are better maintained too, plus there’s a gutter to aim for on the left. It is tackled three times, after 177km, 218km and 238km. 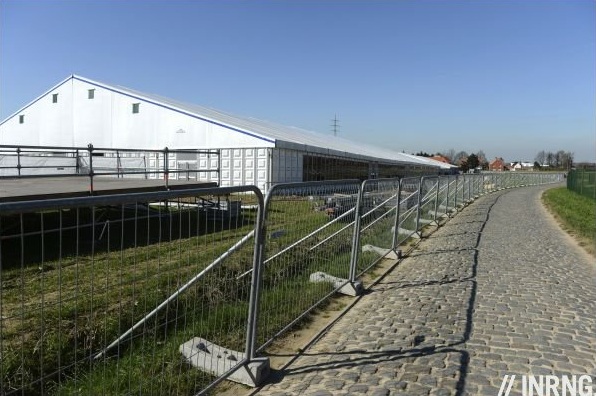 The Paterberg: less than four kilometres from the Kwaremont, the Paterberg is another awkward climb. At just 400m, averaging 12% and maxing at 20%, it is short, steep and cobbled. It is also exposed with almost no cover from hedges, embankments or trees. Instead the sides of the road are lined with barriers and the surrounding fields have large beer tents. The photo above shows the inert scene, imagine it with tens of thousands of fans beer-saturated fans roaring the riders on.

Next it’s on to the legendary Koppenberg climb (for more on the history, see last year’s “The Koppenberg” piece). It’s too early in the race to determine the winner but make a mistake here and you can lose the race. The cobbles are still rough and it maxxes at 22%, meaning momentum is vital. In other words you need to be at the front of the bunch.

Soon there is the final circuit and 1-2 punch of the Oude Kwaremont and Paterberg before the race heads for the finish. With 13km from the top of the Paterberg to the finish line there is both time to regroup… and time for the race to fragment as the distance and climbs takes it toll.

The Finish: the last section from Kerkhove to the Minderbroedersstraat in Oudenaarde is over eight kilometres long in one straight wide line all the way to the finish bordered by cycle paths. There are no sharp corners, roundabouts or hills and it is totally flat. The featureless nature is still highly strategic. Any rider up the road will a small gap will be visible to chasers and the even nature of the road suits a group in pursuit. It is also the chance for dropped riders to come back to a peloton. The final kilometre is flat and straight with the tiniest of rises to the finish line.

Course summary: 255km on familiar roads but the format is different with the finishing circuits. The distance and climbs make this hard and the riders will make it even harder. It’ll be interesting to see how the riders approach the race in its new format. I can’t help wonder if the course is more predictable with the “rinse n’ repeat” format of using the same climbs again and again in a strength-sapping finale rather than the coup de grace delivered by the Kapelmuur we had in the past. Then again the Oude Kwaremont is a formidable climb given its length and followed closely by the Paterberg to double up the damage. Over to the riders.

The name: it might have “Tour” in the name but don’t confuse this with stage races, this is a one day race. It is often known by its Dutch title, the Ronde Van Vlaanderen.

It doesn’t really tour of Flanders either. The map above shows Flanders from Oostende and the coast across to Genk and Hasselt in Limburg to the East. There are five provinces, Antwerp, Limburg, Flemish Brabant, East Flanders and West Flanders. The race sticks to the last two.

Many say Tom Boonen and Fabian Cancellara are joint favourites but I’d put Boonen ahead. Why? The Belgian has a very strong team and in the last few days we’ve seen Sylvain Chavanel winning in De Panne and constantly near the front of other races. Niki Terpstra won the Dwars Door Vlaanderen and there are other Boonen can count on. Even better, Boonen sprints faster than Cancellara should a group arrive.

However Cancellara is only just behind. In supreme form, we saw him get a small gap in the Strade Bianche race and the riders didn’t see him again until he climbed onto the podium. He’s been painted as a pedalling ox in recent weeks, powerfully dragging riders around but in reality he’s a clever rider who will have a course that could allow him to put on a tour de force. Plus his team is strong with Bennati and the promising Gallopin.

Peter Sagan is another obvious choice. The nonchalant Slovak has been collecting strong placings this season as well as sprint wins. He won the opening stage of the Three Days of De Panne, taking the bunch sprint… after he’d spent plenty of energy trying a breakaway. Sagan plays a 1-2 with his bodyguard Daniel Oss. We could see Omega Pharma – Quickstep do the same with Sylvain Chavanel, I think he might prefer Paris-Roubaix but with Boonen being marked by many, the French champion could slip away. 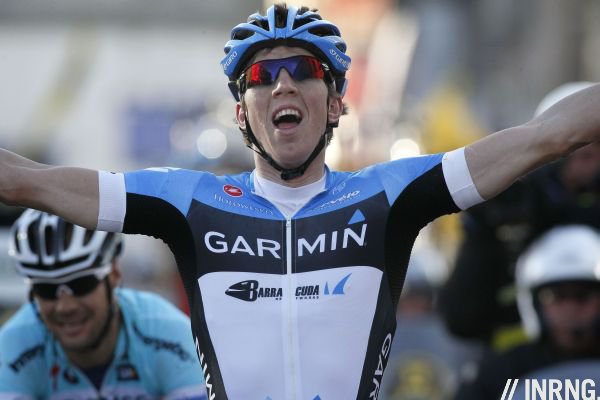 Sep Vanmarcke should win the Tour of Flanders one day. Whether it’s this year or another, we’ll see. But he’s proving physically capable and above all, mentally strong whether in assuming team leadership or a cool head during a race, like when he won the Omloop Het Nieuwsblad last month.

Team Sky’s Edvald Boasson Hagen is a random pick as his performances vary, strong one day but with many off days. He is incredibly versatile through, able to climb and sprint. On a team packed with ambition for the whole year, this is his chance.

Going through the others, BMC come with Alessandro Ballan and Greg Van Avermaet: the former is strong but lacks a finishing sprint whilst the latter seems to race nervously, attacking early when he could save his energy better for later moments. Rabobank’s Matti Breschel is back in form and will aim to “save” a lacklustre season so far for the Dutch squad. Pippo Pozzato is back to full strength. Who’d rule out Oscar Freire? Whilst the route might offer some climbing the riders might not blow the race apart and the Spaniard has come close in recent weeks, this time let’s hope he’s checked out the new finishing straight as not knowing the finish of the E3 apparently cost him the win. And watch Sebastian Langeveld, Bjorn Leukemans, Stijn Devolder, Luca Paolini and Daniele Bennati.

Weather
The sunny spring weather is going. There’s talk of a shower on Saturday but Sunday will be mostly cloudy with a high of 12°C (53°F). There will be a light wind from the north/north-east at 10-20km/h.

In practical terms this means the cobbles are baked dry and a light crosswind for much of the circuits and a headwind on the finishing straight.

TV Coverage
It’ll be shown live on Eurosport across Europe with Flemish broadcast Sporza starting at 9.00am Euro time with pre-race chat. The actual race coverage will start soon after midday with live video at 12.45.

In the US it is live on NBC Sports Network from 8.30am Eastern Time in High Definition with commentary from the tandem pairing of Phil Liggett and Paul Sherwen.

There will be internet video feeds for viewers around the world, be sure to see cyclingfans.com and steephill.tv.

Startlist
The full list is available as a PDF and this is now confirmed as the final version.

Race History
First run in 1913 by Carolus Ludovicus Steyaert, a journalist who used the nom de plume Karel Van Wijnendaele. This Sunday’s event is the 96th edition since the First World War stopped the race.

It was run during the Nazi occupation of Belgium, making it one of the few races to continue during this period and it is said German soldiers help control the route. This apparent collaboration saw race organiser Van Wijnendaele banned from journalism following the end of the war but it turned out he had given shelter to fallen British aircraft crews and was subsequently cleared.

Alberic “Briek” Schotte started the race no less than 20 times, finished 16 and won twice. He died on the day of the 2004 race. Belgians Achiel Buysse, Eric Leman, Johan Museeuw and Italian and Fiorenzo Magni each won the race three times. Two riders competing on Sunday have won the race twice, Stijn Devolder and Tom Boonen.