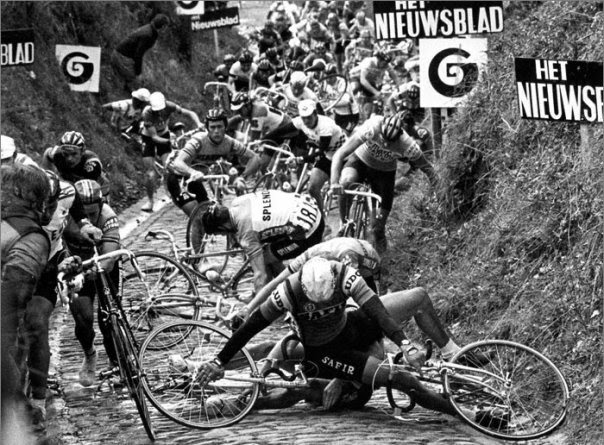 One of the most feared ramps of the Tour of Flanders, the Koppenberg is 600 metres of cobbles. It comes as the ninth climb, after 181km, so it is not usually a launchpad for the win. But it is highly strategic. The photo above is one of many from over the years, crashes are common the slippery cobbles and many have to complete the climb on foot. Lose momentum, lose the race.

Indeed the climb was removed after the 1987 edition and didn’t return until 2002, after it was resurfaced and widened. Even then it only lasted a few years before it was again avoided. But it’s back on the parcours. The difficulty lies in the gradient, maxxing at 22% for a moment. Now that’s fiendish on a tarmac but you have to try it on the cobbles just to believe it. Then give it a go when the kinderkopjes are wet. It is very steep but get out of the saddle you lose the rear wheel and can slip.

Old but new
Its name means “Heads hill”. The road is a track that, over hundreds of years, has seen the weight of feet, hooves and wheels cut into the hill. Now it acts like a ditch and is often wet, run-off water from the farmland drains onto the track. 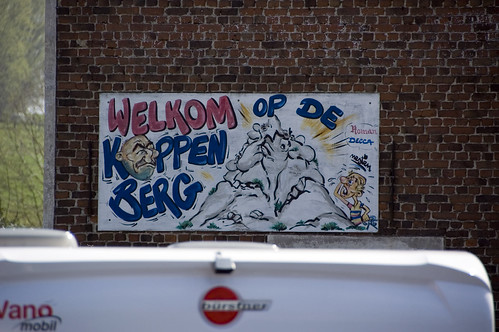 By the 1970s Belgium was updating much of its road network, including tarmacking many of its cobbled roads. So the hunt for hellingen was on. For years the Koppenberg climb was merely a farm track, including a cobbled section. Because of its rough surface and steep slopes few used the route, as a result almost no one knew about it. It seems hard to imagine people missing a road but it just an old farm track that was best avoided.

As they toil up, the riders can thank Hubert Hoffman, a resident of Melden. It was he who informed race organisers about the hidden track and it was duly included in the race in 1975. But it was kept secret for some time by none other than Walter Goodefroot, winner of the Ronde in 1968 and 1978. He used it in training but did not want to tell others about the road, “I didn’t want to have this sort of climb in a race” he told L’Equipe.

As much as the climb is now part of cycling legend, it has only been used 21 times in the race but that means it still gets into the top-10 of most used climbs. Now it is a celebrated part of the Flemish landscape and contributes to the local economy with many cyclists making a pilgrimage to the town of Oudenaarde in order to try the infamous slope for themselves and visit the local Ronde van Vlaanderen museum, which celebrates the race.