Having predicted trouble ahead for Spain, I didn’t think it would come to this. The Tour of Basque Country, Volta a Catalunya and the Clasica San Sebastián are all under threat because of financial woes. This story has been in the Spanish media and now cyclingnews.com relays the news.

There are many races in Europe, arguably there are too many races. But I’m talking about the smaller events and the trio of Spanish races named above are three of the biggest ones in Spain, they are loaded with tradition and prestige. If these events are in trouble, Spanish cycling is in trouble.

There’s a cacophony of competing interests. The Basque organisers have said “we will wait until next week to see if any solution can be found. If none is forthcoming we will call a press conference in which we will announce the disbanding of our organization and the disappearance of the two races” which is regrettable. Not just because we’re suddenly so close to the deadline but because anyone considering working with the race organisers probably doesn’t want to deal with such hotheads.

For all the worrying headlines I hope things will be fixed. In order to run the Tour of Basque Country and the Clasica San Sebastián organisers need to make up a shortfall of €150,000. That’s manageable, even if it is probably a chunky percentage of the total race budget. 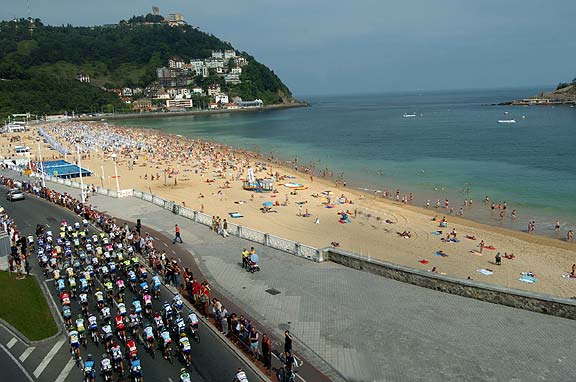 There are solutions out there. Tour de France organisers ASO own half of Unipublic, the company that runs the Tour de France and it has been trying to add the Basque races to its portfolio. ASO seems ready to step in here.

In addition, the UCI is also now involved. In a press release issued earlier today, the governing body is ready to help too:

UCI is also in the process of collecting all the information necessary in order to come up with an intervention strategy that can deal with the urgency of the situation and at the same time the principals of solidarity that govern the UCI WorldTour.

The UCI reiterated that in 2011 a contribution from the UCI WorldTour reserve Fund was deployed in favour of the GP Ouest France de Plouay, a French UCI WorldTour event.

Still the UCI’s press release is courageously optimistic because it cites the precedent of UCI actions saving races. Yes the UCI is able to get people together and it could help with some money. But the sport’s governing body cannot plug holes in every race organiser’s budget, the cash can only appear in certain circumstances. For example I think the two World Tour races in Canada are run at a loss but the organisers absorb this hoping to turn a profit in the years to come. If the Spanish get money, maybe other race organisers will beat a path to Switzerland and ask for help. I hope the UCI doesn’t get hopes up too high in Spain.

One thing to note is the politics of this. Not the politics of regional government in Spain where various tiers can complicate the funding of a race but instead the politics of pro cycling. We have the UCI and ASO both lurking and ready to dangle serious amounts of money here. The money doesn’t come for free and both the UCI and ASO have an agenda when it comes to controlling the calendar of events. ASO already runs many of the sports leading races in France and beyond; the UCI is now expanding into race promotion via its Global Cycling Promotions business and has a vested interest in promoting its own World Tour that is now amplified by its GCP involvement. Hopefully the races can be saved for noble reasons of sport and heritage but let’s at least recognise additional motivations.

Summary
There are probably too many races on the calendar and if some disappear it will be sad but part of the sport’s evolution. But the three races here are significant events that merit a place on the calendar.

The Basque and Catalonian regions are two of Spain’s wealthiest areas and the Basque country is a real hotbed of cycling. Even if Spain is caught in a downturn the money and passion must be there to save these events. The San Sebastian race is a giant promotional tool for the city’s twin beaches; the Catalonian race allows us to explore the inland area less frequented by tourists who flock to the coast and Barcelona, Europe’s party city.

Nevertheless keep an eye on the outsiders circling with money. The likes of ASO and the UCI can help but they have an agenda.