Paris-Nice, a history of innovation 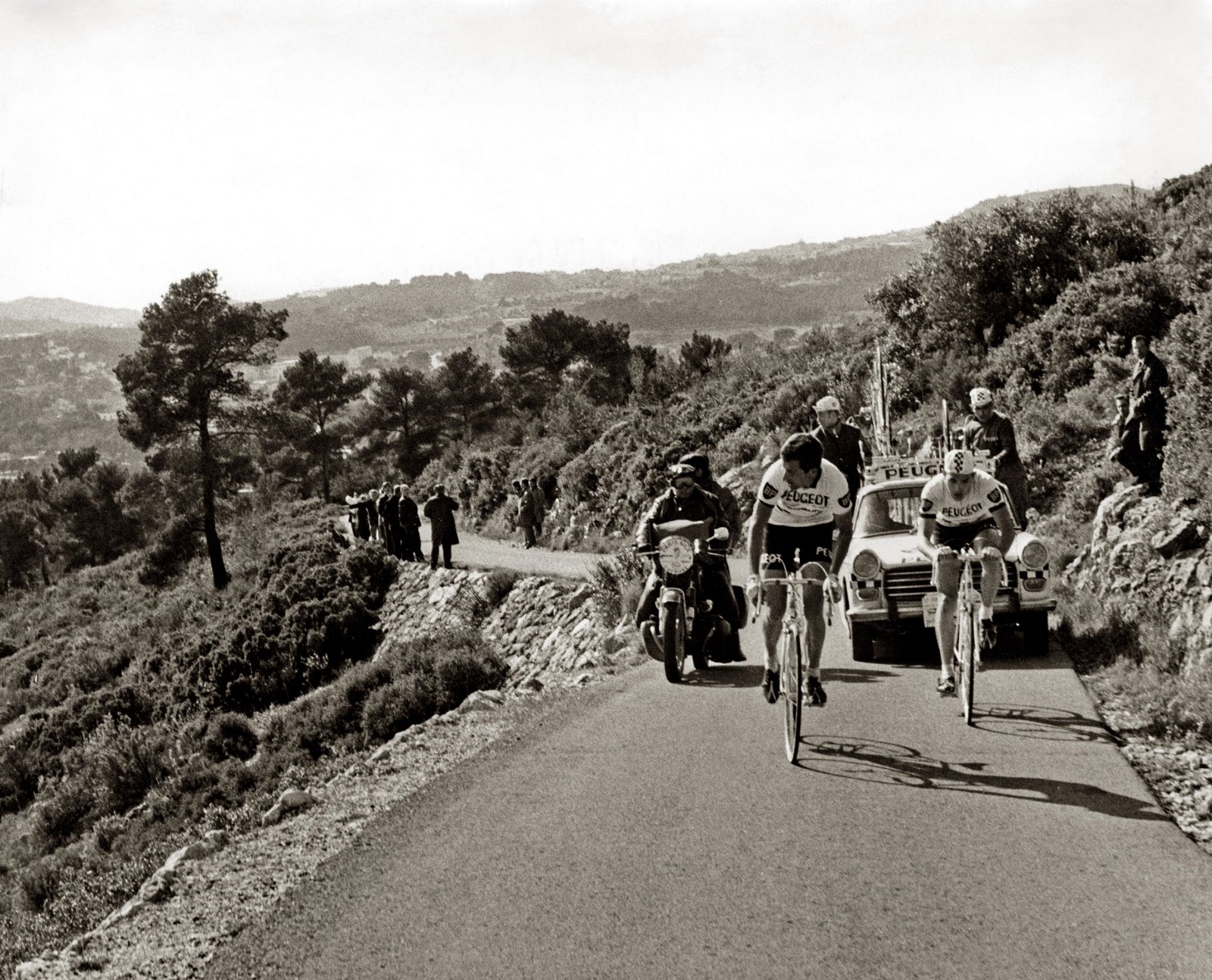 Paris-Nice starts this Sunday and you’ll find a race preview with a permanent link at the top of the page.

But first a look back because this is a race of innovation. Over the years it has welcomed exotic teams, transported riders by air and invented new race rules. Through the race’s history we can trace the evolution of the sport we know today. With other races in trouble today, Paris-Nice can perhaps provide some tips for success.

Local history
150 years ago and the Mediterranean coast of France was no more than a collection of fishing villages. The Riviera we know today, with its hotels, beaches and bustle is a modern thing. Throughout the second half of the 19th century, aristocrats from northern Europe began to congregate on the south coast around Nice. Russia’s imperial family regularly spent their winters there. Their wealth followed and contributed towards the construction of a coastal railway line and tourism grew. American entrepreneurs apparently imported sand to create the beach in Cannes, the town now famous for its film festival.

Despite the spread of the motorcar and a growing railway network, in the 1930s France was still a vast country. Historian Fernand Braudel wrote of the “tyranny of distance”. With different climates, diet and vegetation, Nice and Paris might be in separate countries. What better way to link them than a bike race?

From the track to the open road
One man with a foot in both places was Albert Lejeune, owner of Le Petit Journal, a Parisian newspaper and Le Petit Niçois, a Nice-based newspaper. Le Petit Journal was one of the first newspapers to back cycling. In 1891 its editor Pierre Giffard started the Paris-Brest-Paris race. Lejeune hit on the idea of a race to rival the six day races on the track, using roads to provide readers with more drama. Six day racing was very popular but the riches went to the promoters from ticket sales rather than the newspapers covering them. Thus the Six Jours de la Route race started in 1933, the “six days of the road” and it allowed the stars of the sport a chance to get used to tarmac after a winter spent on the boards.

Today’s race is a mini Tour de France with time trials and summit finishes but the early version was designed to help ease track cyclists onto the road and used the Loire and Rhone valleys instead of the nearby mountains. The first version started outside the Café Rozes on the Place d’Italie in Paris.

Since its creation the race has changed format considerably. War interrupted the race but once the conflict and occupation ended, it was only run in 1946 before it returned in the 1950s. In 1951 it was reborn as “Paris – Côte d’Azur” and finally in 1954 it took the name Paris – Nice. But not for long as it later became Paris – Nice – Rome but the 2,000km run was considered too much and it returned to being a French race.

Leulliot, the innovator
Jean Leulliot became the full time race organiser in the late 1950s. First a journalist, he had worked for L’Auto, forerunner of L’Equipe today and the newspaper that ran the Tour de France. During the war years he ran the Circuit de France, a copycat race mirrored on the Tour de France but this was a dismal failure on all fronts: sponsors were scared away, some of the results were falsified and at the end of the war Leulliot faced trial for collaborating with the Nazis. Luckily for cycling he was cleared as he was a force of innovation.

He died in the 1980s and his daugher Josette ran the race. The race was then bought by Laurent Fignon, the French champion retired but could shake what the French call the virus de cyclisme and a champion on the bike, Fignon found himself in the deep end when it came to dealing with local mayors, co-ordinating police escorts and gathering sponsors. But he succeeded, just, and eventually sold the race to ASO.

Battles and rivalries
The race has attracted champions and developed its own myths and legends over the years. 1966 saw the rivalry between Raymond Poulidor and Jacques Anquetil reach a new level. To the surprise of many Anquetil was beaten by Poulidor in the time trial stage but took the lead back on the final stage. But the race was not over as the official results were not agreed until well after the race finished as Poulidor’s camp accused Anquetil’s team of using physical force to ride Poupou off the road. Finally Anquetil won.

By 1972 Anquetil was helping to organise the race but Poulidor’s life wasn’t any easier since he had to contend with Eddy Merckx in full cannibal mode. The Belgian was dominating everyone, going for intermediate sprints, tussling for bunch sprints and with one stage to go, in the overall lead too. The prize that year was a motor boat and Merckx was so confident of the win and the prize he visited the boat on the morning of the final stage for a photo session with “his” prize. But race organiser Leuillot needed some drama and offered Poulidor 10,000 francs if he won. The incentive worked and the Frenchman beat Merckx.

The race took an Irish twist in the 1980s with Stephen Roche and Sean Kelly battling for the win. Roche won in 1981 as a neo pro. Then Kelly took the race every year from 1982 until 1989.

Paris not so nice
It might be the race to the sun but often the riders face grim conditions on the way. In 1951 the local government ordered a gang of labourers to clear the Col de la Batterie of snow ahead of the race. Often whole stages have been ridden whilst the snow falls and in 1980 the riders finally had enough of this and protested, organising a peloton strike. But as usual in cycling, the bunch didn’t unite and only 43 riders took part and the race organisers threw 11 of them out of the race. In 1994 the race embraced the snow and finished in the ski station of Vaujany.

In 1982 300 protesters blocked the road. Bernard Hinault cleared the road with his fists.

Col d’Eze
Eze is a village on the coast near Nice more famous for its tourist trap walled medieval village. For cyclists there is a road up on both sides and for the first time in 1969 the climb was used for an uphill time trial. The start point has varied over the years but typically the climb is 10km and riders average close to 30km/h. Big ring territory.

Today
ASO is becoming less conservative but the innovation has slowed somewhat. The race has a classic format that resembles a mini Tour de France in the early season. A fixture of the calendar with stable finances perhaps it doesn’t need to change that much?