The pain in Spain

The Spanish economy is set to shrink this year, continuing the funk it has been in since 2009. Unemployment is over 20% and climbing. Set against it’s no wonder that several races are under threat in Spain.

Pro cycling depends on government funding and corporate budgets and across Europe times are tough. But not for all.

Only this week we get news of two races in trouble. First Biciclismo brought us news of the Vuelta a Castilla y León in April being shortened to three days. Race organiser José Luis López Cerrón – coincidentally the man who apparently brought clenbuterol-laced meat to Alberto Contador in July 2010 – said that the recession is biting and that both municipal budget cuts and uncertainty over the contribution from Caja España, a bank that sponsors the race, is leading to the cuts. Second the GP Miguel Indurain is also under threat, the same budget shortfalls mean the race is in in peril and this time, since it’s a one day race, its future is in doubt. Once a race drops off the calendar, resurrecting it is  hard.

And this is just the bad news this week. Last year the Vuelta a la Comunidad Valenciana vanished for good and more recently the 2012 editions of the Majorca Challenge and the Vuelta a Murcia have been cut by a day to save costs. Plus there’s uncertainty over the Euskaltel-Euskadi team, it looks set to continue but nothing is signed for now.

One effect of this could be more cycling, or at least more cyclists. If headline unemployment is over 20%, youth unemployment in Spain is 49.6%. I can’t help wonder if a lot of young people will have more time to ride. Racing, with prize money and possibly a contract, becomes even more attractive. A wider pool of riders means more world class riders come through; then again detection and coaching is often the product of big money too, see the well-funded systems in Britain or Australia.

Beyond the Pyrenees
This slump isn’t unique to Spain but the country stands out because, unlike Greece, cycling is substantial sport. Other countries in Europe have their problems, this morning’s newspaper headlines in France cover the record levels of unemployment announced yesterday. In response President Sarkozy is rumoured to be considering a significant tax change, raising sales tax in exchange for a cut in the payroll taxes. You might not care about French tax rates but high payroll taxes affect cycling because French teams struggle to recruit big name riders in part because tax makes this more expensive. 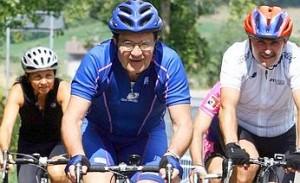 Meanwhile Italy has replaced its entire government with unelected technocrats charged with saving the economy; the new premier Mario Monti is in fact a keen cyclist and can be spotted on the roads of Varese on a Sunday morning.

Some good news
It’s not all doom and gloom. The Polish economy enjoyed 4% growth last year, the likes of Quickstep and Liquigas have several Poles to help sell wooden flooring and gas back home; yesterday the Tour of Poland won an award as the country’s best sports event. The nearby Baltic states of Lithuania, Latvia and Estonia are bouncing back after a deep slump. Switzerland is doing ok and its currency is as solid as ever, good news if you’re a UCI official on a Swiss salary; bad news if you’re a rider or team fined in Swiss francs. Belgium grew ok in 2011 despite not having a government in place for most of the year, new races are appearing and semi-classics are stepping up to the Pro Tour calendar.

Summary
Many European countries are caught in a prolonged economic slump. Pro cycling does not exist in a bubble, it is dependent on state and corporate spending and shrinking budgets bring cuts to the calendar and more. Spain stands out with several races under threat but this is true in other countries.

It’s not all bad news, even in Europe new races are appearing and the sport is spreading around the world. And if the bad news is too much for you, life goes on. Even on a reduced basis there is still a lot of racing in Spain.