A few small pieces from the weekend that are worth mentioning but to short to warrant a full piece. 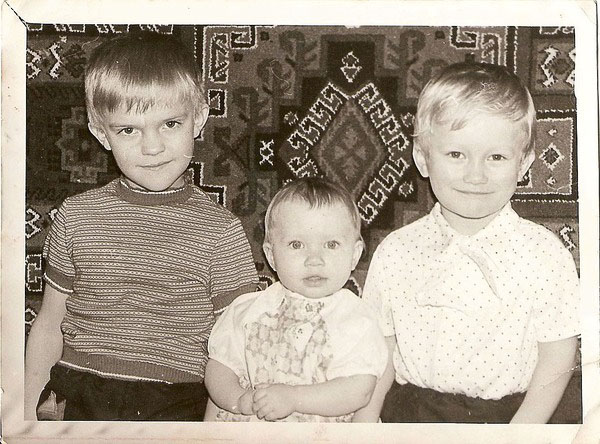 Does the angelic face on the right look familiar?

It’s the less than angelic Alexander Vinokourov. The Astanfans website offers a great read about Vinokourov’s past. As well as some amusing early-life photos and reports of a carrot-heavy diet, it mentions that “as a child, Alexander collected stamps, used to be a philatelist, and dreamt to be a manager“. A change from the common boyish ambitions of becoming racing driver or cosmonaut but it’s notably more realistic. He is set for a final season in 2012 and could well take on managerial role with the Astana team beyond this.

The French brand is going to be the jersey sponsor for the 2012 Tour de France but they are branching out into other parts of the sport, including Italian vintage competition L’Eroica. Their campaign is very reminiscent of London outfit Rapha, complete with “men getting ready to ride” photography that mysteriously glamorises putting a wheel into a frame. This time though it’s very much in colour. I’m not here to publicise them but the photography and music suggests the Tour de France yellow jersey might get a makeover… and that a truckload of Tour de France merchandise is coming down the line.

I’ve reviewed podcasts on here before (put podcast into the search feature on the right) but many seem to come and go, partly because it requires a lot of effort to make notes, get the recording right, edit it and then make money just to cover the costs. The Velocast was an early favourite, in part thanks to the relaxed vocals of Scottish presenters John and Scott who sounded like broadcast pros. But it stopped, although they’ve kept a regular presence on the internet, especially via Twitter.

Now they are back to podcasting. Episode one sees them muse over various things in the world of cycling, from pro racing to new bikes. But the format is different as they do it whilst playing music they like in between different segments. It’s just like listening to a radio show.

The thing with music is that it’s personal, you can share a love of cycling but musical tastes vary so this might not please everyone. But the enjoyment of cycling and music is quite audible and it’s worth checking out. If your musical tastes don’t match, the classic format of John and Scott talking without music is in the works for 2012.

It’s available via iTunes too.