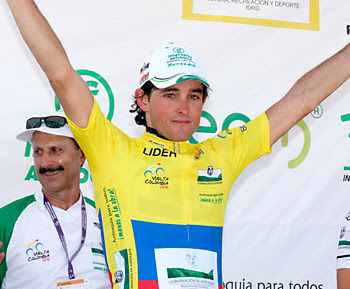 At the start of his pro career many found Óscar Sevilla so fresh-faced they wondered if he was a junior. Now just days from his 35th birthday, his image is less angelic and it’s not just the passage of time. Yesterday he was given a six month ban by the Royal Spanish Cycling Federation (RFEC) for a doping offence.

A positive test occurred 13 months ago in the Vuelta a Colombia but it’s not been a black and white story.  The  substance detected in his sample was hydroxyethyl starch (HES). HES is only a banned substance when injected intravenously as it can be used as a masking agent, specifically because it inhibits the excretion of banned substances: put simply it could EPO out of your urine. Outside of doping it is more commonly used “blood volume expander”, often for patients suffering big blood loss, and its use could also fall under the “prohibited method” of blood doping. But the authorities are faced with having to prove either the intravenous use or the manipulation of blood.

The most interesting element in Sevilla’s case is that he didn’t decided to tough it out and say “prove it” to the prosecutors. Instead he freely admitted to using HES for what his Gobernacion De Antioquia team call “urgent medical treatment”.

Now this gets odd because he was caught on the last day of the Vuelta a Colombia and if you need HES for medical treatment you are undergoing major surgery or have suffered dire injuries, you’re not riding a bike. Here’s Wikipedia on the subject:

an intravenous solution of hydroxyethyl starch is used to prevent shock following severe blood loss caused by trauma, surgery, or some other problem

If Oscar Sevilla needed HES in the middle of a stage race then surely he must have suffered horrific injuries during the race or undergone major surgery overnight? Only this was never reported and all we know is that he was healthy enough to win a time trial on the day.

There’s been no further statement from the RFEC but if he needed such urgent medical treatment then why ban him? But above all, what assurances did the RFEC get on his medical condition. If this banned substance was needed, where was the Therapeutic Use Exemption document (post-dated versions are acceptable for medical emergencies)? If no adequate explanation for HES exists then six months is probably not enough. And why did this take 13 months? We’re left with more questions than before.

Enemy action?
Two other Spaniards tested positive for HES around this time but never reported a medical incident. David Garcia Da Peña got banned after he tested positive for EPO but HES was found. His team mate Ezequiel Mosquera is still in limbo after HES was found in his urine too but no EPO. “Once is happenstance. Twice is coincidence. Three times is Enemy Action” wrote Iam Fleming in a James Bond novel.