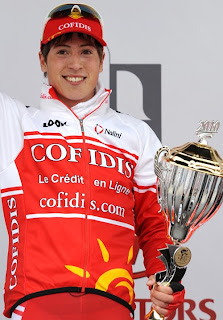 Jens Keukeleire’s no slacker. A neo-pro, he’s made a name for himself with three wins in a short space of time, the GP Le Samyn, the Noekere-Koerse and the Driedaagse van West-Vlaanderen. Not the biggest races but a neo-pro would bite your arm off to make the front group, yet alone win.

When he joined Cofidis for 2010 he met up with the team in their first training camp. Whilst several riders on the squad live on France’s Côte d’Azur and enjoy mild Mediterranean weather, Keukeleire still lives at home in Brugge. As a result, like many, he had his winter training reduced by one of the coldest winters in decades.

But that didn’t seem to slow him down. At the first training camp he was racking up some impressive wattages in effort tests. The inside view from his team is that whilst he’s won some sprint finishes, he’s got much more under the bonnet: he can cope with short climbs and multiple explosive efforts. In summary, he’s a potential classics star. Just remember that great numbers for a neo-pro are only indicative, you need to be able to build on them to figure in the monuments, some riders manage this, plenty don’t.

But one anecdote suggests he’s not just got the cardio-vascular system but the mental side too. On a rainy day at the Cofidis camp, the riders came back from their daily ride tired and shivering from the cold. But as they rolled into the hotel car park, one rider asked the staff to wheel out a scooter so he could some motorpacing to finish the day. It was Keukeleire.