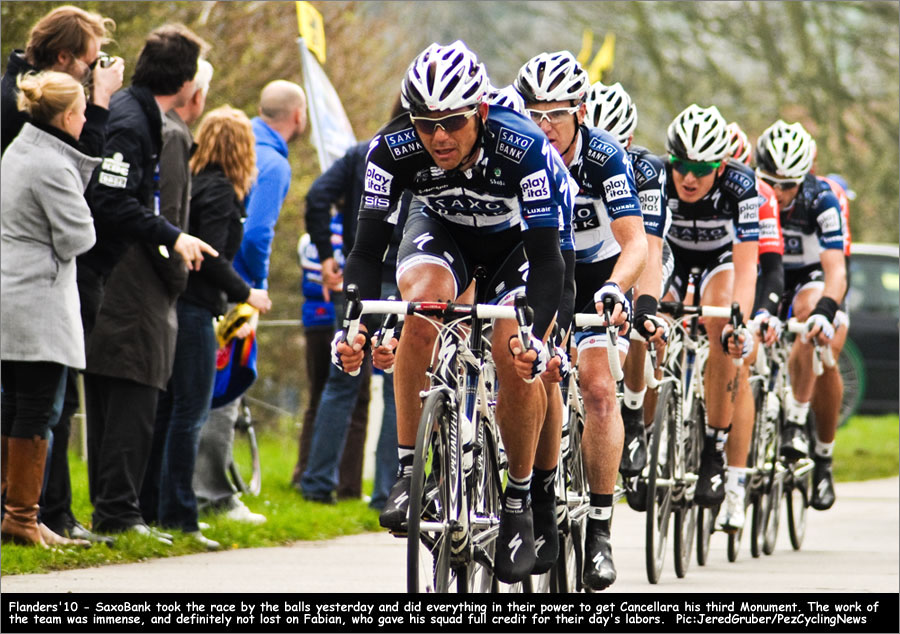 I won’t add to the superlatives the media have been employing to describe Fabian Cancellara’s win on Sunday. Attacking so only Boonen could follow, then dropping the Belgian champion on steepest section of the Kapelmuur and then soloing into the finish: you don’t get better.

Instead, just a quick word to point out the excellent team work put in place by Saxo Bank. I was watching from the moment the video coverage began and Saxo were on the front with 120km to go. I feared this was too far from the finish, that they’d waste their energy. But no, it worked. They picked up the pace on the flat sections and exploited crosswinds to make anyone caught behind so early pay a heavy price. They also rode tempo up the bergs meaning few riders could pass, nor attack. Indeed the steady pace saw riders stuck behind having to rub shoulders and slip, often losing momentum. Breschel had a bad moment blaming his mechanic, these things happen, but beyond this everything went flawlessly.

So whilst the images of Cancellara in his Swiss champion’s jersey will become part of the sport’s legend, don’t forget the help from Breschel, Cooke, Hoj, Lund, Klostergaard, Larsson, and O’Grady.