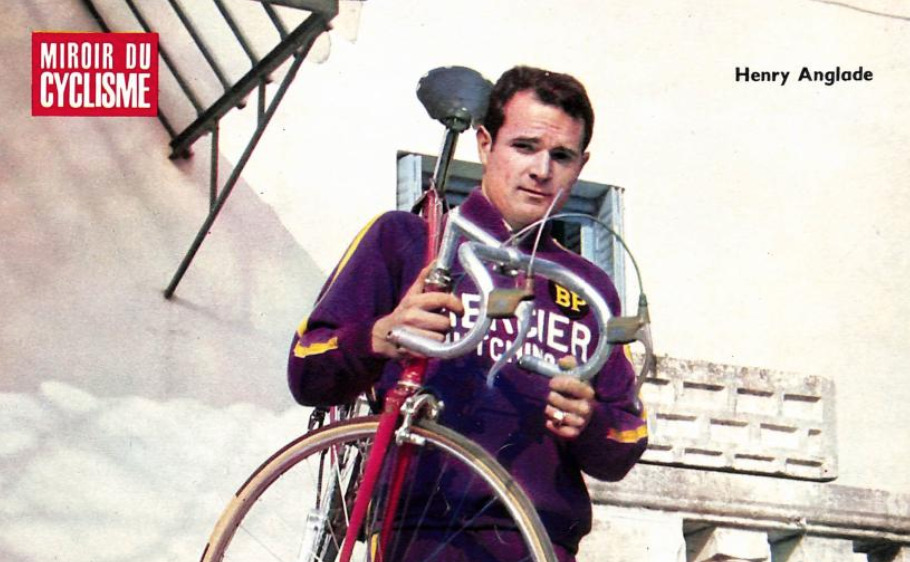 Henri Anglade has died aged 89. A champion with a quick turn of phrase, Anglade wore the yellow jersey but never won the Tour de France. Many said he should have won in 1959, except for Anglade who, often too honest for his own good, replied Federico Bahamontes was simply better. The next year Anglade had another good chance only for more rivalries to get in his way.

Born in 1933 in Thionville, a French town on the German border, the family fled for Lyon when war broke out. “In five years I must have had 11 different schools” he told Liberation, a newspaper. Anglade soon became a settled Lyonnais.

He’d spend Sunday mornings as a choirboy in church. As a teenager Mondays at school became unbearable because a classmate would go on about their weekend cycling escapades. His father suggested Henri had two choices: either ask the teacher to let him sit at different desk, or he could get their old bike out of the cellar. Anglade opted for the bike. He said it weighed “at least 26kg” and was so heavy he struggled to keep up. But one day riding through the Dombes, a flat wetland area, a fast group came past. Anglade jumped on. “They accelerated, accelerated, accelerated and I was still there” he told newspaper Sud-Ouest, adding one of the group told him he should join a cycling club. He did, and soon bought a racing Longoni, but his parents sold their bikes to raise the money.

He rose up the ranks while studying engineering and by 1957 the barrel-chested Anglade turned pro with the Liberia, aged 23. In the era when national teams rode the Tour de France, he was invited to ride for his regional South-East France team in the same year. A solid debut, he finished 28th in Paris but another debutant stole the show: Jacques Anquetil won the race by 15 minutes. Anglade was overshadowed but not ignored, he won the “Prix de l’élégance” which gave him a first class ticket into the lucrative criterium circuit, the series of exhibition races where riders could earn more than their salary in start fees. This was in the era when the Tour de France’s prime coverage moved from print to TV and radio and part of Anglade’s appeal came through these new channels. His interviews often seemed to hit the right notes, speaking with choice words and the right turn of phrase, as if he’d thought and refined the message he wanted to convey. But it was all spontaneous rather than scripted. 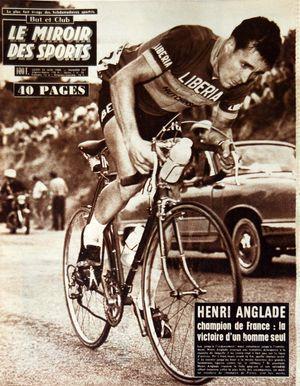 1959 should have been the golden year for Anglade. He won the Critérium du Dauphiné Libére race in June, then finished second in the Tour de Suisse to Hans Junkermann. He won the French championships on the eve of the Tour de France and he’d finish the season with the first ever Super Prestige Pernod prize as the best rider of the year. All good but the Tour de France proved frustrating. First he was not picked for the French national team, it was already top-heavy with three time Tour winner Louison Bobet, 1957 winner Anquetil, Raphaël Géminiani and rising talent Roger Rivière. Instead Anglade rode for Centre-Southern France regional team. He’d prove to be an outsider in more ways than one. The Tour started in his native Lorraine region and he had a steady start and placed well in the Stage 6 time trial and won Stage 13, a hilly day in hot conditions to Aurillac. With the Pyrenees done and going in the Alps Anglade was high on GC and had a shot at victory but Federico Bahamontes was in the lead. This is where a conspiracy to stop Anglade was concocted. 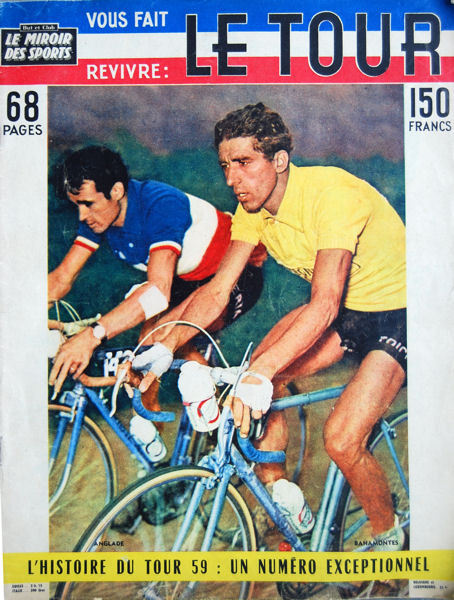 Several riders on the French national team did not want Anglade to win, preferring instead to help Bahamontes of the Spanish team: better a foreigner than a régional. Anglade was on the up and his triumph would dilute the earnings power of Anquetil and others in the criteriums, especially as Anglade’s agent was Roger Piel while the others on the French national team were all represented by rival agent Daniel Dousset. Plus Anglade could rub up the others in the wrong way, his straight talking to the media meant ruffled feathers in the peloton.

Stage 18 saw the race cross the Alps into Italy and Bahamontes was dropped at one point. Anglade tried to seize the moment and was driving the pace. Only Anquetil and Rivière didn’t contribute. This allowed Bahamontes to make it back and ultimately save his Tour. Bahamontes didn’t steal the Tour, not was he handed it on a platter either. In a straight test he’d won the Puy-de-Dôme time trial but of course the Tour is so much more and if it wasn’t for this informal alliance then Anglade may well have won. He’d finish second overall in Paris, four minutes down which was a relatively close margin for the times. L’Equipe’s lead writer Pierre Chany reprised the headline “Anglade plumé” several times, Anglade was “fleeced”. Other newspapers shared the same view. By the time the race finished in Paris the public were not happy and Anquetil was booed and whistled in the Parc des Princes.

The 1960 Tour could have offered revenge for Anglade. Circumstances made things easier, L’Equipe’s preview called it “a Tour of absentees” as Bobet had retired, Anquetil was too tired from the Giro to start and others were missing. No longer a mere régional, Anglade was selected for the French national team and co-leader with Rivière. Only this was to be his undoing. Anglade was wearing the yellow jersey on Stage 6 when Rivière attacked and only Junkermann, Gastone Nencini and Jan Adriaensens could follow. The gap grew and Anglade asked, via the team car, Rivière to stop working as the others in the break were a threat. The team manager Marcel Bidot had an impossible choice, who to back? In a wild stage, Rivière kept rolling and Anglade finished the stage almost 15 minutes down on a day that saw 200km ridden at 44km/h, a fast pace for today’s race and furious for the time. That evening Anglade was direct, “the yellow jersey was assassinated. It was a staged coup” but also said the French team had lost the Tour de France:

“Rivière is going to make mistakes. What I worry about is even worse for him. He’s going to try and follow Nencini down the mountain passes and I fear that one day he doesn’t make it“

This sounded salty at the time, so much that the journalist Jacques Augendre who quoted him didn’t print it in L’Equipe. But he kept the words which proved prophetic. While Nencini took yellow in the Pyrenees, Rivière made it through and even won a stage. A rest day and the racing resumed only for Nencini to attack down the Col du Perjuret, Rivière followed but on a bend he crashed, fell into a ravine and sustained spinal injuries that left him paraplegic. Nencini won in Paris. 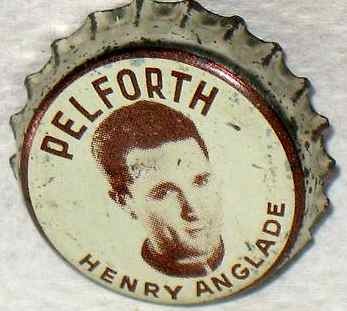 In 1963 Anglade joined the Pelforth team, backed by a brewery. Around this time Henri became Henry thanks to his wife Paulette who said it looked nicer. Unusual? Maybe but this was in an age when singers like Claude Moine and Jean-Philippe Smet opted for the anglophone stage names of Eddy Mitchell and Johnny Hallyday.

Anglade remained steady and took fourth place in the spectacular 1964 Tour de France, he was consistent more than spectacular although always with ready words for a microphone. In 1965 he won the French championships again. In the Tour de France that year he’d finish fourth again but this time played his part in altering the results. Felice Gimondi was leading the race and the Italian rouleur thought he’d struggle in the mountains. While Raymond Poulidor stormed to victory on Mont Ventoux, Gimondi was in trouble but, with help from Anglade, closed the gap. Anglade’s chase might have suited Gimondi but it didn’t seem like a fix. Indeed Poulidor didn’t hold it against him, he wrote explicitly “in no way at all do I accuse Anglade of colluding with Gimoni”, adding it was just a racing incident and of course another reason by Poulidor would never win. As proof they’d be team mates soon.

Racing in a criterium in Montélimar the next year, Anglade was putting on a show with Poulidor but grounded a pedal on a bend and crashed hard, breaking several vertebrae. Out of contract, he got an offer from Poulidor and the Mercier team manager Antonin Magne. But he struggled with injuries and abandoned the 1967 Tour de France. He then wrote a resignation letter to Magne saying he didn’t deserve to be paid any more, others would have seen out their contract to the end.

Persuaded by a cousin Anglade went into the world of portable typewriters a salesman for Olympia, but returned to pro cycling as a team manager when persuaded by Lejeune in the winter of 1975 and a year later the Lejeune-BP team signed Tour de France winner Lucien Van Impe. The management role didn’t last longer than the team. Anglade moved to a farm in the beaujolais countryside outside Lyon.

Anglade popped up at races in VIP and promotional roles, and had an amateur cyclo in his name. He’d enjoy starting the season as a guest at the Etoile de Bessèges where he’d play cards in the evening, presumably being fleeced by Poulidor. In 1999 Anglade lobbied for a monument to be put outside the building in Lyon where Stage 1 of the Tour de France had finished. It was where he grew up and he liked to return. It’s said he’d return with a sponge from time to time to keep the plaque clean. It’s still there at 33 Quai Arloing. As a choirboy, Anglade said he struggled in church sometimes because he was distracted by the stained glass windows and the way the light played. Later on he took an interest in their manufacture and even became a glassmaker. He designed and made several of the stained class windows in the Notre Dame des Cyclistes chapel in south-western France and the Tour de France will return there next summer.

To celebrate the centenary of the maillot jaune in 2019, L’Equipe interviewed former wearers of the yellow jersey and Anglade was picked as the candidate of the 1960s. The paper’s journalist recounted Anglade had to go and check if he had a yellow jersey left. He did and duly invited L’Equipe to his apartment in La Tour de Salvagny near Lyon. He labelled the interview in January 2019 “my last outing” and gave another frank assessment, his wife Paulette was in care with dementia, “I’m ill, I’m losing my mind … it’s hard, hard, hard… my final days are difficult but I’m well surrounded” paying tribute to his daughters.