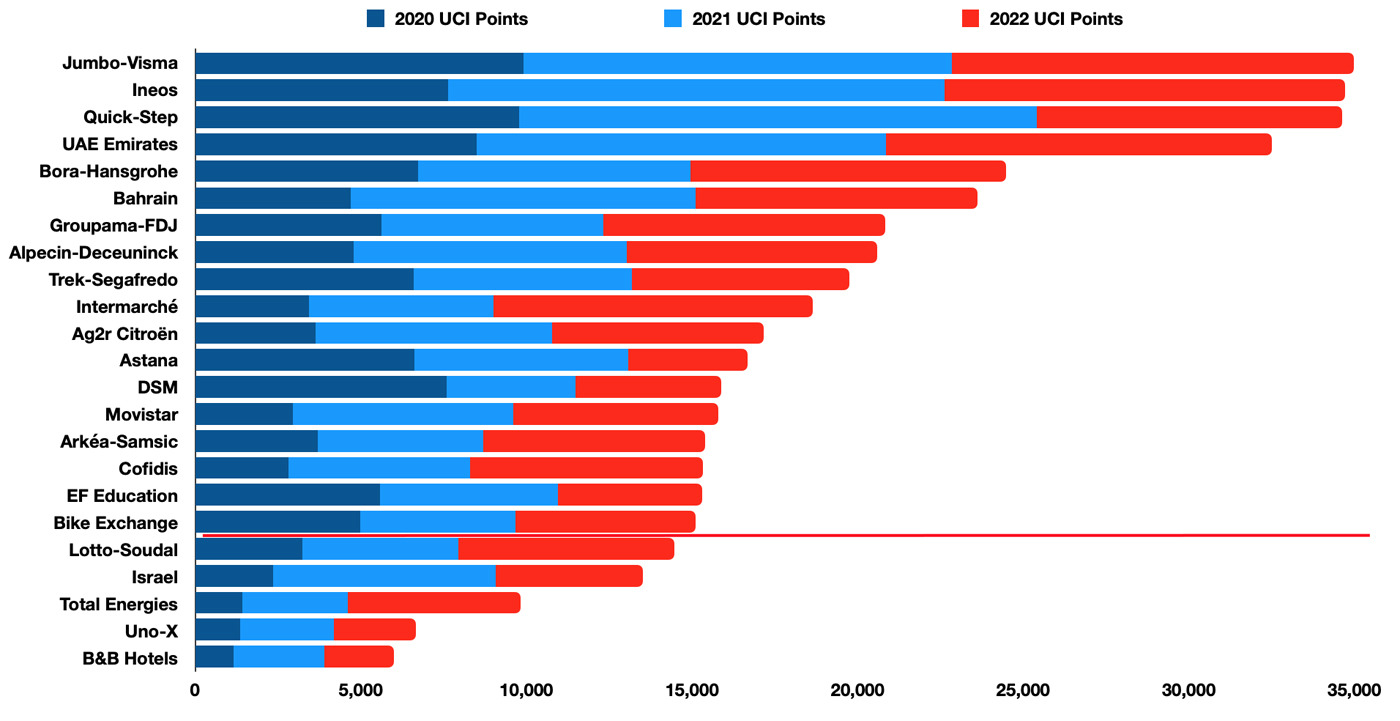 Another week, another update and with only a month of racing left, the story is the same with Lotto-Soudal and Israel-PremierTech facing relegation. Let’s take a closer look to see if their World Tour ambitions are done for.

Is Israel-PremierTech doomed to relegation?
Well there’s maths, sport and admin. We can’t talk about certain, arithmetic relegation for Israel yet because there’s still a long way to go. The Tour of Langkawi is the final race of the season and in this race alone there are 1,070 points up for grabs. Now it’s unlikely, ludicrous even to imagine Israel can take much of this. But for now it’s a matter of judgement rather than arithmetic if the team is done for.

So we’re left to make a sporting judgement. The chart above shows the gap between the Israel team relative to 18th place in the rankings, they started the season with a cushion that peaked at 855 points in February, but come March they slipped below the red line into the relegation ranks, and today they’re further from 18th place than ever, some 1597 points down. It’s this that makes things look very hard, since July the trend has seen the gap widen as they struggle to score, while rival teams above them have really focussed on the points hustle since August.

Finally there’s the admin side. Things can depends what happens with other teams during the autumnal licence reviews, plus all the talk of lawsuits and so on but the team’s fate relies on the rules being torn up, a rival team vanishing or even a successful legal/regulatory appeal. To compound the squad’s woes they’re not in line to get the parachute reward of an automatic invite to the grand tours next year because TotalEnergies beat them in the points earned this season.

And Lotto-Soudal?
The chart shows the gap between Lotto-Soudal to 18th place. At times this season they’re reached safety but only just and have not stayed there. One chronic problem is performance in grand tours, they’ve taken just 87 points across all three major races. It’s also looking very difficult for them to escape relegation now, they lost a couple of chances to score big with Arnaud De Lie last weekend, he was in the break in the Primus Classic but Movistar and EF visibly worked hard to pull that back; then he was taken out by the late crash in the Gooikse Pijl when he could have scored too. But remember he’s been a revelation this season and if it wasn’t for him and his astonishing 2,095 points haul (almost three times as much as their next rider) then it’s very likely we’d all be confidently declaring Lotto-Soudal face relegation.