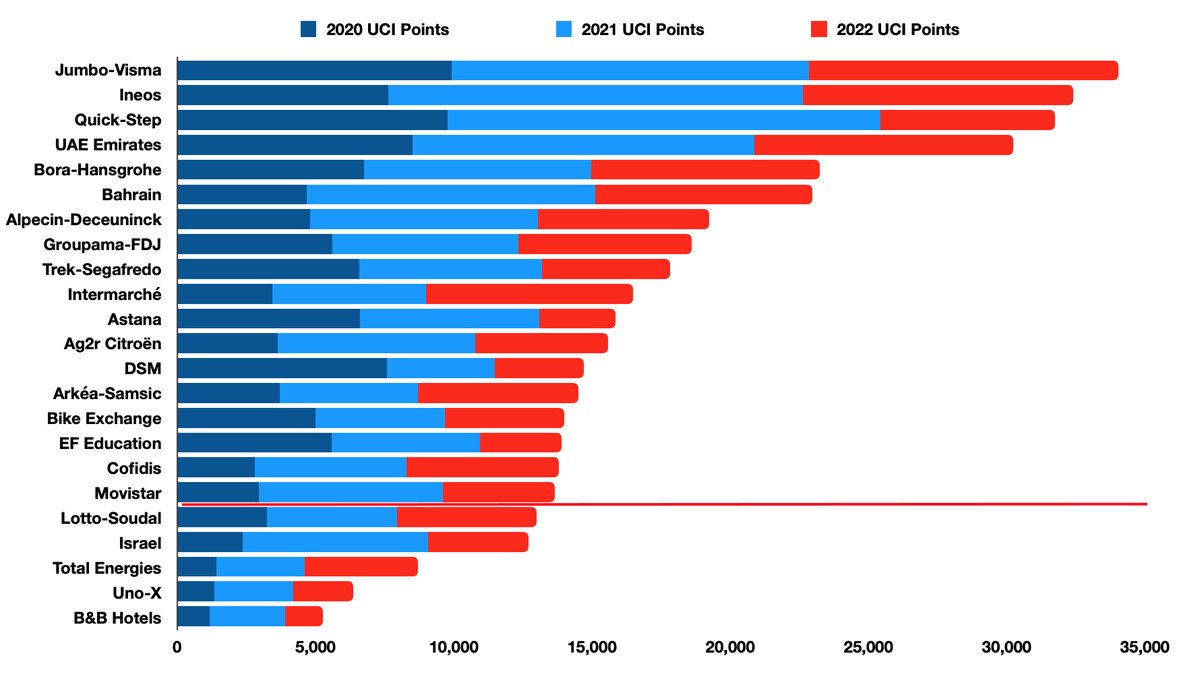 An update on the promotion and relegation standings with Lotto-Soudal closing in on that crucial 18th place while Israel are making emergency mid-season signings to help win points.

Zooming in on the relegation battle Israel had another flat week while Lotto-Soudal’s win in the Tour of Leuven thanks to Victor Campenaerts banked another 125 points, and they’re now 659 points off 18th place. They’d managed to climb to 18th in July, briefly overhaulling BikeExchange, but since then the Aussies have bounded clear since leaving the Belgian team now chasing Movistar.

Cofidis are performing à la Guillaume Martin, zagging and zigging when others zig and zag. Having began the season in 19th place and climbed up to 15th by the summer, they are now stalling and slip to 17th after being been leapfrogged by EF Education First and BikeExchange. Martin himself will be a crucial rider, he’s their top scorer but has already clocked 60 days of racing this season, they really need Bryan Coquard to start placing.

Elsewhere Intermarché-Wanty-Gobert keep winning, this time Lorenzo Rota took the Sazka Tour (Sazka is the Czech lottery, now you know) and they’re Belgian’s top team this season, at least when measured by UCI points and are over a thousand points clear of Quick-Step in this year’s haul, who’d have predicted this at the start of the year?

A couple of other points, Israel-PremierTech have signed Dylan Teuns (pushing out Guy Sagiv to make room) but to repeat a point made in another post, he doesn’t bring any points with him, his count for Israel is reset to zero. So he’ll have to score big. Just to make Israel’s top-10 he needs 124 points to surpass Omer Goldstein, and then he’ll have to keep going as there’s almost a thousand points to reach 18th place today. Beating relegation now is looking very hard but an intermediate goal can be to surpass TotalEnergies and claim the automatic invitations to the grand tours for next year because while promotion/relegation is based on a three year system of 2020-2022, these invitation are on the previous season’s performance only which makes sense as a reward for a decent team rather than inviting an outfit that was strong way back.

All this is spicing up the results from now until the end of the season. And beyond… with David Gaudu mentioning in his recent Tour de France Twitch stream that while Groupama-FDJ is well clear and safe, there’s already talk of starting the next promotion/relegation cycle of 2023-2025 on the front foot and trying to score points next year so that they’re not stressed come 2025.