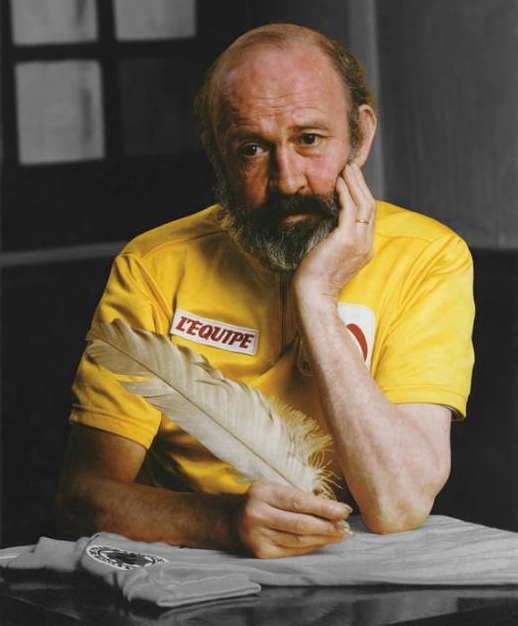 Blondin wasn’t a sports journalist. Born in the 17th arrondissement of Paris in 1922 he was the son of a poet and a proof reader and his early life stayed in literary circles, a degree from the Sorbonne university in Paris and some novels, one of which Un singe en hiver was turned into a film featuring a young Jean-Paul Belmondo. There was also a political side, he spent several years writing for reactionary right wing newspapers and monarchist causes in France but later seemed to drift to the left, supporting François Mitterand as President. As a young novelist he was of the Hussards movement, a collection of writers who seemed to be in opposition to new writers like Jean-Paul Sartre, and partly defined by their opponents.

All the politics was on hold though when it came to his column in sports newspaper L’Equipe, he’d join the paper for July although he’d dabble at the Olympics as well. You can try to find his politics in the columns but if you didn’t know you might not be able to tell. After all he was writing for L’Equipe whose agenda is still sports coverage. While some novelists have dipped their toe in a bike race or two – think Dino Buzzati – Blondin was a fixture of the Tour de France between 1954 and 1982 and so covered cycling’s supposed “golden age”. This was a time when television coverage began, consumer brands came to the sport and the general backdrop of Western Europe’s economy on the up, the “trentes glorieuses“. Cycling has long been portrayed as tough gritty sport but Blondin’s columns meant L’Equipe could be read in Parisian literary salons.

Blondin’s work can be impossible if not awkward to translate because it involves wordplay and frequent puns. When Tom Simpson took the yellow jersey in 1962, Blondin’s piece quips “Roule, Britannia” and peppers his piece with “Simpson Orient Express”, tea-drinking and the “maillot John” while rival Jacques Anquetil’s team are riding under the “Union Jacques”.

To read and reread Blondin during the Tour is to be reminded that there’s nothing new under the sun. A day when nobody attacked? One column from 1972 evokes the speaker on the start line saying “get ready ladies and gentlemen, the show is about to begin” only as the flag drops “the start of the stage sunk into a dreary lethargy” and the column yawns about riders “sleep-pedalling” and ends with the remark that several riders were called to the contrôle médicale at the finish, “without doubt… to test them for sleeping pills.”

It can be too easy to resort to Blondin, there’s a waiting quip on any race-related matter given he’d covered the Tour for over a quarter of a century. He’s the Oscar Wilde for cycling writing where sometimes it’s easier to quote him than to write something original. In a column from 2018 in the newspaper Libération journalist Pierre Carrey got fed up with Blondin, blasting it as nostalgia, “myths and naphathalene” he wrote, a “pathological attachment to the past”. 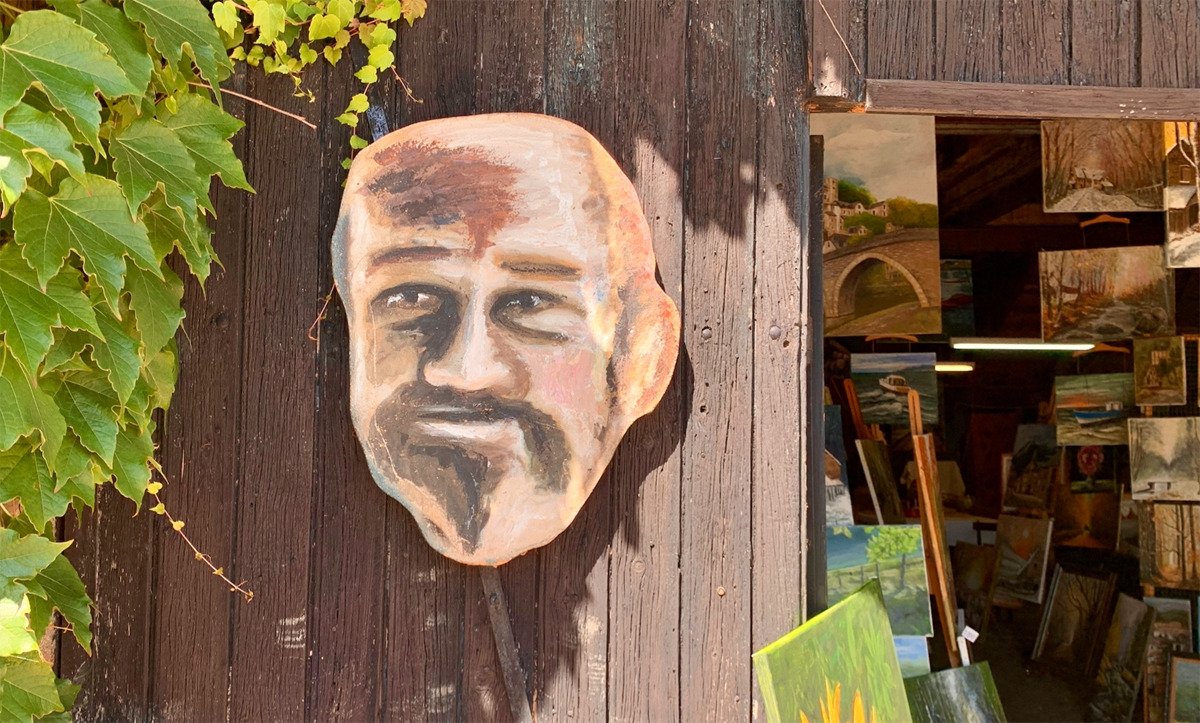 Which brings us back the golden age, it probably was a more tender time. More recently Jean-Louis Le Touzet penned a column from 1995 to 2013 for Libération (compiled in a good book) which was almost as free-ranging as Blondin but he got to cover cycling’s leaden years with the Festina scandal, Lance Armstrong and all the rest. It wasn’t as playful, it couldn’t be. Blondin too probably had a golden age, his pieces from the 1960s help illustrate the times but by the 1980s it’s as if he’s still using a fountain pen and hasn’t spotted the changes around him, whether in the peloton or society at large.

For all the praise heaped on Blondin every July, was it really down to him, or the mission he was given? Hired by L’Equipe, which also organised the Tour de France, he’d travel in the newspaper’s dedicated car which at the time had the right to drive with the peloton so he could see the race up close. Others like Pierre Chany or Jacques Augendre were tasked with writing up the procedural account of the day’s sport for L’Equipe. Blondin just had to pen a column each day that touched on the race, he could go off on a tangent, sometimes he went further. Being both close to events but allowed to stand back gave him a freedom to write what he wanted and why his accounts can still be enjoyable today, it’s never about who attacked at which kilometre, and often doesn’t mention the winner either.

At times Blondin is indulgent with the riders, he is not a journalist reporting facts. He’s often on the side of a lesser rider and telling the tale of the loser rather than putting riders like Anquetil or Merckx on a pedestal; when he does it’s to mock them gently. He teased Roger Walkowiak for taking the yellow jersey at the start of the 1956 Tour de France, describing him as a “poujadiste égaré dans le Bottin mondain” which doesn’t translate well think of a “petit-bourgeois lost among aristocrats”, an exaggerated way to point out modest rider among champions. But by the end of the race, Blondin was a supporter of Walkowiak and even said the win provided a level of moral satisfaction. Blondin became a big fan of Raymond Poulidor, France’s iconic loser to the point that he left Paris and moved to central France to live a village called Linards just up the road from Poulidor. 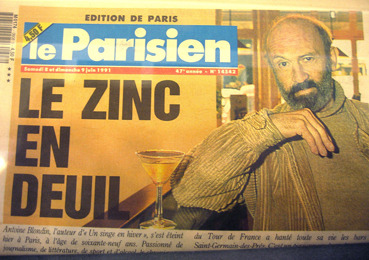 Blondin would frequently get drunk. So much he once accidentally reached for the bottle of ink he’d write with and downed it. Instead of being ill he boasted “now I’ll piss my copy”. In the 1980s he stopped writing for L’Equipe but kept on drinking; he did a TV interview in 1989 in a bar with Serge Gainsbourg, both visibly drunk, audibly slurring their words. On his death in 1991 Le Parisien’s headline was the “bar was mourning” and France-Soir ran with the headline “Même l’église était bourrée“, a wordplay that literally means “even the Church was packed” but also implies “even the church was drunk”, a fitting tribute. He’s buried in the Père Lachaise cemetery in Paris, resting place for Frédéric Chopin, Oscar Wilde, Jim Morrison and Laurent Fignon. Today Linards has a square named in his honour and there’s also a square in Paris named after him. 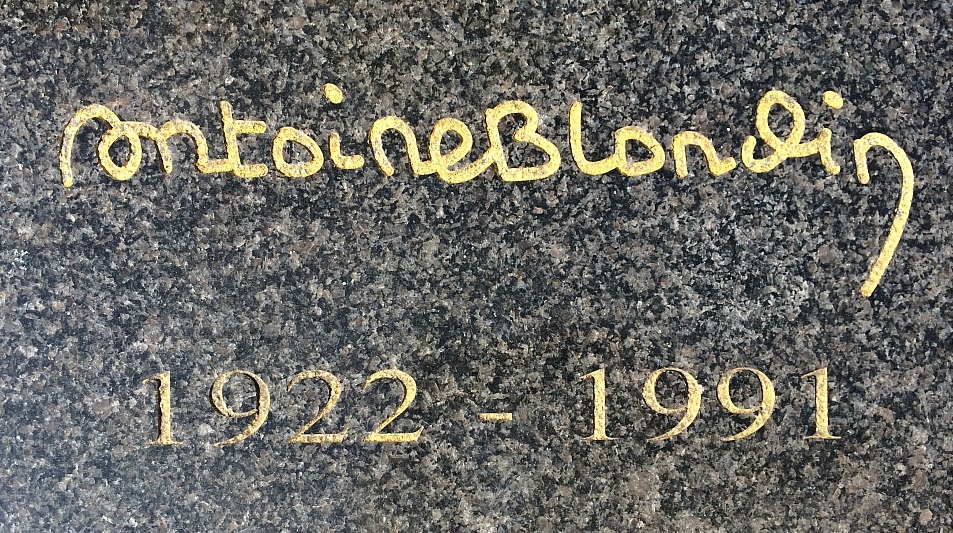 If you want further reading in French, the hefty book Tours de France publishes all his columns in 944 pages. The “Singe en Hiver” film is on the internet if you want to view it, it’s a mini-classic of its time but one for French cinephiles who’ve exhausted the likes of Godard and Clouzot.

If cycling had a golden age – you can make a good case it’s having another now – then Antoine Blondin was part of it. Anquetil, Poulidor, Merckx and others made the headlines and got the results but Blondin added colour and reading his column in L’Equipe every July must have been as much part of the experience of the Tour de France as watching Merckx win again and his free rein to write about anything that caught his eye. Whimsical at the time, nostalgic today but also interesting source material from the era.