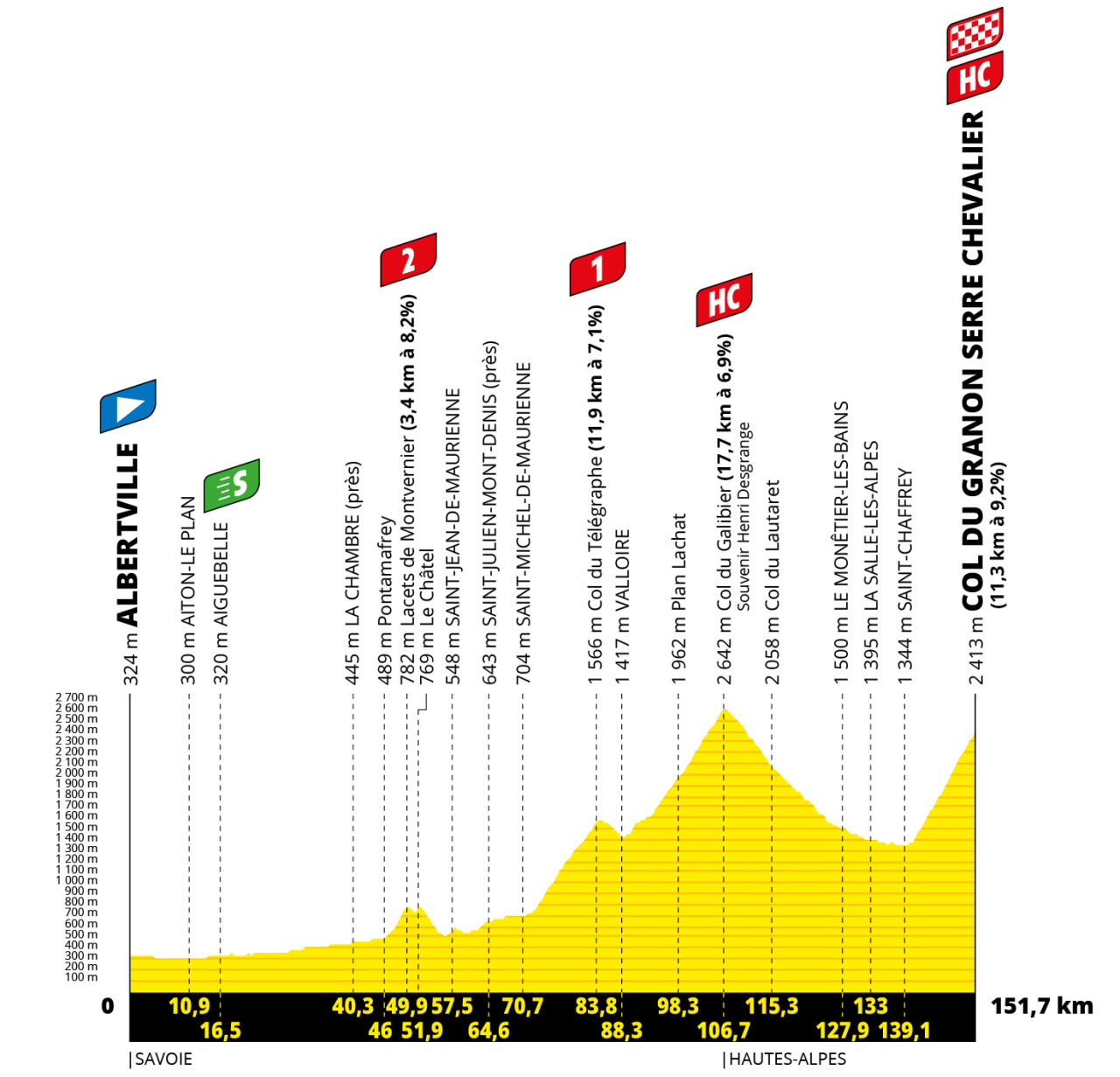 The first of two big days in the Alps, the profile above says plenty especially if you study both axes, just 151km on the x-axis, but a y-axis of evil, today has 4,000m of vertical gain, almost all of which comes in the second half of the stage. 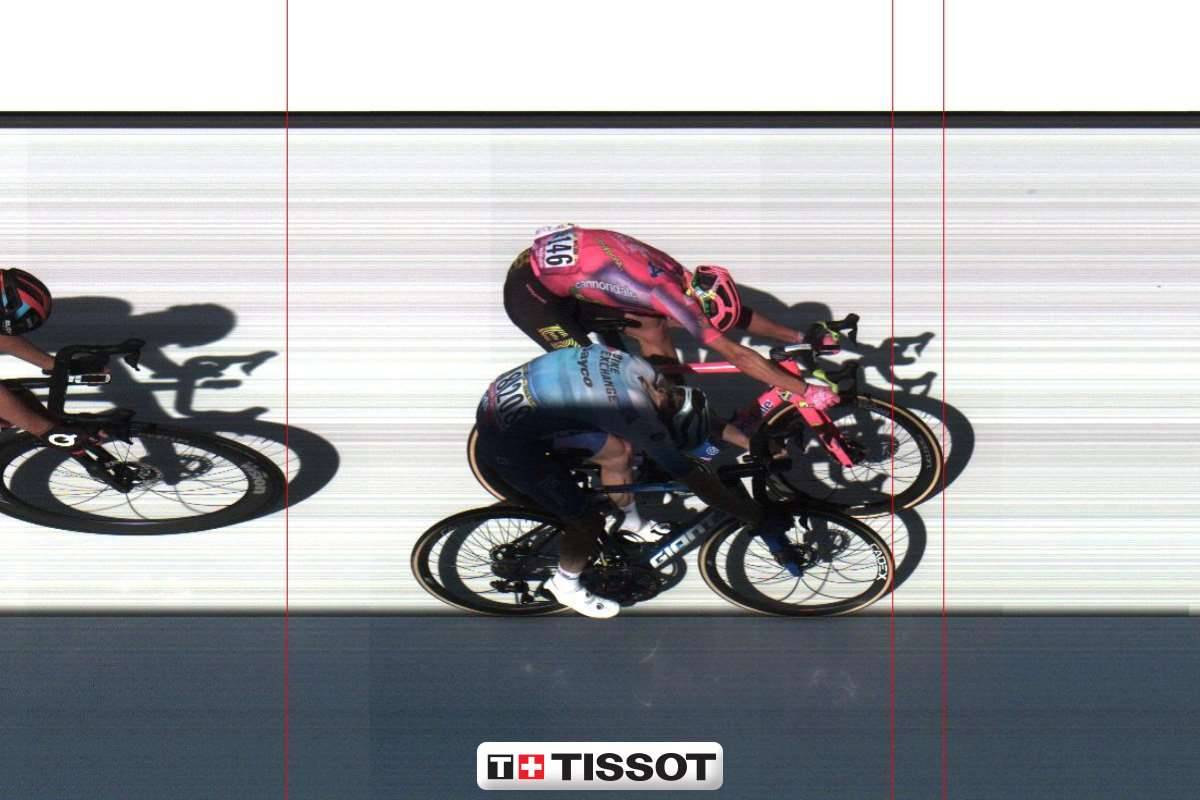 Nielsen ratings: the stage started sans George Bennett, the UAE rider having tested positive for Covid while team mate Rafał Majka has the virus but was eligible to continue thanks to a low rate. There’s no clear way to view this, it’s just as likely that after losing Vegard Stake Laengen and Bennett, Pogačar could be next, or equally he has the winner’s luck and swerves trouble. Either way it’s proof that our July distraction can’t escape the world it lives in.

Otherwise the Tour de France is meant to be a long, gradual event where it’s quite alright to have a boring stage now and then, a day when viewers can exhale, even sigh, from time to time. But so far the quiet moments are hard to find, step away from the broadcast at your peril. Stage 10 had a hilly course that rode through the mountains and not over them. It made for a frantic day’s racing where the only downtime once the breakaway had finally got clear didn’t last. A purple mist as flare-wielding climate change protestors blocked the road, a moment of a drama as the race was halted. The bubble was burst a second time, July’s ivory tour besieged for 12 minutes. That’s three short of Warholian fame but with social media, plenty to go around the world.

Alberto Bettiol was away solo up the road on a raid to the finish line but this allowed his team mate Magnus Cort to sit back in the breakaway and follow plenty of moves. The final seemed to have more attacks than a Bruce Lee flick with L-L Sanchez attacking out of Megève, being joined by Nick Schultz and Matteo Jorgenson, then Dylan van Baarle, before the temporary quartet was caught by a chase group including Cort who made his way through the group to win in a photofinish. The break included Lennard Kämna all day who came close to getting the maillot jaune but seemed to suffer, understandably, from yellow fever in the final, making a flurry of moves that didn’t work, neither the stage win nor the overall lead for just 11 seconds.

The Route: first there’s 46km up the Maurienne valley via the early intermediate sprint. Riders can try to barge clear in waves but there’s nothing selective.

The Lacets de Montvernier (“Montvernier hairpins”) is the first climb of the day. 3.2km at 8% and crucially there are 2.5km with 18 hairpin bends, that’s one every 150m or so and all on a small road, the bends are often tight and steep which matters as it’s a place to line out the peloton and launch attacks. It’s then along a small balcony road before descending down a more regular road to the valley floor and there’s 15km up the valley. 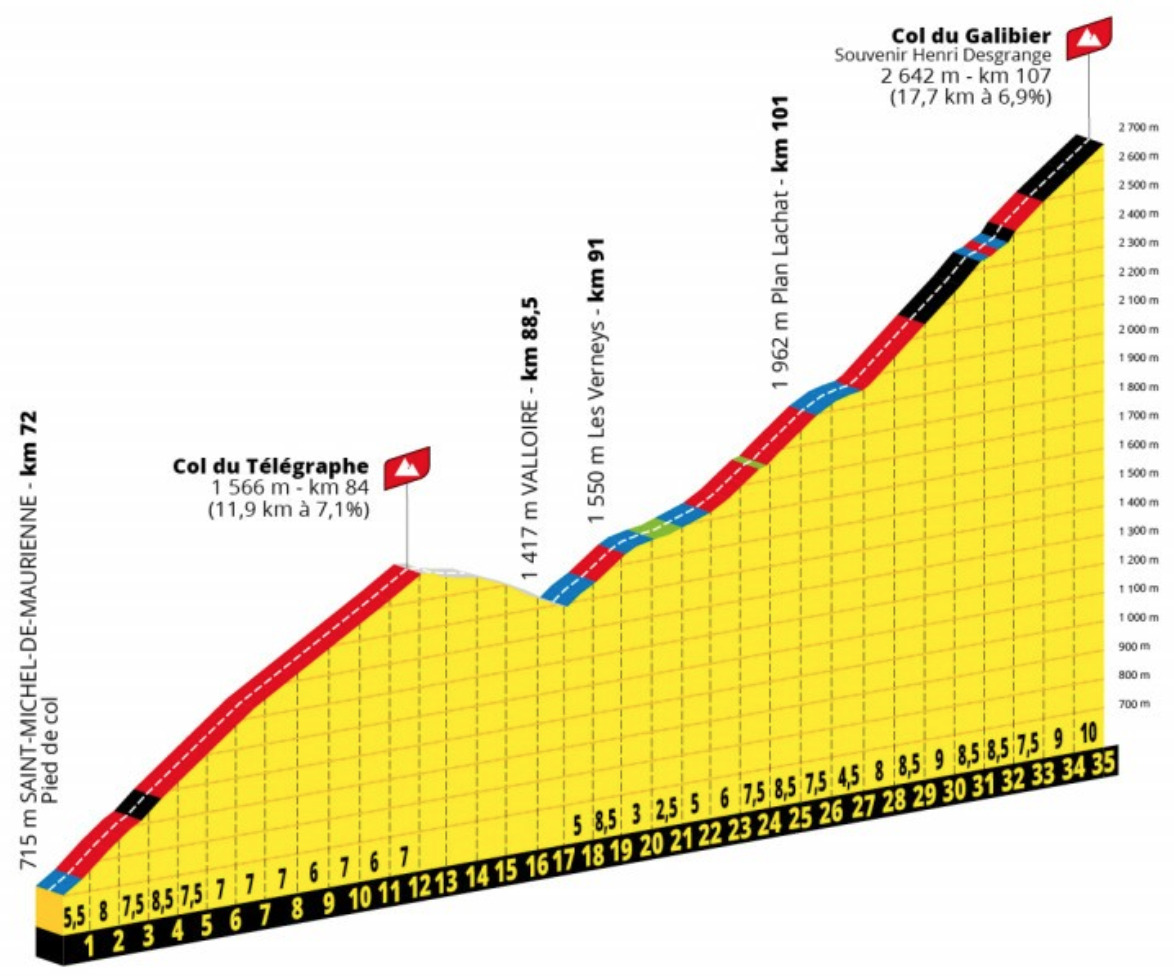 The Télégraphe-Galibier combo is a Tour classic and a giant climb. The Télégraphe starts off steep and eases to a steady 7% for the rest of the climb on a wide road. A quick descent into Valloire and then the Col du Galibier begins, a steep part out of town before easing to the Plan Lachat area. Then comes the hardest part of the climb, about 8km and all above 2,000m altitude.

The descent is in two parts, fast and a small road down the junction for the Lautaret pass. Then a big road and easier gradients. 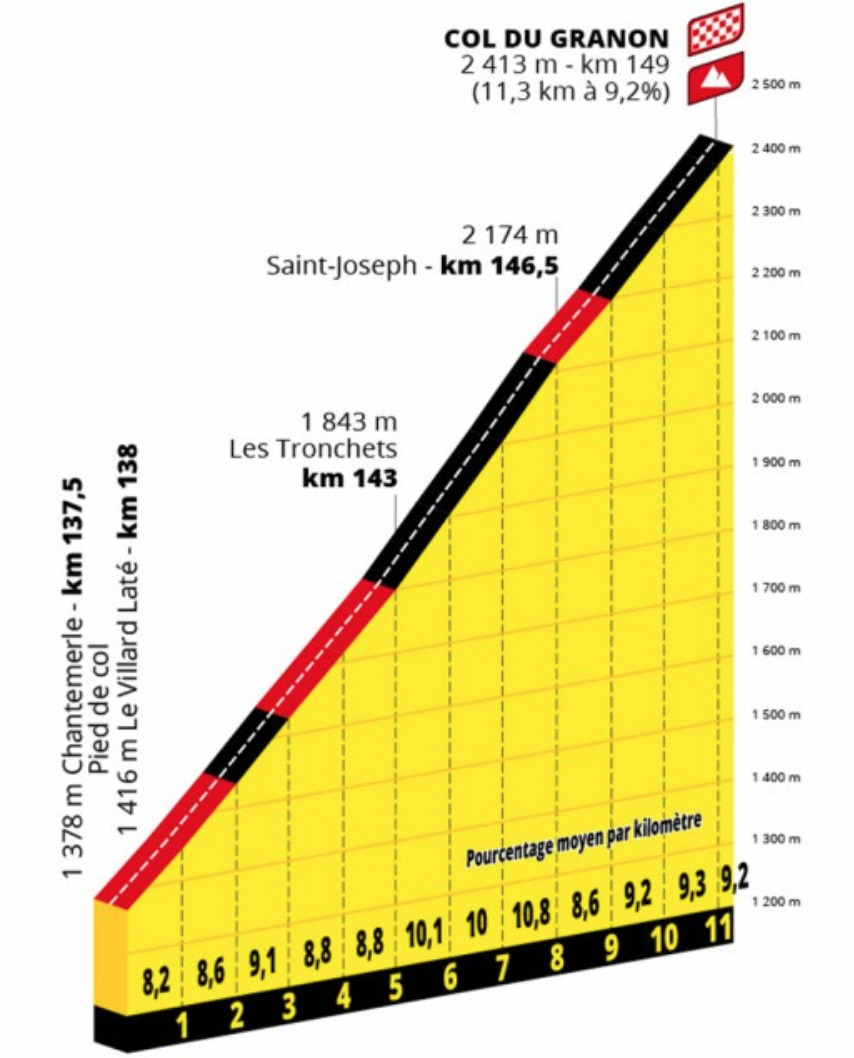 The Finish: a left turn and the Col du Granon, 11km at over 9% and a touch of mystery as the climb’s only been used once before in 1986. The slope is hard, the length tough and it starts at 1,400m. A one-way road built to serve a fort at the top, it winds up through pastures and wide open spaces without feeling too engineered yet the gradient is even most of the way up which, whisper it, takes a way a bit of the fear factor but also means there’s never a place for recovery, it’s relentless. It’s been resurfaced in places but retains rasping road surface in places hat slows everyone. The Granon is a colossus of a col that never lets up to the line at 2,400m above sea level. 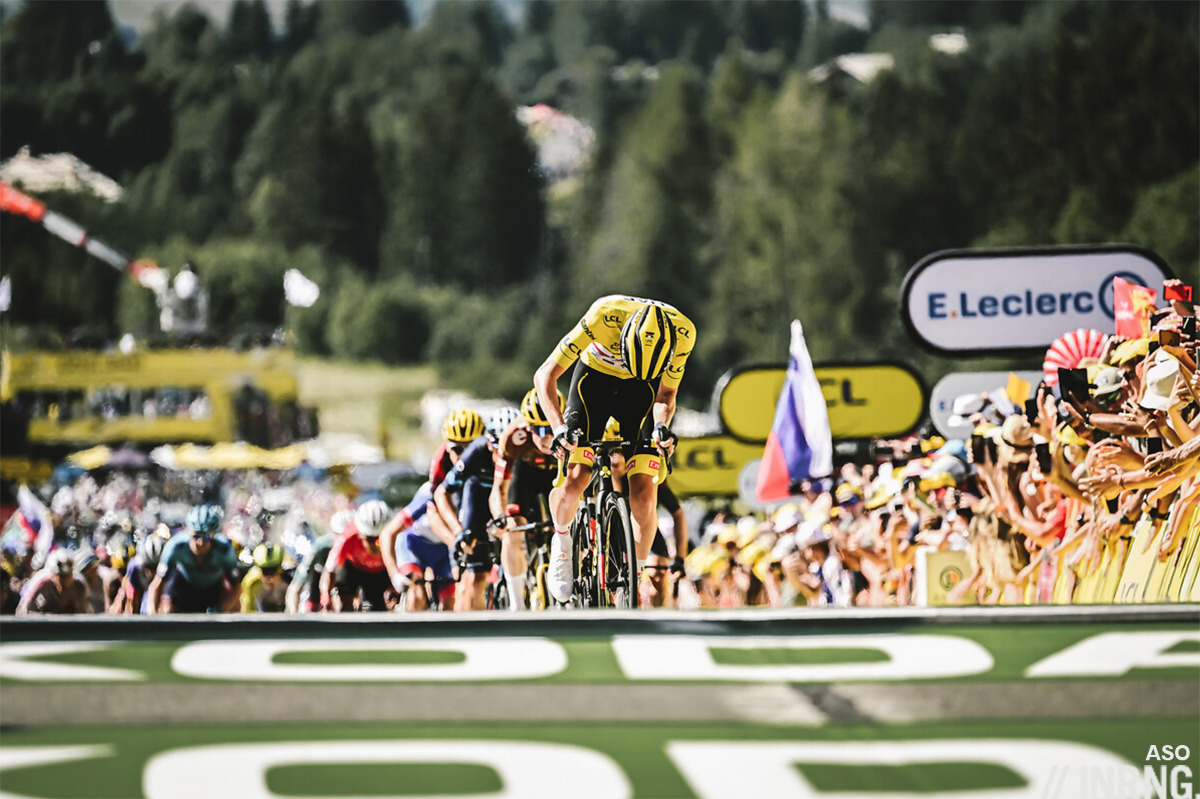 The Contenders: the big test for Tadej Pogačar (UAE). So far he’s doing everything right which is why he’s in yellow. In the last five stages he’s won two, been second in another and won the sprint from his group in the other two which are all deafening clues about form. Yet today’s a very different test, a big climb to altitude and in hot weather. Jonas Vingegaard (Jumbo-Visma) is bound to be close too and this is a big test for him and his team but they might still hold fire to measure what happens today and try more tomorrow. Likewise Ineos, Adam Yates and Geraint Thomas are high on GC but how to win today or take yellow? The worry, based on history more than scepticism, is we keep waiting for them to make a move and before we know the Tour is on Champs-Elysées bell lap.

The breakaway has a good chance because while we wait for Ineos and Jumbo-Visma to take the fight to UAE… we wait and wait which means the rider wanting to slip away will probably get mowed down another day rather than today. Climbers who are down on GC include Thibaut Pinot (Groupama-FDJ), Dylan Teuns (Bahrain), Carlos Verona (Movistar), Michael Woods and Jakob Fuglsang (Israel) and these names should in the mix for the mountains competition but both Pinot and Verona have GC leaders and could be held back to support them. Simon Geschke (Cofidis) leads the mountains competition on 19 points but first place for the Galibier brings 20 points, the Télégraphe 10 points (full points scales at inrng.com/tour).

Weather: hot in the valleys, warm at altitude and sunny.

TV: the stage starts at 12.15pm CEST finish is forecast for 4.55pm CEST. Tune in early to watch the breakaway battle. The climb to Montvernier begins at 1.35pm; the Télégraphe at 2.15pm and the final climb of the Granon around 4.20pm.

Food and drink: not far from the start in Albertville is the Beaufort area, yet another mountain cheese but one which can be proclaimed as the king of gruyères. Eat yourself silly, instead a mention for the local wine, in particular the Mondeuse grape. It’s low yielding and harder to grow but makes for a peppery taste that’s not often grown outside of the Alps. For a while the variety was also called refosco, a grape that also grows in Friuli and Slovenia almost at the other end of the Alps… but which DNA testing has shown to be different. Confusingly visit these areas and the Schioppettino grape, “gunshot” on account of the small fruit, can also have a similar black pepper note. It may seem odd if you’re reading this over a coffee but works with any dish you’d top with pepper. Cheap Mondeuse wines have an acidic taste, decent enough to cut through a hunk of Beaufort or an oily pizza. Better ones, like a Domaine des Côtes Rousses by Nicolas Ferrand, are not out of reach either at €15 a bottle. Clément Chevrier, once of Ag2r and now a wine waiter in a top restaurant in Annecy rates it to the point of having helped with the wine harvest. As yesterday’s L’Equipe related, Ferrand recently left a corner of his cellar to Axel Domont, also once of Ag2r and for many years a key domestique for Romain Bardet, to start making his own wines and by all accounts Domont’s wines are on the up. Just like today’s stage.