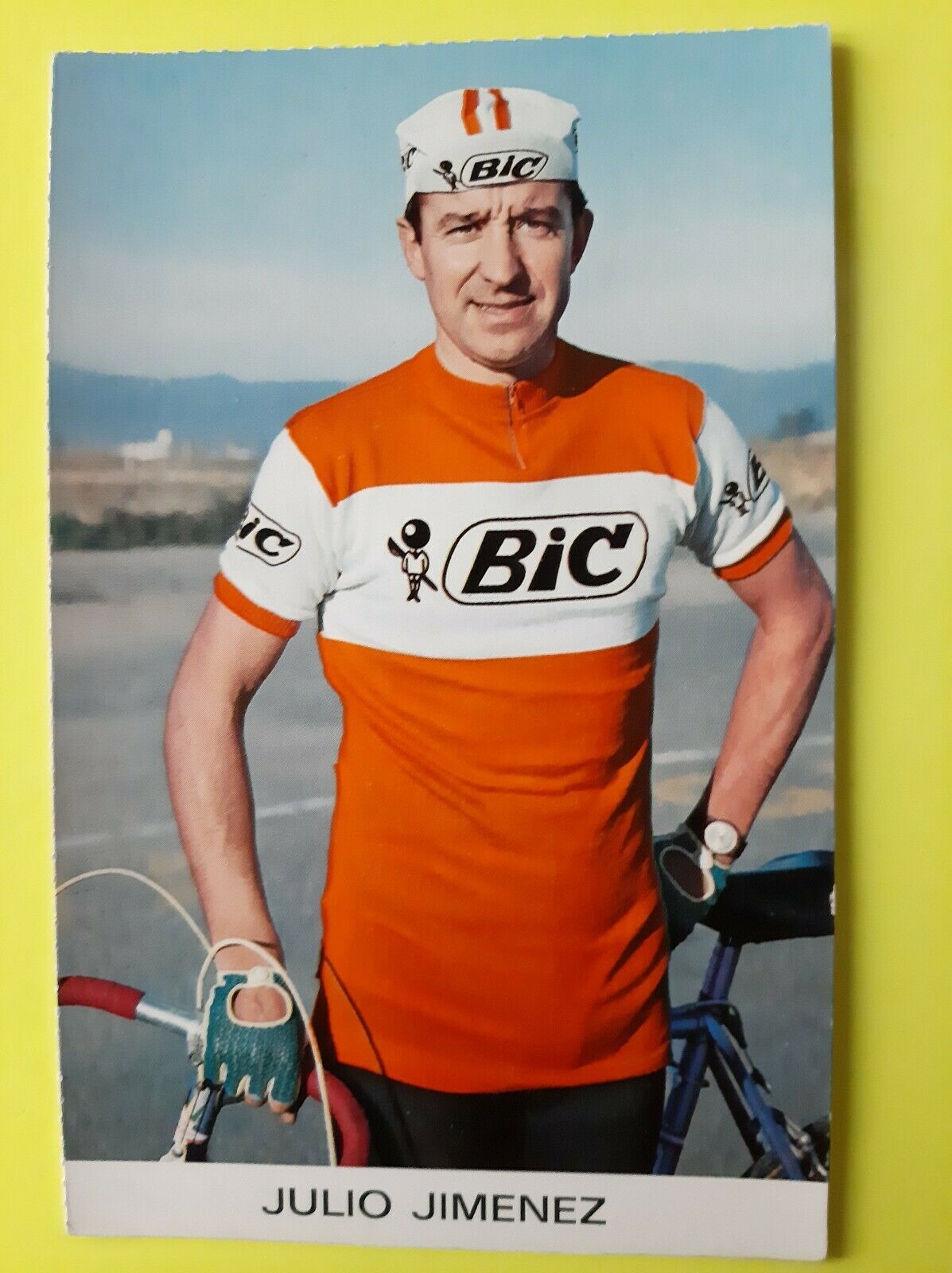 Julio Jimenez died earlier this month in his home town of Avila aged 87 in a car accident. He reached the heights of the sport, winning the Tour de France’s mountains competition three times as well as finishing second overall in the race and was one of the all time great climbers of the sport with triumphs in the Vuelta a España and Giro d’Italia too.

Born in 1934 in the Toledana suburb of Avila, his father worked as a driver for a general in the Spanish army. Julio Jimenez took up cycling early with the local club, winning many a race especially if it had plenty of climbing. He had two nicknames, the diminutive “Julito” to friends and team mates, but to the media he was “the Watchmaker of Avila”, the traditional of first job + home town = nickname. In reality he only spent a short time cycling to repairing time pieces in a cousin’s workshop, he held other jobs such as repairing sewing machines in a textiles factory. Presumably “the sewing machine repair man of Avila” didn’t have the same ring as El Relojero de Avila, and this was also more flattering than La Pulga de Avila, “the flea”, on account of his 1.65m height.

For a “watchmaker” he was late. He turned professional aged 24 and then spent three seasons on the modest domestic circuit with barely a salary, commuting to races on an MV Augusta motorbike with a bike rack that he had brazed on. After beating the likes of Federico Bahamontes in the Subida Urkiola he finally broke through and signed for the Faema team in 1962 aged 27, “I turned pro too late” was a regular complaint in interviews. It was only in 1963 he won the first of three Vuelta mountains prizes.

The 1964 Tour de France was Jimenez’s debut and by now he was 29 years old. He was locked in a duel with Federico Bahamontes for the mountains jersey which began in the Jura, lasted through the Alps, then the Pyrenees and was only settled on the ride up to Paris in the Massif Central. Their joust didn’t happen in isolation, their battle made Bahamontes a virtual yellow jersey which forced the others to chase and their attacks were wheels to follow on the climbs for the GC contenders. The contest for the mountains jersey lasted right until the penultimate stage to Orléans when Bahamontes sent a teammate up the road early to take the mountains points on a climb and make it arithmetically impossible for Jimenez to win and so Bahamontes won his sixth and final mountains competition.

The previous day though had been a triumph for Jimenez, only one almost forgotten. It was the defining stage of the race, thanks to the battle between Anquetil and Poulidor on the Puy-de-Dôme that gave rise to the iconic photo. The legend was something formed over time, as at the time the race was mourning the death of nine spectators after a caravan vehicle crashed into them the previous day. Going into the stage Poulidor is just 56 seconds down on Anquetil on GC and suited to the punchy summit finish with the final 4.5km at 11% and there is a one minute time bonus the finish. As they reach the double-digit gradients with 5km to go it’s down to four riders: Bahamontes and Jimenez as the best climbers in the race, still after mountains jersey, plus Anquetil and Poulidor as first and second overall. But the story was Anquetil vs Poulidor, the two riding side by side at times while Jimenez had attacked and Bahamontes had gone with him leaving the two Frenchmen behind. Jimenez’s stage win is almost a footnote, a quiz question.

Yet it seems Jimenez, and Federico Bahamontes, were not desperate to win. They each approached Poulidor and his team manager Antonin Magne before the Puy-de-Dôme showdown according to ex-pro Hubert Fraisseix (translation):

“The evening before Bahamontes and Jimenez asked for 5,000 francs each to let “Poupou” [Poulidor] win. Magne never wanted to pay. In the end they finished ahead of Raymond who, with the one minute time bonus for the stage winner, would have won the Tour de France”

It’s a reminder that riders earned little by salary, instead making the big bucks from appearance fees at criterium races. With Bahamontes six years older and about to retire, Jimenez took over as the top climber in 1965, winning the mountains competition in the Vuelta that year and then the Tour, and with stage wins along the way. It was the first of three consecutive mountains prizes in the Tour. In the 1966 Giro he had an eleven day spell in the maglia rosa, too long for him as he was advised to try and lose the jersey to be better able to retake it later but decided against this, only to become too tired from defending the jersey, both from rivals but also the tifosi who would push their home rivals and more.

In 1967 he joined the French team Bic and even moved briefly to the city of Clermont-Ferrand to be under the supervision of legendary team manager Raphaël Géminiani, who kept Jimenez in lodgings next to the night club he ran. But that year he couldn’t wear the Bic jersey in the Tour de France. Jimenez was convinced he could have won this edition, blaming the experimental format of national teams and telling Velonews:

“I should have won that Tour… …That year, the Tour was raced with national teams. The French ganged up on me so I wouldn’t win, but I was the strongest in the race that year.”

His account to El Pais explains more. He felt he could have won had he ridden for Bic instead of Spain. It wasn’t just being done over by a stronger French team, he bemoaned his Spanish team as “un caos de egoístas” which doesn’t need translation for the way they first let eventual winner Roger Pingeon take time, and then later on when he needed help, they rode for themselves rather than pulled for him. He added “I didn’t get along badly with anyone, but no one lent me a hand“. He’d still finish second overall and take the mountains jersey.

In 1968 he went to the Giro d’Italia where he took two stage wins but not the mountains competition as Eddy Merckx devoured the race, taking the overall, the points competition, mountains and the team prize. Then he signed with the small Eliolona team for 1969 but was halfway to retirement by then and didn’t do a grand tour.

In retirement Velonews mentions he owned a bar and a hotel. El Pais writes he never married, adding he was a “womaniser” and his elderly mother “would never have approved of the women he liked to spend his nights with”. L’Equipe’s obituary was less oblique, but still deployed euphemisms where he was described as a chaud lapin, literally a “hot rabbit”, adding he preferred “nocturnal escapades in the ‘houses of joy’ in Villacastin, near Avila, of which he’d become the owner”. There’s no other way of putting it: he appears to have owned a brothel in retirement.

Perhaps eclipsed by Federico Bahamontes before him and Luis Ocaña after him, Jimenez was a central figure in Spanish cycling for a long period and and well after he retired too. “Julito” was an avuncular figure of cycling in Avila, no Vuelta visit to the castle city was complete without him. The 1983 Vuelta is a highly-rated edition with Bernard Hinault taking on several Spaniards and the Frenchman approached Jimenez for advice on the local roads, he advised that he attack on Puerto de Serranillos. Hinault listened and won the race thanks to this move. Jimenez was helpful to locals of course and oversaw the triumphs of locals like Angel Arroyo, Jose Maria “Chava” Jimenez and Carlos Sastre. There’s a street named after him in Avila, fittingly it’s a steep cobbled ramp with a nightclub on the side.