A sprint interlude, although if you can’t climb or time trial this is your last shot at a stage win so there should be a bigger battle for the breakaway and in turn this reduces the chance of a sprint. 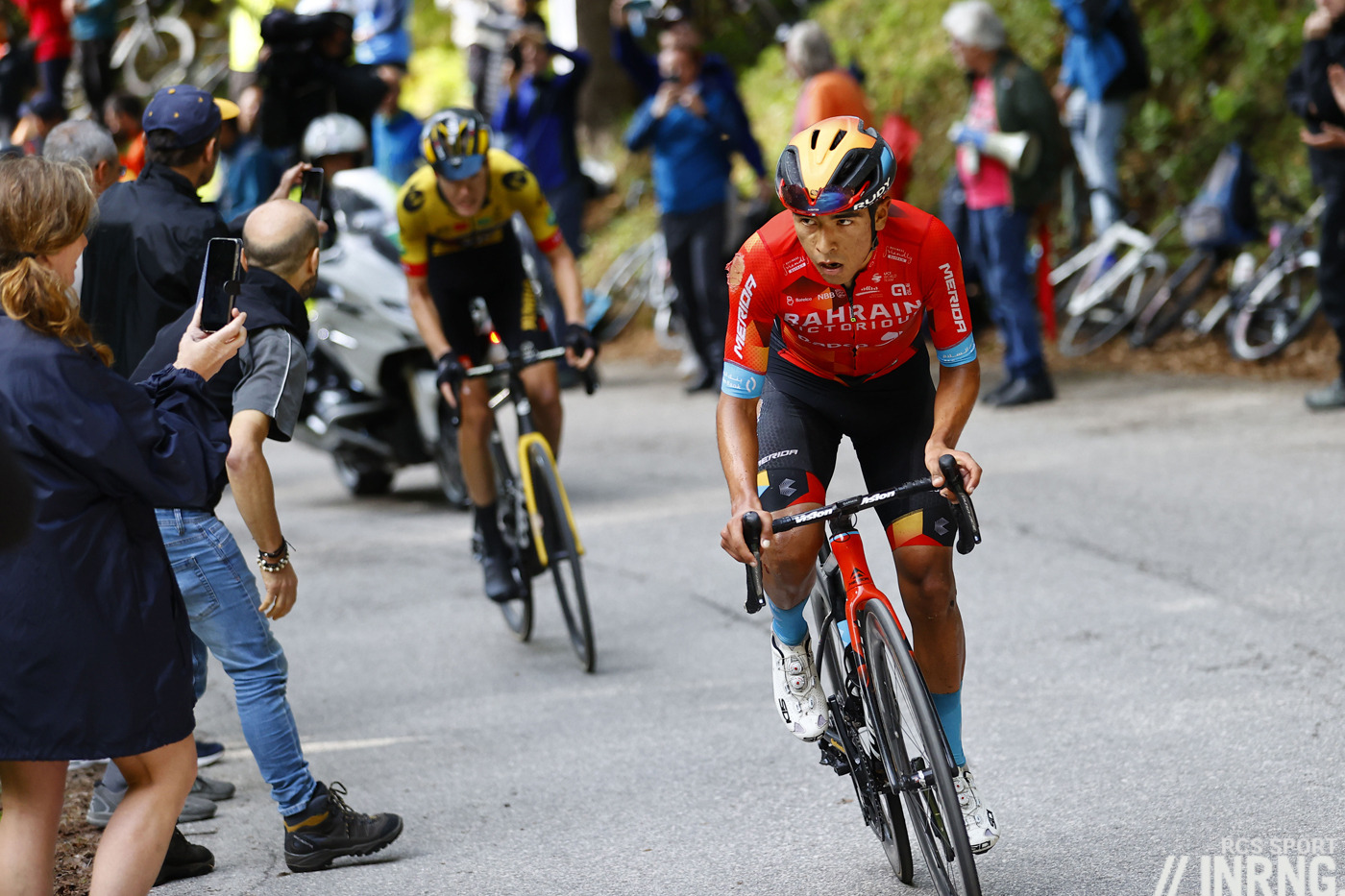 Stage 17 Review: a maxi-breakaway with all the likely breakaway names for a mountain stage, plus Mathieu van der Poel. He was there and keen to stir things up, surely he had no chance of winning but you sensed he just preferred to be on the move rather than sat tight in a group. Koen Bouwman and Giulio Ciccone kept up their battle for the mountains competition. Guillaume Martin was there after a public apology to his team mates for not delivering what he’d promised them.

Van der Poel got away with Gijs Leemreize on the descent of the Passo Vetriolo and built up a lead of a minute on the valley roads to the final climb. As soon as they hit the final climb Van der Poel started to ride away and for a brief moment the possibility of him winning a mountain stage could be entertained. But he was forcing the pace, shoulders rocking and soon looked like steam was going to hiss out of his ears. Sure enough Leemreize caught him, passed him and rode away. However Santiago Buitrago surged out of the chase group, he’d been well over a minute down and caught Leemreize before the top, attacked him and cracked him. He was clear to win the stage, sitting up with his shredded kit after a crash at the end of the Giovo descent.

Among the GC contenders there was a battle of sorts, we got the trio of Carapaz-Hindley-Landa again and Landa tried several attacks but couldn’t get clear and the other two sat tight, they’re still marking each other. As much as we might hope they trade attacks and swap the maglia rosa every day it’s not happening and they’re probably going to leave it until the last climb on Saturday. Hindley said he was very tired but he still looked the smoothest up the climb. 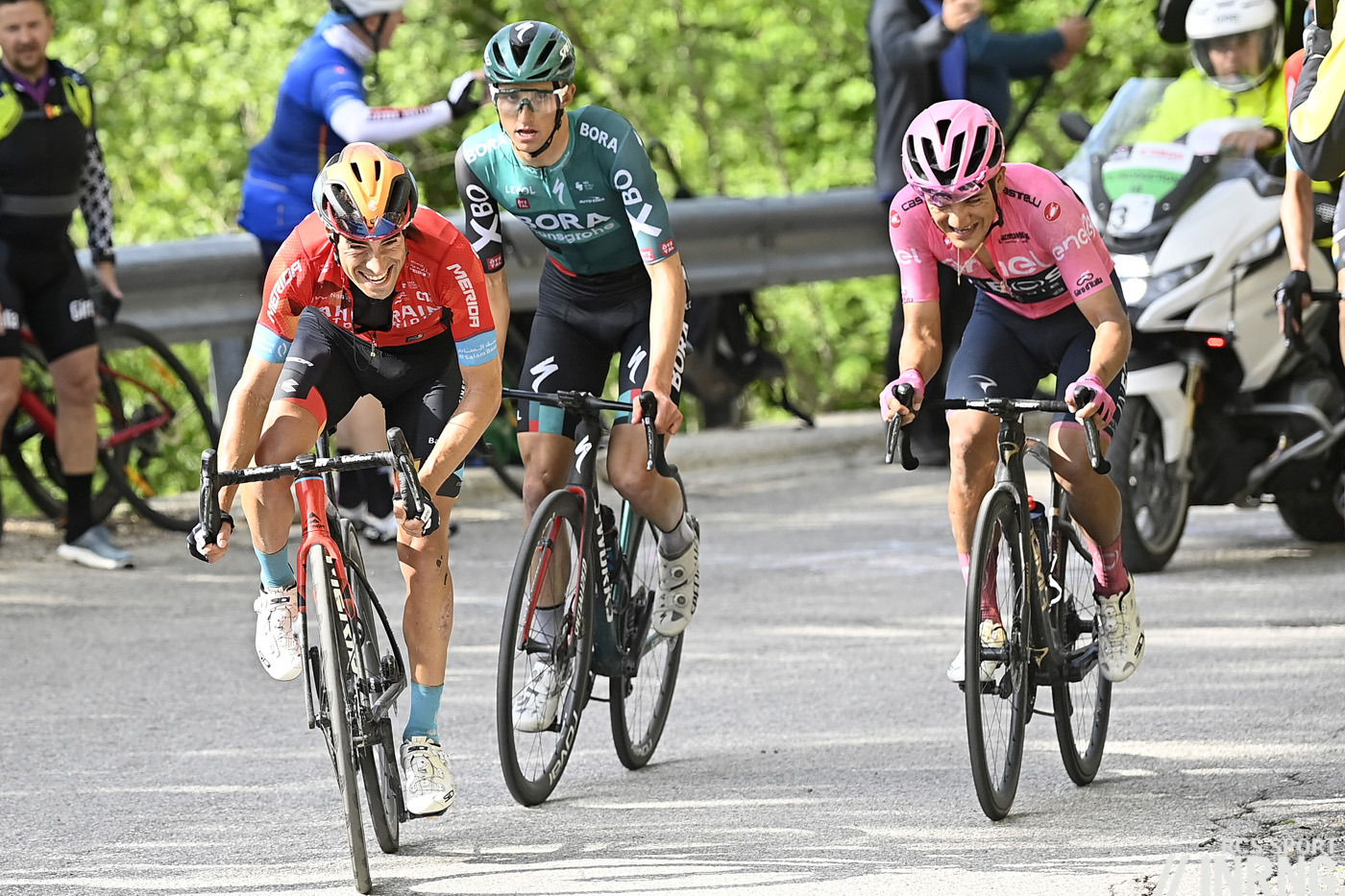 The Route: 151km out of the mountains on valley roads, many of them familiar to the Giro and Italian cycling. The climb at Primolano is small compared to all the Alpine ascents of this week, and unusual too as it’s partially through a fortress. Then it’s across to Valdobbiadene, home of may prosecco wineries and the region produces half a billion bottles a year, much of it is exported to the USA and UK.

Then it’s over to the Ca’ del Poggio. Poggio is a term for a hill, a word that’s been exported thanks to the Milan-Sanremo race. Here it’s very different, a “wall” climb that’s featured in the Giro and Italian championships before but hardly ambush terrain. Then it’s to Treviso for one lap of a 10.7km circuit.

The Finish: it’s all flat but some smaller roads on the edge of town between the 4km-2km points. The finishing straight is over a kilometre long, a big boulevard alongside the city’s old walls. 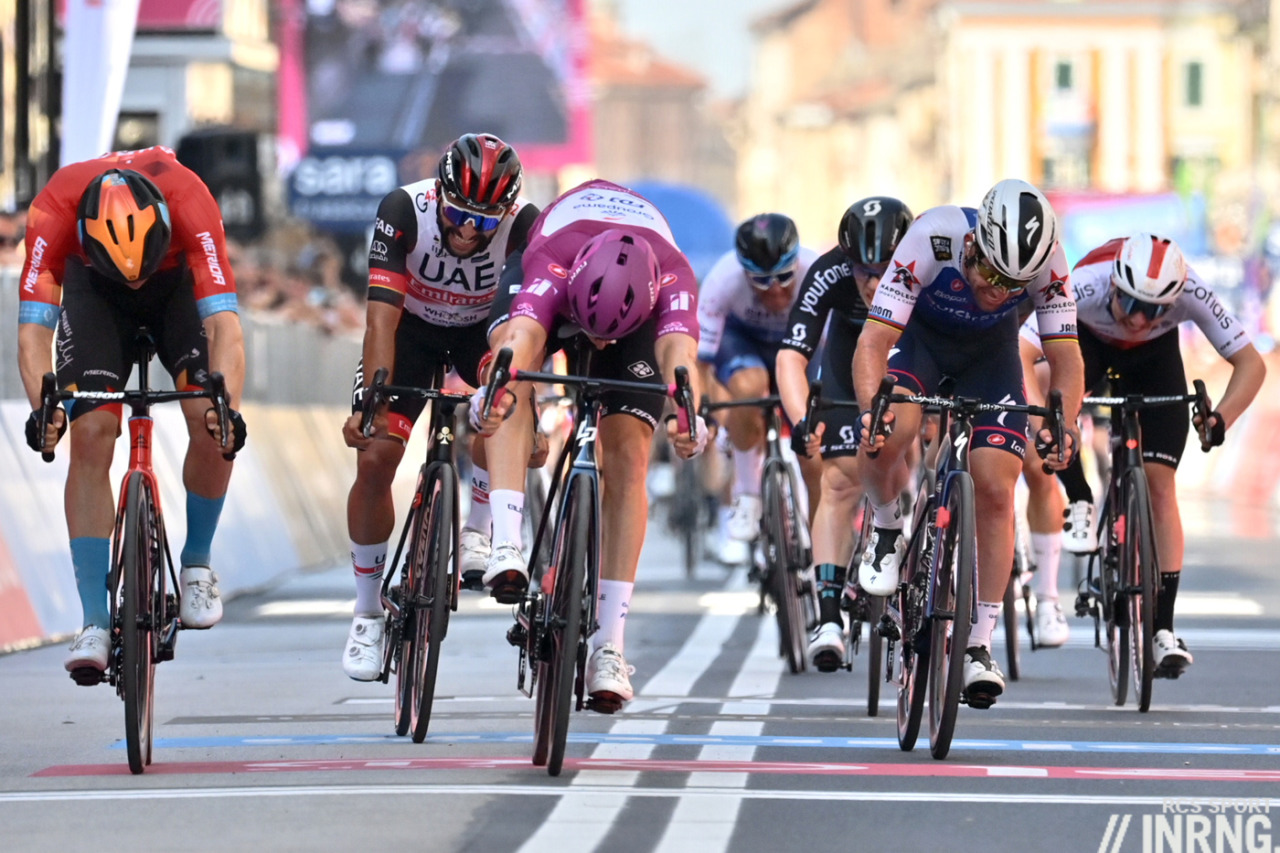 The Contenders: normally you’d look at the course and say there’s a 99% chance of a sprint finish today, but today let’s say it’s 80% as this is the last chance for any non-sprinters and non-climbers to take a stage win and there could be more of a fight. In recent years the sprint interlude in the final week has eluded the sprinters: in 2020 the truncated Asti stage went to the breakaway with Josef Cerny, in 2019 the one to Santa Maria di Sala was won by Damiano Cima from the early breakaway. There’s likely to be more riders up for the breakaway and among them more rouleurs who can help it power away. The saying goes that the peloton decides but it’ll really come down to Groupama-FDJ and Quick-Step and how soon they take up the chase, and whether UAE and DSM and maybe Cofidis can join in for their sprinters, or whether any of these teams have sent a rider up the road and so can sit out the case.

Breakaway picks include Julius van der Berg (EF Education), Pascal Eenkhoorn (Jumbo-Visma) and Thomas De Gendt (Lotto-Soudal) and…. Mathieu van der Poel (Alpecin-Fenix) who could contest the bunch sprint if he doesn’t go in the breakaway. You might think of Alessandro De Marchi (Israel) but he can climb ok so tomorrow suits more, above it goes through his home town.

Otherwise Arnaud Démare (Groupama-FDJ) is back to winning ways and has his big team. Mark Cavendish (Quick-Step) has stayed in the race to hunt for a second stage win. Fernando Gaviria (UAE) must feel it’s got to be his turn soon. With tired riders there’s still a chance of a surprise for Phil Bauhaus (Bahrain), likewise a second stage win for Alberto Dainese and this is almost on home roads, he’s from Padua about 50km away.

Weather: warming up again, 28°C and a slight headwind for the final two hours of most of the course.

Going global: today the race goes to Treviso, the home of Pinarello. Giovanni Pinarello trained as an apprentice frame builder before a brief professional career and then started Cicli Pinarello in 1953. For the next 50 years the company grew but remained an artisan effort, hand built steel fames made in Treviso. Now things are very different, Pinarello is a luxury brand, its carbon frames are made by a third party in Taiwan and the Pinarello family sold the business to US private equity firm L Catterton which owns other brands like Birkenstock sandals and 2XU compression wear. Sales are booming, Pinarello’s revenue surged 25% in 2021.