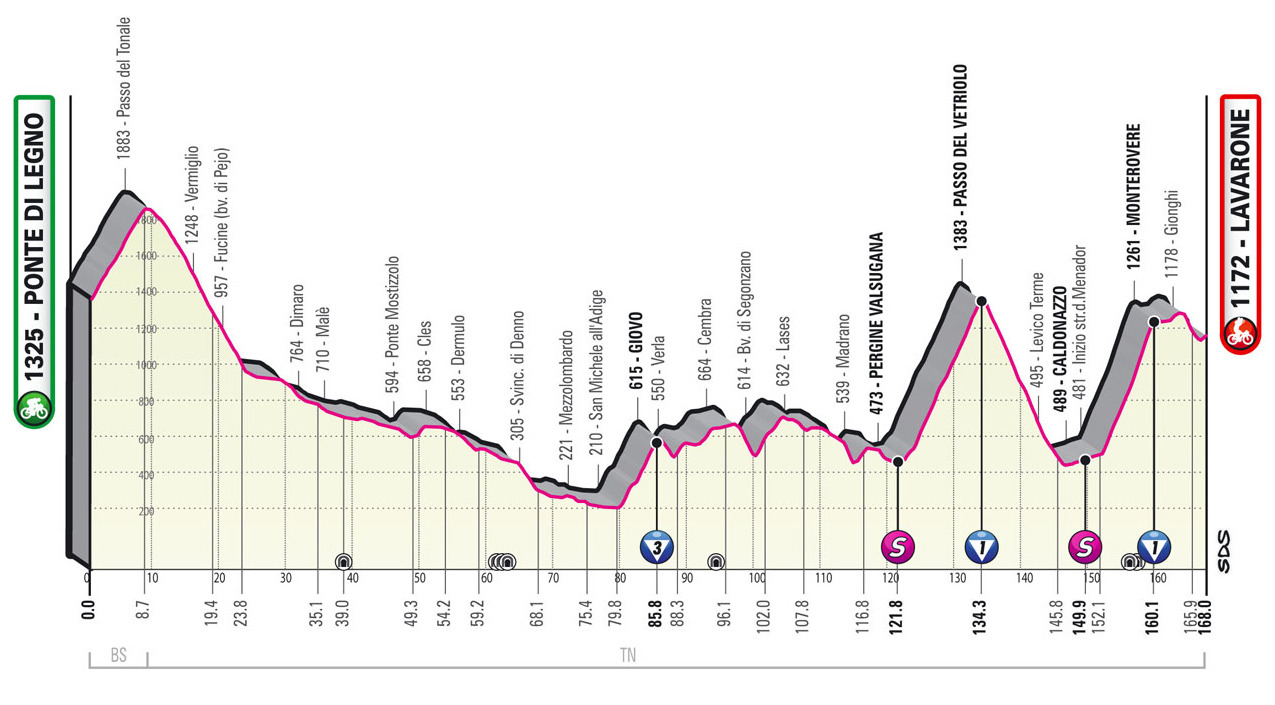 Another day in the Alps and there’s just three seconds between Richard Carapaz and Jai Hindley.

Czech mate, Stalemate: well everyone else is using Hirt=Hurt headlines so let’s go with something different. This was a big day that settled nothing, a Czech won but the GC is tighter than ever.

The stage had a cyclocross moment with a standing start because the race had paused outside the premises of a sponsor for the start. Mathieu van der Poel was of course fast out of the traps and had Mark Cavendish for company in a six rider break. But this was a day for diesels, not turbos.

A big move got clear but as ever, these moves can be packed with stars but if there are more than a dozen riders they begin to flounder because freeloaders can hitch a lift. DSM duly split the group with a move on the valley section to the Mortirolo and this caught out many. Their rider Chris Hamilton likes his Utes and he was riding like one with team mate Arensman loaded in back but they had strong riders like Lennard Kämna, Hugh Carthy, Alejandro Valverde and Jan Hirt along for the ride too.

Behind Astana got to work on the Mortirolo. Were they planning a long range attack from Nibali, really? Sort of, it did thin the group and when Nibali surged over the top of the climb it forced others to move. Alas Domenico Pozzovivo crashed, complaining his hydraulic brakes had stopped working, a problem you really don’t want to have down the Mortirolo. Sure enough Nibali’s attack didn’t turn the race upside down but it would help him climb on GC, he’s now up to fifth, with Pozzovivo at sixth.

Hirt attacked the final climb right from the start like he wanted the Strava segment. He dropped Carthy and set off in search of Arensman and Kämna. At first Kämna looked good for the stage win, only for Arensman to catch him. Then the tall Dutchman seemed likely to win the day. But Hirt keep on going and caught him. To say he attacked would be to use too strong a word, he made a small acceleration. Only there was a gap, it grew, and Arensman could only see the win riding away and then watch as his rival sat up to celebrate. What a difference a year makes, Intermarché had a fluke stage win with Taco van der Hoorn in 2021, now they’ve won big with Girmay and Hirt, trumping rival Belgian outfits like Alpecin-Fenix, Quick-Step and Lotto-Soudal who’ve all had their triumphs but this team’s now had more. 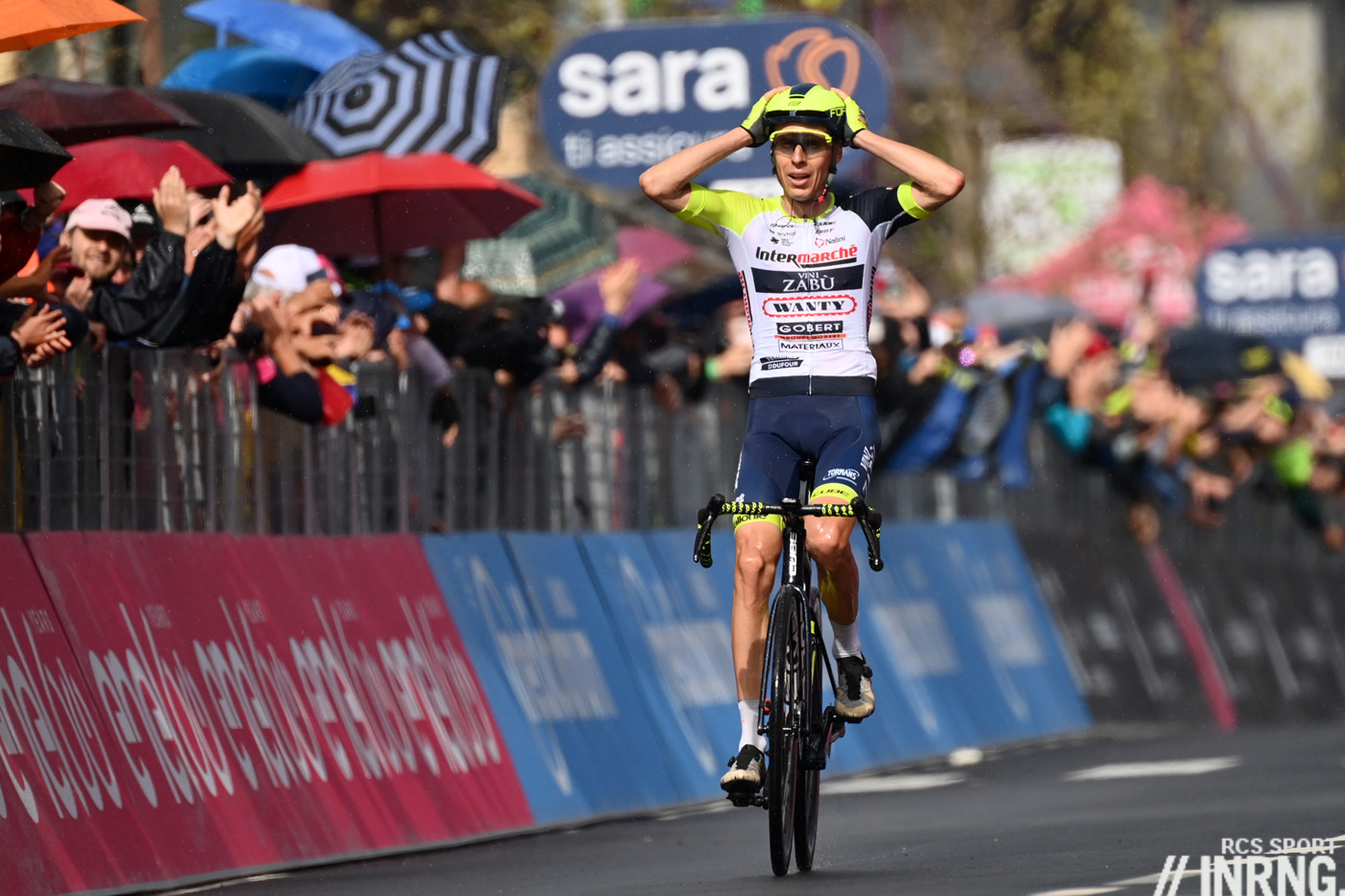 Behind Bahrain had a collective uphill crash on the final climb but soon remedied with this with hard pulls that blew the group to pieces. Suddenly it was Landa, Hindley and Carapaz. The trio didn’t really attack each other, if one of them pulled hard it was probably more to keep Almeida at bay.

The socially distant Almeida was again hanging within ten seconds of the trio on the climb but alone on the descent and the valley road to Aprica he lost a little more time but it’s a remarkable way of racing, uphill or downhill he can hold others in range even if he can’t hold their wheel. It must cost him more power, but he knows what he is doing.

Hindley and Carapaz sprinted for third place a photofinish was almost needed to award Hindley the last time bonus, the four seconds brings him to within three seconds of the maglia rosa. But it’s as much a stalemate as the pair are inseparable on the route, it’s only the artifice of time bonuses that’s altering the time gaps since the six second difference from the Budapest TT. 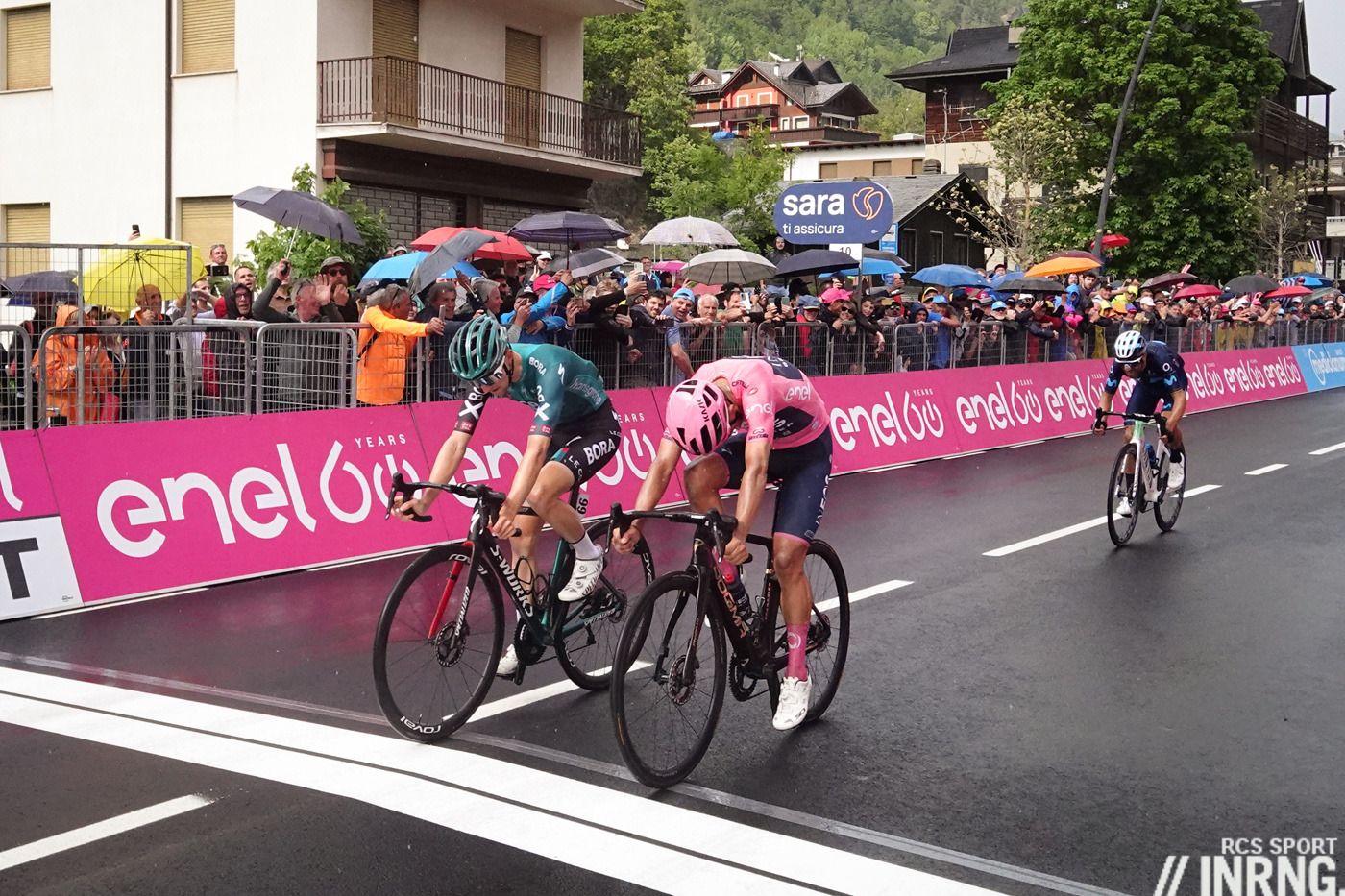 The Route: it’s straight up the Passo Tonale, a big transport artery and an ideal place for the breakaway to go clear, riders will be warming up before the start. There’s a descent and then a long stretch down the Adige valley that leads to the climb to Giovo, 6km at 7% and then an awkward traverse across to the Valsugana. 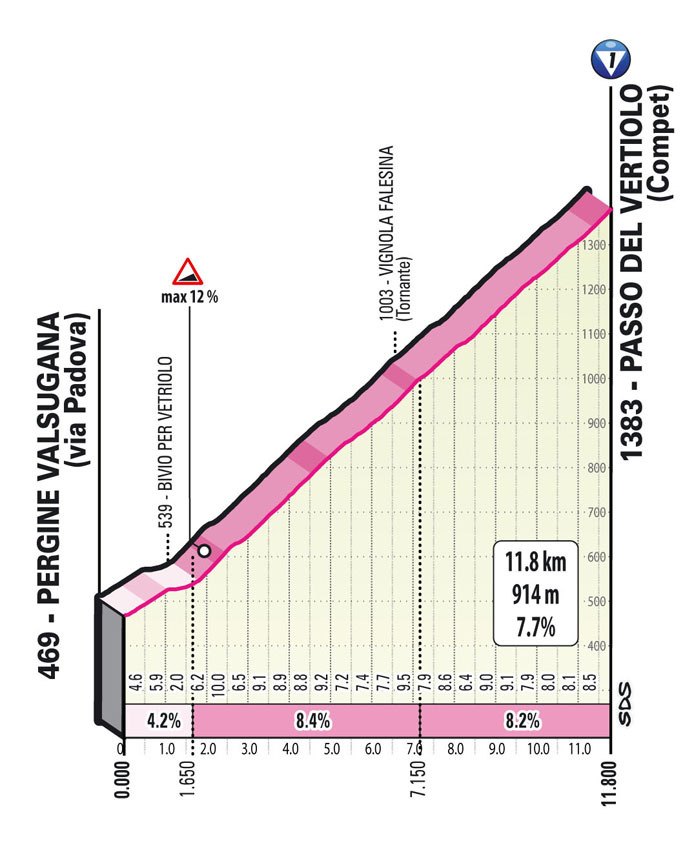 The “Passo del Vetriolo” is a tough, awkward climb – although the name’s an invention by the Giro, seemingly no such place exists on the ground – and the descent is toboggan-style to the valley. 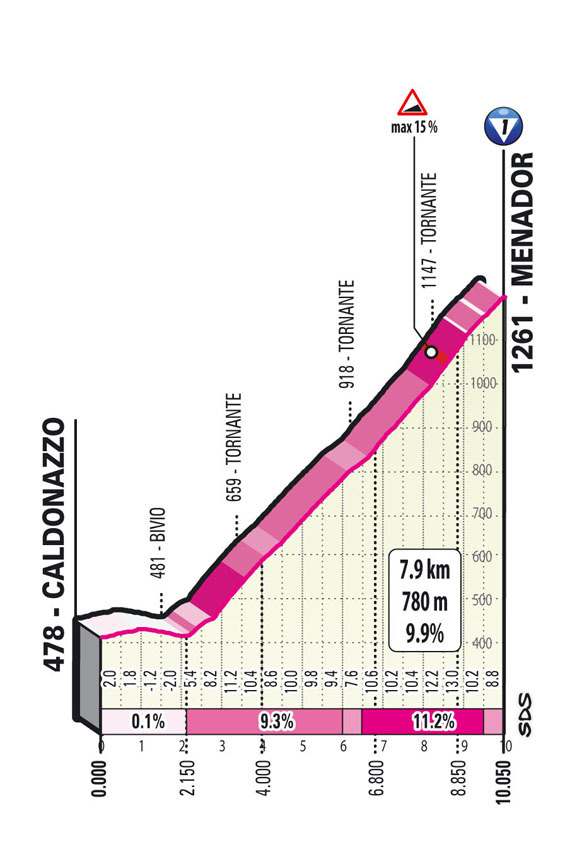 Now comes the Menador climb to Monte Rovere, also known as the Kaiserjägerweg. It’s a military road which normally means it was engineered so that horses could pull cannons up but this one’s not so simple, it began as a mule path and remains a tough climb on a narrow road. The 15% section on the chart above is not the only steep part, it’s a very hard climb

The Finish: after a wild climb up, a more gentle descent and then a 4% rise to the line for the final kilometre.

The Contenders: the breakaway has an even better chance of staying away than yesterday. Simon Yates (BikeExchange-Jayco) is the obvious pick again but as he showed yesterday, he can get in the break but still miss the winning move. Still who is suitable but didn’t redline yesterday? So many obvious names must be tired from yesterday. Guillaume Martin who fell to 16th place yesterday and even apologised to this Cofidis team mates, logic suggests he might be on the move today. Astana have Joe Dombowski and David de la Cruz if they’re not deployed to shepherd Nibali. Ivan Sosa (Movistar) might be fresher but is the form there?

Among the GC candidates Jai Hindley (Bora-hansgrohe) is showing a steely sprint which is also a sign of overall form and Richard Carapaz (Ineos) is so close as well.

Weather: time to break out the rain bags, cloudy, cool and it won’t be much warmer than 17°C.

War, what it good for? Edwin Starr was right when he sang “absolutely nothing” and piping up on a cycling blog to say “well actually” doesn’t feel right. One of the tragic benefits of war is today’s course uses an old military road, today’s Menador is the Kaiserjägerweg. It was once a mule path but was turned into a road to make fortifications prior to the first World War and then used as a supply line for the front between Austria-Hungary and Italy in the war. Today the fundamental point is that this is what peace is good for, when a bike race can cavort on the roads then times are good, at least locally.

It’s been about this time of year that the annual “Chicken Kyiv” race takes place in Ukraine, and yes that’s the name for the race and ride that both take place under UCI rules to the west of the capital amid the poultry farms and where the start and finish in the town of Буча (Bucha) in the Kyiv oblast or district, a place that’s become synonymous with the war crimes of the Russian army. Wherever you are, it’s probably not that far away.