The top of La Redoute doesn’t mark the end of the climbing and just when everyone else wanted a breather, Remco Evenepoel attacked with 29km to go and try as they might, nobody could even follow him. He stayed away to take a solo win in the race of his dreams. 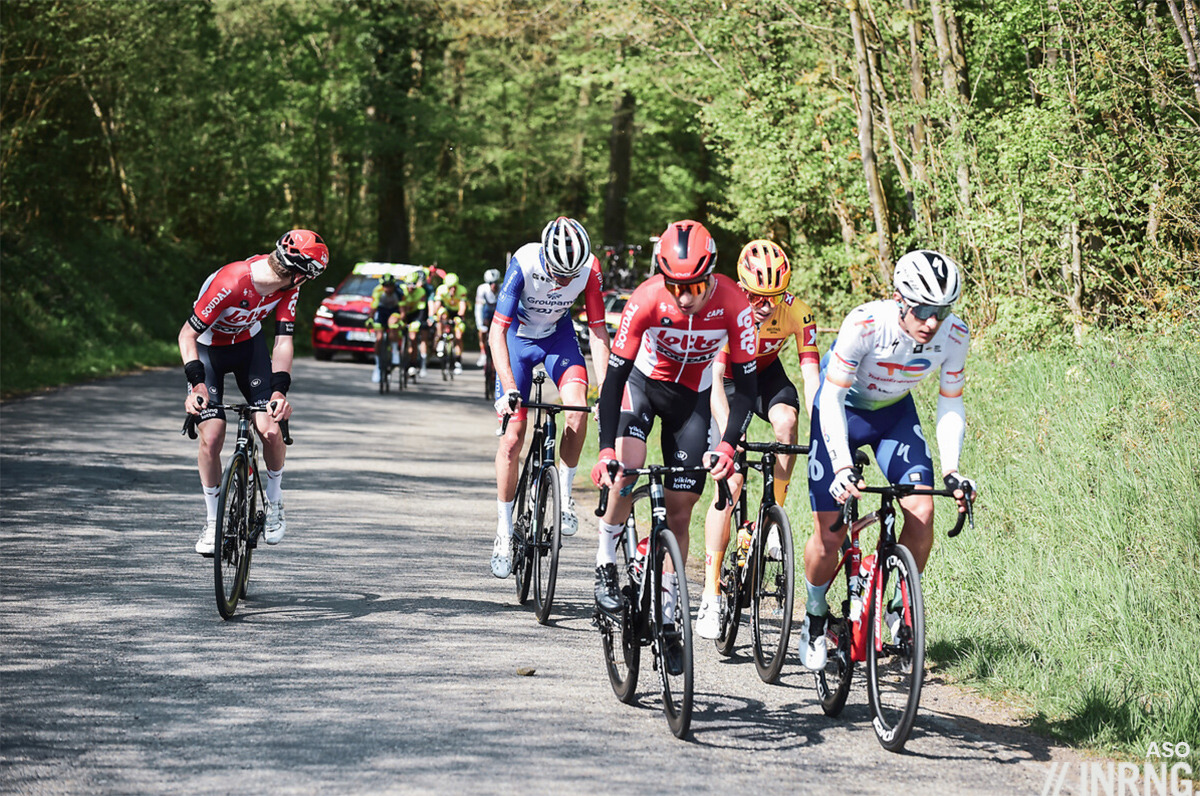 Sylvain Moniquet was the first to attack, a local from Lotto-Soudal and he was joined by five others and in turn the group swelled to 11 riders including Harm Vanhoucke and Bruno Armirail, these two arguably a class above their fellow escapees for the day. They got six minutes on the trip down to Bastogne with Quick-Step’s Tim Declerq among the workers on the front of the bunch. 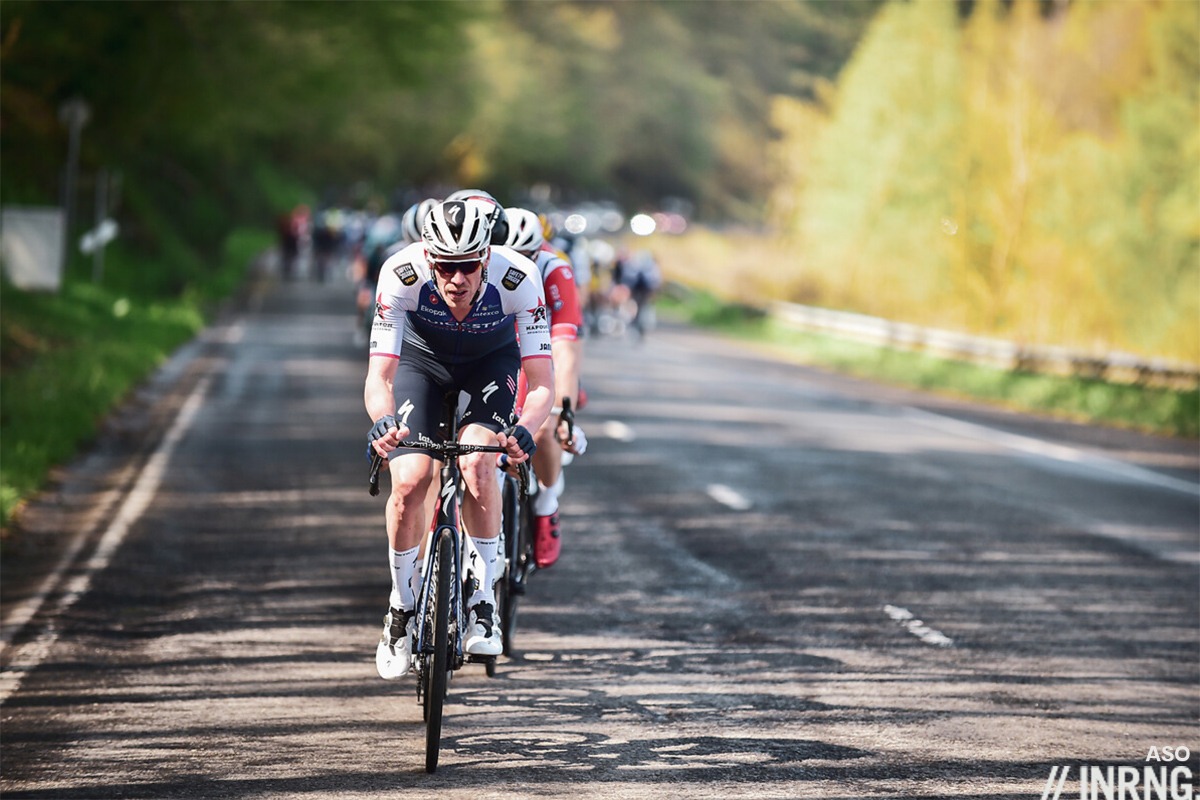 Declerq dropped off with under 100km to go, the roads had become hillier and a different cast of characters took over, riders like Luis Leon Sanchez of Bahrain. The eleven man rider was splintering and down to seven riders and three minutes once the Wanne-Stockeu-Haute Levée trilogy down.

As riders took up the full width of the road on the fast descent towards the Col du Rosier, there was a touch of wheels towards the front of the bunch and suddenly it seemed as if half the peloton was felled at 70km/h with riders flying into the ditch and woodland. Sport suddenly turned into carnage, this was what Italians call a “maxi-crash”.

Bahrain had been on the front and seemed to avoid trouble the best, although Dylan Teuns was briefly delayed. A little further back Alejandro Valverde was among those chasing and he’d get back. Julian Alaphilippe and his rainbow jersey couldn’t be seen. Then TV replays found him in the ditch, stuck between a rock and a pine tree as Romain Bardet made his way down to help out his fellow auvergnat. 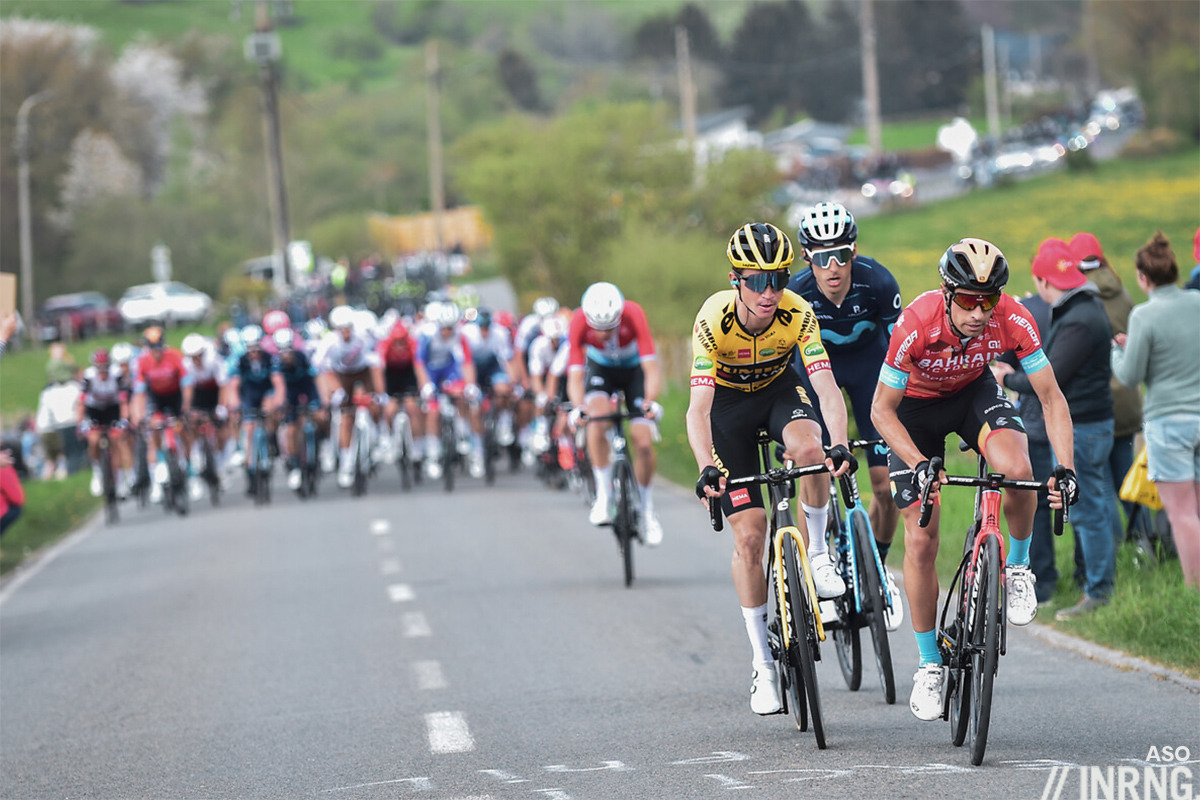 The Bahrain team stayed on the front and at one point one of them shouted “piano“, the universal peloton language for taking it easy as they took stock of the incident. This could only last so long and soon enough the Gulf team got back to work and used their numbers. Mikel Landa launched five attacks. None of them though was vintage Landa, the bicycling Zorro who slices the peloton to ribbons with his rapier attacks. But this did weaken rival teams as rivals responded and the likes of Sep Kuss and Carlos Verona were being sapped. Bahrain tried more moves with Poels, the same again.

Onto La Redoute, named after the fortifications once built at the top but today a tribute to Philippe Gilbert who grew up at the foot of the climb and raced up for the last time today. The breakaway had split to pieces with former soldier Bruno Armirail leading solo over the top.

“A lot of riders mistakenly think you should attack on the hardest part, but in reality you hurt people on the slightly flatter section that comes after this”
– 1985, 1986, 1987 and 1991 winner Moreno Argentin on La Redoute

Many of the Ardennes climbs are irregular, get to the top and there’s no reciprocal descent awaiting. La Redoute is a typical example, the climb proper ends with a left turn and the road levels out but the work isn’t done as it kicks up again soon after. And this was just where Evenepoel attacked. He launched with such power that the riders on his wheel just seemed powerless to follow him when this was the one vital job and they all knew it. Quick-Step had lost their co-leader so any Evenepoel move was going to be all-in, Alaphilippe was not sitting tight to launch later on. This was the obvious place for him to attack too, to build up a lead ahead of the Roche-aux-Faucons climb while others hesitate; rather than suffer the darting attacks of the climbers.

Movistar and Bahrain had riders to spare for the chase but they began to waive, as hard as they chased they couldn’t claw back time on Evenepoel. They needed to bring the gap back to 20 seconds at the foot of the Roche-aux-Faucons climb so that any jack-in-box attack could spring across the gap. But 35s was too much, arguably only Primož Roglič, Tadej Pogačar and Julian Alaphilippe could close a gap that wide but the first wasn’t racing, the second didn’t start and the third wouldn’t because he’s a team mate even if was still in the race.

Bahrain led up the climb, deploying Jack Haig to set the pace but the gap didn’t close much. Over to the false flat with its horrid concrete section that feels slow no matter what and Dylan Teuns and Aleksander Vlasov made powerful attacks and after a flurry of moves they were within 16 seconds of Evenepoel. But that was the problem, no closer. They had a wall to scale but had brought a ladder that too short: they could get to within 16 seconds but no nearer.

Evenepoel was solo and on his training roads and on the descent in Liège looked almost certain to win. Then Wout van Aert made it back to the chasers, a huge ride for him but fatal to chase effort because they all he’d grill them like a waffle in Liège if they chased hard. 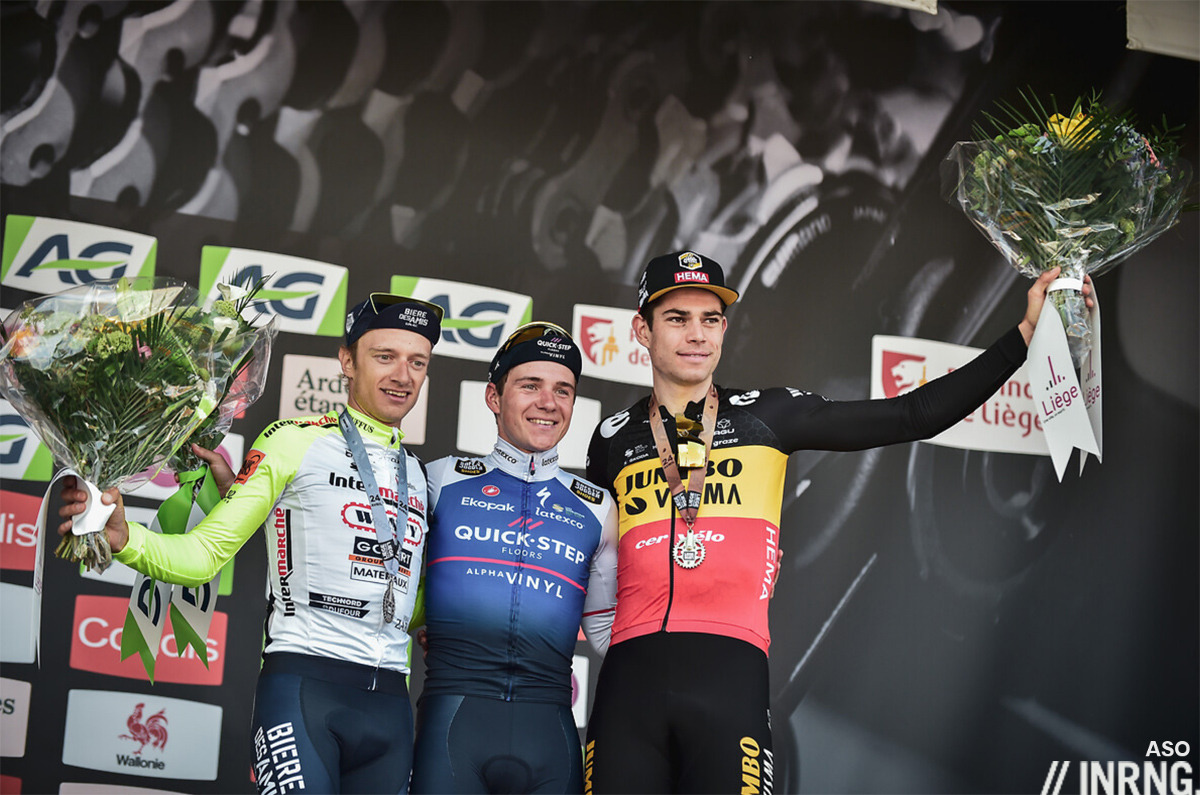 The Verdict
A thrilling finish with the relatively long range attack. Sadly the race was shaped by the mass crash, this wasn’t just a racing incident as it forced an unwanted and unwarranted selection. It left the Bahrain team able to soften the race… only to miss the winning move but nobody else could follow Evenepoel. The race had settled into a format with riders staking everything on the Roche-aux-Faucons climb, Evenepoel’s move on La Redoute broke with this and La Doyenne is all the better for this.

For Evenepoel, a win in the race of his dreams, “Ever since he’s started racing he told me about Liège, Liège, Liège” his girlfriend said to Belgian TV. It was his first go in the race and aged 22 becomes the youngest Monument winner since a 21 year old J-P Monséré won Lombardia in 1969. Yet still an unknown quantity, in his fourth season as a pro and his limits are unknown. The chaotic tactics of the Brabantse Pijl gone, he had a plan today and one built on improved foundations you could see today his descending has improved. The high mountains are all that stand between him and a grand tour win but that’s for another day.

Finally a spring-saving win for Quick-Step too. The team, including Evenepoel, have been on the receiving end of a verbal roasting in the Flemish newspapers and this gives Patrick Lefevere the last laugh, albeit at the cost of his other star rider reportedly with broken ribs, a fractured shoulder blade and a collapsed lung.

Intermarché-Wanty management will be even happier thanks to Quinten Hermans taking second place and another podium: they finish the spring classics as best Belgian team thanks to a big result for Hermans who’s been handy in the Basque Country and Ardennes but never reached this level yet.

The all Belgian podium was completed by Van Aert in only his second day of racing in April and his first time racing to Liège. A podium finish ends a successful campaign despite the long Covid interruption, taking the Omloop and E3 in March before last weekend’s second place in Roubaix and now knowing he can come back to Liège for the win.

That’s it for the spring classics, it’s Sporza to forza as the Tour de Romandie starts on Tuesday marking the World Tour calendar’s move into the Alps and the Giro now less than two weeks away.