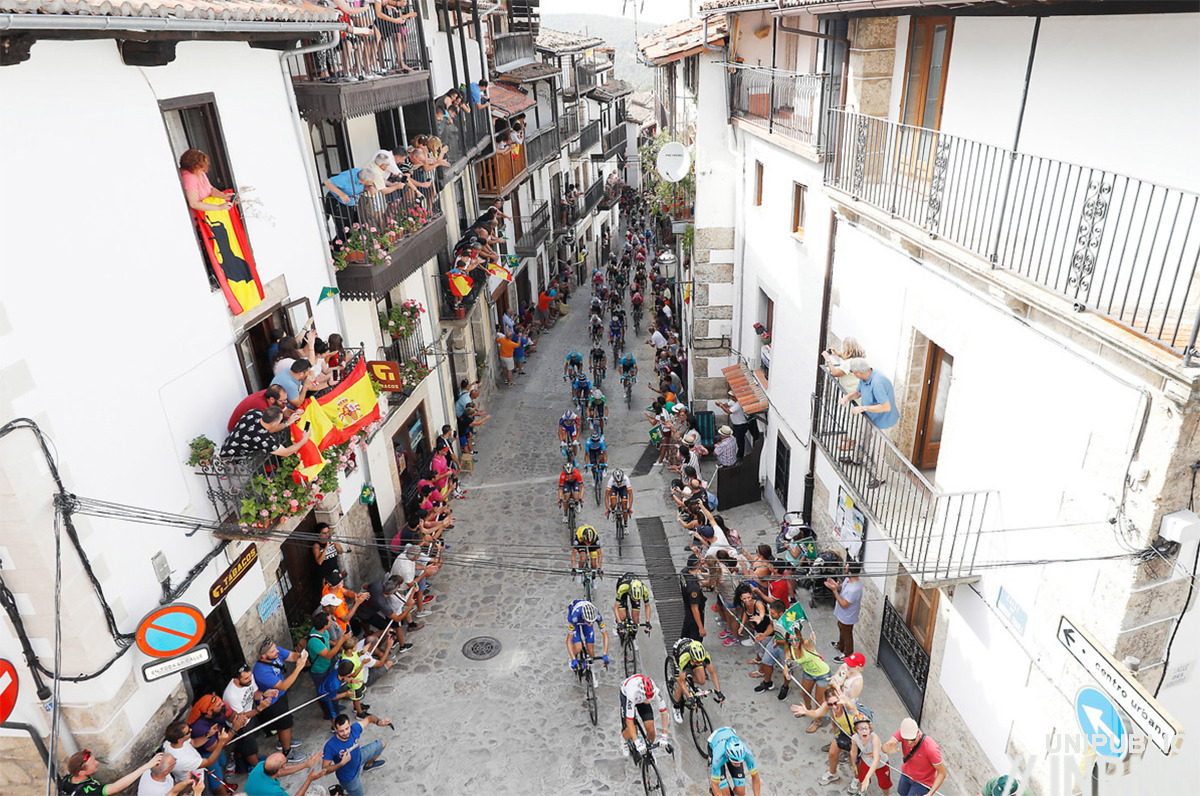 It’s time to get your rampón, the Vuelta starts this weekend. We’re into the back end of the season but the Vuelta is back in its August slot and the perfect way to prolong summer. It’s easy to follow, this is tapas cycling with a daily diet of lively stages. 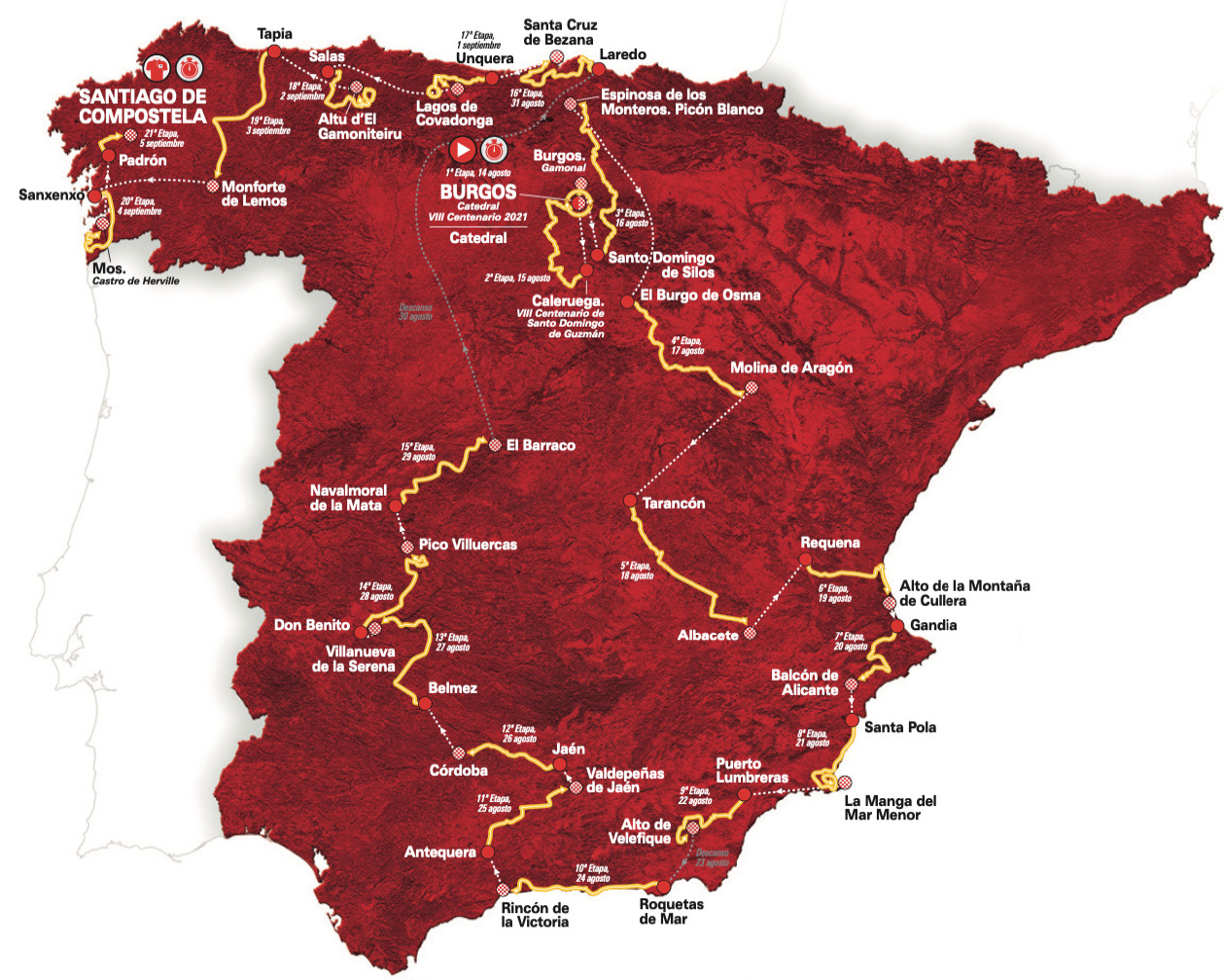 Route summary: 21 stages, bookended by a 7km opening TT and a final 34km TT in Santiago de Compostela. In between there are seven summit finishes, more mountain stages and six likely sprint stages, of which some of these are hilly or have finishes with gradients. There are time bonuses of 10-6-4 seconds on the finish line and designated intermediate points offer 3-2-1 seconds. 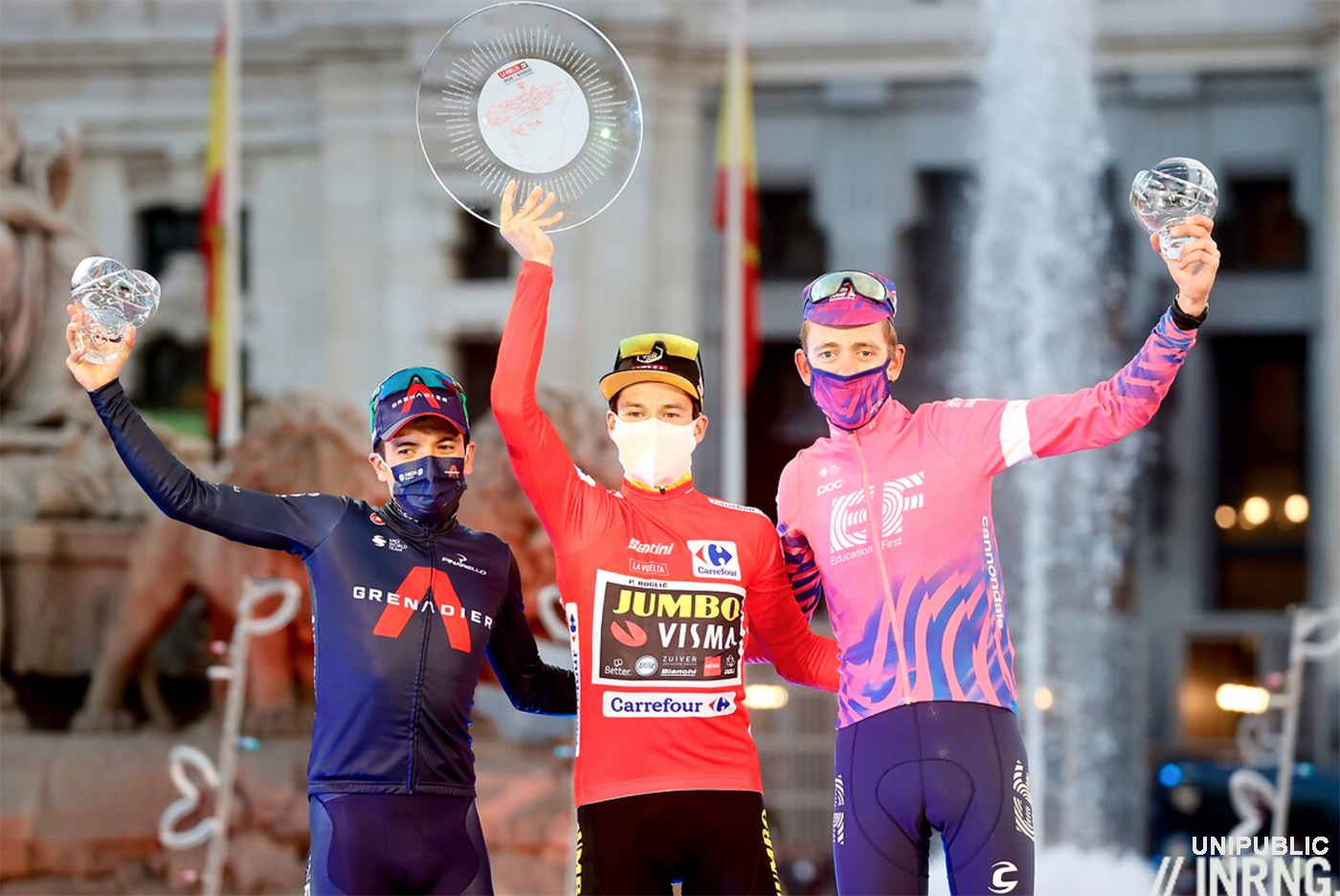 The Contenders: Primož Roglič won last year, doubling up on his second place in the Tour. He’s made for the Vuelta, the sharp climbs suit and he’s got a finishing kick that allows him to gather time bonuses better than the rest. As ever the third week is a concern and if he had a wobble on La Covatilla last year, the route then was more gentle whereas this year’s course is stacked with summit finishes in the final week. Still he’s got something to look forward to in the final time trial as he’s got an advantage over the rest of the field here. Jumbo-Visma bring a strong team with no sprinters, the only side goals are to see if climbers like Sep Kuss and Steven Kruijswijk can take a mountain stage along the way. 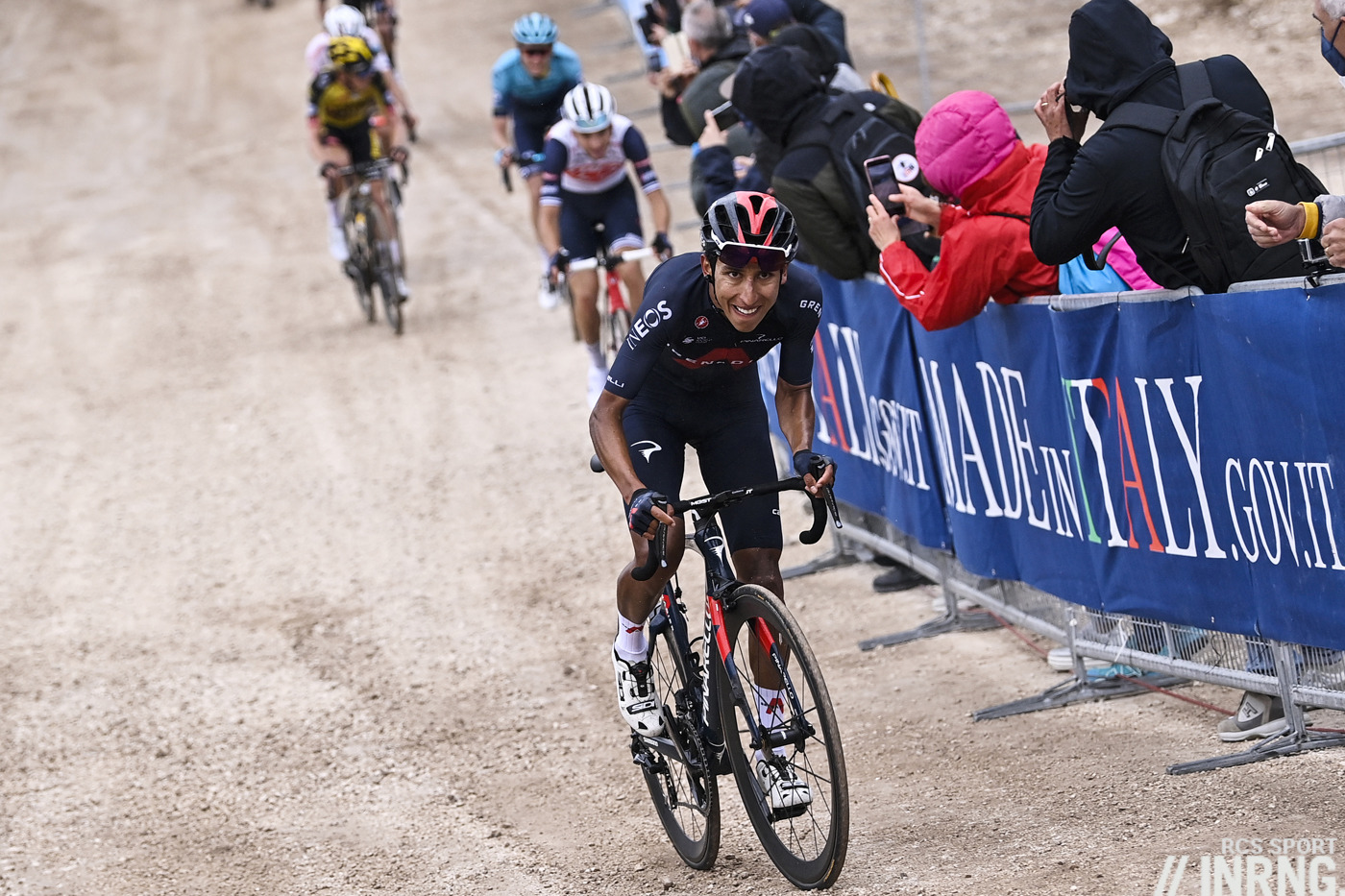 Ineos were supposed to go into the Tour de France with multiple riders capable of attacking only this never happened and after an internal enquiry they’re back with more of this ¿Who to pick? Adam Yates was always down to target the Vuelta since his move to Ineos was announced and was a convincing winner of the Volta a Catalunya this year amid a solid early part to the season but grand tour win would be a big leap up. Egan Bernal feels the easiest pick, doubling up after his Giro where he rode away with the maglia rosa and, apart from that crash, looked good in the recent Vuelta a Burgos. Richard Carapaz is back for more, the runner-up last year, third in the Tour, Olympic champion, can he keep the form across three weeks now? Probably yes, he is a tenacious, scrappy rider and an opportunist but this plays well with Ineos’s tactics, he can jump just when everyone is desperate for a breather. Pavel Sivakov is a GC contender but a work-in-progress while Tom Pidcock should be lively for some of the uphill finishes in his grand tour debut but he’s got his eye on the road worlds. Altogether it’ll be interesting to see if the team can take risks, big risks but they needn’t do this every day, first they’ll want to get the measure of their rivals. 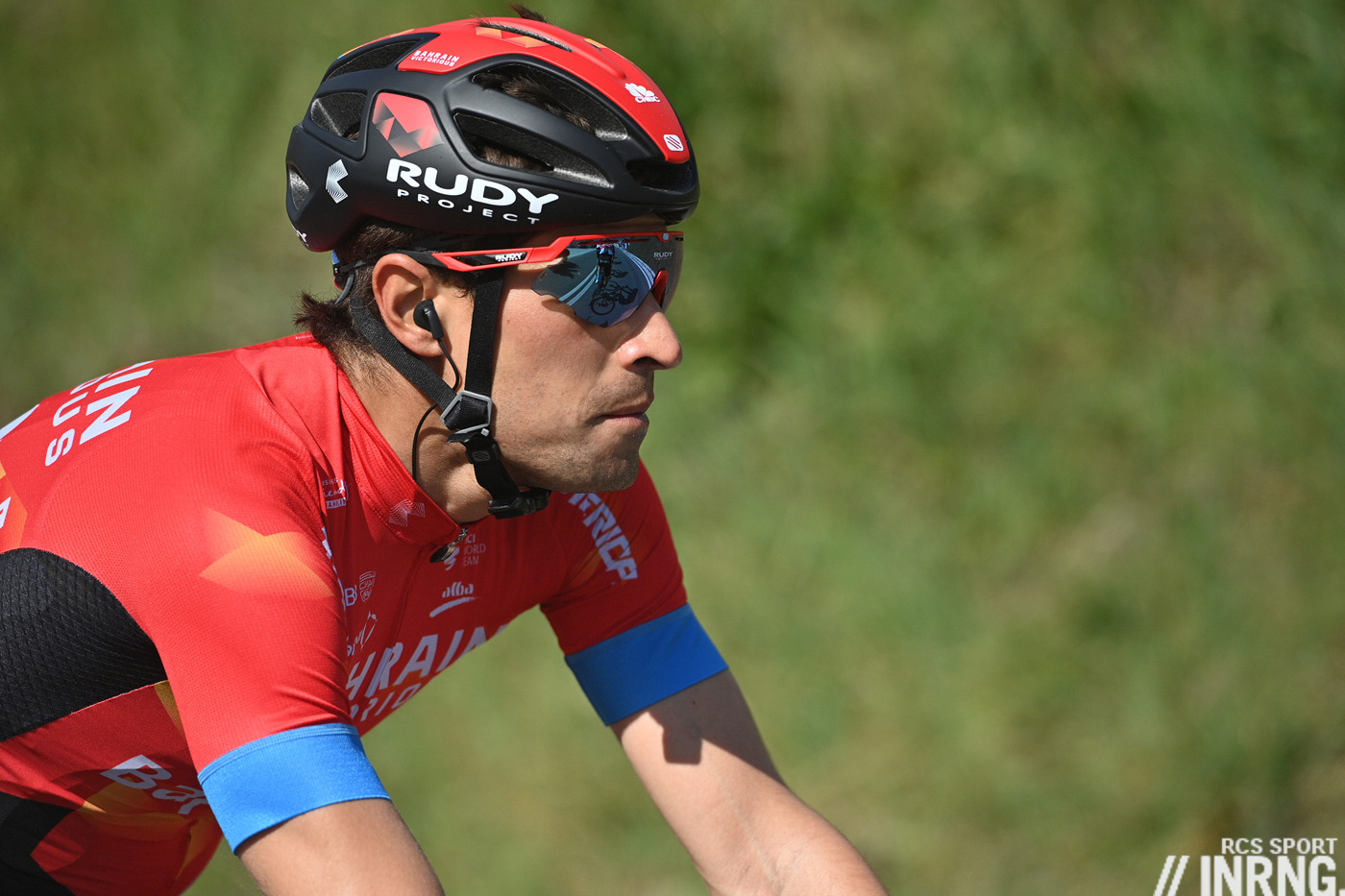 Mikel Landa is an attacking climber whose romantic style travels further than his palmarès, he can win a grand tour but a lot has to go right for him for a change and seeing off the riders named above is a big ask, he’d have to keep outclimbing them and go into the final time trial with well over a minute’s lead. Still the Bahrain squad is very strong with Jack Haig back after his Tour crash, speed climber Mark Padun will hope to replicate those Dauphiné wins, although he’s a marked rider now. Damiano Caruso is a luxury gregario, Wout Poels has plenty of experience and Gino Mäder’s gone from promising to victorious this season. So far so good but Jan Tratnik and Yukiya Arashiro are the keys to the team, Landa will count on them to close gaps. 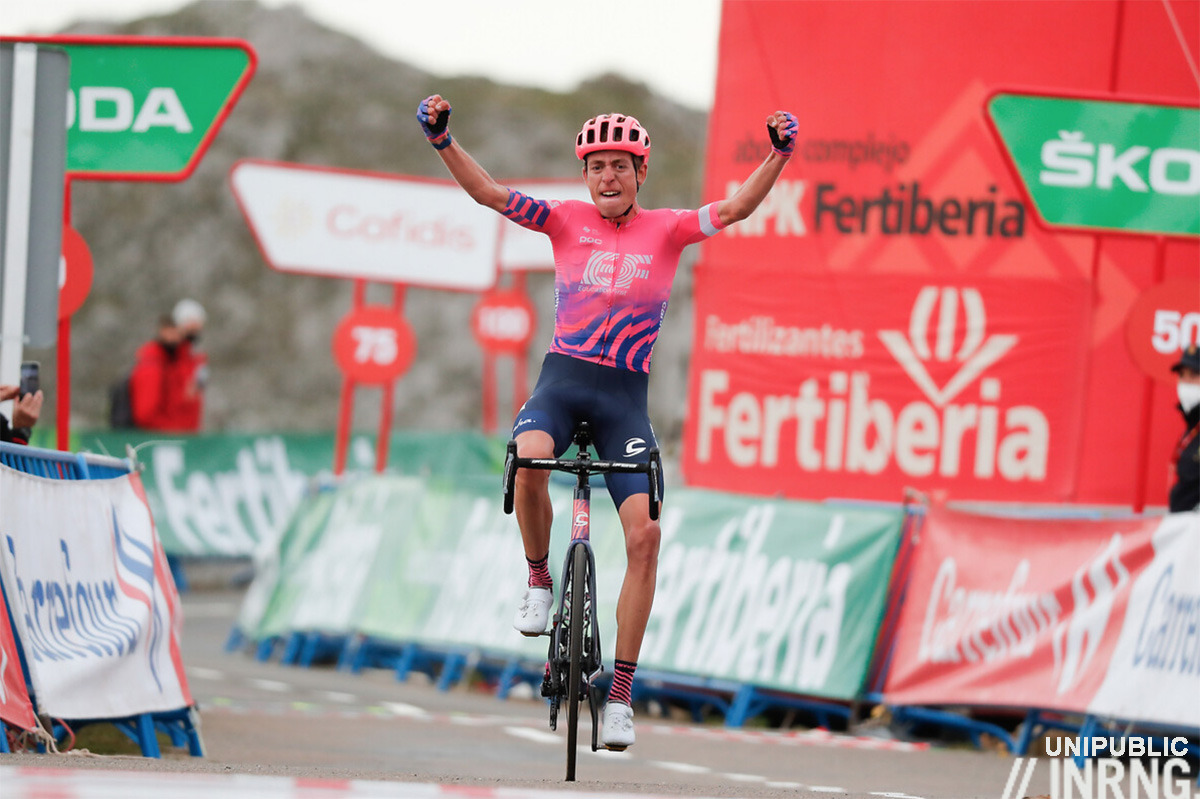 Hugh Carthy is consistent, the Landa antithesis. He’s also what we might call a third week time triallist, he won’t win any rainbow jerseys in this field but late into a grand tour he seems good at holding his ground for a lanky climber. EF Education-Nippo come with a decent support squad for him too. 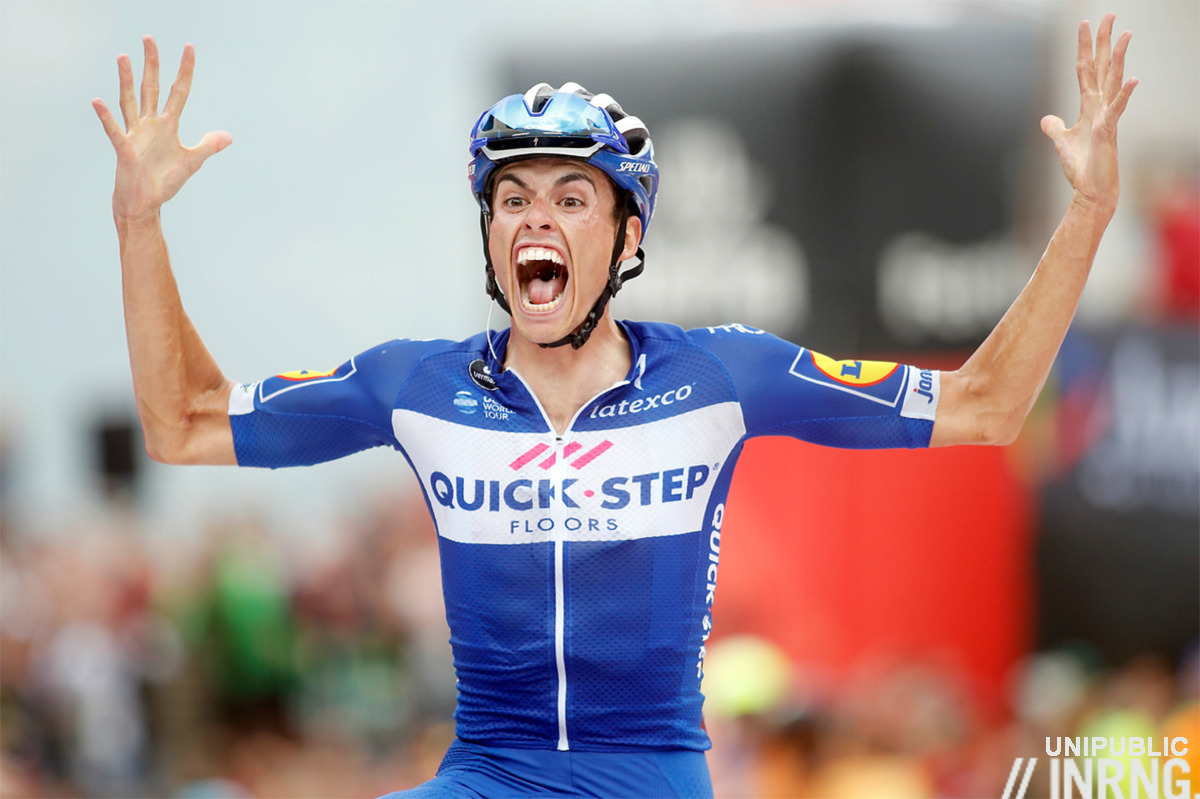 Sixth in the last Tour, fifth in the last Vuelta, Enric Mas is riding steady but I can’t find a decent photo of him in Movistar kit in my library which might say something, he is still short of repeating his second place in the 2018 Vuelta but should be in the mix. The same for Movistar team mate Miguel Angel Lopez who was once touted as a grand tour winner but converting podium promise into more is the hard part.

Romain Bardet has staked a lot on this Vuelta. A stage winner in Burgos last week, he could have taken the race overall but a crash while in the lead left him too sore for the final summit finish. But this was his first win in over a thousand days and the plan is to aim for stages here and see what happens. On his good days he can win stages and place high on GC but he’s likely to crawl in the Compostela time trial. At DSM Thymen Arensmen is one to watch too, a Dutch Miguel Indurain in the making.

Aleksandr Vlasov seems to have the ingredients of a grand tour contender but having burst onto the scene a year ago isn’t sizzling as much any more. We know he can place, but how to win? With a deal to move to Bora-Hansgrohe he doesn’t have to grind out a result and might prefer a stage win and the rest of his Astana team look like stage hunters rather than GC defenders.

Among the others, Bike Exchange have Lucas Hamilton and Nick Schultz for a top-10, with Bora-Hansgrohe it’ll be interesting to see if Max Schachmann can get a top-10 too with Felix Großschartner alongside. Deceuninck-Quickstep’s Andrea Bagioli and Mauri Vansevenant can feature, Lotto-Soudal’s Harm Vanhoucke is improving as a GC contender as in he’s steady rather than spectacular. Guillaume Martin (Cofidis) just needs a win more than a GC placing although his team might want the UCI points. Jay Vine (Alpecin-Fenix) made the leap from Zwift to the real world and is climbing well. Giulio Ciccone leads Trek-Segafredo but this is a learning mission before the Giro next year. There won’t be a next year for Fabio Aru (Qhubeka-NextHash), he was back in the results in Burgos but he did just this in Burgos last year too, translating this into three weeks is the harder part but it’d be a great comeback story in the race he won in 2015… only whatever happens he’s just announced he’ll retire at the end of the Vuelta.

Lastly UAE have David de la Cruz who is a strong rider but this says much about the team and why they are busy recruiting this summer because they might have the Tour winner in Pogačar but unlike rivals Jumbo and Ineos, they can’t yet spare a rider who could win the race.