The World Championships are on this week and some World Tour pros are riding the U23 races. Yes they qualify by age, but shouldn’t the category be reserved for developing riders?

History
Once upon a time we had amateurs and pros. The amateur category often saw up-and-coming riders win, for example a teenage Eddy Merckx won in 1965 and normally good amateur would turn pro. It was also dominated for a long time by older Eastern bloc riders but because they rode as amateurs for the whole career. The amateur category died out in 1995 and the U23 category was introduced the following year.

The U23 category was created so a rider – men only – could emerge from the junior ranks and have a series of suitable races. They didn’t have to compete against seasoned riders, nor over mega distances. The story is more complicated but let’s skip the quirks over the years. Today U23’s calendar is a good mix of classics and stage races and the U23 Liège-Bastogne-Liège is about 170km and stages of the Tour de l’Avenir or U23 Giro tend to be 140-160km. Perhaps only thing missing now is an equivalent for the women’s calendar because all the same issues of professionalisation and development are accompanying the rise of the Women’s World Tour and the gravitational pull of the new Tour de France femmes.

One point to dwell on is that Pro Conti riders could ride the U23 Worlds, this meant you had riders who enjoyed a full pro season, able to bank World Tour stage races and even a grand tour, going up against rank amateurs in the Worlds. If a picture speaks a thousand words, here’s pro Kevin Ledanois beating amateur Simone Consonni in Richmond 2015 to the title. 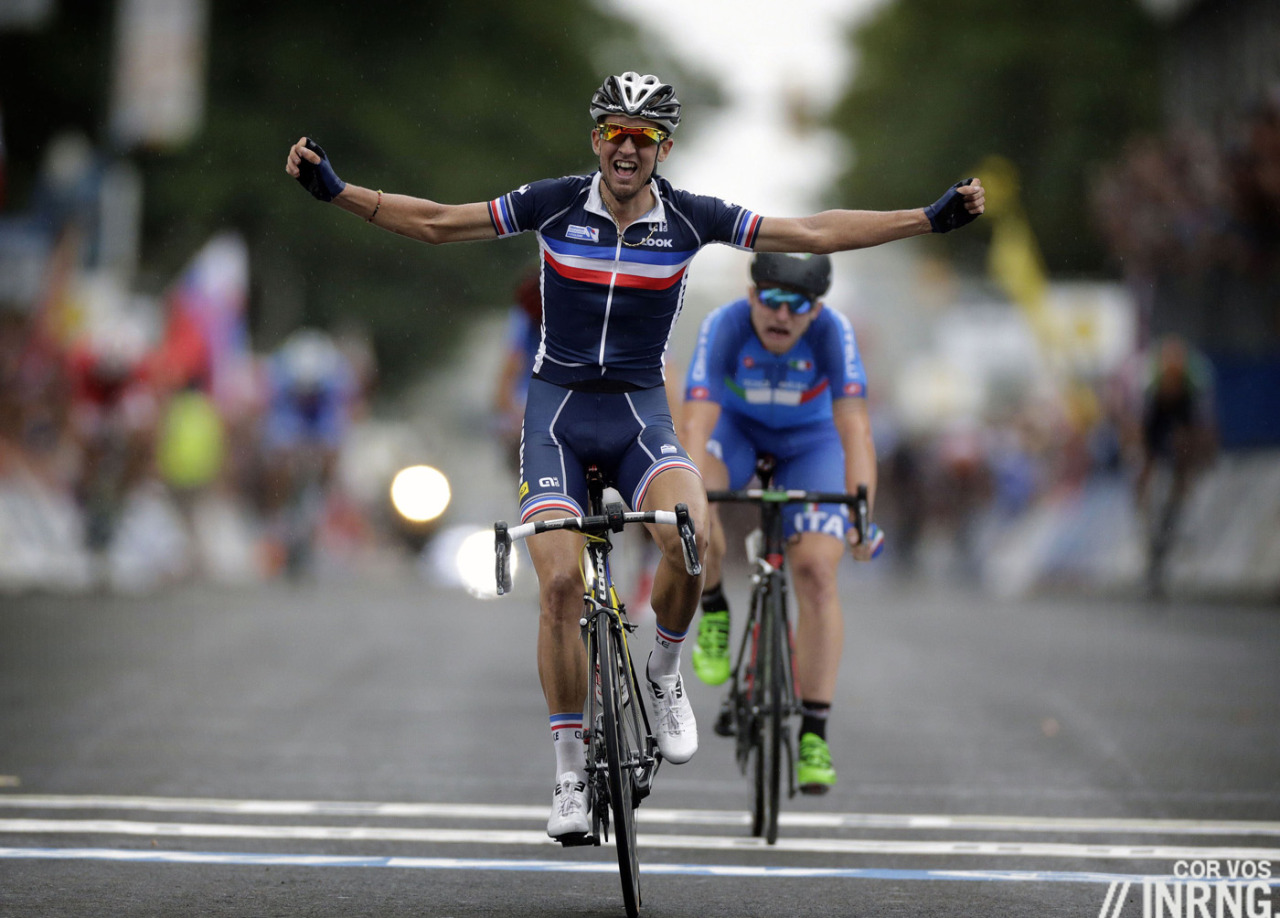 No wonder Consonni looks distraught in the image getting beaten by a pro. A solution to this anomaly came the following year and the U23 Worlds were opened up to World Tour pros as well. It made sense in that if some pros could already ride the Worlds then you might as well let more do it, there’s not much difference today between, being on Lotto-Soudal or Alpecin-Fenix, or Cofidis or Arkéa-Samsic when it comes to resources.

2021 Today
There was no U23 worlds last year so the issue didn’t arise. But we’re here now and a handful of established pros are riding the U23 races. I could list them but it’s not really about these individuals, it’s the system. If they’re racing against pros all season then stepping back down to the U23 ranks feels odd.

Now before anyone rushes to the comments to say “but they’re U23 and so eligible to race” that’s factually correct. Sure but they’re pros as well and if they’ve opted to leave the U23 ranks to pursue a pro career, how come they get to drop down for the Worlds? But that still misses the point, yes the category is called U23 and formally defined by age, but the spirit is more one of “development”, we could reprise the old French term for the category of espoir (“hope”). Yes riders are 19-22 years old but the real purpose of the category is development. A rider who’s joined a big pro team at a young age is still on a development path but they’ve crossed a limit and can pick other goals. Especially as even the most modest World Tour team today has a budget equivalent to Team Sky when it started and regulatory requirements impose dedicated coaching and support so the gap is wider than ever between a pro who might have done a grand tour this year for a big team and someone bossing the U23 programme.

In reality just because some can ride doesn’t mean they do. Remco Evenepoel is after the senior title this Sunday. But others might not. And again it’s not about those that do, it’s the system. You can see the incentives, a rainbow jersey – for day, they can’t wear it in a race – and also the UCI points on offer for them (125, the same as a 1.1 race and comparable to the 120 on offer for a Tour de France stage), plus a title for their selector and national federation who might have funding riding on results and so could lean on a rider to make themselves available for the day.

Conclusion
Yes 19-22 year old riders are eligible but the U23 category is only partly defined by its age bracket, the real goal of the category is a staging post between the junior ranks and the pros and elites. Surely a rider who has moved up to pro ranks can find other goals and leave the rainbow stripes to someone else hoping to convert them into a contract and a pot of gold?