Book Review: The War On Wheels 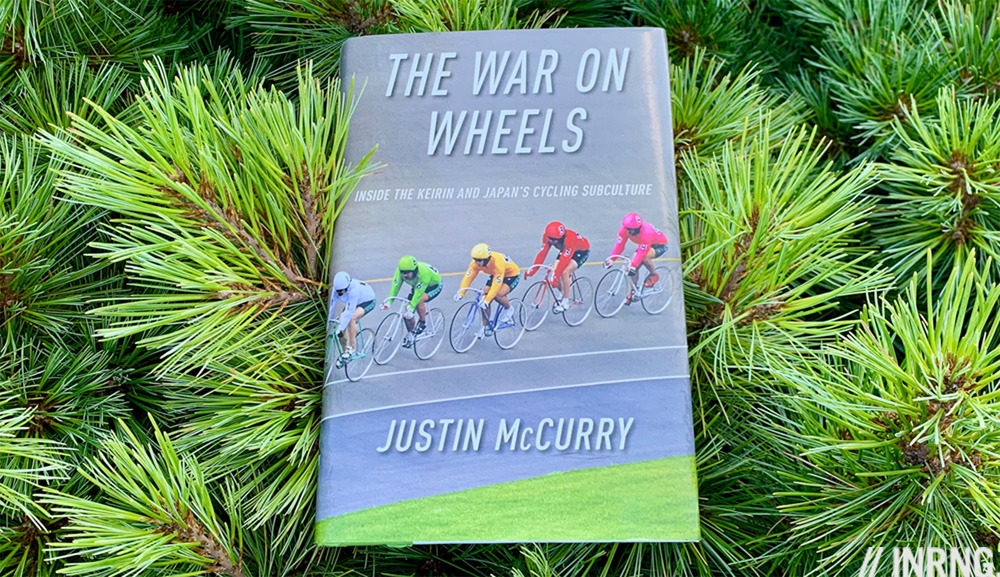 The War on Wheels, Inside the Keirin and Japan’s Cycling Subculture, by Justin McCurry

Keirin racing might appear on your radar for the annual track world championships, or even just for the summer Olympics. In Japan it’s a way of life for participants and punters alike, one of only four sports where betting is allowed. This rewarding new book takes look at keirin as a sport, as a business and along the way holds up a mirror to Japanese society.

Travelling in Japan, to ask about keirin tracks was to lose eye contact. Whether it was a friendly desk at Fukuoka railway station, a hotel reception in Hamamatsu… or even visiting a good friend in Ginza, a gaze was averted. Was it something I said? Had I mispronounced keirin and was instead asking for something absurd or even deeply inappropriate? Over a cold glass of koshu my friend explained keirin venues are often seen as dens for down-on-their-luck gamblers rather than sports arenas, the kind of place a visitor really ought to avoid. No tourist professional or concierge tasked with promoting the country or their home town would dare suggest a visit.

Keirin is a bicycle sprint race with nine riders on a banked track but it’s much more, an institution complete with apprenticeships and a role in society, although an unloved one. Sports betting is highly regulated in Japan and only allowed in horse racing, motor-boat racing, motorcycle speedway and keirin track racing. Keirin’s core audience is old and getting older, poor and because of gambling, poorer but it remains a big deal.

‘My life is on the line here!’ he yelled. He was one of many nuclear plant workers who spent their off days at the velodrome

This book carefully explains the history of keirin, an import from Europe built in the ruins of post-war Japan to generate tax revenues to rebuild cities, albeit with the money often coming from poor workers and unemployed former soldiers.

Is keirin a sport or a means of gambling? It’s both. Superficially it might easy to see it as the latter where, instead of nine cyclists on a track, punters might equally bet on marbles rolling down a tube or donkeys in pursuit of a carrot. There are no superstar cyclists, no household names and certainly for a tourist it’s easier to pick three numbers for a betting slip and hope for the best. 5-3-8, or maybe 2-8-5?

Yet underneath the Mario Toad-style helmets and oversized jerseys is more than a cyclist in body armour. There’s a whole system that began in the bombed ruins of Hiroshima and today starts with an apprenticeship at the legendary keirin school on the Izu peninsula. There’s has a codified system and career path similar to the sumo ranks and the makuuchi rankings. Seniority and regional rivalry shape race tactics. For punters dense form guides supply data like recent results but you can use thigh circumferences or even blood type to inform your wager. The year ends with the Grand Prix and, for once a prize worth of the label: 100 million Yen for the winner, not far off a million US dollars and surely the biggest cash prize in all of cycling?

The book does a good job explaining everything, it’s educational but doesn’t cram; although if you read pay attention to the initial explanation of “the line” as knowing the terms senko, makuri and oikomi helps later on. 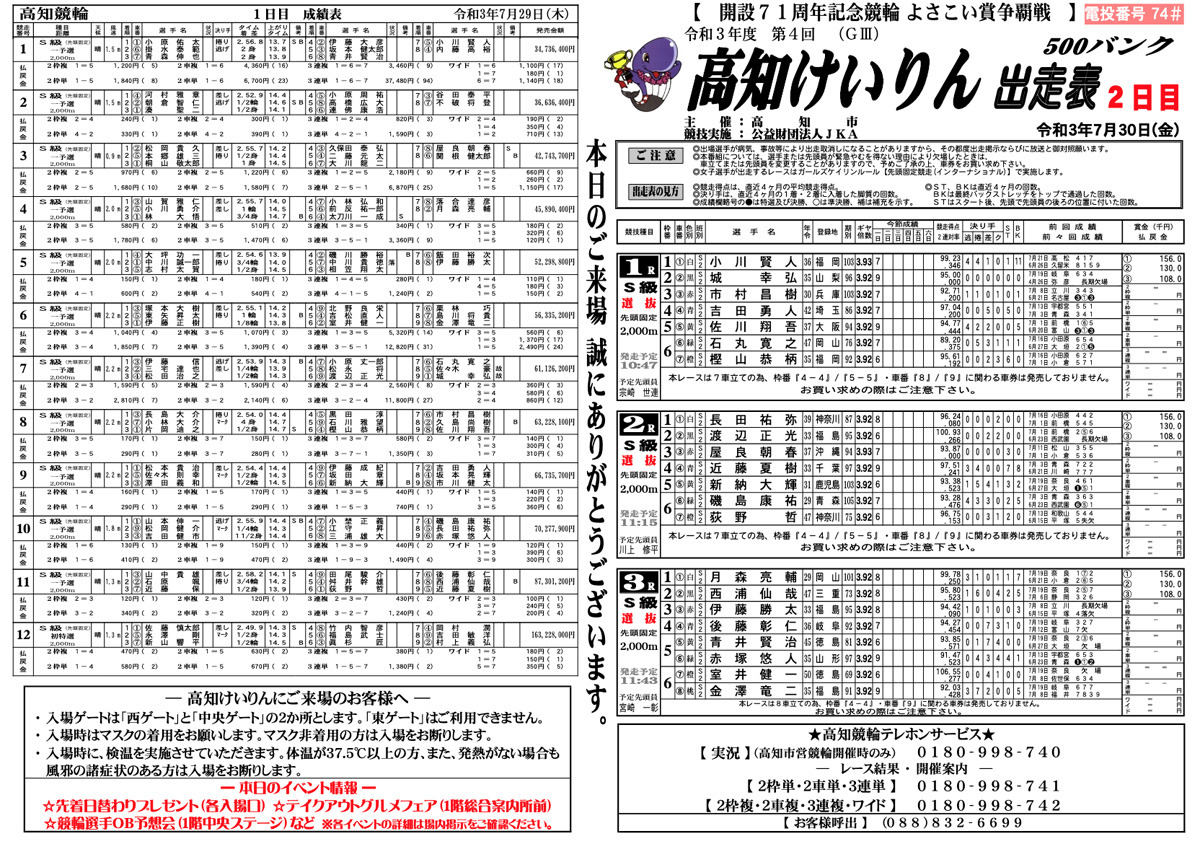 Gambling, rules, bikes, rankings and job opportunities make keirin racing very different from the short sprint we see in the Olympics and Worlds. As McCurry explains, keirin in Japan is 競輪 which uses two pictorial kanji: one signifies a match, the other a wheel and so you get a bicycle race. But the Olympic-UCI keirin is spelt in Japan as “ケイリン” using the angular katakana syllabary deployed for imported, foreign concepts, like, say, “テニス” for tennis or “アイスクリーム” for ice cream. This is more than linguistic trivia, it signifies a fundamental difference between the domestic and international versions of keirin that is literally spelled out. The book subtly explains all the differences along the way from rules to kit and avoids any blunt side-by-side comparisons.

The author has been a foreign correspondent writing for a British audience and this is evident a few times, evoking the unflattering reputation of Saitama, a commuter city part of Tokyo’s sprawl, McCurry compares it to Essex in England; also there a few moments where a paragraph feels like it is repeating something you’ve read earlier. Yet overall it is very well written. McCurry has been Japan since 1991 and it shows, this is not a foreigner parleying Wikipedia and Google hits into a “Look! Japan! Keirin!” book in time for the Olympics. It’s written an established Japanese resident with deep knowledge of the country and language. Much of the book places keirin in context and along the way there’s imperial change, economic history, demography, diplomacy and it explores the role of women in Japanese society over the years, whether at the first keirin race or the recent introduction of “Girl’s Keirin”. It runs wide and is all the better for it, especially because McCurry is trained to explain these matters to a readership abroad for his day job, there’s an eye for the telling anecdote or metaphor.

For all the explanation of keirin and track racing technicalities this is also ode to Japan. Others may celebrate, say, the cuisine or manga, this is one for the people, especially the būrū-kara blue collar workers and pensioners trackside with their pencils and cigarettes hoping for a windfall, and the artisans in backstreet workshops staying up late into the night to craft steel frames. There’s a wistful tone at times, just as keirin grew during the post-war boom culminating in 27.4 million attendees at the end of the bubble, today it’s down to 4.2 million and dwindling, just as other parts of Japan are also dwindling after the boom years. Still that could be four million more than the combined attendance for track racing across the USA and Europe where six day racing and other meets have gone from mass popularity to a marginal activity that pricks public consciousness every four years with the Olympics, and where terms like madison, pursuit and, yes, keirin, must bamboozle audiences expectant of a medal yet often unable to explain how it is won. Keirin though is much more anchored into Japanese society and here’s the rub: if it shrinks then many velodromes are in trouble, cities even lose a revenue source for social programs. A specialist training academy and even a way of life for many could be lost. This is a story of institutional decline rather than a mere change in leisure tastes and here keirin overlaps with other parts of Japan struggling with huge change, where rural villages to corporate giants like Sony.

The Verdict
An excellent book that goes beyond the velodrome to look at keirin’s place in Japanese society. It’s well researched and an easy read. Cycling fans will learn plenty about this big area of track cycling which deserves a book in English, there’s too much to cover for any glossy magazine spread; or blog post. Japanophiles keen for niche coverage will get their rewards too.

The War on Wheels is a story of modern Japan and that blends sport, culture and history into a subtly convincing mix. Start the book as a track racing neutral today, read briskly you’ll finish it certain to watch the keirin finals in the Olympics next week and promising yourself to watch the Grand Prix at the end of the year. And should you visit Japan one day and visit a keirin track be sure to report back to your hosts that you enjoyed the evening’s sport and see what they say.