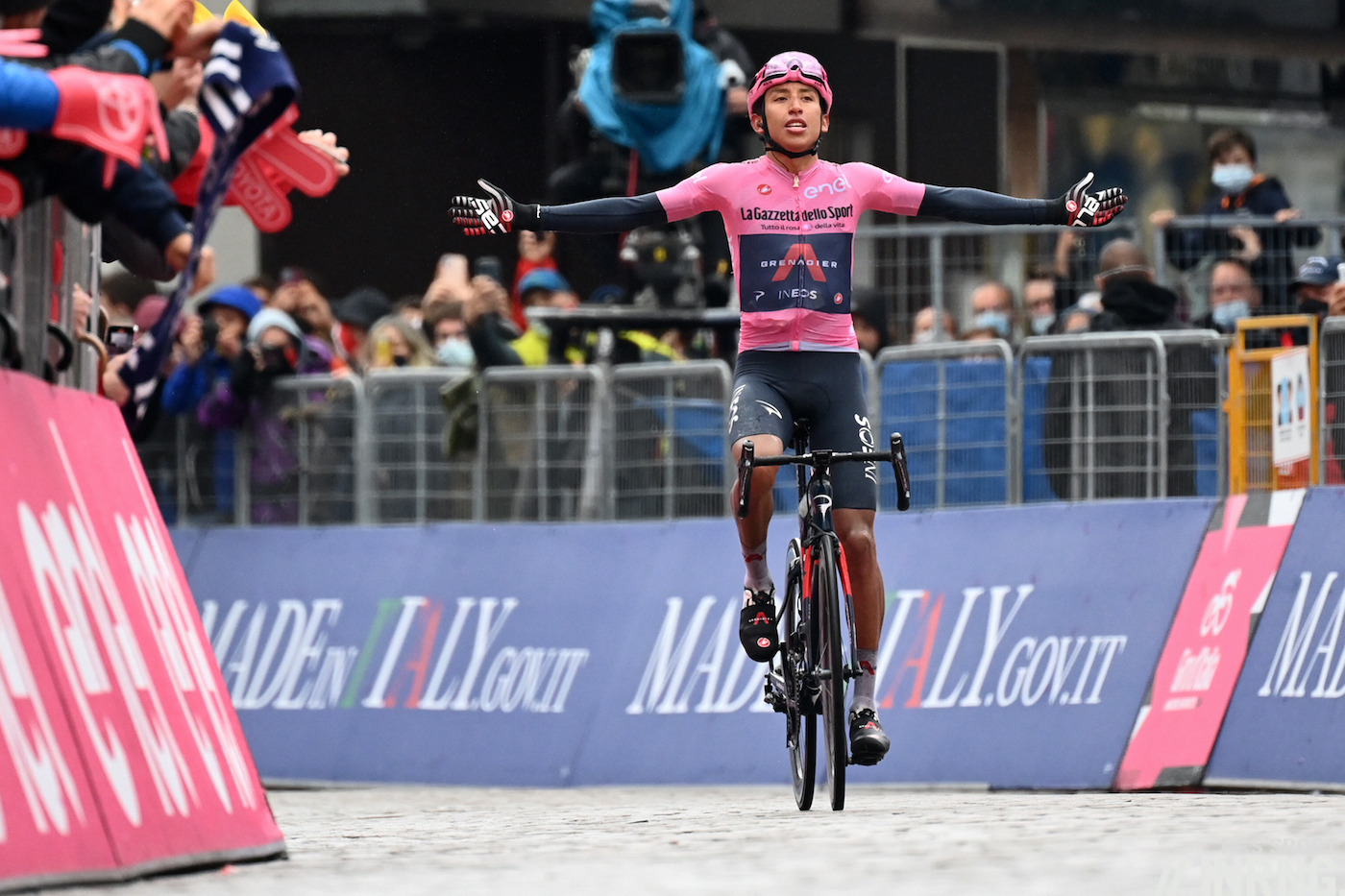 A week is a long time in a grand tour. Egan Bernal and Remco Evenepoel were sprinting for a three second time bonus on the stage to Foligno. A week later, Egan Bernal was sitting up in the streets of Cortina d’Ampezzo to remove his rainjacket, the better to show off his maglia rosa at the finish line. Who cares if this cost him a few seconds, his nearest rival overall is over two minutes down and as for Evenepoel, he lost 24 minutes yesterday.

Just as the winners get to write history, they narrate it and Egan Bernal told Italian TV he wanted “to put on a show”, to “do something special” and racing a hard stage in the grim conditions was just the kind of sport he likes. His back is holding up and defeat looks unlikely, only a shock collapse on a climb or an accident can cause problems but he’s got the insurance of a two minute lead and the assurance of the strongest team. 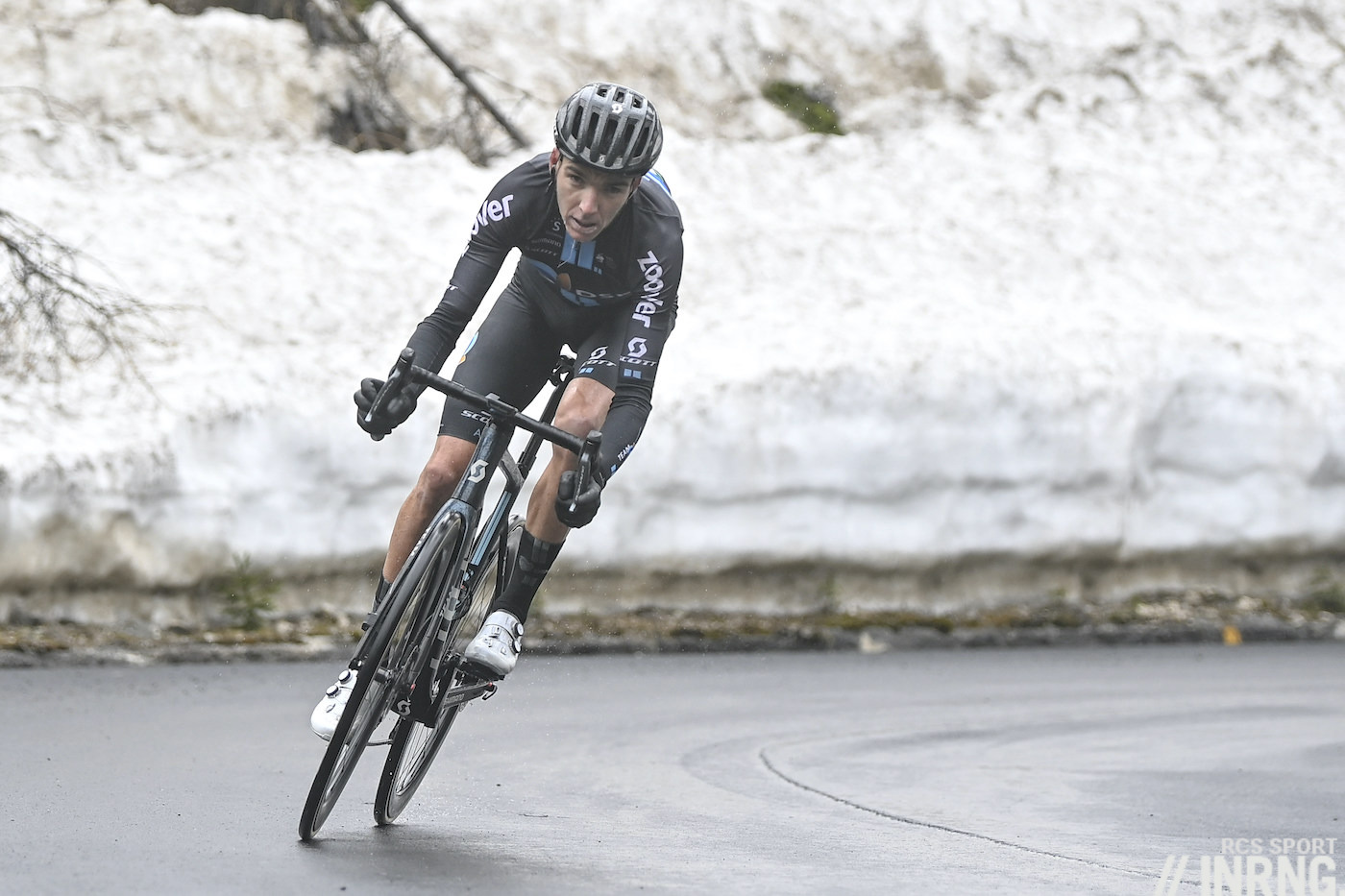 If Bernal’s cruising, the race for the podium and other placings is on. Damiano Caruso is second overall and obviously delighted with this, don’t expect any heroics with a podium in reach, we and he know he’s not going to beat Bernal in an uphill pedalling contest. Caruso’s challenge is from the riders behind him. Hugh Carthy, Simon Yates, Giulio Ciccone, Aleksandr Vlasov and Romain Bardet all within reach of the podium, six characters in search of a podium. They all have varying goals with Yates probably at one end as someone who just wants to win, probably Carthy next and then at the other end of the win-or-bust versus secure-a-podium-spot scale both Vlasov and Ciccone would probably sign up for third place today if they could. So there’s more to play for but it’s going to be a defensive game, often waiting and hoping for others to crack in the coming days.

It’s been a vintage Giro so far but too early to rate as a whole. We’re likely to see more breakaways succeed in the coming days as only Ineos are able to control the race. EF Education-Nippo worked hard yesterday and Carthy is up to third overall but in part because Vlasov dropped his rainjacket into his backwheel and Yates was on a bad day anyway and Carthy lost time to Bernal, Bardet and Caruso. So they not try to rip things up in the same way again. Astana tried to shake up the race on the Zoncolan stage but it blew up in their face. 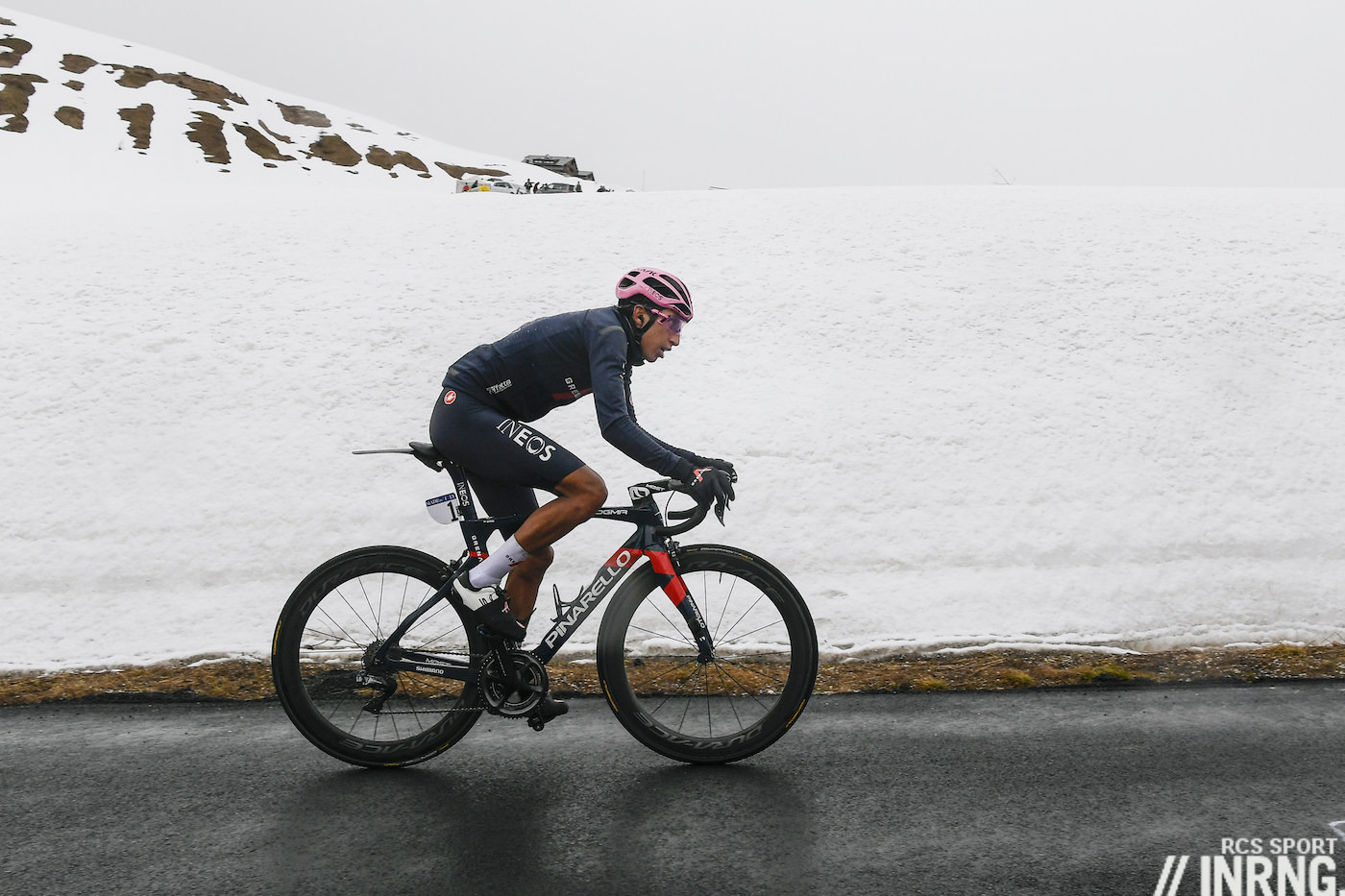 Open today’s Gazzetta, reach the pages on the Giro and there’s a full page about superheroes and legends. It’s an advert for Superman, Wonder Woman and Batman comic books rather than cyclists taking on 210km mountain stages. Why was Stage 16 abbreviated? Out of precaution, in case the weather got worse said race director Mauro Vegni to Italian broadcaster RAI, adding the conditions were alright on the morning of the race but he preferred to shorten the route before the racing started rather than be forced to do this mid-race. At the same time the CPA riders union rep told television all the riders wanted to race. Yet later in the day the CPA’s Twitter account thanked RCS Sport for heeding its request to shorten the course, a contradiction. It seems nobody, including their union leader, could say this aloud. You can understand why riders might be reluctant to become a human lightning rod every time they open their phone, but that’s exactly what a union delegate is there for.

Let’s consider two matters here. First is the immediate, practical issue of changing the course on the morning of a race and then communicating this to a public that had woken up expecting a tappone. People had booked days off work, some travelled to the forsaken passes at their expense. The CPA statement says it was discussing things “as early as 23 May”, as in the day before… and probably the evening before. The bad weather didn’t come out of the blue, it had been forecast for days and snow in May is not uncommon either. There needs to be better planning and protocols, rather than polling riders via the phones and approaching the organiser on the morning who decides with an hour to go.

The second matter is the very nature of cycling as a sport. What is the Giro d’Italia for? It uses the strapline of “the hardest race in the world in the most beautiful country in the world”. Are high altitude mountain stages now conditional on the weather, in a way they were not before, even after the introduction of the extreme weather protocol? Demonstrably yes but let’s not exaggerate, cycling isn’t about to become tennis where play stops because of rain. Pro cycling remains, bar any ultra event reserved for niche participants, the toughest sport. There are limits and they are moving, but these are undercurrents rather than manifestos. We need to reflect on where the peloton’s comfort zones are in the light of yesterday, the Morbegno protest in October’s Giro and especially because of what might come next. This is a difficult area, rider opinions vary, and may change during a race for varying reasons, from mood to rational self-interest. Comparisons with the past are valid, the peloton rides in the slipstream of its predecessors and performances are validated by comparisons, to race over the Stelvio is to be compared to Coppi, Gaul, Quintana or Nibali. We rightly mythologise the Gavia stage of the 1988 Giro won by Eric Breukink and the day Andy Hampsten took the maglia rosa while omitting that it was only 120km, done in under four hours. Yesterday’s stage was longer, albeit probably easier and certainly safer. To celebrate cycling’s history is to know the Gavia in 1988 was easier than Monte Bondone in 1956 and that this was in turn a cakeride compared to the forçats de la route era before telephones, let alone television were in use. Cycling might be softer today but society as a whole has got much softer, the former is often derided while the latter is celebrated as progress. Cycling’s unique selling point is the tough image, the rider as Hercules or Maciste, only this comes in a one-way sadistic pact where the public expects riders to endure conditions they’d shun but it’s this that makes bike racing special and so comes sponsorship and salaries. So where to strike a balance? It’s a big question and one that requires reflection rather than a hot take. See you for the stage preview tomorrow morning.