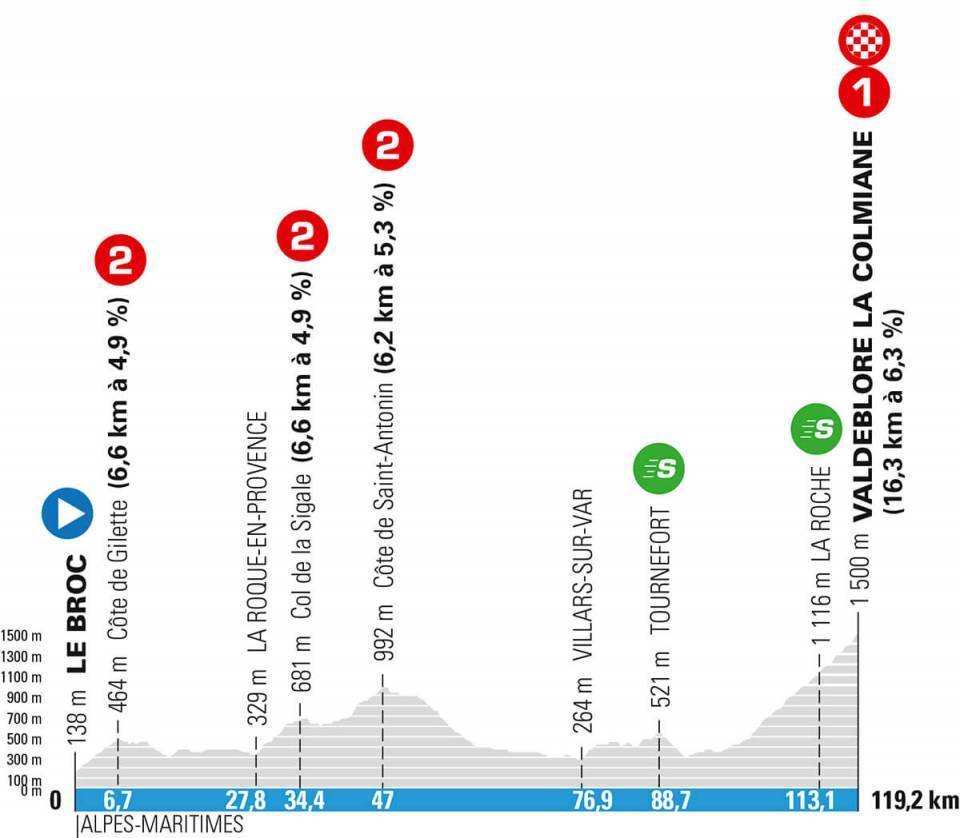 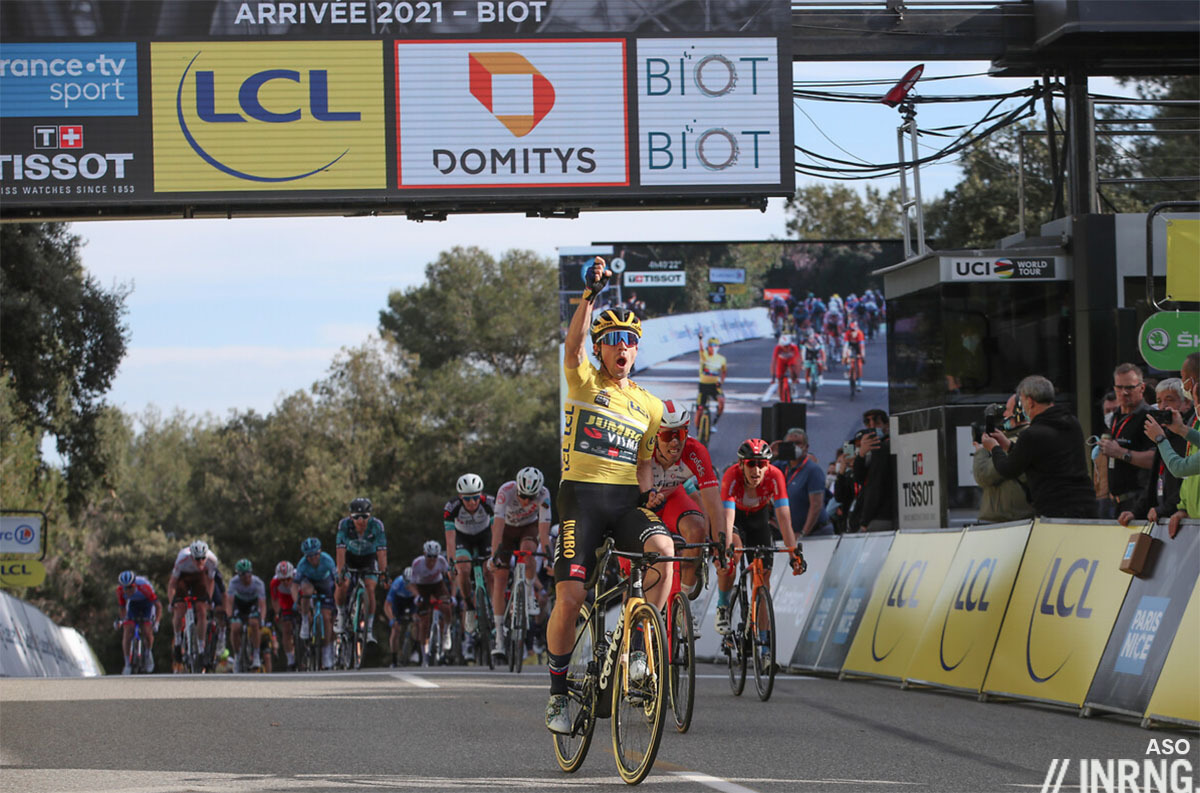 Prime Roglič: a fast start as riders tried to crowd the breakaway, but once a move got clear, it wasn’t going to be. Jumbo-Visma chased and things headed for an uphill sprint. At the foot of the climb to the finish with 2km to go, there was a wide cast of characters in contention. Primož Roglič was second wheel all the way up. Guillaume Martin tried his seemingly habitual badly timed attack – too late to get a gap, too early to launch a sprint – but this time he had a reason to try as his team mate Christophe Laporte was right in contention. This forced Roglič to chase in person, but he just rounded Martin and kept going. At a glance, it looked like a sprint win, but the length of the effort was remarkable. Look at the results and everyone was on the same time but nobody was close to winning.

The Route: an abbreviated route. Nice is a Covid hotspot in France and has endured local lockdowns for the last few weekends. With the case count now falling, the mayor wants to let people enjoy the coastline, so having to fence-off the area for a bike race isn’t ideal. As part of this, today’s start is shunted out of the city. The difference is today’s stage is 119km compared to the planned 166km route but it’s still the same: a dash to the foot of the big climb. 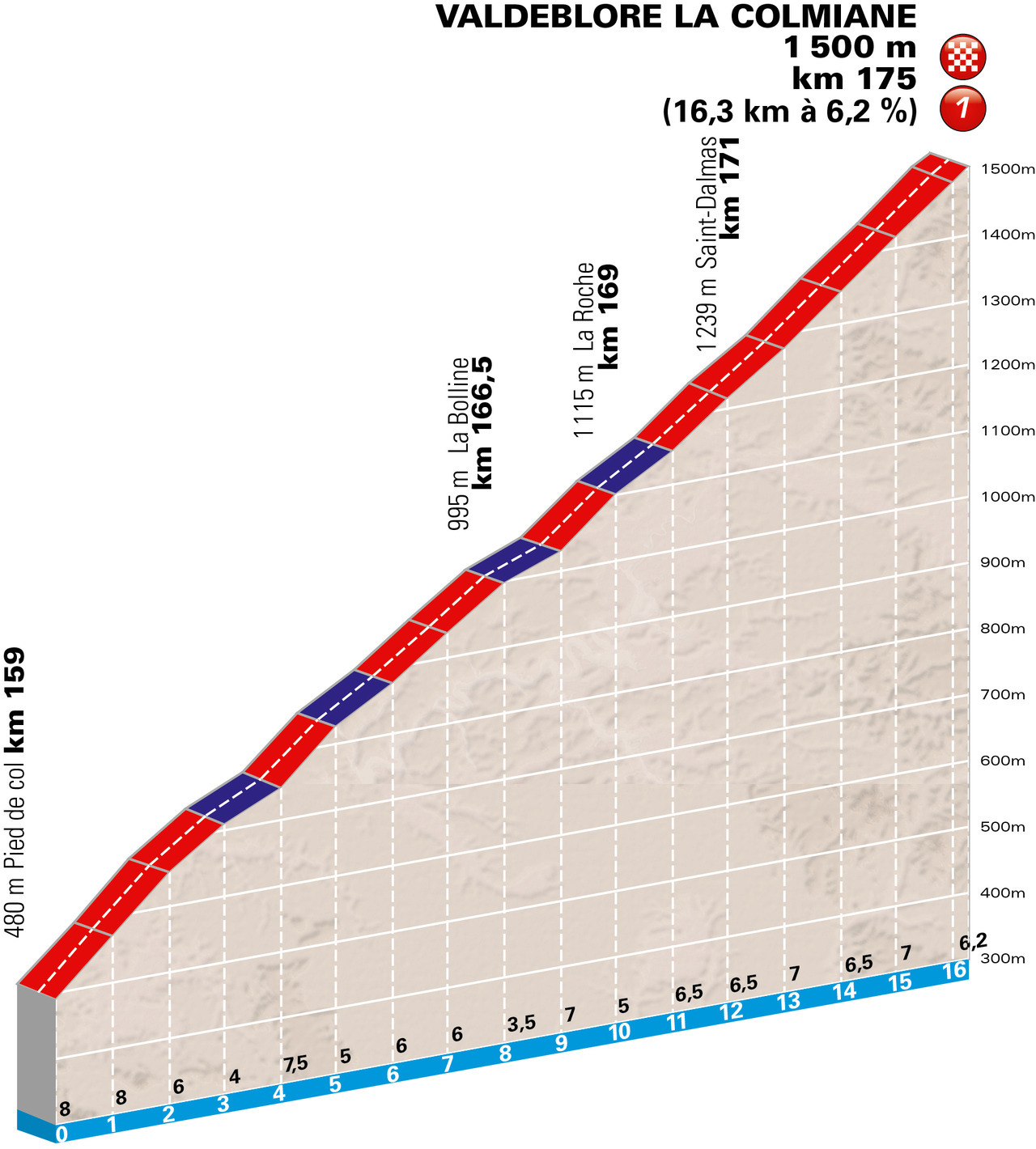 The Finish:the same as 2018 and 2020. It’s a 16km climb to the ski station of La Colmiane atop the Col Saint-Martin. 6.2% is not much but it’s still selective and crucially it’s often steeper, where the mid-way kilometre of 3.5% has a flat part and then a steep part so, as ever, beware of averages. Overall, it’s a steady climb and a wide road and the kind of climb where being sat on a wheel means saving energy, especially for the second half where the gradient eases a touch. This suits a group more than a lone rider, and in 2018, we saw many riders being ejected from the group long before any attacks started. It kicks up a touch for the finish.

The Contenders: it’s harder to imagine the scenarios where Primož Roglič doesn’t win than where he does. He could take a flyer with several kilometres to go, and as we’ve seen, he’s got the jump to open up a gap that others can’t match; he could sit tight and snipe the win in a sprint. Obviously, if he’s thinking like this, then mistakes can happen and overconfidence could be his downfall. But his team can help chase down rival moves and more. Still Sacha Vlasov (Astana), David Gaudu (Groupama-FDJ) and Guillaume Martin are the climbers most likely to cause problems, and the latter two are over a minute down on GC which means they don’t have to be closed down instantly by Roglič.

Weather: sunshine and 16°C with with some wind, 20km/h from the west and it could gust more. Cooler at altitude.

TV: an early finish is 3.00pm CET. It’s on France 3 for locals and VPN users, or Eurosport/GCN for most of the rest of the world and NBC Sports Gold in the US.

You can then cross to Tirreno-Adriatico’s big ski station summit finish at Prati di Tivi and presumably a day where Mathieu van der Poel, Julian Alaphilippe and Wout van Aert can’t win. The finish in Italy is at 4.15pm CET.