It’s the openingsweekend. The Belgian racing season begins and with a difference: everyone is supposed to watch from indoors. One of the best features of the spring classics in Belgium is how the public turn out, these are more than bike races to the locals so it’ll be an odd day without people, frieten and beer although last year showed us it could be done. It should still be a great race and here’s the usual preview with the route, contenders, TV times and more.

The Route: 200km and almost a secret. Because of the pandemic the organisers have permission to run the race but on the condition they don’t encourage people to gather beside the road. People can come out of their houses to watch but nobody is supposed to gather in groups larger than four. So no start presentation, no VIP zones and there’s less detail on the route; that’s last year’s profile above but it’s almost identical, the only difference seems to be in the start. As usual there’s the start in Ghent and the finish in Ninove, the two towns are just 40km away but the race makes it 200km by twisting, turning and looping in a small sector of the Flemish countryside. This means reconnoitring the course pays dividends because riders know where the pinch points are and which way the wind blows, although Saturday looks quite calm this time. The race sticks to the usual route and final 60km are where the action happens with a series of cobbled sectors and climbs.

The moneytime is with 18km to go and the Muur van Geraardsbergen. It starts climbing in town and then enters the woodland section which is steep and brutal and the pavé is rough, even if it’s been remade of late. The final climb is the Bosberg, 1.35km which is long for a climb in Flanders and just 5% average and almost in one long straight line and a final chance to break rivals. This time it comes after 188km and may not be as decisive, we could see some cagey riders hanging on with others reluctant to attack for fear of being brought back. There’s 13km to go and into a very slight headwind. 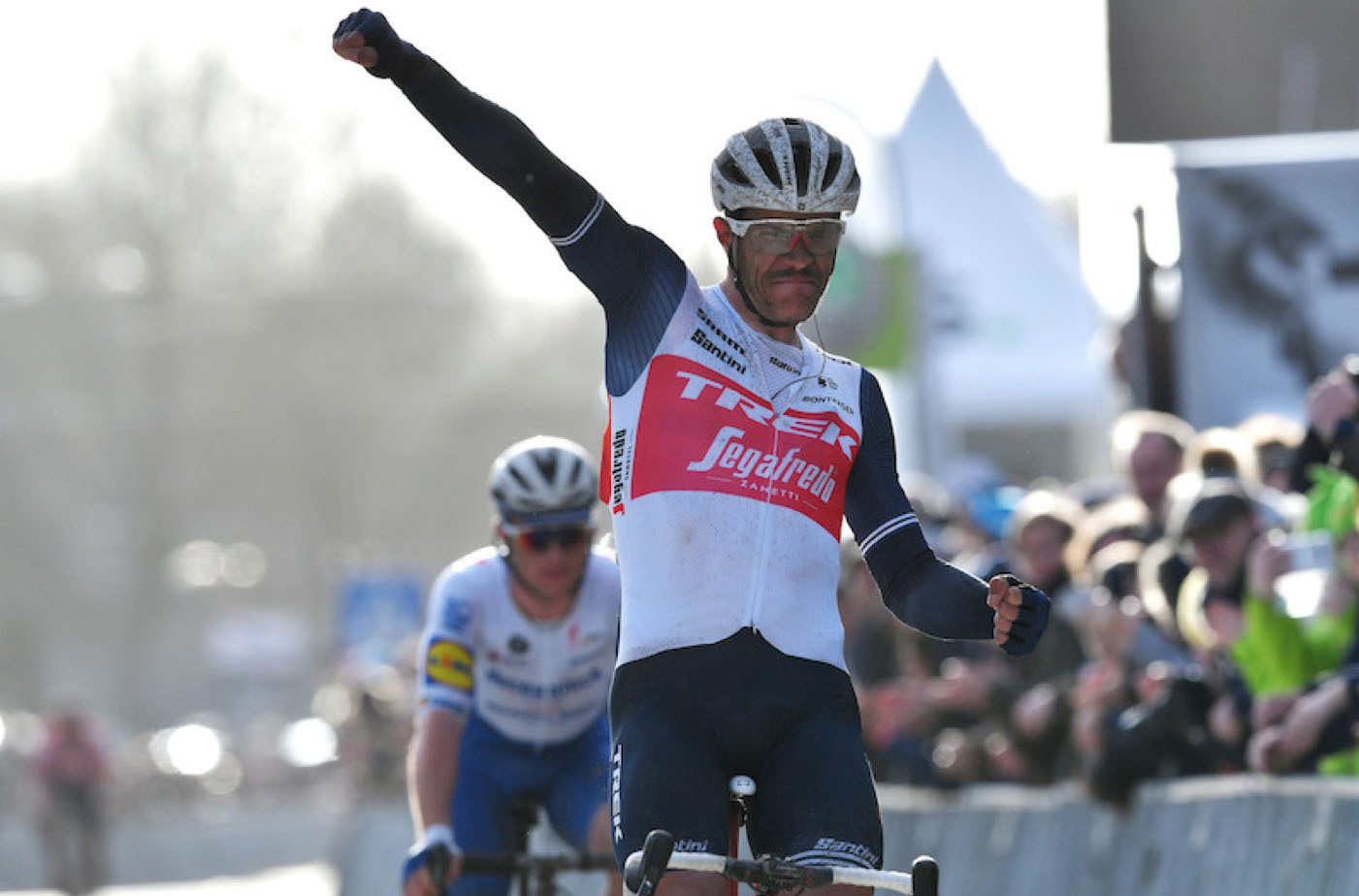 The Contenders: last year’s winner Jasper Stuyven (Photo: Tim de Waele/Getty Sport via team press release) returns as part of a Trek-Segafredo double act with Mads Pedersen and the Dane is probably the safer pick as we’ve seen his form in racing while Stuyven hasn’t started yet. Pedersen is as capable as Stuyven for a solo charge, but an even better sprinter. They’ll make a great duo in the upcoming races.

Deceuninck-Quickstep’s squad of seven riders has six conceivable winners. Julian Alaphilippe is back on Flemish roads to make amends for that motorbike crash that took him out of the Tour of Flanders last autumn . The bookmaker’s pick, he’s a very obvious rider, both visibly because of his bright white jersey with the rainbow bands and tactically too, he’ll look to attack on the climbs. But if he forces a split and races from a small group he’s got a good sprint for the finish, plus the form is there as he showed Egan Bernal on Mont Ventoux but was active on other days too. Davide Ballerini is a form pick after the Tour de La Provence as well, he dreams of the cobbles and packs a good sprint but we have to go back to 2009 for anything resembling a bunch sprint. Kasper Asgreen and Yves Lampaert could go clear but the benign weather conditions make this a bit harder and the risk is a repeat of last year where they’re joined by a faster finish, although they’ll exploit the team’s numbers. Florian Sénéchal is an outsider too and Zdeněk Štybar is 35 now but not done yet. Which leaves Tim Declerq as the human windbreak and bottle fetcher.

Ag2r Citroën have undergone some big personnel changes thanks to the new co-sponsor. Greg Van Avermaet is a twice previous winner here and doesn’t really need a third one as he’s got bigger frites to fry later in the classics season, the same for Oliver Naesen but both should be in the mix. In the past both have been strong in the classics but had to make moves at times because they didn’t have cover from team mates, together they’ll make an interesting tandem.

Lotto-Soudal have Philippe Gilbert and Tim Wellens but how to win? Gilbert knows, he won in 2006 but was a more explosive rider then. They’d need to get into the day’s late selection and then try and attack it but the competition’s against them and the terrain maybe not hard enough for Wellens. Lotto are perennial runners-up in the cobbled classics, yes they’re a Belgian team but a lot of the squad’s resources are behind Caleb Ewan winning grand tour stages and if they’ve been close the team haven’t won a World Tour cobbled classic; Nico Mattan won the “Pro Tour” Gent-Wevelgem in 2005.

Sep Vanmarcke (Israel) has been a perennial contender since he won the Omloop in 2012 as a neo-pro, outsprinting Tom Boonen but that’s been his only spring classic victory and he’s only won one World Tour race, he’s the sort you might bet on to place rather than win. But the form is coming and he should be close.

Team DSM bring new recruit Romain Bardet but look to Tiesj Benoot and Søren Kragh Andersen. Benoot can do the spectacular but SKA’s more likely to get the job done, he’s a fast finisher who is very hard to catch if he goes solo.

UAE Emirates can do the old 1-2 with Alexander Kristoff hanging in for the sprint and Matteo Trentin trying to infiltrate the main move, or even the reverse if they feel like it. Both have looked good but not sparkling in the early season races.

Among the others Bora-Hansgrohe bring a solid squad but need someone to who can finish the job, that’s Peter Sagan and he’s training in Gran Canaria, but look for new recruit Nils Politt. A similar story at Groupama-FDJ, EF Education-Nippo, Jumbo-Visma and Ineos, several strong riders but no obvious winner although for the latter Tom Pidcock is one to watch.

Ivan Garcia Cortina should make Movistar a lot more visible in the northern classics but how to win? Alpecin-Fenix aren’t a World Tour squad but can win on any flat course and even without Mathieu van der Poel, Jasper Philipsen and Dries De Bondt bring options. Total Direct Energie have a decent team on paper but they might need time to get the likes of Edvald Boasson Hagen, Niki Terpstra and Anthony Turgis working as a unit. Dylan Teuns (Bahrain) should feature but he’d be a stronger pick if the race finished uphill. Christophe Laporte (Cofidis) seems to have his mojo back and is capable of winning a semi-classic, see if he can feature here. Luke Durbridge (Bike Exchange) probably needs a longer, more attritional race.

Weather: it’ll be a calm Belgian spring day, partly cloudy, 12°C and a 5km/h breeze from the NE. This means the weather won’t be big tactical factor but this itself means the race will be less attritional, expect more riders in contention later into the race.

TV: local channel Sporza begin their coverage from 1.30pm CET with francophone Belgian channel RTBF starting at 2.00pm, as do the international channels like Eurosport/GCN. The finish is forecast for, whisper it, around 4.20pm CET.

Women’s race: it’s on TV too with coverage starting on Sporza’s website, plus the Eurosport Player/GCN app at 3.45pm CET and once the men’s race is done on the main channels they’ll hop over for the last hour. The finish expected around 5.30pm. It should be Annemiek van Vleuten vs SD Worx but with more and there’s a great preview over at procyclinguk.com.