The Giro heads into its final week with a tough day featuring a tricky Friulian finishing circuit. 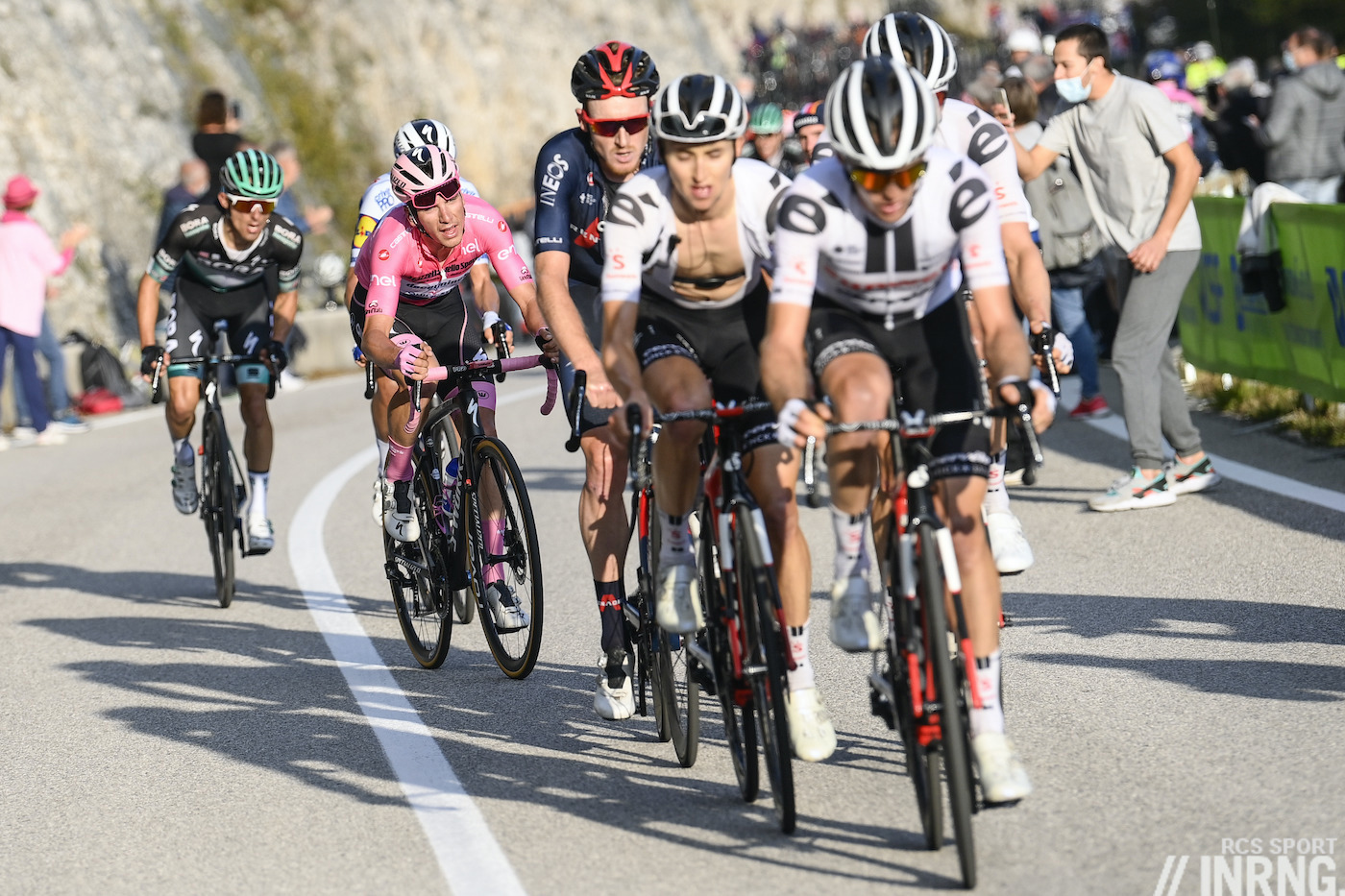 Rest day review: all analysis is provisional on the PCR test results due out this morning as we’ll know if any more big names and even entire teams will leave the race… or if everyone can now aim for Milan. 9.00am Update: one UAE Emirates rider is out. Milan here we come.

Sunday’s stage to Piancavallo was very instructive, the early part of the climb was the steepest and most selective. Sunweb’s Jai Hindley and Wilco Kelderman rode away with Tao Geoghegan Hart, and the Ineos rider took the stage win. João Almedia was dropped but battled to stay in contention while the rest scattered behind. Hindley was the most impressive, he kept pulling for much of the climb and if Kelderman could have pulled surely he would, as he stood to gain by taking time from all the others. As soon as “TGH” kicked for the finish Kelderman couldn’t respond. So what’s next? More mountains of course this week, weather-permitting but this week will see the Alps warm up a touch, at least the start of the week. Kelderman needs to crack Almeida and build a small cushion to take into the Milan time trial while it’ll be interesting to see what Ineos do, TGH is three minutes down on GC but one way to rise up the standings is contribute to the cracking of Almedia, to make the mountain stages harder.

The Route: a long day, 229km and a circuit finish. There are three climbs on the way to the circuit and all are hard going. The finishing circuit doesn’t look hilly but the profile masks some of the climbs, the one to Susans is a long straight ramp for 800m at 7% and then it’s over to Monte Ragogna is 2.8km at over 10% and irregular, with some tight hairpins. On the last lap it’s 13km to the finish, there’s a fast descent to the plains, a dash across and then uphill into San Daniele for the last time.

The Finish: a tough uphill finish in town but with no surprises as the riders will use the same roads on the circuit. San Daniele sits on a hill and has some gentle roads to get there but today’s rac takes the short cuts and so there’s plenty of climbing and once under the triangolo rosso the slope kicks up, the roadbook says 20% but that’s the upper limit on one side of the road for one metre. Still it’s hard going and there’s a right hand bend onto the 150m finishing straight which is 8% to the line.

The Contenders: a difficult stage to call as it’s open to a lot of riders. Could we see  a a third stage for Diego Ulissi (UAE Emirates)? He’s a fast finisher on a circuit that will eject all the other sprinters. But does he go in the breakaway or hang back among the GC contenders and hope they pick up the pace in the finish? If he goes in the break others will try longer range moves to outwit him too. Fabio Felline (Astana) is quick for a finish like today, Davide Villella (Movistar) is good for a hilly circuit from the breakaway too.

Among the GC contenders João Almeida (Deceuninck-Quickstep) might look on the wane in terms of winning overall but he’s got the punch for a day like today and Patrick Konrad (Bora-Hansgrohe) does too.

Weather: cold and grey, a top temperature of 14°C with the chance of rain.

TV: the finish is forecast for 4.30pm CEST. Enjoy and then flip over for the final hour of the Vuelta a España’s opening stage with the Alto de Eibar summit finish as the opening stage. It’s “only” the main road, the bus route, to the top but it’s still spicy and a tough climb with only a short section across the top. In other words to win the Vuelta you need to start today…