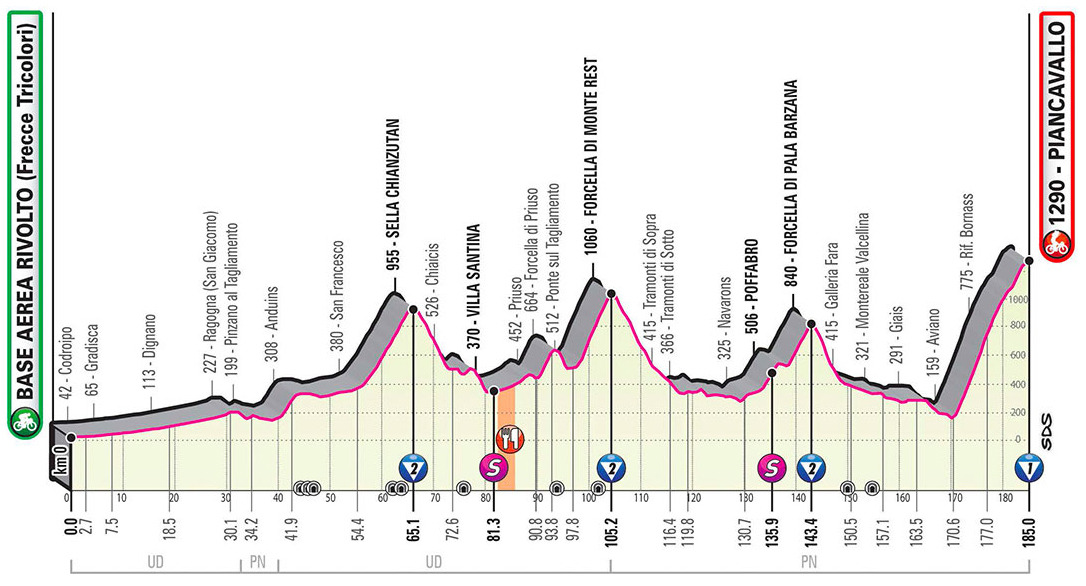 The Giro heads into the Alps with a summit finish and João Almedia gets his first big uphill test today. 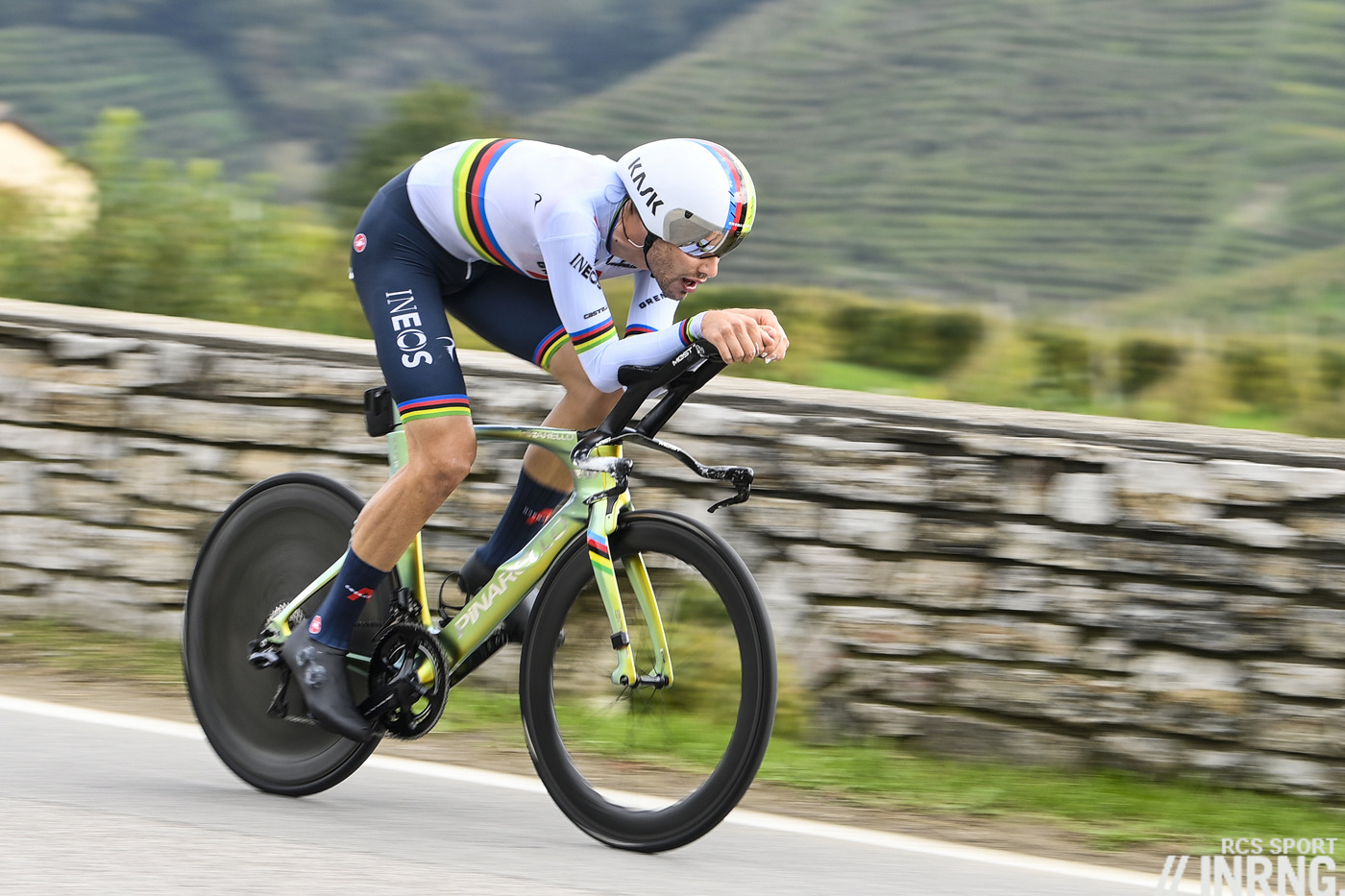 Prosecco supernova: the stage win for Filippo Ganna who had to macerate in the hotseat for hours after ejecting team mate Rohan Dennis. This wasn’t the most significant time trial ever but all the same Ganna has now established himself as the leading specialist in the field, and by a decent margin: on a 30km course he’s half a minute ahead of his nearest challenger. The second contest among the GC contenders saw Brandon McNulty come out on top and surge from 11th overall to 4th, he had a small gain on João Almeida but the maglia rosa took time on all his other rivals. Wilco Kelderman was close and is still within a minute overall. Can Almeida cope with the long climbs and high mountain passes? Tune in today…

The Route: 185km to Monte Cavallo. The Sella Chianzutan is the first climb of the day and has some flagstones and tunnels but it’s a nice even climb, 10km at 6%. Monte Rest is 7km at 7.5% and the Forcella di Pala Barzana is listed as 13km but the last four kilometres are the hard part at 7%. 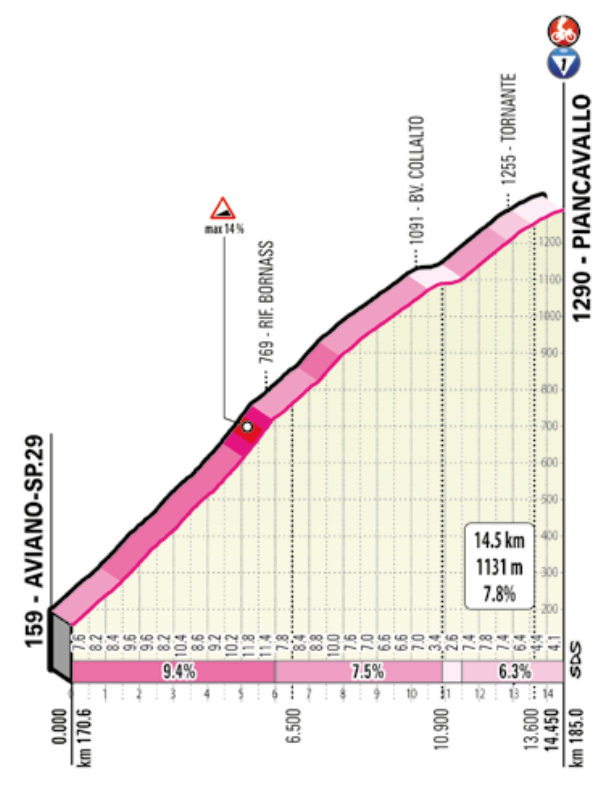 The Finish: the same as in 2017, a steep start but it’s all on a big open road. The first half is the steepest part with 10% slopes and long ramps between wide hairpin bends. With 5km to go the road stops climbing the flank of Monte Cavallo and rides across a plateau and it’s more gentle, often 5% before tightening up for 7% between 3km to go and 2km, the last chance for the climbers before the road levels out towards the finish line.

The Contenders: the breakaways have been doing well so far and there’s a good reason why: no team is trying to control the race. The likes of Deceuninck-Quickstep and Trek-Segafredo are rallying around their leaders but not trying to set a tempo to intimidate everyone. So pick a strongman or a climber who can get in a group that rides away and then drops the others to win today’s summit finish, think Mark Padun (Bahrain-McLaren), Geoffroy Bouchard (Ag2r La Mondiale), Jonathan Castroviejo (Ineos) or Einer Rubio (Movistar) as examples who aren’t on duty for GC leaders today. Ruben Guerreiro (EF Pro Cycling) has the mountains jersey and is another to watch but, just as we’re wondering about his compatriot, can he cope with a long climb?

Among the overall contenders Tao Geoghegan Hart (Ineos) is looking one of the most agressive but it’s hard to tell among the climbers, we only had Etna and than was an age ago. Still Jakob Fuglsang (Astana) and Rafał Majka (Bora-Hansgrohe) have the most pedigree for a day like today but Wilco Kelderman (Sunweb) is so far proving very consistent.

Weather: sunshine but cool temperatures, just 16°C in the valleys and cooler higher up.

TV: the final climb starts around 3.50pm CEST and the finish is forecast for 4.30pm. Of course today is also the Ronde van Vlaanderen so be ready to channel hop or switch browser tabs.