A touch of Milan-Sanremo with two late climbs thrown in to spoil things for the pure sprinters. 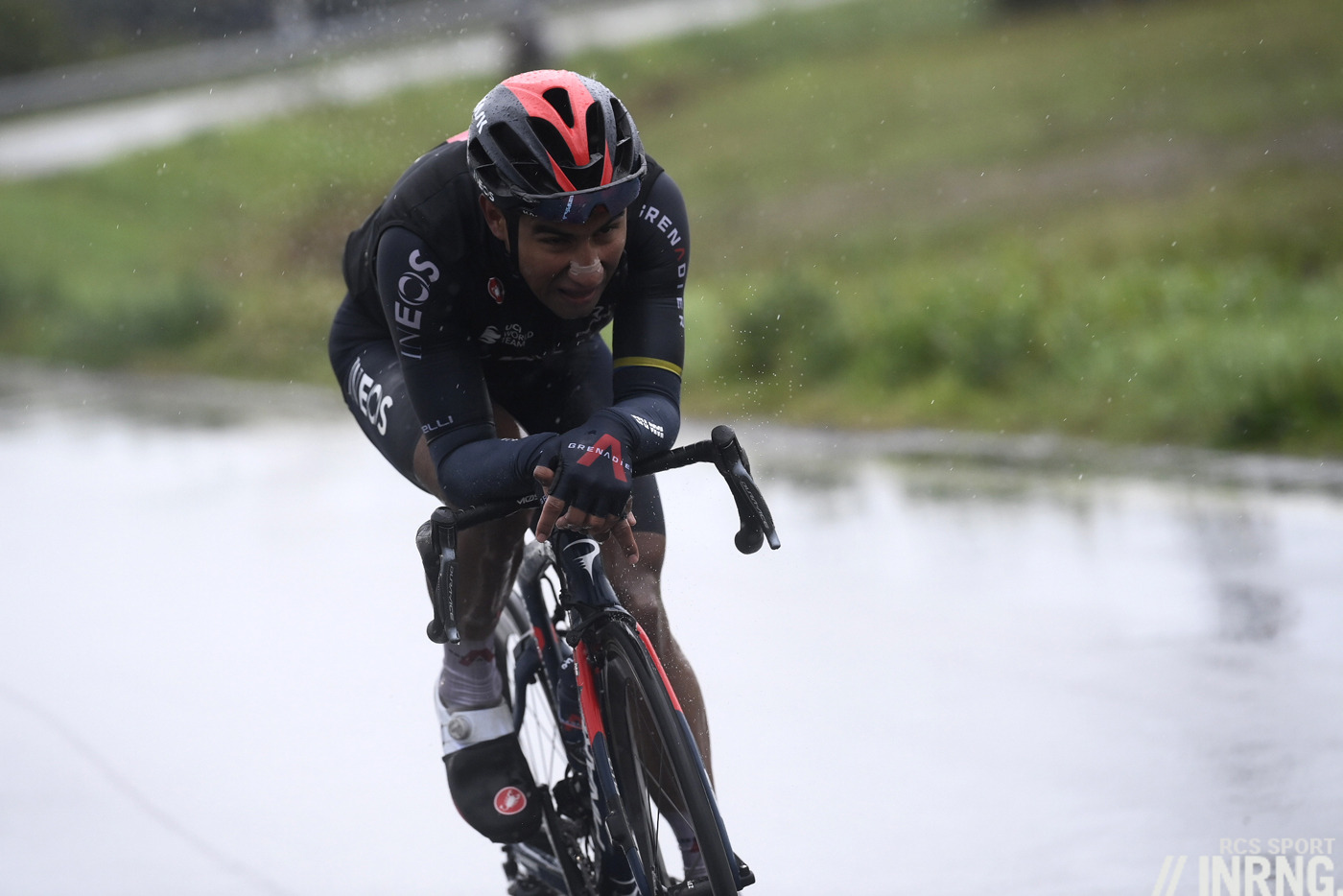 Stage 12 review: just as the Ecudador flag has the rare feature of a depiction of the flag inside of it, one Ecudaorian stage winner can bring another and after Jonathan Caicedo last week, now a stage win for Jhonatan Narvaez. He made the day’s 13-strong breakaway that gained 13 minutes at one point and attacked it with Mark Padun. Things looked to be heading for a duel in Cesenatico until the Ukrainian broke his front wheel, leaving Narvaez to go solo for the win. Padun chased hard and got to within 9 seconds but on a cold, miserable, wet day he cracked and that was that. Not much happened further back, NTT toiled all day but what could Pozzovivo do on the final climb? Even if he attacked, Deceuninck-Quickstep had Masnada and Knox in support for Almeida and remaining 30km were flat and the cold seemed to have numbed everyone.

The Route: 192km and a flat parade across the Po plains. However two sharp climbs await, the first is the Passo Roverello via Roccolo, 4km at over 8% and with some steep sections as it twists up into the Colli Euganei (“Euganean Hills”). For reference in Milan-Sanremo the Cipressa is 5-6%, today’s first climb is harder and the chance for Bora-Hansgrohe to go Vollgas and eject Arnaud Démare. There’s only a short descent before the next climb, this time to the village of Calaone and it’s got a different feel, a direct strip of tarmac uphill and but steep again. From the top there’s just 16km to the finish.

The Finish: a flat run through town on big boulevards but with a left-hand bend, almost a full u-turn with 400m to go but it’s a wide bend rather than a sharp one.

The Contenders: a stage for Peter Sagan, the two climbs are ideal for him and his Borah-Hansgrohe team to eject Arnaud Démare and other sprinters. If anything these climbs might be a touch hard for the Slovak but his team can set a pace to suit, Goldilocks style: not too hot, not too cold.

With Michael Matthews back home, challengers include Fabio Felline (Astana), Andrea Vendrame (Ag2r La Mondiale), Enrico Battaglin (Bahrain-Merida) but they’d all prefer a slightly uphill finish today rather than the flat 15km approach and the dragster finish strip. Davide Ballerini (Deceuninck-Quickstep) has more sprint power but can he cope with the climbs? Also watch Stefano Oldani (Lotto-Soudal), the Italian neo-pro is riding his first Giro but quietly contesting sprints and he’s a lighter build.