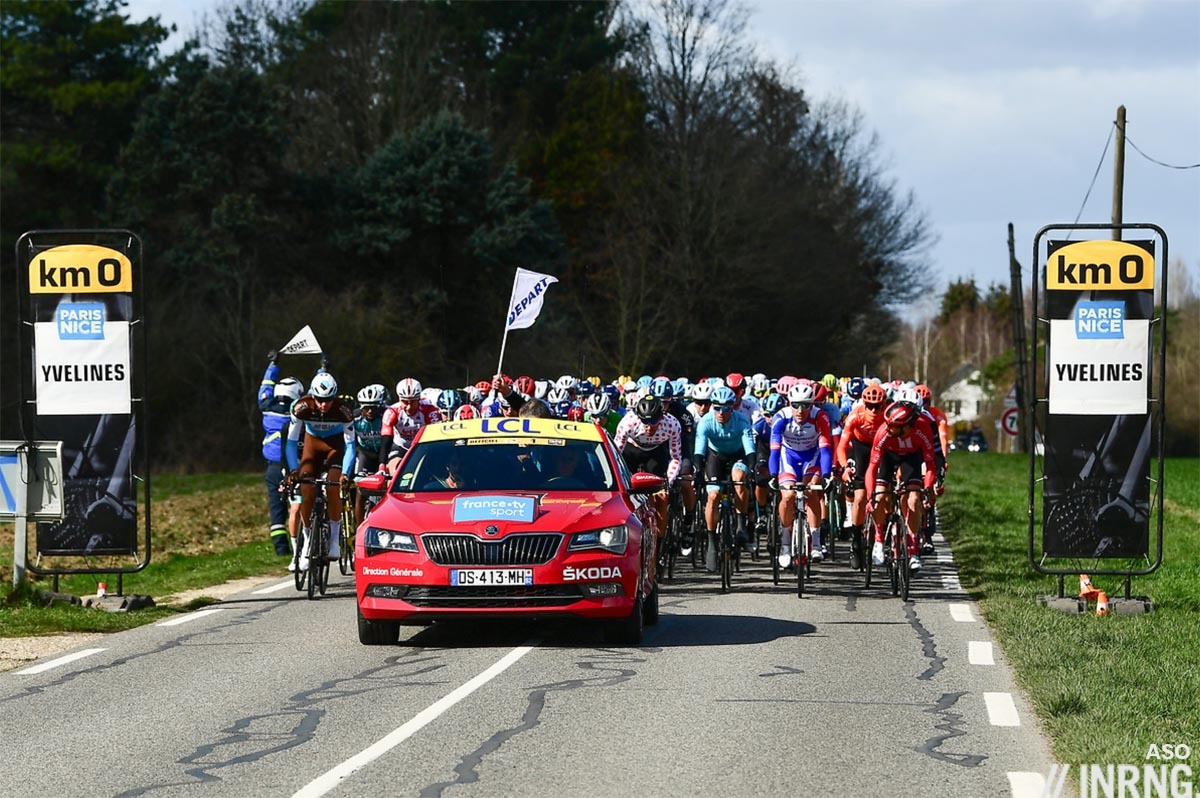 Where to begin? Just outside Paris but with the spread of the coronavirus, one question is whether the race will reach Nice next weekend is as valid as who will win.

The sporting aspect is interesting with a revised startsheet, fewer of the large teams to control the race and the weather forecast says it’ll be windy for the opening stages.

As of Friday there were 3,858 reported cases of the virus in Italy and 423 in France, and important regional differences within countries, which partly explains why different countries are taking different measures in different time. But these numbers rise inexorably and who knows where things are next week? The upshot is Paris-Nice goes ahead but several teams have announced they won’t be racing anywhere in the coming weeks. Other squads have come in at the last minute to race Paris-Nice and teams can field eight riders, one more than the regulation seven, both to make the field bigger but also to allow more riders to race given the entire Italian calendar has been binned.

Some riders slated for Tirreno-Adriatico have switched to Paris-Nice and teams juggle stage racing ambitions this week with the need to ensure their classics contenders get a week’s workout in their legs too. It all makes for a strange week ahead and that’s before we get to the hygiene measures where riders are encouraged not to pose for selfies with spectators, to shake hands with each other, there will be no pre-stage interviews on the podium, no post stage chats with journalists and the organisers have laid on an extra ambulance to follow the race in case anyone has feverish symptoms. 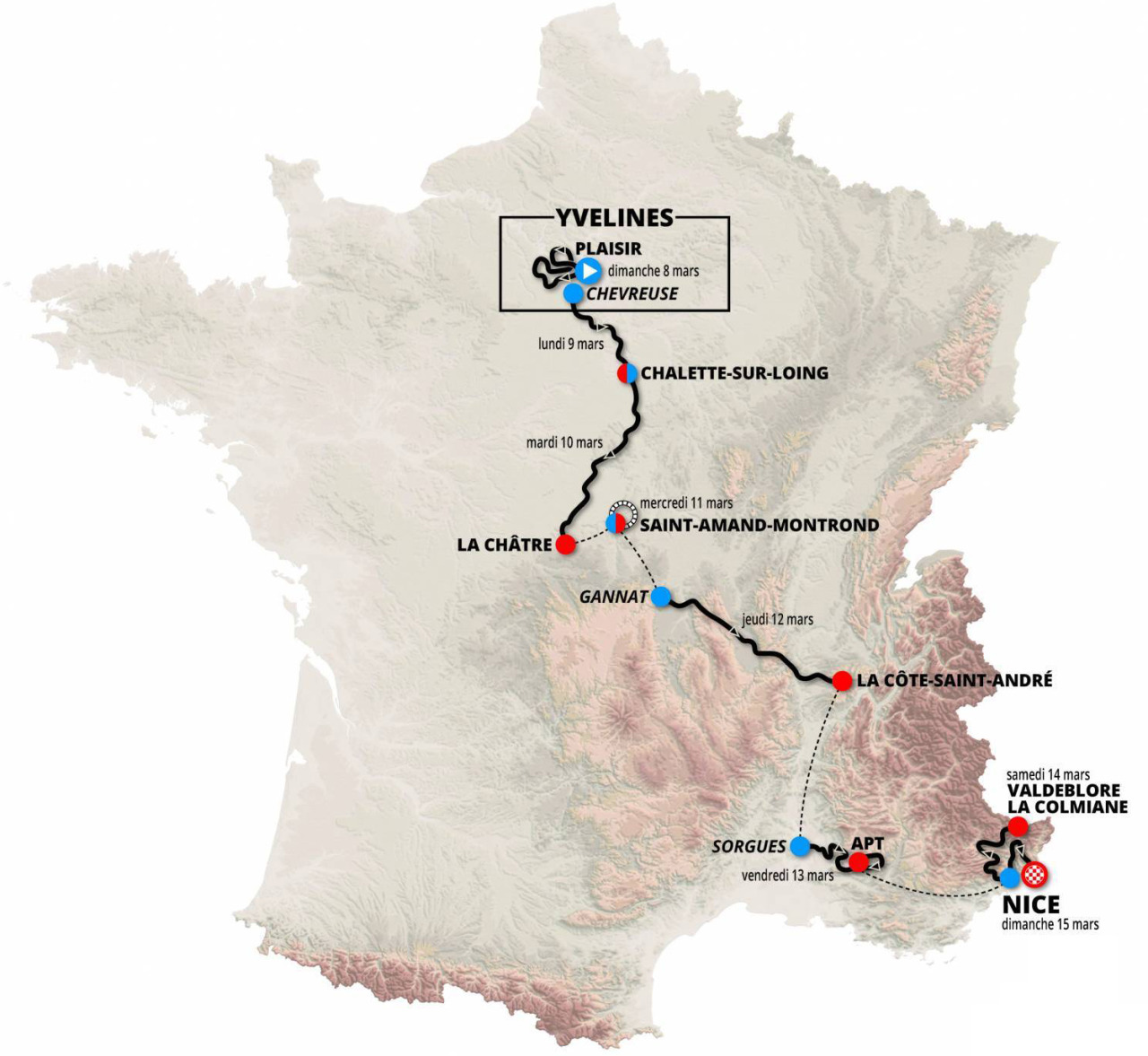 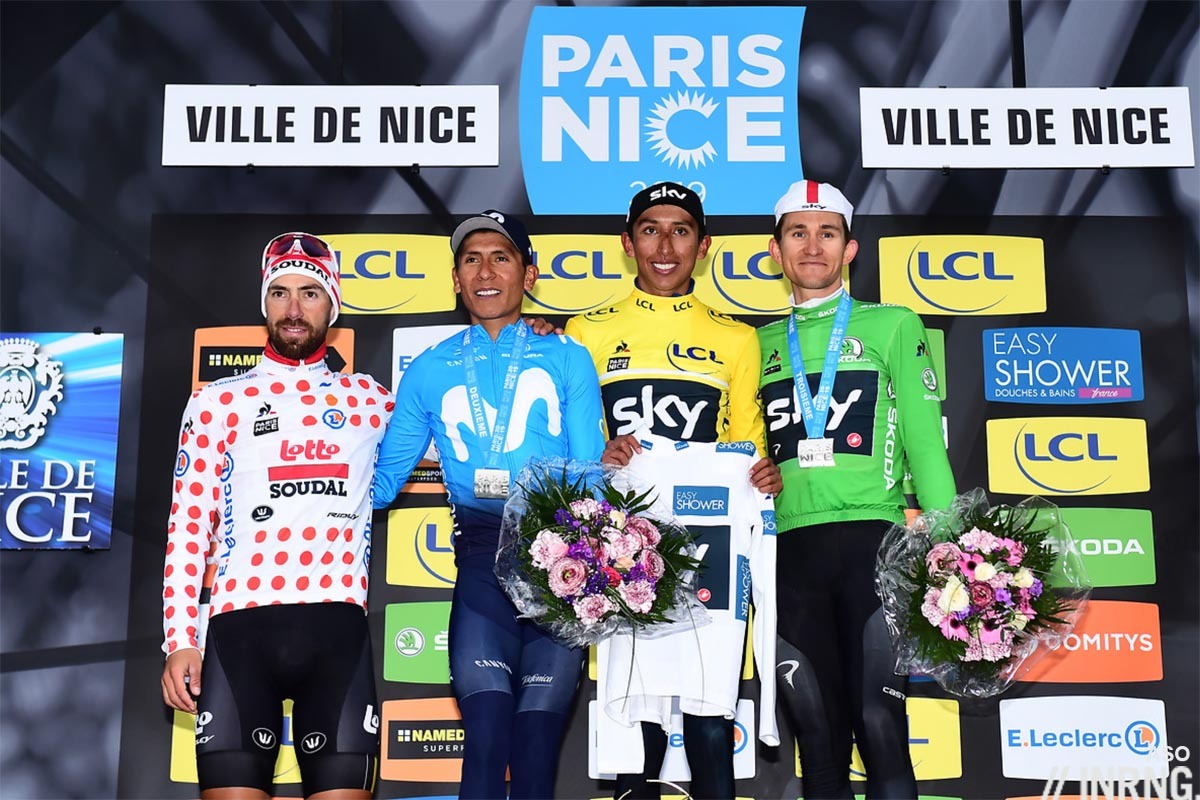 Nairo Quintana (Arkéa-Samsic) is the obvious pick. He’s been in great form, his win on Mont Ventoux last month was notable for the time he put into everyone else. Similarly he was strong again on the Col d’Eze a week later where again he just rode away from everyone. Now he finds a course with a short time trial and a big summit finish on the kind of long, grinding climb that suits him. Still his new team is untested for the flat stages and half the squad is for Nacer Bouhanni and the sprint stages plus the worry is his form might start to wane. Warren Barguil is coming into good form too.

Sergio Higuita (EF Pro Cycling) is a form pick for the way he won the Tour Colombia but it’s one thing to win in front of a home crowd in the middle of the Colombian summer, another to do it on a wet Wednesday in Saint-Amond. Coming down from altitude isn’t easy for some, nor is adjusting to cold temperatures but Dani Martinez managed it last year. Higuita is useful for the time trial and climbs well, plus he can mop up time bonuses too with his punchy finishes. Michael Woods and Tejay van Garderen bring support and are outsiders too.

Dylan Teuns (Bahrain-McLaren) isn’t the world’s best climber nor the best in a time trial but right now he’s on form and can hold his own in both disciplines and he can sprint for stage wins to help score time bonuses. 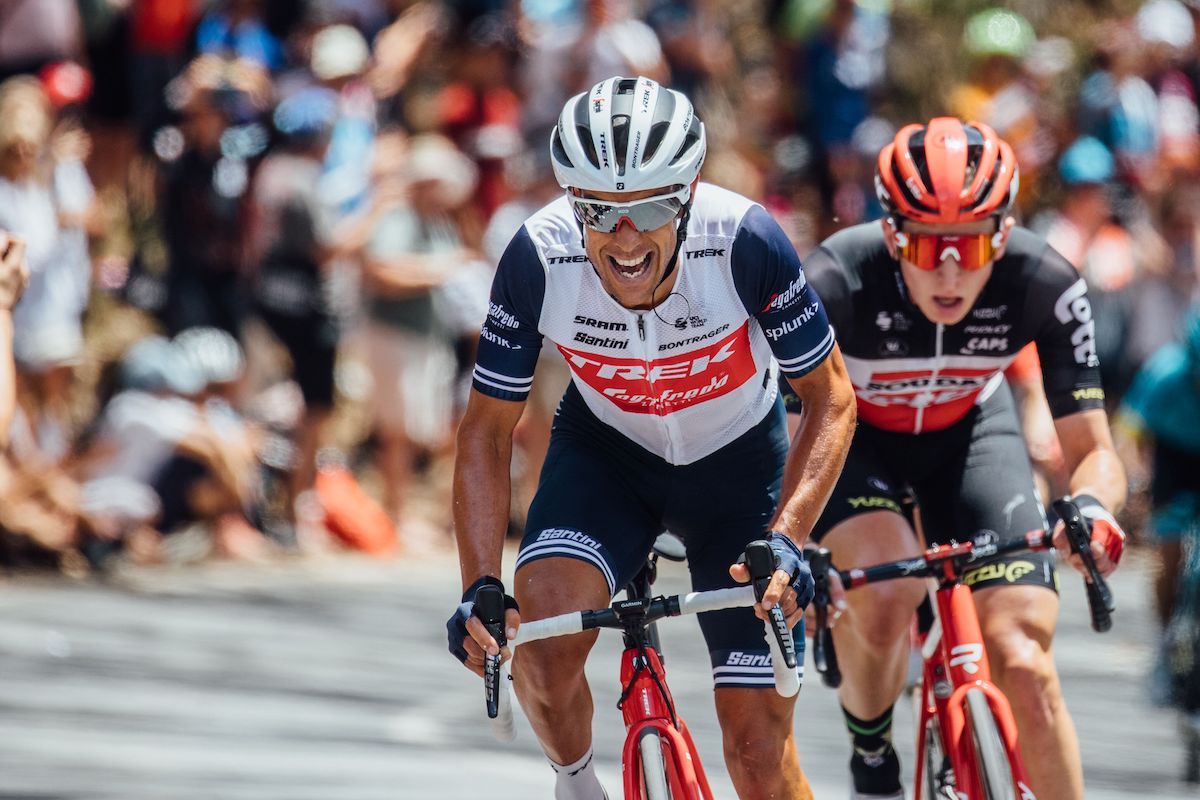 Trek-Segafredo bring a strong tandem of Richie Porte and Vincenzo Nibali. Nibali was all over the Ardèche and Drôme classics last weekend, launching moves like a junior who’d downed their first caffeine gel and the racing was all the better for it. He might be more measured here but the course isn’t one he’d draw, there are few ambush points and descents to scare rivals. Instead Porte looks more suited to the route, the time trial and steady combo is made for him and his performance on Mont Faron last month suggests he’s in shape, but he loses a chainring in the ratings below for the risks that the wheels come off before he gets to the time trial, indeed the team say Porte will be targeting stage wins. 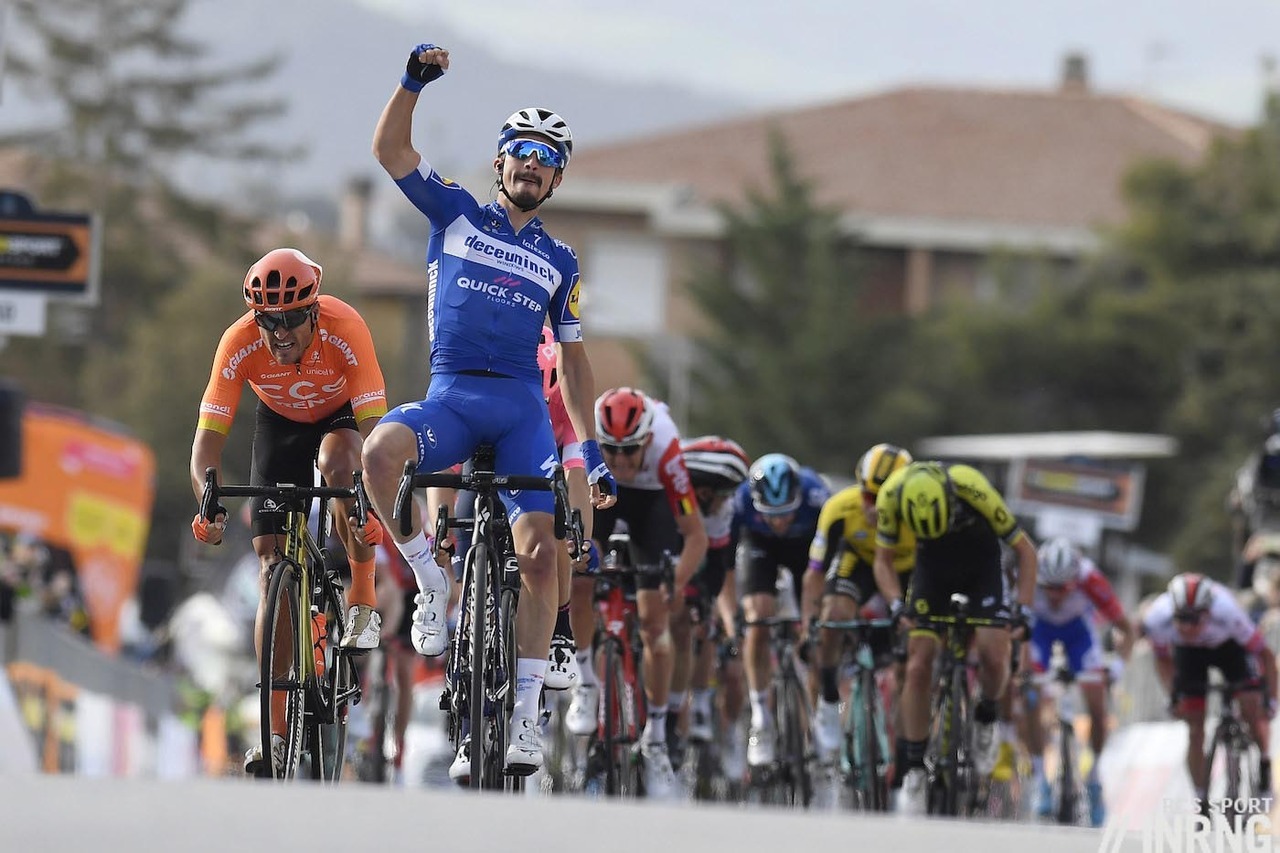 Julian Alaphilippe (Deceuninck-Quickstep) could win Paris-Nice one day but he’s been short of form and on antibiotics recently so even a “home” time trial in Saint-Amond (the town where he was born but he grew up elsewhere and lives in Andorra) might provide plenty of motivation only for him to find the legs are not there.

Thibaut Pinot (Groupama-FDJ) has been on the receiving end so far this season and while the early season races were not big goals and there’s been time to hone form since it doesn’t bode so well. Still the terrain suits and he gets a team of bodyguards for the flat stages.

Bora-Hansgrohe have a trio in Max Schachmann, Felix Großschartner and Patrick Konrad but how to win a big stage race? Schachmann is the punchiest of the trio and should be worth watching but might find the long climb to La Colmiane too long. 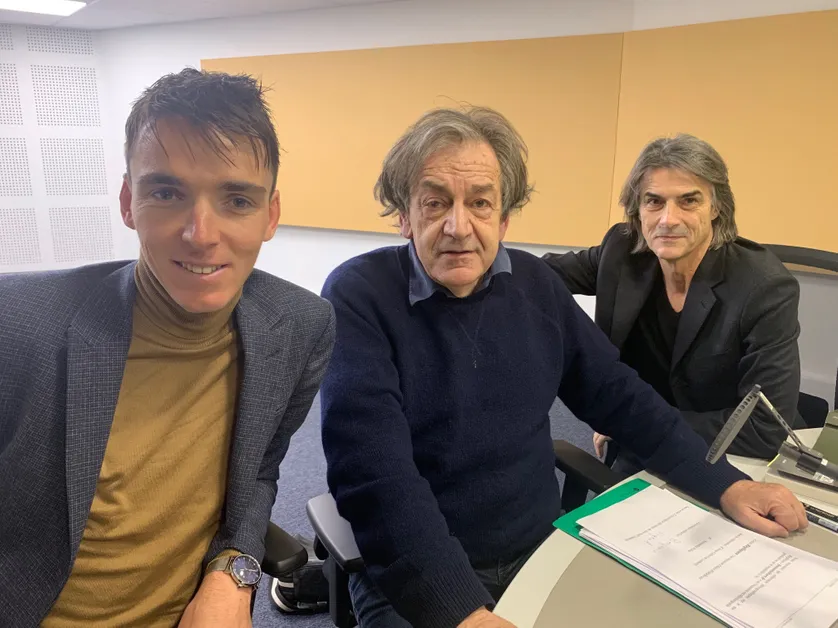 Romain Bardet (Ag2r La Mondiale, pictured at France Culture for a 51 minute exploration of what being a champion means with philosopher Alain Finkielkraut) has never got on well in this race and became a father the other day so he and his press officers are downplaying his chances but he looked strong last week in the Drôme where he was working for team mates. Team mate Pierre Latour can be an exciting rider on a good day and if the race is hard to control he could surprise but a World Tour stage race is a big ask.

Among the outsiders Guillaume Martin (Cofidis) is a punchy climber but allergic to time trials, Ben O’Connor (NTT) has found winning ways after a blank year but hard to see him win overall. Sunweb’s Tiesj Benoot will probably find La Colmiane too much.