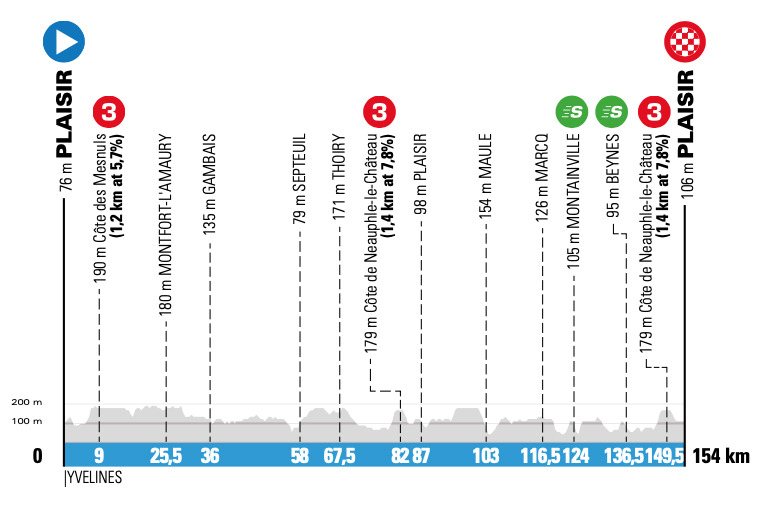 A series of loops in the countryside including a narrow cobbled climb, the opening stage is more than a dash to the finish line for a bunch sprint.

The Route: 154km with loops in the countryside west of Paris starting and finishing in a town called Plaisir, “pleasure”. The profile says plenty, it’s not hilly but there are a few sharp climbs along the way and plenty of narrow roads and pinch-points, the kind of course where it pays to be near the front to avoid the constant concertina effect on the peloton. The early climb to Mesnuls allows a breakaway to aim for the mountains jersey, especially if they can stay away for the climb into Neauphle-le-Château. This one is climbed twice and the hardest part of the course, a reported 1.4km at 7.8% (versus a measured 6.7%) but either way it’s cobbled with 400m at 9%. The pavé is ok – think Nokereberg – but it’s narrow.

The Finish: they tackle the climb to Neauphle-le-Château a second time and positioning is all-important as it’s only 5km from the climb to the finish and a narrow climb. Once out of Neauphle it’s a wider road gradually downhill before a sharp turn with 500m to go that doubles back.

The Contenders: tough circuits, difficult conditions and a sprint at the end? Peter Sagan (Bora-Hansgrohe) is the obvious pick only he’s not won anything yet this year. If he does win it’d be a return to his career debut in 2010 when he took his first pro win on a stage of Paris-Nice to Aurillac.

Michael Matthews (Team Sunweb) can do a lot of what Sagan does and arguably climbs and time trials better but in crosswinds and a bunch sprint the Slovak has the edge. Plus this is Matthews’ season debut, while Cees Bol is an option for the sprint too.

Sam Bennett is Deceuninck-Quickstep’s sprinter but seems a touch hesitant with his new team, still he’s versatile and can cope with crosswinds and sharp climbs too. Nacer Bouhanni (Arkéa-Samsic) has reputation that often precedes him but he’s more than a dragstrip sprinter. A similar story for Elia Viviani (Cofidis) too.

Lotto-Soudal bring Caleb Ewan, John Degenkolb and Philippe Gilbert and so have several bases covered as long as they can cooperate.

Giacomo Nizzolo (NTT) is in form, he lost out in the GP Samyn perhaps because he was making too many moves while Hugo Hofstetter (Israel) sat tight to play the sprint card. Bryan Coquard (B&B Hotels-Vital Concept) is in good shape but is in his seventh season and still to win at World Tour level.

Otherwise take your pick from the cobbled classics contenders in the field, several names have a chance if they and their teams can enliven the race towards the finish or crack the sprint trains on the final climb. The problem here is the final climb is narrow but it’s not steep at 9%, it’ll be hard to get a good enough gap to stay clear but hopefully it’s enough to make plenty try.

Weather: grey, overcast and a chance of rain, a top temperature of 15°C. The wind will blow from the west at 15km/h which isn’t strong enough to cut up the peloton but means a tailwind over the final climb to the finish.

TV: the finish is forecast for 2.55pm Euro time. It should be available on the same channel you watch the Tour de France and/or Eurosport.