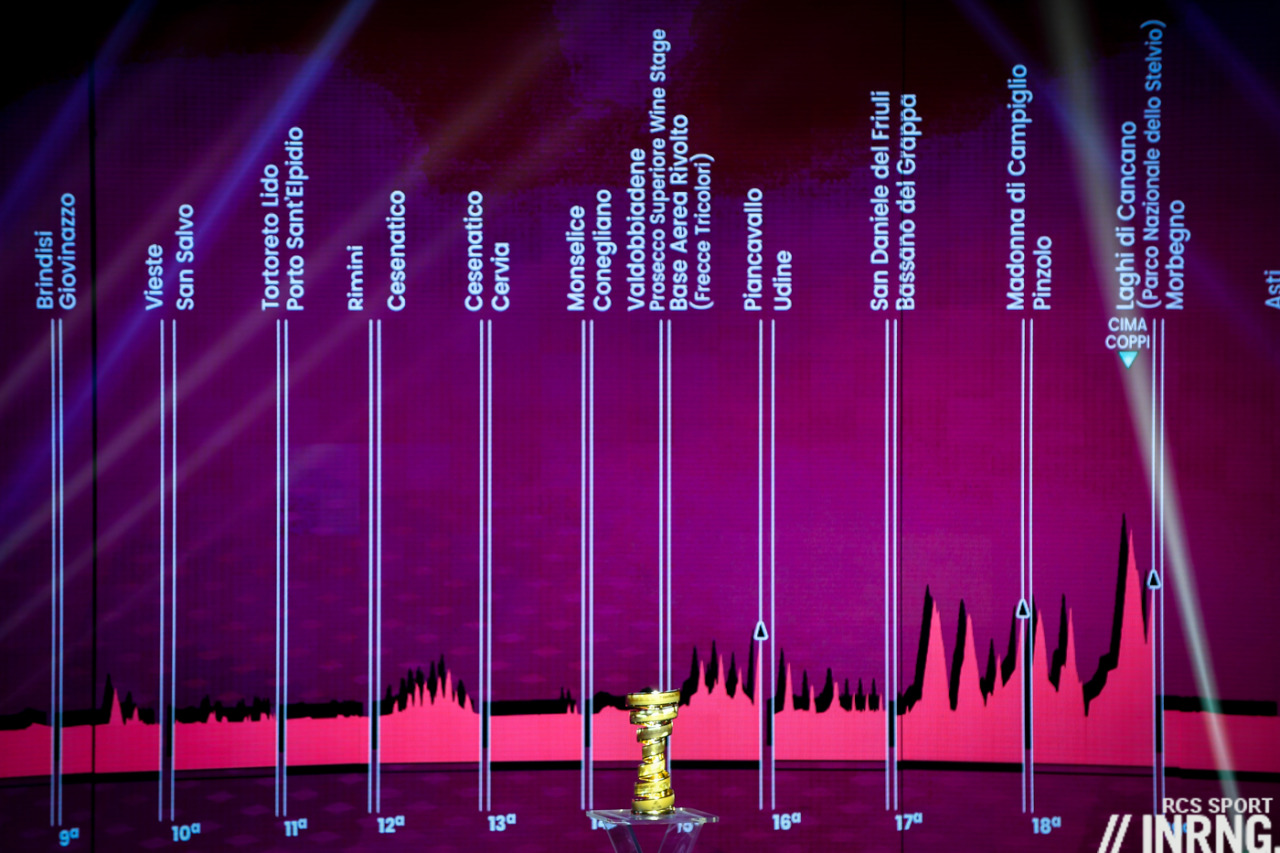 A stage-by-stage look at the 2020 Giro d’Italia route. 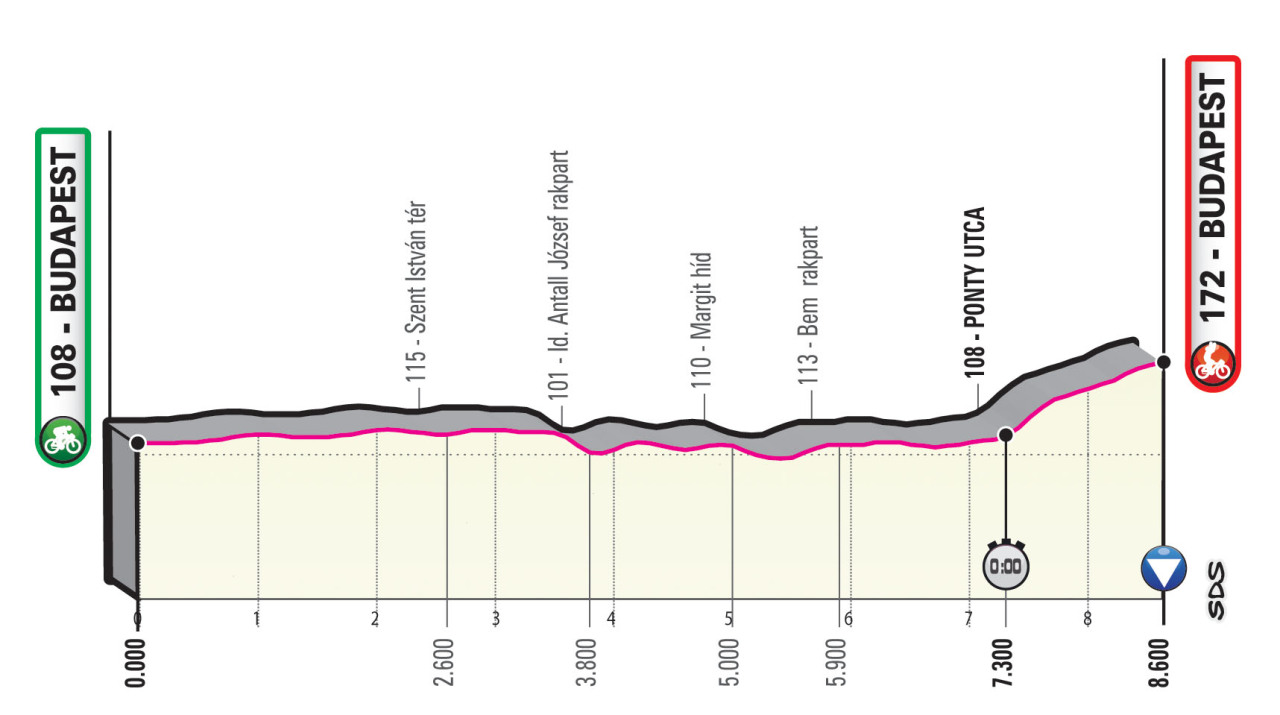 The start is in Hungary with the genesis coming in part from Prime Minister Viktor Orbán’s dentist, a keen cyclist and triathlete. Stage 1 is a prologue on big boulevards and a climb up the Buda castle hill to finish.

Stages 2 and 3 are flat and should be for the sprinters.

Stage 4 sees the race fly to Sicily with a direct transfer, there’s no rest day in between the grande partenza and the return to Italy so we get a short stage to ease matters. With the final four kilometres in Agrigento rising at 5% it’s an early test for Peter Sagan who has announced he will ride. 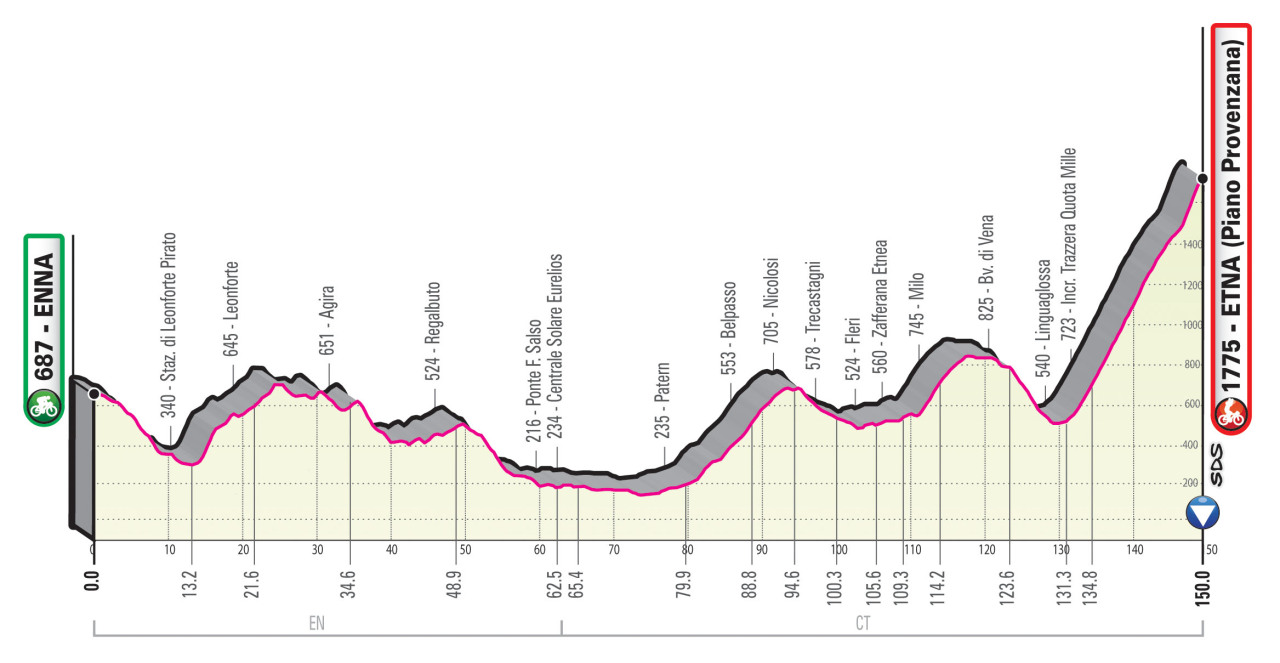 Stage 5 and the first summit finish, on Mount Etna. This is the climb from Lingualossa and then the turning for the Piano Provenzana ski area, of which the final three kilometres are a selective 9%. It’s hard but there was talk of going higher and a gravel section but this sets the theme for 2020, they have scaled things back a bit, and opted for a traditional tarmac finish which for this early in the race is plenty already. 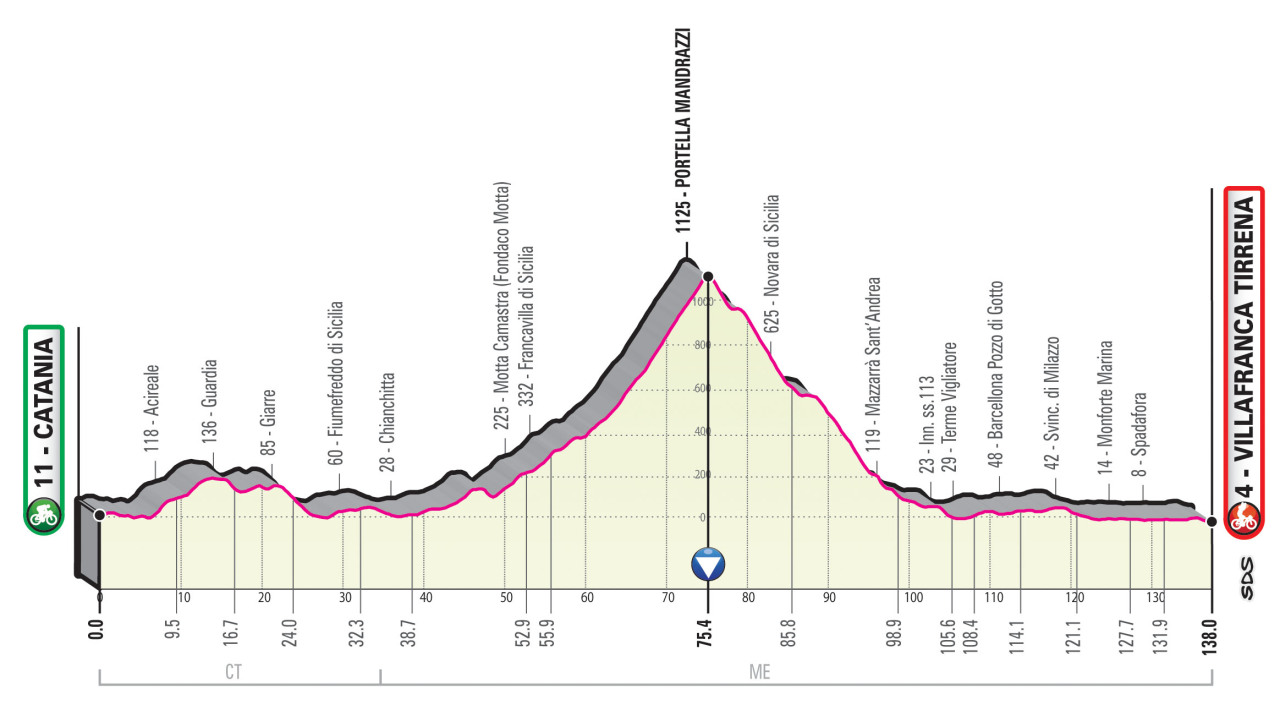 Stage 6 and Vincenzo Nibali’s old training roads via the Portella Mandrazzi, it dominates the profile but it won’t dominate the race, it’s mainly 4-5% on a big road, perhaps a chance for some teams to fatigue rival sprinters but otherwise it’s a short 138km dash. 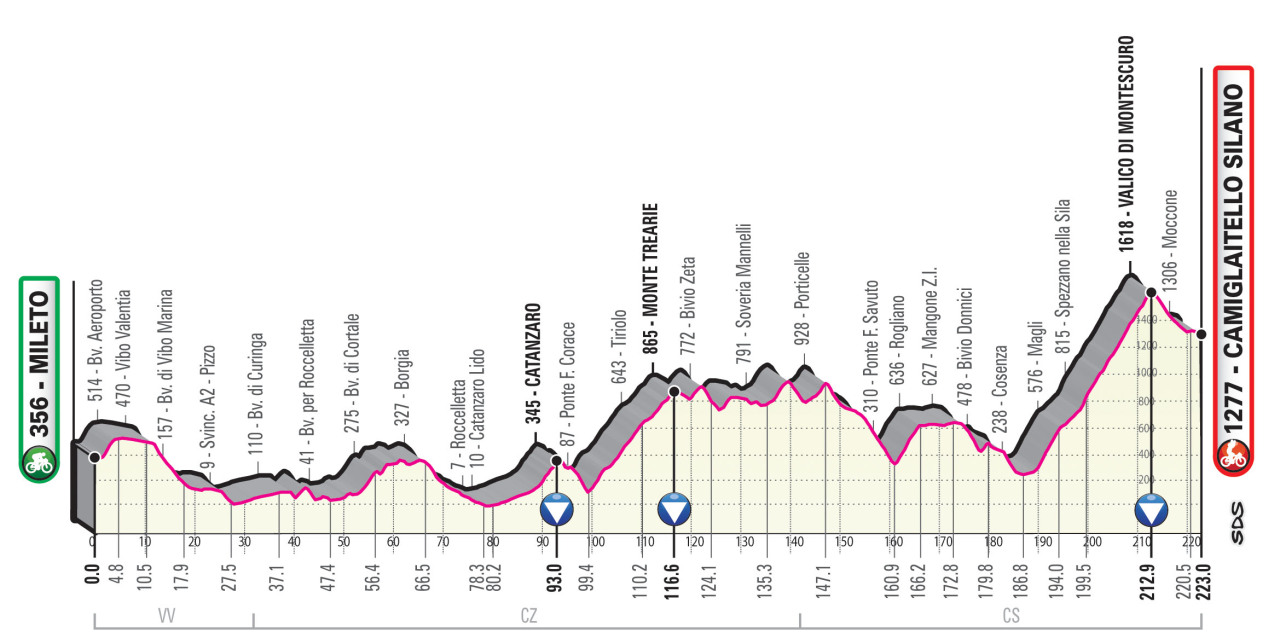 Stage 7 is a long day in the saddle with undulating roads leading to Monte Scuro and the climb which at 6% goes on for long enough to thin the peloton down before a regular descent to the finish.

Stage 8 goes up the coast past beach after beach until Brindisi and a likely sprint for this Saturday stage.

Stage 9 looks like another for the sprinters, only that tiny bump on the profile at the end marked Via Saragat is actually a steep wall and should spice up the finish and leave some sprinters behind.

Stage 10 and a route with inevitable comparisons to Milan-Sanremo thanks to the coastal procession followed by a loop into the hills around Tortoreto but it’s a touch harder thanks to the rough roads of the Marche and more climbing in the finish.

Stage 11 and one for the sprinters.

Stage 12 might be more familiar to amateurs than the pros as it borrows from the Nove Colli gran fondo, and it’s a hard day out, a good day for the breakaway but potential ambush country too. With the finish in Cesenatico there’s always a chance to exhume Marco Pantani’s myth once again.

Stage 13 is completely flat – the highest elevation comes from bridges over the autostrada – until they reach the finish and then head out for quick tour of the Colli Euganei with two serious climbs. 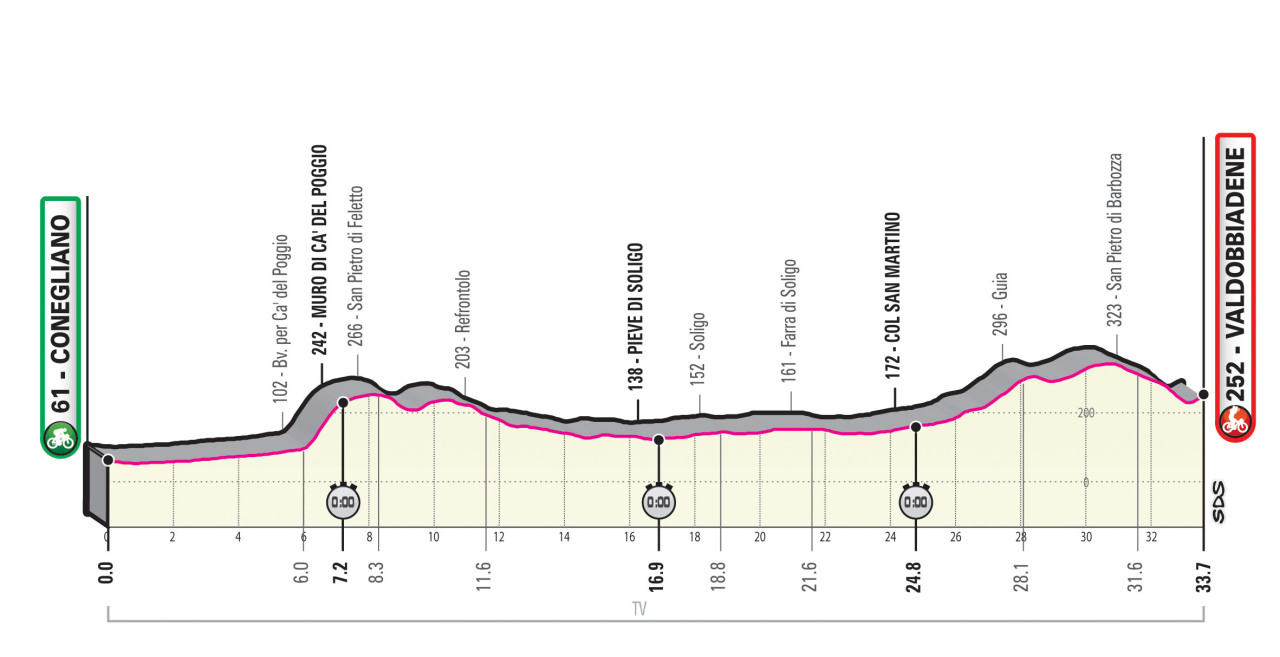 Stage 14 is a 33.7km time trial and the likely “wine stage” as it tours the Prosecco vineyards. Riders will need some fizz for the Ca’ del Poggio, a wall-like climb that has featured in the Giro and other local races too. 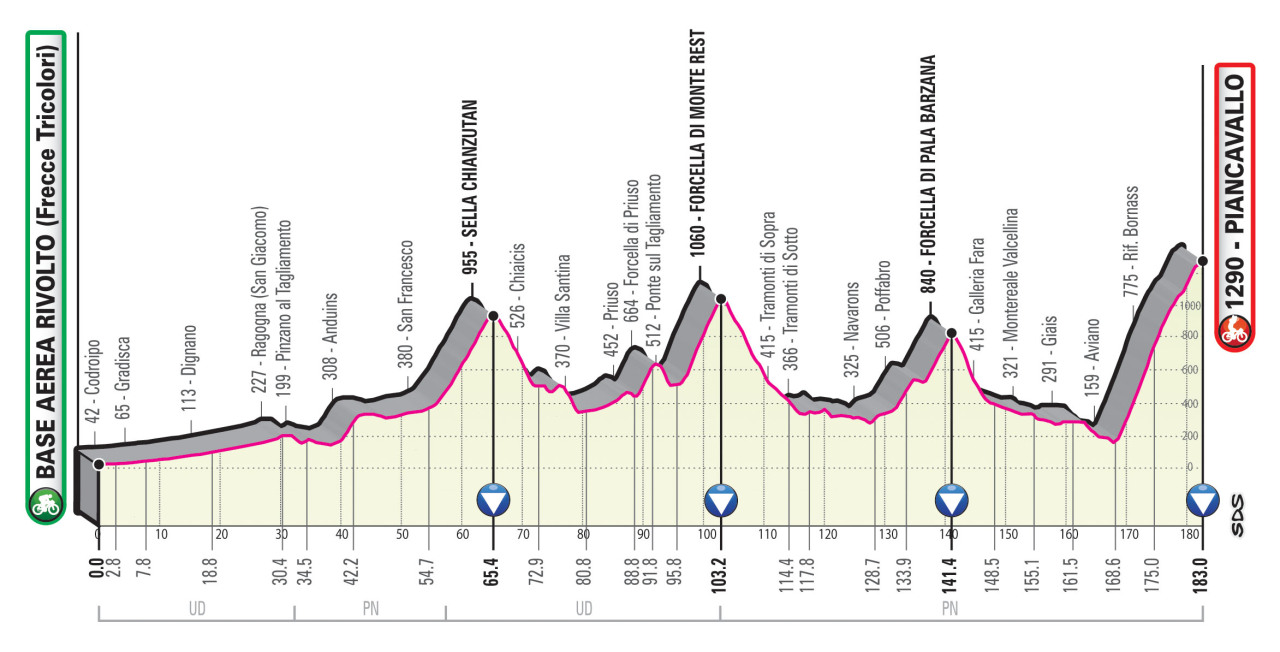 Stage 15 and it’s into the mountains with a series of climbs, it’s Alpine but often 6-7% and the hardest part of the Sella Chianzutan is the stone paving and the tunnels. The finish featured in 2017 when Mikel Landa won the stage and Tom Dumoulin lost contact with the main group of contenders on the early slopes but paced himself to limit his losses. Stage 16 features a finishing circuit with a very tough climb, 3km at 10% and with some parts over 15%, hairpins and all on a narrow woodland road. The descent isn’t so technical but it’s fast and awkward. 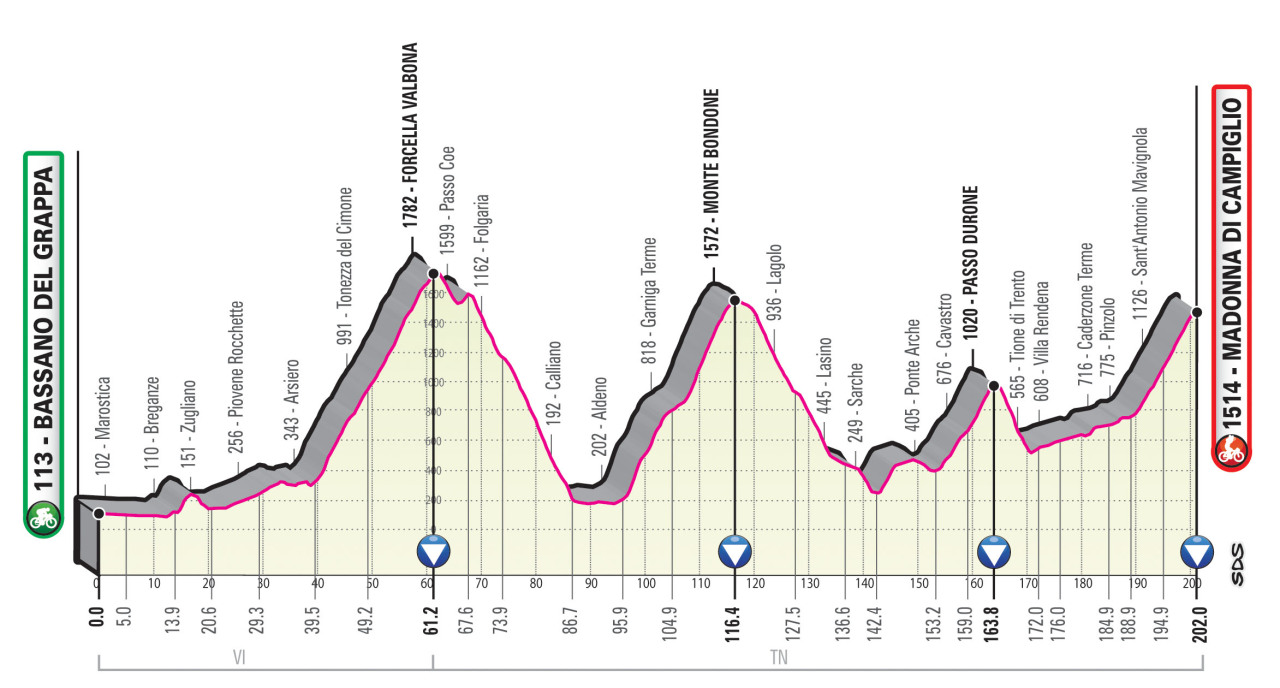 Stage 17 and some classic climbs with Monte Bondone the hardest of the day with some sustained 10% sections and famous for Charly Gaul’s triumph. Madonna di Campiglio is more infamous as the point where Marco Pantani was ejected from the Giro, as for the climb it’s 6.4% for 10km, nothing fierce. 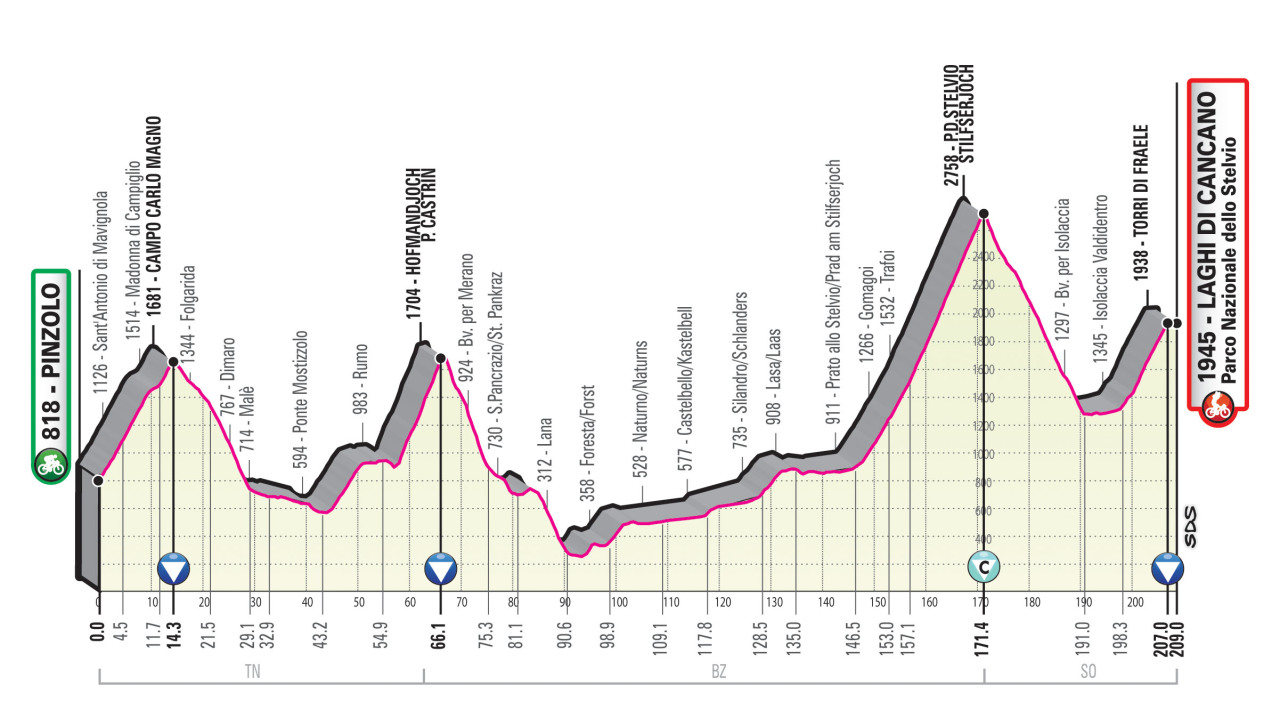 Stage 18 and Pinzolo will be decked out with rollers as riders warm up for the Carlo Magno but it’s the Stelvio that dominates the stage, the high point of the race and climbed via the Trafoi side, the more scenic ascent. The final climb is a turning early on the Foscagno pass to Livigno and the riders sashay up 17 hairpins in tight succession but it’s wide and built so trucks could build and service the giant Cacano dam.

Stage 19 could be part sprint stage, part recovery day to help ensure fresh legs to liven up the next day but it’s a long 251km parade across the Po plains to the foot of the Alps. 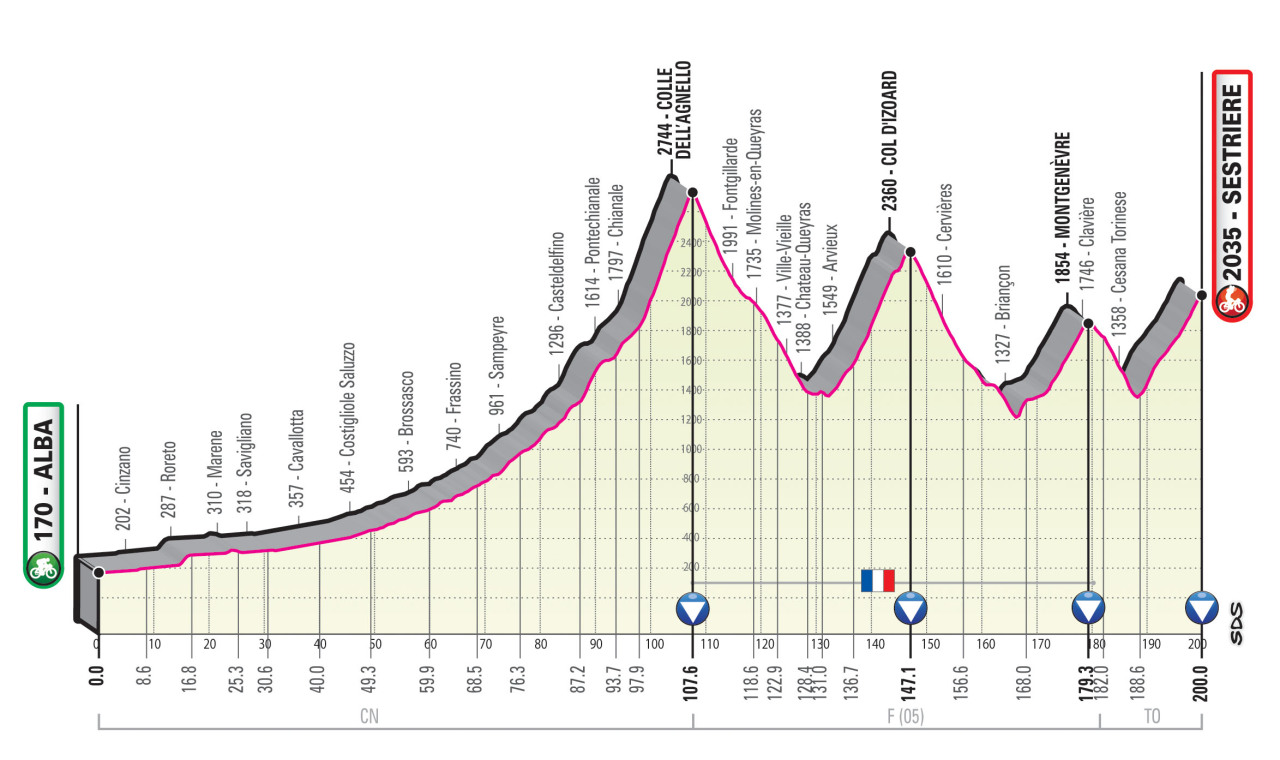 Stage 20 and a huge day in the mountains, an Alpine bonanza featuring some of Europe’s highest passes. First the Agnello where Steven Kruijswijk collided with a snow bank and lost his chances, then it’s into France for Izoard, these are the two hardest climbs of the day. The Col de Montgenèvre was long the main crossing point between France and Italy because of the relatively low altitude and the kind of road trucks used to take. Sestriere is a ski station access road, often 5-6% but by then the hope is that riders are so tired that it’s enough to make the difference. 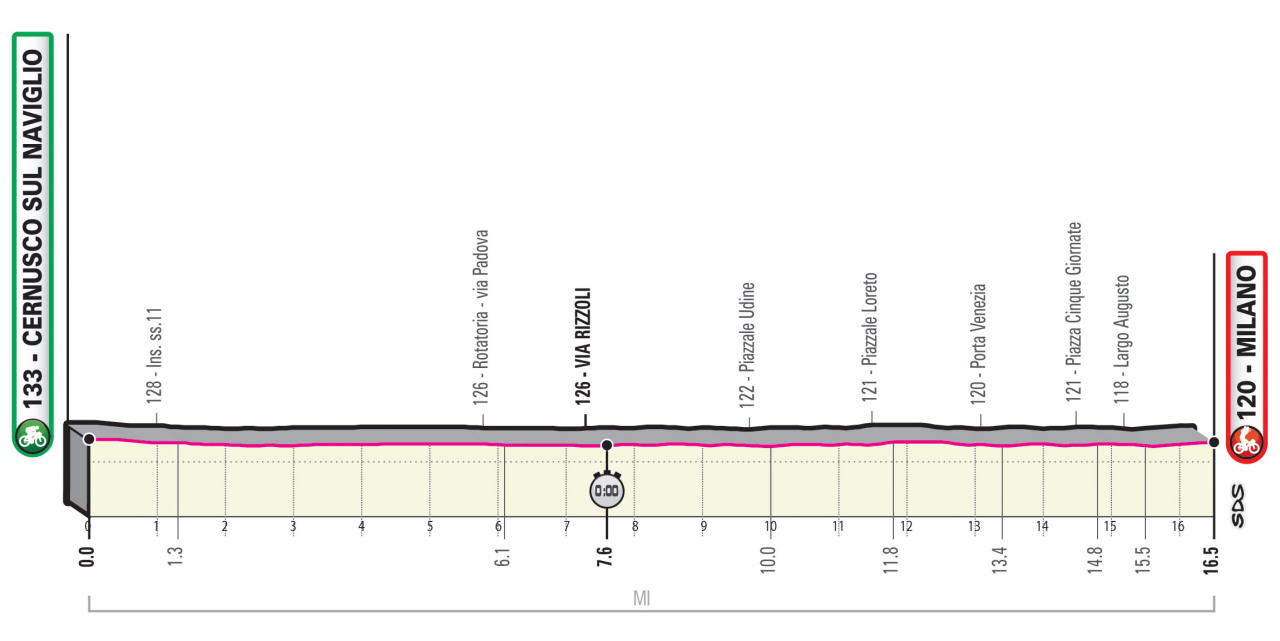 Stage 21 is a 16.5km time trial into Milan and hopefully with two contests, first the stage win for the pure TT specialists who will have hauled themselves over the Alps for this flat course and then the general classification contenders where some can hope to take back 30-45 seconds on rivals. 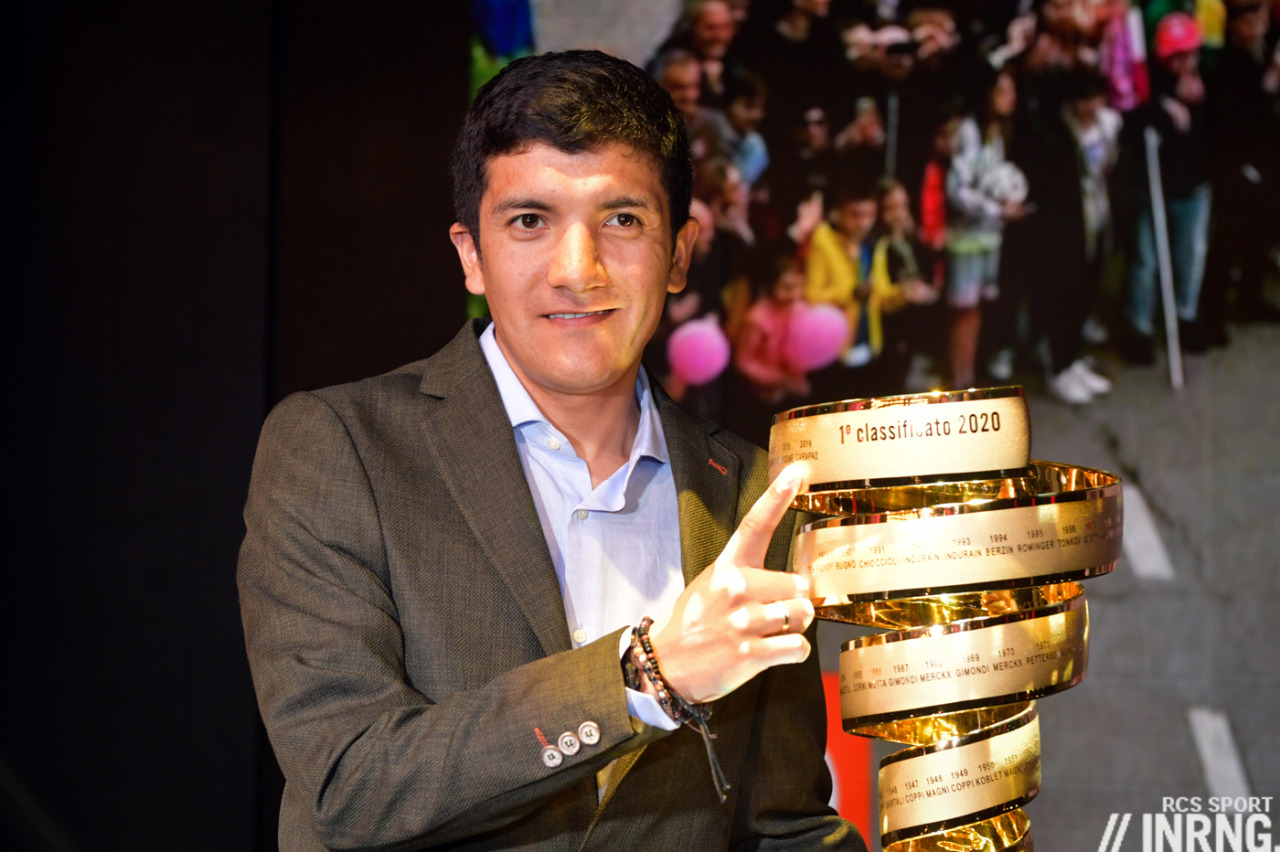 Overall thoughts
A conservative Giro, there’s no gravel, goat paths or gimmicks. Instead this route would not look out of place 15, 20 or 30 years ago, only the time trial distances have shrunk but the other days feature plenty of 200km+ routes including in the mountains and so it’s a bit of a blank canvas, take your pick from any vintage. As ever RCS will have Plan B versions for the high mountains in case of adverse weather but the Giro is a week later than the past and  this slot is just when the passes tend to open so it can make all the difference. Once in Sicily it’s got some lively opening stages including an early summit finish in Etna. Stage 12 dips into the Apennines but the Giro doesn’t go big on this mountain range. The Stage 14 TT is significant to the race and then comes the final week in the Alps where Stage 16 could surprise and if not the Agnello, Izoard and Stelvio will pick the winner. Much like the 2019 route the hardest climbs are often mid-stage rather than the summit finish.

Who will win? There’s only so much crystal-ball gazing to be done now, it’s more an exercise in projecting past winter into the start of summer than predicting the winner. We don’t know who is riding yet, for Ineos alone there’s a flowchart of options depending on Chris Froome’s recovery but all the same new recruit Richard Carapaz has a good chance again, ditto Geraint Thomas. Tom Dumoulin’s been out of action for a long time now, if he can recover then does he return to the Giro or have Jumbo hired him for big publicity in July? Vincenzo Nibali is bound to start, he’s turning 35 soon and could shape the race again and has an eye on the Olympics. 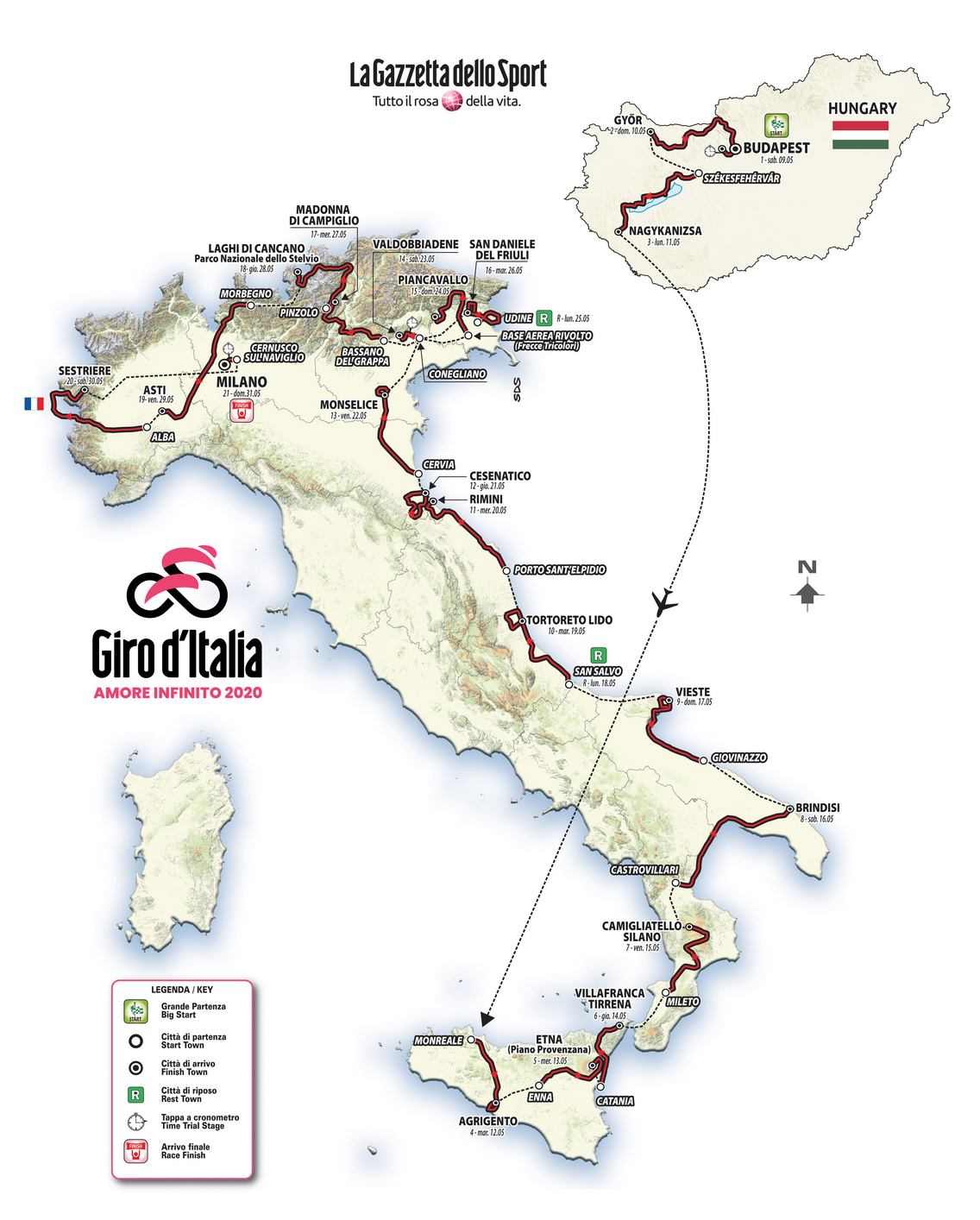