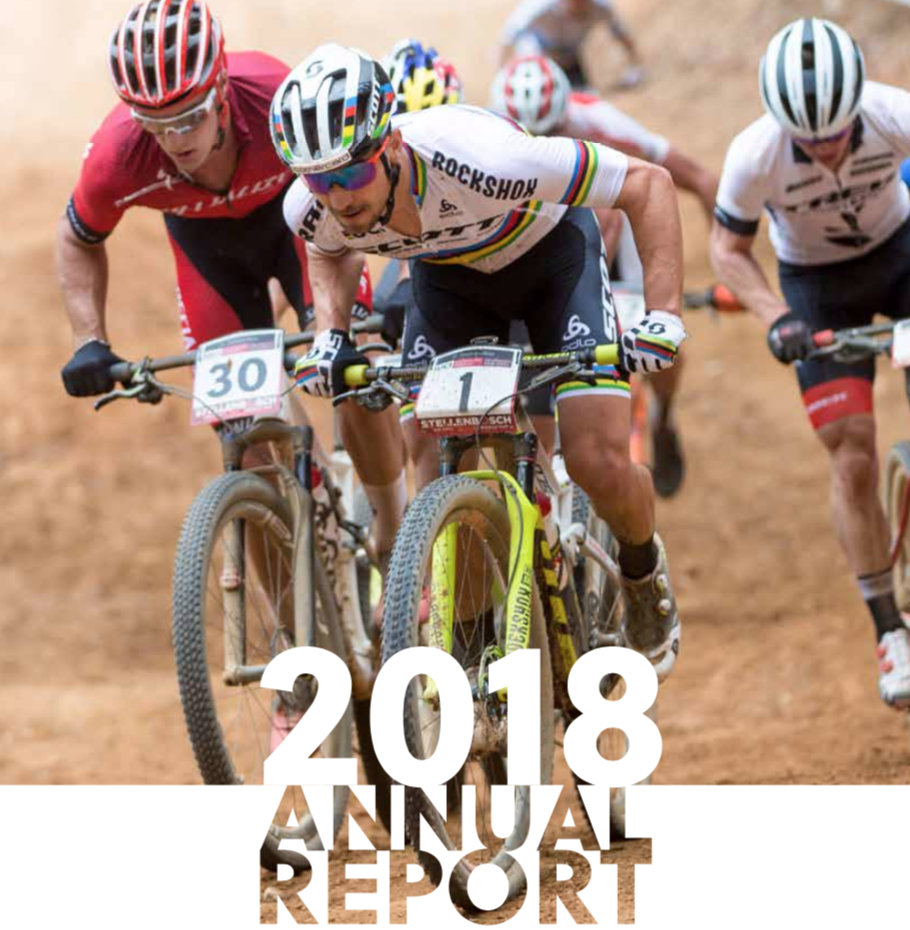 The annual look at the UCI’s finances, a chance to follow the money behind the governing body. You can download the full report from the UCI website or scan the summary below. The UCI published the report in July but amid a thrilling Tour de France it wasn’t required reading. It’s not fascinating today either but as ever its worth checking in on the sport’s administration and more.

As a reminder the UCI is cycling’s governing body and it has eight primary activities: road, track, mountain, BMX, para-cycling, cyclo-cross, indoor (cycle polo, gymnastics) and trials… the last one being the test of balance rather than the court room. The UCI sets the rules for the sport but “governing body” implies a degree of authority it doesn’t always possess, especially in men’s road cycling where it often arbitrates between competing interests. All the numbers here are in Swiss Francs (CHF) because the governing body is based in Aigle, Switzerland – inside a small building tucked behind a retail park – and the exchange rate is mentioned below but for shorthand you can equate one franc to one US dollar.

The headline figure for 2018 is a net loss of six million francs, a rare event for the UCI and explained by three factors: new President David Lappartient’s election pledge to spend on the development of cycling around the world, an accounting change for the money from the Olympic Games every four years and some investment losses on the UCI’s reserves. This “triple whammy”, the term used in the UCI’s report, helped deliver a loss of CHF 7.3 million for 2018 and gobbled up over five million from the UCI’s balance sheet.

The UCI is a non-profit sports body and so gets tax perks in Switzerland for this, the idea is it should aim to balance its books each year and any surplus it makes goes into its reserves (as opposed to being paid out, say, in dividends) and in the event of a loss the reserves can be drawn on.

The charts here show where the UCI’s money comes from in terms of type, sector and discipline for 2018. The notes explain “Hosting fees were almost flat year-on-year but we expect to see a fall in 2019 due to reduced fees for the UCI Road and Track Cycling World Championships” which reads as if both Yorkshire and Pruszków are not paying as much as usual but this is not clear, later notes mention the Bergen worlds financial fiasco is still ongoing with bankruptcy proceedings continuing for the organisation committee and the Norwegian federation is still partially liable for the CHF 1.1 million debt and the matter is unresolved. Now the UCI have signed up several cities recently to host future editions of the worlds (2020: Aigle and Martigny in Switzerland, 2021 in Flanders, 2022 in Wollongong, Australia and Glasgow, Scotland for the multidisciplinary 2023 Worlds) but the rates are unknown. As ever road cycling is a big deal for the UCI but in 2018 it accounted for 50% of the UCI’s revenue when it’s often much higher. 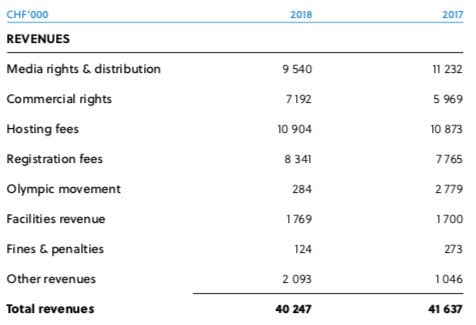 In the statement above you can see the revenue for the UCI for 2018, the big change is the money from the “Olympic movement”. The Olympics pay out money to the relevant sports governing bodies and until 2018 the UCI would divide up the lump sum it got from the IOC by four and drip this across the four years between each of the Olympic games. Now the accounting policy has changed and the money is booked once rather than smoothed across the four year cycle. Fundamentally it doesn’t change much but just helps explain some of the changes for 2018. As you can see “hosting fees” are the UCI’s biggest single earner where the governing body charges venues for the rights to hold the worlds and other events like World Cups and so on and the road worlds make up most of this. 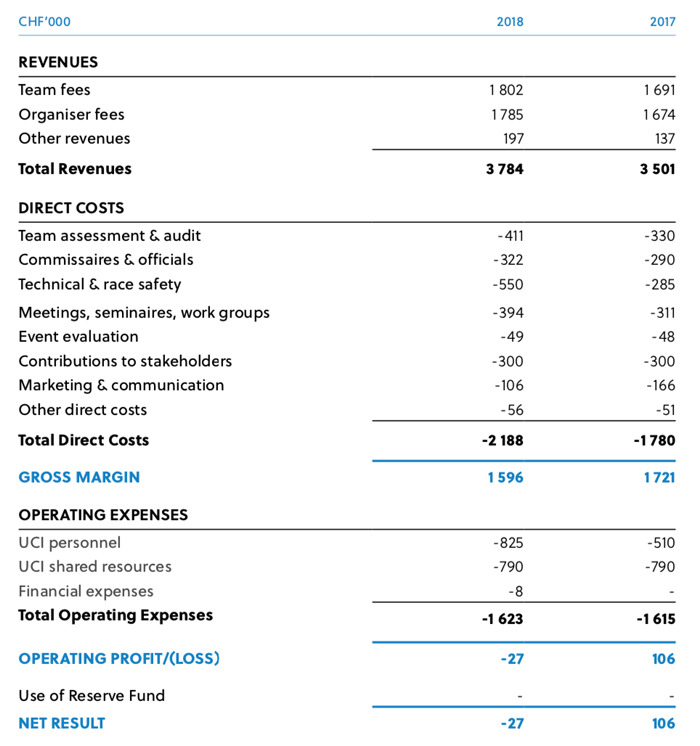 There are separate accounts for the World Tour which are jointly managed by the Professional Cycling Council, a committee. As you can see the teams and races contribute roughly similar amounts in fees, the CHF 1.8 million revenue from teams works out at about CHF 100,000 per team and in return the UCI supplies commissaires, audits team budgets to help ensure squads are viable and wages get paid. The increase in technical spending is linked to the UCI’s video commissaire with a dedicated truck that allows the UCI to review video evidence. Overall it’s not a money-spinner for the UCI. Update: as alert readers have pointed out the World Tour accounts look to have an error as the operating expenses for 2017 don’t add up.

Conclusion
Overall the UCI’s finances look healthy and the governing body keeps on with its central role. Glance and there’s a big fall in 2018 but this is partly explained by a dull change in accounting policy. The increased expenditure on development sounds good but needs to be watched to make sure spending doesn’t correlate with the electoral needs of the President. As ever the UCI is very dependent on the Olympics and Worlds, far more so than the road cycling scene where the World Tour and some particular races might get all the headlines but the UCI is not directly reliant on them.