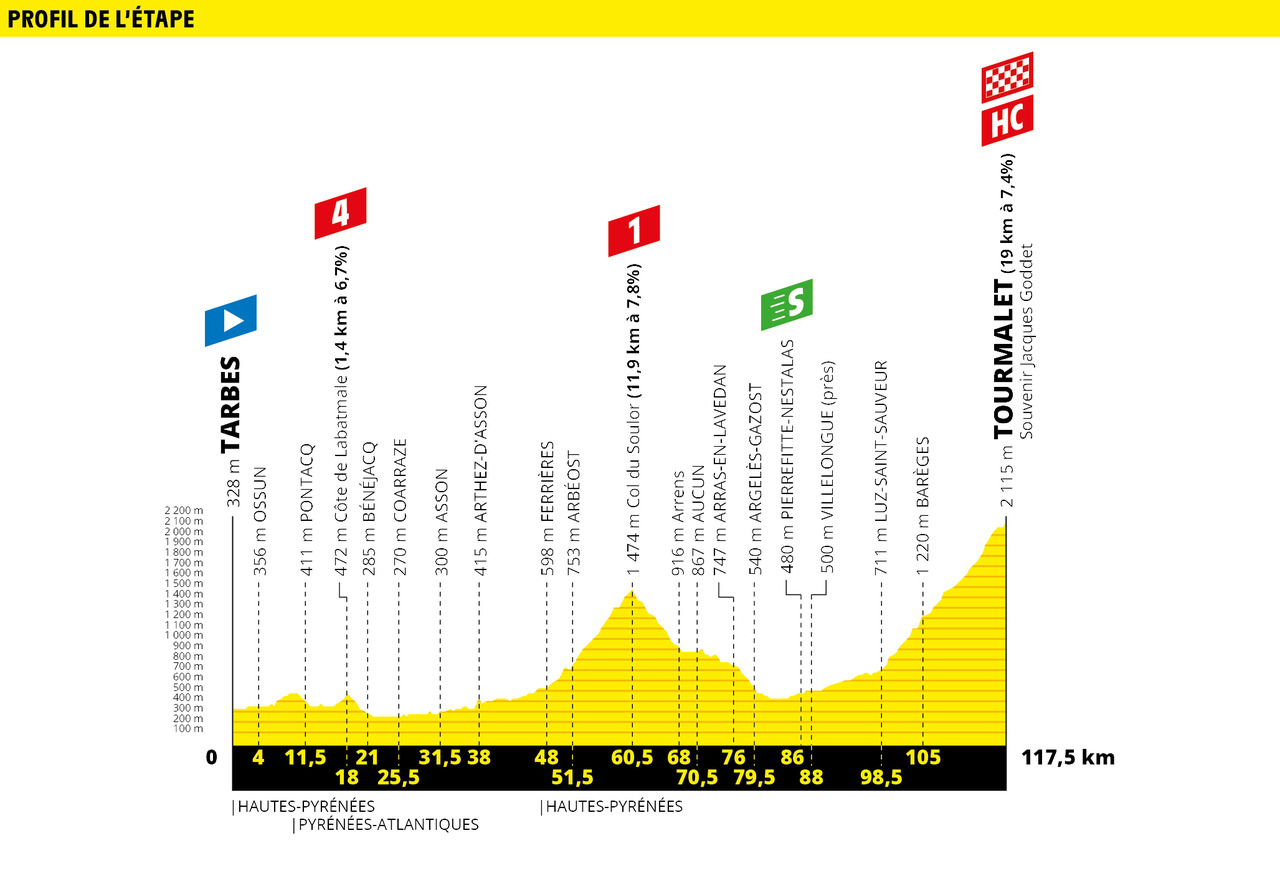 The Pyrenees and a summit finish on the Tourmalet, a long climb and a big test for Julian Alaphilippe. 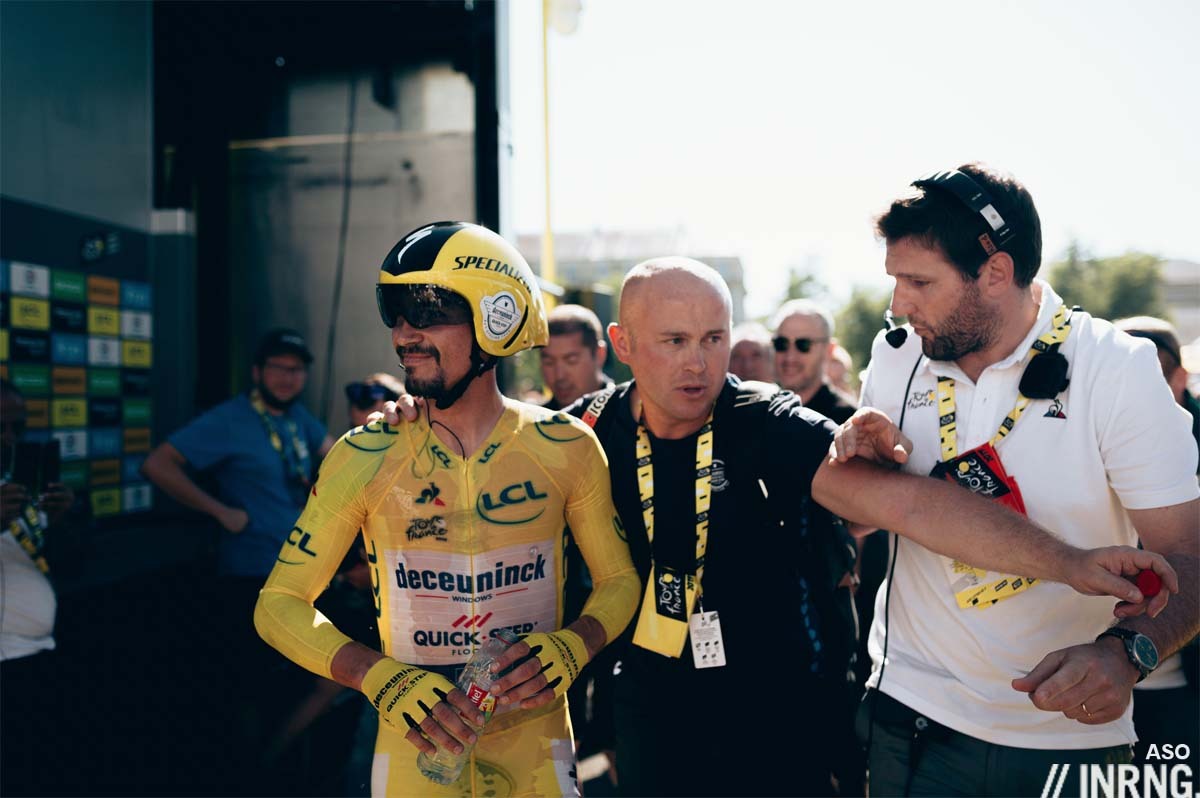 Stage 13 Review: an exciting day for a time trial with suspense right to the end helped by a course that mirrors the entire route so far, there’s always with a surprise. Thomas De Gendt set the bar high with a time that would last for hours. Once the GC contenders got underway Richie Porte then Steven Kruijswijk set the fastest times at the opening checkpoint and a sign that they’re competitive for the coming days. Thomas went through faster and Alaphilippe even faster. It set up a lively finish, you’d think Thomas would take time on the less technical return to Pau but Alaphilippe matched him and then even gained time on the final ramp before the finish line, sprinting up in the big ring. Alaphilippe’s win is a surprise but not a shock, he’s won World Tour time trials before and is in form. He was even spotted in May on a recon ride of the course, as if he had private ambitions for the stage. Still to beat the specialists and hold off Thomas is a scenario you could imagine but it seemed unlikely.

Away from the match for the stage, Geraint Thomas had a good day. He might have been eclipsed by Alaphilippe but put over half a minute into Steven Kruijswijk who did a good ride. Rigoberto Urán, Richie Porte, Thibaut Pinot and Enric Mas all had a good day with the later taking the white jersey from Bernal. Meanwhile Nairo Quintana and Adam Yates had a tough time, losing about two minutes each which was a surprise for Yates especially. Wout van Aert and Max Schachmann both crashed out on the same corner and leave the race and it shows how hard they were trying to save time.

The Route: just 117.5km from Tarbes to the Tourmalet. It’s all on classic roads with the standard Soulor approach road via the climb at Labatmale and then the sharp climb at Arthez d’Asson, the Tour’s raced this many times before. These climbs barely register on the profile above but they count for the formation of an early breakaway as places where the elastic can be snapped. The road gets more and more narrow towards Ferrières at 48km and then the Col du Soulor begins.

The climb is 13km at 7.1% and there are no traps or hidden surprises, just a steady slope up which varies between 6-9% but without any abrupt changes as it climbs up the small road through woodland and then onto open pastures where, away from the tour, cattle and horses roam free. The descent is on a bigger road and well-known to the peloton before a 20km valley section. 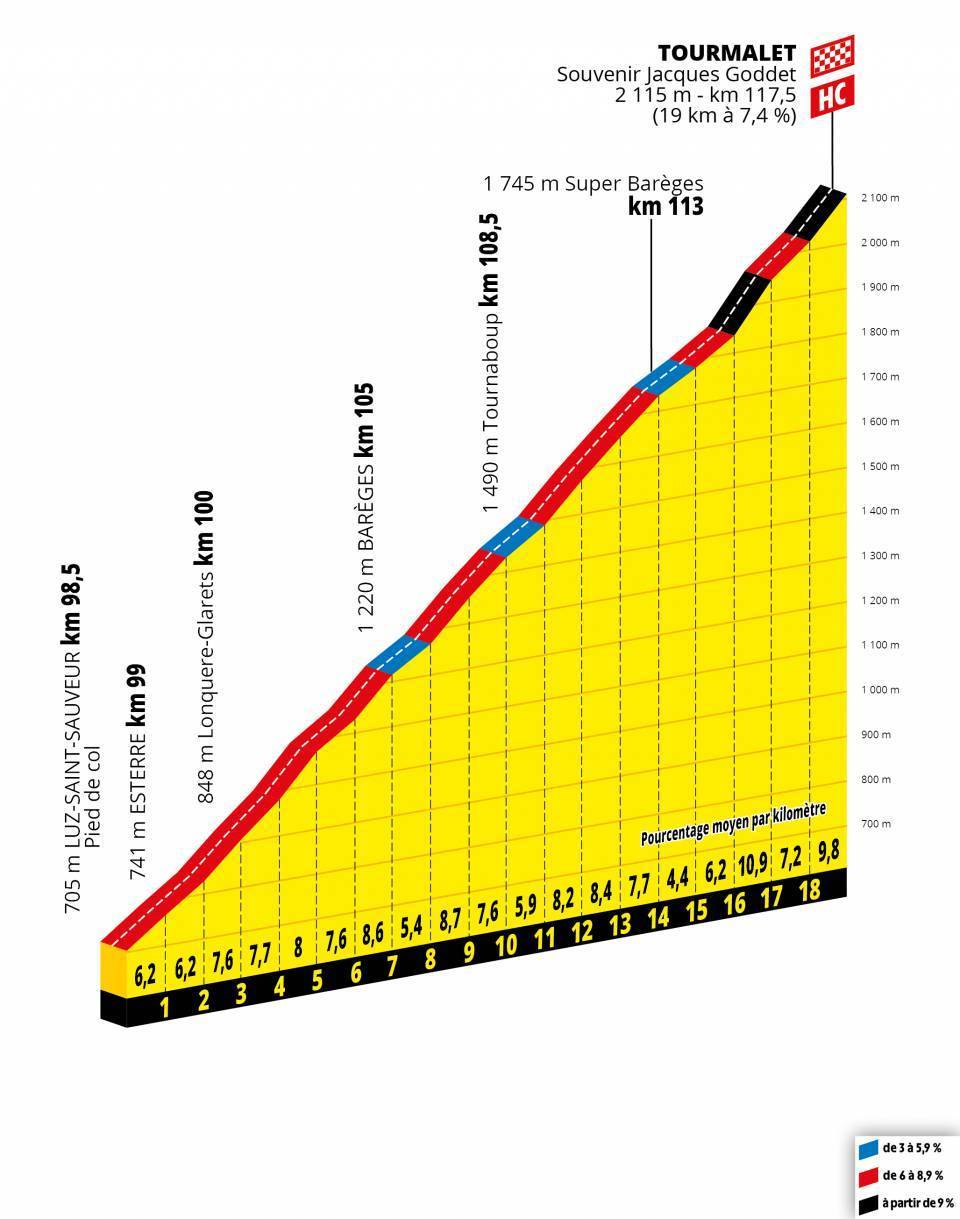 The Finish: the Col du Tourmalet’s the most frequently used pass of the Tour de France. This is the western ascent via Barèges, probably the more scenic side. The defining feature is the length, 19km which is long for any climb but in the Pyrenees it’s exceptional. It’s all on a regular road that’s wide and even for most of the way up. The first hard section comes with the hairpins before Barèges and from here on the climb feels harder. The final three kilometres have the hardest gradients and the finish is right at the pass itself after a ramp of 10% from the final hairpin.

The Contenders: there should be a fight to get in the breakaway but they’ll find it hard to stay clear, there’s not much time to build up a lead and surely Ineos are going to deploy their mountain train today on the approach to the Tourmalet and its early slopes. Still, George Bennett (Jumbo-Visma), Marc Soler (Movistar) and Dylan Teuns (Bahrain-Merida) fit the bill as strong riders who are down on GC and so have space but take your pick from others too.

Among the GC contenders Thibaut Pinot is great form and finally reaches the mountains he likes, he has a strong, cohesive team with David Gaudu an outsider for the stage win too.

Ineos need to put the pressure on today. Maybe they don’t take the race lead, maybe they do. They need to wear down Alaphilippe and one way to do this is to make the Soulor hard and then ensure the Tourmalet is a full 50-60 minute effort. Geraint Thomas is in good condition and even if Egan Bernal had a relatively poor day yesterday now he is on terrain to suit.

Several big names have now lost time on GC so if they move it’s not a priority to shut them down immediately. Mikel Landa and Alejandro Valverde (Movistar) come to mind, the same for Jacob Fuglsang (Astana), Dan Martin (UAE Emirates) and Richie Porte (Trek-Segafredo) while Emanuel Buchmann is sixth overall but probably not a priority to close down either.

Who’d bet against Julian Alaphilippe? Deceuninck-Quickstep aren’t set up to help him too far and Enric Mas must be itching to ride for himself. Alaphilippe’s having an extravagant Tour but today’s a completely new test with two long climbs, normally his weakness. Still he was first over the Tourmalet a year ago (from the breakaway) and he’s apparently lighter now but he’ll be on his limit. He can hold on and as said before here, if someone wants to take the jersey from him they’ll have to rip it off his shoulders, and the more he can hold on during the climb, the more he could even contend for the stage win given his punch. But this is “only” Stage 14 and there’s a lot more to come, he’s popular partly because he poses for so many photos, emerges early from the team bus to sign autographs and more and the long spell en jaune could add up and that’s before he starts trying to defend his jersey on long mountain passes.

Yellow story: how many yellow jerseys are given out each Tour? With 21 stages the first answer would be 21 but perhaps you’ve seen TV footage of the podium ceremonies and the backstage moments where the wearer signs other yellow jerseys. In total there are about 350 yellow jerseys a year which can go to team mates as gifts, sponsors as well as VIP guests and others than the rider. So an actual yellow jersey isn’t so exclusive, the Crédit Lyonnais lion mentioned the other day is more rare.

Weather: hot and sunny, 32°C in the valleys.

TV: the stage starts at 1.30pm CEST and finish is forecast for 5.15pm CEST / Euro time. Tune in early for the battle to get in the breakaway.